The Story of Gujari Mahal Palace at Hisar Firoza

Posted onOctober 11, 2018
It is said that Firoz Shah built the Gujari palace at Hisar for his Hindu queen Gujari Rani, a native of Hisar. The Gujari Mahal was built on a massive rectangular platform that can be approached by stairs. The palace consists of a baradari and a pavilion. The walls of the baradari are thick and sloping with 12 arched doorways. Red sandstone brackets can be seen above the arched doors. Inside the baradari are four old pillars of Hindu or Jain origin, which support a roof of domes. The raised platform has three underground chambers. The Gujari Mahal seems to have been built as an airy retreat away from the Hisar palace, for enjoying views over the gardens round.

The meeting of Firoz Shah with the Gujari Rani happened sometime before his accession to the throne of Delhi. Firoz was very fond of hunting. One day he set out for hunting and in the pursuit of a deer, became separated from his attendants. When the shades of evening began to fall, he looked out for some place to pass the night. He saw a village in the town of Tanesar and rode his horse towards it. Outsid the village, he saw a number of landlords seated. He got off his horse and joined them. He asked one of them to pull off his hunting boots. That man was a master of the science of interpreting signs and appearances; when his eye fell upon the sole of the prince's foot, he perceived the marks of royalty and the signs of imperial power. He informed his companions about this. 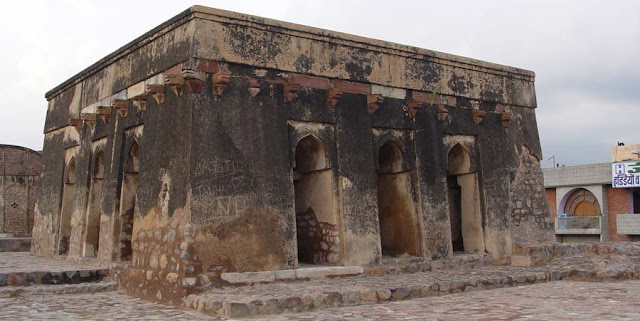 The chief men of that village were two brothers: Sadhu and Sadharan of the Gujari or Tank tribe (a class of Rajputs). Both of them did homage to the prince and requested him to do them the honour of passing the night there. Firoz assented. The wife of Sadhu was a clever woman. She proposed to her husband that although their guest bore upon his forehead the marks of dignity, still reliance should not be placed upon any man until his character has been tested. She advised him to entertain the guest with wine, so that the conversation might be free and unrestrained. The sister of Sadhu, who was very beautiful, was brought forward, and filling a cup handed it to Firoz. Firoz took it from her hand and took a sip. When he had drunk three cups, he showed a disposition to jest with the girl and appeared attracted by her charms.

When the wife of Sadhu saw that the prince was captivated, she approached him respectfully and engaged him in a conversation, she talked on various topics and finally brought the conversation round the genealogy and family of the prince. She said that if he could satisfy her as to his family, she would give him that girl in marriage. The prince told her that his name is Firoz Khan, the cousin of Sultan Muhammad Tughlaq, who had made him his heir apparent. The wife told Sadhu what she had learnt and said that fortune had smiled upon them. Sadhu straightaway gave his sister in marriage to Firoz. In the morning when Firoz departed towards the capital with his bride, the brothers Sadhu and Saharan also followed him 'like two shadows'. The Gujari Rani became Firoz's favorite wife. According to Agha Mahdi Husain, the village where the said marriage took place was no other than the Great Laras, which later became Hisar. Firoz Shah's eldest son Fath Khan was born to this Gujari Rani.

Foundation of the Muzaffar Shahi Dynasty of Gujarat:

Both brothers shortly became Musalmans. Sadharan got the title of Wajih-ul-Mulk. Zafar Khan was the son of the Wajih-ul-Mulk. When Firoz Shah Tughlaq (1351-1388) came to the throne in 1351, he promoted Zafar Khan and his brother Shams Khan his cup-bearers and raised them to the rank of nobles.

Firoz's son and successor Nasir-ud-din Mahmud II (1390-1394) made Zafar Khan the governor of Gujarat with the title of Muzaffar Khan in 1391. This Zafar Khan later became Sultan Muzaffar Shah I, founder of the Muzaffar Shahi dynasty of Gujarat. The first Sultan who ascended the throne was Tatar Khan titled Muhammad, son of Zafar Khan.
Share
Post a Comment
Labels#Delhi Sultans, #Monuments
Newer
Older