Posted onNovember 20, 2014
In 1712, after the death of Emperor Shah Alam Bahadur Shah (son and successor of Aurangzeb), followed the War for Succession among his sons, as before; and this time the Princes were Jahandar Shah, Azim-ush-shan, Rafi-ush-shan and Jahan Shah. Jahandar Shah, eldest son of Shah Alam Bahadur, came out to be successful in the war of succession, with the strong support of the Amir-ul-umara Zulfiqar Khan. On 29 March, 1712, when Jahandar Shah ascended the throne of Hindustan, he was fifty-two years old. Zulfiqar Khan was made his Wazir.

Muizz-ud-din Muhammad Jahandar Shah (1712-1713), eighth Emperor of the Mughal dynasty and thirteenth in descent from Amir Timur, was a weak and pleasure-loving king, who neglected the State affairs, and spent most of his time in merrymaking. However, it was a golden time for musicians, singers and dancers. 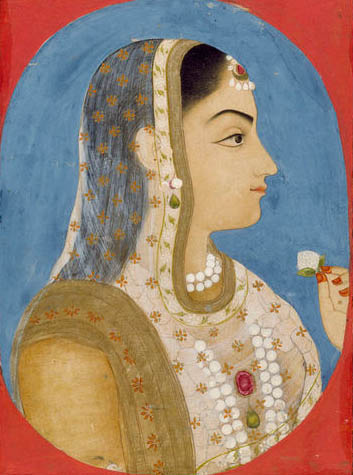 Lal Kunwar, a dancing girl at his court, was the favorite concubine of Jahandar Shah. She was a descendant of Miyan Tansen, the celebrated musician of Akbar's time. She was also deeply attached to Jahandar; and their relationship was so intense that she accompanied him in the battlefield also. After Jahandar's accession to the throne, she was made his Queen with the title of Imtiyaz Mahal (Chosen of the Palace). However, Zinat-un-nissa Begum, aunt of Jahandar, refused to acknowledge that. At Lal Kunwar's instigation, Jahandar stopped to visit his aunt, and also refused her invitation to an entertainment, since Lal Kunwar was not invited to it. Lal Kunwar's relatives and brothers were raised to dignity in their tribe and were also given high positions in the court replacing worthy and learned men. Moreover, an annual allowance of two crores of rupees was allowed for her household expenses, exclusive of clothes and jewels. Jahandar had no children by her. The popular belief was that, both of them, bathed every Sunday in the tank at the shrine of Shaikh Nasir-ud-din Oudhi, in hope of getting blessed with a child.

Stories or Rumours: There are many rumours regarding Lal Kunwar's influence over Jahandar Shah. Once Jahandar Shah and Lal Kunwar were watching what was going on upon the river from the roof of the palace. When a boat full of men crossed over, she told the Emperor, "I have never seen a boat-load of men go down". It is said that without any delay the Emperor ordered the boatmen to go with a boat-load of passengers; and she was gratified at the sight of those unfortunate drowning people struggling in the water. Another rumour was that Jahandar and Lal Kunwar used to visit markets in a cart; and during one such visit, both had drunken much that, on their return journey they became senseless and fell asleep. On reaching the palace, Lal Kunwar was taken to the palace by her female slaves. When the officers at the palace found that the Emperor was not with Lal Kunwar, they roused her up and inquired about him. When she realized that Jahandar was not by her side, she broke out into tears. People went out in all directions in search of the Emperor. At last they found him asleep in the bullock carriage.

Khushhal Khan, brother of Lal Kunwar, was appointed the Subadar of Agra. As there was a delay from the side of Zulfiqar in preparation of the documents, Lal Kunwar complained this to Jahandar. At Jahandar's enquiry, Zulfiqar replied, “we courtiers cannot do any business unless we get a bribe" and asked for a thousand guitar-players and drawing masters from Lal Kunwar as bribe. When the Emperor asked what he could want with them, Zulfiqar replied, "when musicians were sent to govern provinces, nobles must discard their weapons and learn to play on the guitar". This reply induced Jahandar to cancel the appointment.


Meanwhile, at Patna, Prince Farrukh Siyar, second son of the late Azim-ush-shan, was preparing war against Jahandar with strong support from the Sayyids of Barha, Abdullah Khan and his brother Husain Ali Khan. Hearing this news, Jahandar sent his son Prince Azz-ud-din against Farrukh Siyar, however, the Prince was defeated and fled to Agra. When Farrukh Siyar reached near Agra, his army did not number one-third of the army of Jahandar Shah. The nobles of the Kingdom in fact hoped for the success of Farrukh Siyar because of Jahandar's partiality towards low class people. Only Zulfikar Khan and Kokaltash Khan, his foster-brother, were loyal to Jahandar. No doubt, Jahandar Shah was defeated in the battle at Agra (10 Jan 1713); Lal Kunwar, who was also present in the battle, came to the rescue of her husband. She took him on her elephant and together they escaped to Delhi. The Emperor had shaved off his mustache and beard. At Delhi, Jahandar seek assistance from Asad Khan, father of Zulfiqar. But Asad Khan, in hopes of a reconciliation with Farrukh Siyar, took Jahandar as prisoner and confined him in the fort. Lal Kunwar was also allowed to join him. On seeing her, the Emperor exclaimed joyfully, "Let the past be forgotten, and in all things let us praise the Lord!"

Meanwhile, Farrukh Siyar ascended the throne on 19 Jan, 1713 and Prince Azz-ud-din was imprisoned. Asad Khan along his son Zulfiqar went to meet the new Emperor and offered their submission. Farrukh Siyar allowed Asad Khan to leave but ordered Zulfiqar to remain there. Afterwards, Zulfiqar was strangled on the orders of Farrukh Siyar.

Jahandar Shah and Lal Kunwar lived in confinement for a month. On 11 Feb, 1713, order was sent to murder Jahandar Shah. When the group of men entered the prison, Lal Kunwar screamed, clasped her lover and refused to let go. Violently forcing them apart, the men strangled Jahandar Shah. It is said that one of the men kicked him several times with his heavy-heeled shoes to finish him off. Finally Jahandar Shah was beheaded. Lal Kunwar was sent to Suhagpura where the widows and families of deceased Emperors lived in retirement. Jahandar Shah was buried at Humayun's tomb in Delhi. Thus, the brief reign of Jahandar Shah ended after eleven months. Prince Aziz-ud-din, one of his sons, later became the Emperor under the title of Alamgir II (1754-1759).
Share
2 comments
Labels#Mughal
Newer
Older