Facts About the Peacock Throne

Posted onJanuary 12, 2015
As we know, the Mughal Emperor Shah Jahan, creator of the world famous Taj Mahal, was a great lover of architecture. The Peacock Throne was built by him to display glory and splendor of the wealthy Mughal Empire. The throne was commissioned in 1628 and took seven years to complete. It was built under the supervision of Bebadal Khan, the goldsmith, at a cost of one crore of rupees. During the eighth year of his reign, the Emperor Shah Jahan sat for the first time on his throne at Agra (in 1635). 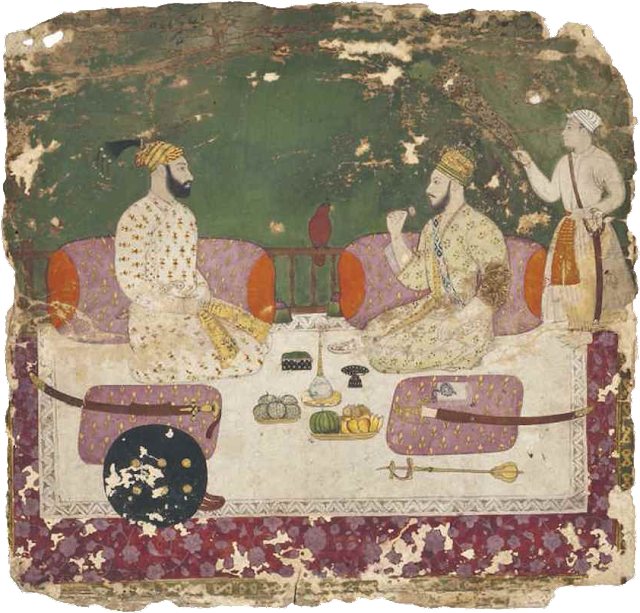 "Aurangzeb was seated on a throne in shape like a peacock; a marvelous piece of work made by King Shah Jahan". (Manucci - Storia do Mogor)


This beautiful jeweled throne was built in the shape of a peacock, in which pearls and precious stones were disposed in such a manner as to imitate the colors of the peacock (History of the Life of Nader Shah). The throne measured six feet in length, five in breadth and ten feet in height; and set with rubies, garnets, diamonds, pearls, emeralds and other precious jewels. Upon the throne there are three cushions. The middle cushion where the Emperor would sit is large and round, while the side cushions are flat. On the middle cushion there was set a ruby worth a lac of rupees, which Shah Abbas of Persia had presented to Emperor Jahangir. Shah Jahan got it as a gift from his father followed by his Deccan victory. The canopy was supported by twelve pillars. Inside the canopy, there was placed a poem by Haji Mohammad Jan in green enamel letters.

Tavernier (A French merchant) got the opportunity to inspect the Peacock Throne during the reign of Aurangzeb, which was then placed in the Diwan-i-Khas of Delhi Red Fort. According to his description, the base of the throne was supported by four bars and upon these bars are twelve columns that support the canopy on three sides. The ascend is of four steps. Inside of the canopy is covered with diamonds and pearls. Above the canopy there is a quadrangular shaped dome. There is a peacock with elevated tail made of blue sapphires and other colored stones. There is a large ruby upon his breast, from whence hangs a pear-shaped pearl. On both sides of the peacock there is a large bouquet of the same height as the bird consisting of several sorts of gold-enameled flowers. According to Bernier (A French traveler), there were two peacocks.

How India Lost the Peacock Throne: 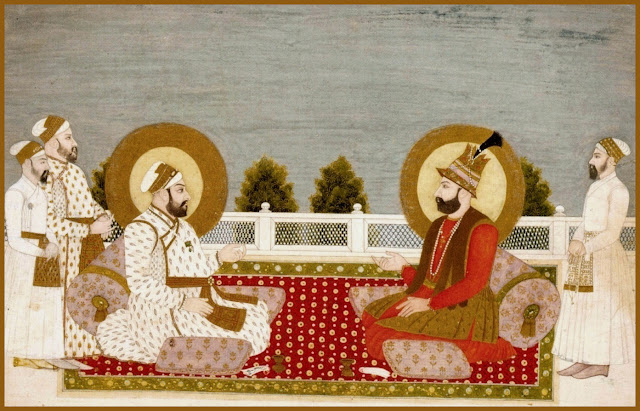 Mughal Emperor Nasir-ud-din Muhammad Shah (1719-1748), grandson of Shah Alam Bahadur, son of Aurangzeb, was a weak and pleasure-loving King and therefore got the nick name of 'Rangila'.


In 1737, when Nadir Shah Afshar (1736-1747), the King of Persia (now Iran), marched against the Afghans, he sent two ambassadors to the Emperor Muhammad Shah at Delhi with a request that he should prevent the Afghans of Persia from taking refugee in the Mughal dominions. Muhammad Shah agreed this though, took no action to keep his promise. During the siege of Kandahar, a great number of Afghans found shelter in the Mughal territories of Kabul and Ghazni without any obstruction from Mughals. When Nadir Shah learned this, he sent a third ambassador Muhammad Khan Turkoman to Delhi repeating the former message complained of the past conduct. Nadir Shah got no reply from the messenger moreover, the messenger himself did not return. In truth, the obligation of repelling the Afghans was beyond the capacity of Muhammad Shah's power. Muhammad's ministers were waiting to see the result of siege of Kandahar. They were thinking that in case if Shah Hussain Hotaki (Kandahar was at that time in the possession of Afghans) gained victory over Nadir Shah, then there would not be any need of writing a reply at all. Therefore Muhammad Khan Turkoman was not allowed to return. Nadir Shah wrote a letter to him inquiring the reason of delay and asked him to return immediately with a reply.

After capturing Kandahar from Shah Hussain Afghan, Nadir Shah marched towards Ghazni and Kabul and slaughtered the Afghans. Extremely annoyed at the detention of Mohammed Khan, he sent a messenger to Muhammad Shah with some messages accompanying ten horsemen, but when the messenger reached Jalalabad, he was attacked by robbers and the ten horsemen were put to death. The messenger somehow escaped to Kabul and informed Nadir Shah of what had passed. This can be considered as the cause of Nadir Shah's invasion of India. Nadir Shah moved towards Jalalabad and plundered the city. He then advanced towards Peshawar. Nasir Khan, the governor of Kabul was at that time in Peshawar. He offered a strong resistance however, did not succeed. Nadir Shah now crossed the river Attock and reached Lahore. Zakariya Khan, the governor of Lahore, offered his submission. Both governors later received marks of favour and restored to their respective provinces. By this time Muhammad Shah had received the news of capture of Kabul, Peshawar and Lahore. Now he learned that Nadir Shah was marching towards Shahjahanabad to conquer Hindustan. In order to oppose Nadir Shah, the imperial army lay encamped on the plains of Karnal (in Haryana, India).

The Battle of Karnal: Defeat of Muhammad Shah (Feb 1739): The two armies met at Karnal and in this battle, the Persians were victorious. When Muhammad Shah offered his submission, he was treated with respect and equality. Nadir Shah along with Muhammad Shah entered Delhi, where a reception was arranged for Nadir Shah. Nadir Shah declared that he would reinstate him on the throne of his ancestors, and that he would repair the late breach in their friendship, by maintaining a perpetual alliance with the Indian empire, and by giving him a sure support upon every exigence: but that he would stay some time at Dehli, to refresh his army after their long expedition. Muhammad Shah expressed his gratitude by surrendering the priceless treasures and jewels of his treasury to Nadir Shah. According to Jauhar-i Samsam, Muhammad Shah bestowed on Nadir Shah, with his own munificent hand, as a parting present, the Peacock Throne. While this peaceful meeting was being held in the palace, an unfortunate event happened outside!


Nadir Shah Sacks Delhi: When a rumour spread that Nadir Shah was dead, a riot broke out and many thousands of Persians were killed. Hearing this, Nadir Shah gave orders for a general massacre, which lasted half the day and nearly 100,000 Indians were slain. Delhi witnessed the cruelties of Nadir Shah 341 years after Timur's invasion (Timur invaded Delhi and massacred her inhabitants in 1398). According to Tazkira, the Chandni Chowk, the fruit market, the Daribah bazar, and the buildings around the Masjid-i Jama were set to fire and reduced to ashes. Muhammad Shah begged for the pardon of innocent people. Nadir Shah accepted his request and ordered to stop the massacre, but ordered to punish the riot leaders. Two nobles, who had caused this riot, were pursued and put to death.

Nadir Shah Collects Immense Treasures: Nadir Shah now took possession of the imperial treasures: nine other thrones, gold and silver plates, precious stones, jewels, cannons, weapons, furniture, elephants, camels, horses as well as skilled artisans. He collected money and valuables from the principal nobles as well. Prince Nasru-llah, second son of Nadir Shah, married a daughter of one of the grand-children of Aurangzeb. Nadir Shah had spent nearly two months in Delhi. Before leaving India, he reinstated Muhammad Shah as the Emperor of India and with his own hand placed the crown on Muhammad's head. At this darbar, he held an assembly of ministers and gave them the most salutary advice for the welfare of their country, enjoining them to obey in every respect the commands of their present sovereign. As a tribute, Muhammad Shah made over to him the territories westward of the river Attock (that included Kabul, Gazni, Peshawar, Bhakkar, Thatta etc). Thus Muhammad Shah became the last Emperor to sit on the Peacock Throne.

Where is the Peacock Throne now?


Nadir Shah carried the Peacock Throne to Persia along with other immense treasures from India. It is said that he was very fond of this throne and had made an exact duplicate of it with other jewels. Nadir Shah was assassinated on June 20, 1747 by Kurd rebels at Fathabad in Khorasan. The so-called Peacock Throne at Tehran is probably not the original Mughal Peacock Throne. According to Khwaja Abdul Kareem, "After the death of Nadir Shah, his nephew Aly Kuly Khan got possession of the Peacock Throne, and other riches, which Nadir Shah had deposited in Kelat". From Fraser's book, we have this information about the Peacock Throne: An old Kurd told Fraser that, "Money and jewels were unknown among us until the days of Nadir; when that king was murdered, and his camp plundered, the Peacock Throne and the tent of pearls fell into our hands, and were torn in pieces and divided on the spot, although our chiefs themselves little knew their value; many of us threw away the pearls as useless, and our soldiers, ignorant of the value of gold, offered their yellow money in exchange for a lesser quantity of silver or copper". According to Curzon, the original Peacock Throne of Nadir Shah (i.e. the survivor of the two facsimiles) was discovered in a broken-down and piecemeal condition by Agha Mohammed Shah, who extracted it along with many other of the conqueror's jewels by brutal torture from his blind grandson Shah Rukh, and then had the recovered portions of it made up into the throne of modern shape and style, which now stands in the Tehran Museum of Iran.

The Life of Sheikh Mohammed Ali Hazin Written by Himself
History of the Life of Nader Shah, King of Persia by William Jones
Taverniers Travels In India
Persia and the Persian Question by George Nathaniel Curzon
Narrative of a journey into Khorasan, in the years 1821 and 1822 by James Baillie Fraser
Share
4 comments
Labels#Mughal
Newer
Older