Timur and His Descendants

The name "Timur" is Turkish, which means iron. Timur, the Turkic conqueror of Central Asia, belonged to the Barlas tribe of the Mongol origin. Timur himself was a direct descendant of Genghis Khan, the Mongol conqueror, through his second son Chagatai Khan. Timur was born on 9 April, 1336 at Shahr-i-Sabz in Uzbekistan. A wound in Timur's right leg left him lame for the rest of his life. That's how he got the nick name of Timur the Lame. Timur died on 18 February, 1405 at Otrar in Kazakhstan and is buried at Gur-e Amir in Samarkand, Uzbekistan. 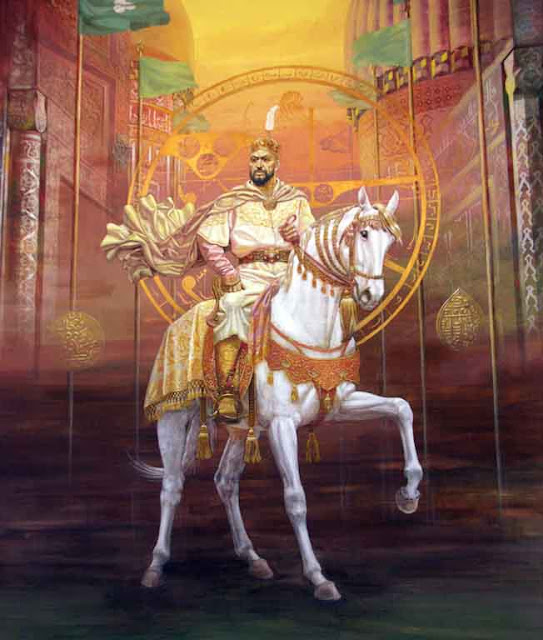 Timur was the founder of the Timurid dynasty in Samarkand that included Transoxiana, Herat, Khorasan, Iran, Iraq, Azerbaijan, Egypt, Syria etc. However, his descendants were not powerful as their ancestor; as they could not control the vast empire. Timurid power in Samarkand came to an end with the advent of Uzbeks. In India, the Timurid Empire was re-established as the Mughal Empire by Babur, one of Timur's descendants. Timur wrote his Memoirs (Mulfuzat Timury) in Chaghatai Turki, which was translated into Persian for the Emperor Shah Jahan. 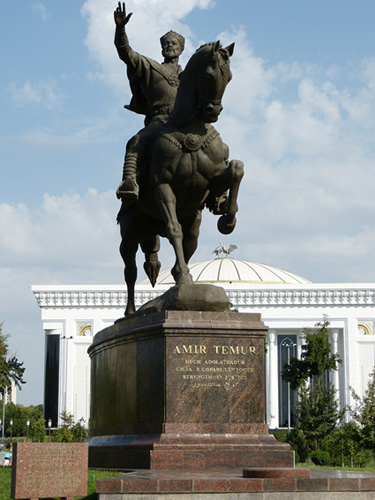 Timur's Invasion of India (1398): It is clear that Timur had no intention to rule Hindustan. Timur writes in his Memoirs, "My great officers told me that the inhabitants of Hindustan were infidels and unbelievers. In obedience to the order of Almighty God I determined on an expedition against them". At that time Prince Muhammad Sultan (one of Timur's grandsons) supported him by saying that, "The whole country of India is full of gold and jewels, and in it there are seventeen mines of gold and silver, diamond and ruby and emerald and tin and iron and steel and copper and quicksilver, etc. and of the plants which grow there are those fit for making wearing apparel, and aromatic plants, and the sugar cane, and it is a country which is always green and verdant, and the whole aspect of the country is pleasant and delightful. Now, since the inhabitants are chiefly polytheists and infidels and idolaters and worshipers of the sun, by the order of God and his prophet, it is right for us to conquer them". 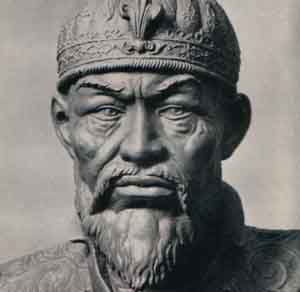 Timur invaded India during the reign of Sultan Mahmud Tughlaq (1394-1413) of Delhi Sultanate. The political condition of Delhi at that time was very weak. After the death of Firoz Shah Tughlaq in 1388, the Tughlaq dynasty had virtually came to an end. Firoz was succeeded by one of his grandsons Ghiyas-ud-din Tughlaq II (1388-1389) in 1388. Ghiyas-ud-din was followed by Abu Bakr Shah (1389-1390), another grandson of Firoz. Abu Bakr was succeeded by Nasir-ud-din Mahmud II, who was a son of Firoz Shah (1390-1394). Sultan Mahmud succeeded his father Nasir-ud-din Mahmud II in 1394. He remained as a nominal ruler while the real power was in the hands of two brothers Sarang and Mallu Khan. Timur crossed the river Indus, captured Multan and advanced towards Delhi. Sultan Mahmud was defeated and fled to Gujarat with his wazir Mallu Khan. Timur massacred 100,000 Indians and sacked Delhi. After fifteen days' of stay, Timur returned to Samarkand with a large booty along with 120 war elephants. On his way back, Timur conquered Meerut, Hardwar, Kangra and Kashmir.

Timur was also a great builder. It is said that whenever he conquers a country, he would took with him the artisans, sculptors, stone-masons, mosaic-workers, weavers and other craftsmen of that country to his capital. In this way he had the most beautiful buildings erected at Samarkand. The Gur-i Amir Mausoleum was originally built as the burial place of Timur's favorite grandson, Muhammad Sultan (1375-1403). Timur was so much impressed by the Jami Masjid (in Firoz Shah Kotla, Delhi), built by Firoz Shah Tughlaq that he took with him the skilled craftsmen of Delhi to build a similar one at his capital. Thus he built the beautiful Bibi Khanum mosque with the loot that he took from India. But what about Delhi? After the departure of Timur, Delhi was in ruins. The Tughlaq dynasty was completely disintegrated. According to Ferishta, "The city of Delhi remained in a state of anarchy for the space of two months after the departure of Teimoor, during which time famine and pestilence prevailed". Before leaving India, Timur had appointed Khizr Khan as governor of Multan, who afterwards established the Sayyid dynasty (1414-1451). Though Delhi never recovered her glory until the arrival of Mughals.


II. Jalal-ud-din Miran Shah was the third son of Timur.

IV. Sultan Abu Said Mirza (1451-1469) of Timurid dynasty was the eldest son of Sultan Muhammad Mirza. He ruled Transoxiana, Kabul, Ghazni, Kandahar and Badakhshan. After Abu Said's death, the Kingdom was divided among his sons and Umar Shaikh got the area of Ferghana.

V. Umar Shaikh Mirza was the fourth son of Sultan Abu Said Mirza. He was the father of Babur. He ruled Ferghana in Uzbekistan.

VI. Zahir-ud-din Muhammad Babur (1526-1530) was the eldest son of Umar Shaikh Mirza. He became the ruler of Ferghana at the age of 12 in 1495. Babur captured Samarkand in 1497, but eventually lost both Samarkand and Ferghana. He captured Kabul in 1504 and Delhi in 1526. Unlike Timur, Babur established his empire in India, known as the Mughal Empire, which lasted until 1857. Babur was the first Mughal Emperor of India.