Posted onMay 20, 2015
"I was helpless in life and I am departing helpless. Whichever of my sons has the good fortune of gaining the kingship, he should not trouble Kam Bakhsh if the latter is content with the two provinces of Bijapur and Hyderabad. There is not, nor will there ever be any wazir better than Asad Khan. Dianat Khan, the diwan of Deccan, is better than other imperial servants. With true devotion entreat Muhammad Azam Shah, —if he agrees to the mode of partitioning the empire which was proposed in my lifetime, then there will be no fighting between armies end no slaughter of mankind. Do not dismiss my hereditary servants, nor molest them. The occupant of the throne should have one of the two subahs of Agra and Delhi, and whoever agrees to take the former (Agra) of these will get four subahs of the old kingdom — Agra, Malwa, Gujarat and Ajmir and the chaklas dependent on them, and four subahs of the Deccan, namely Khandesh, Berar, Aurangabad and Bidar and their ports. And whosoever agrees to take the latter (Delhi) will get the eleven subahs of the old kingdom— Delhi, Panjab, Kabul, Multan, Tatta, Kashmir, Bengal, Orissa, Bihar, Allahabad and Oudh."

Death of Aurangzeb and Events Thereafter:

Aurangzeb died at Ahmednagar on 21 February, 1707 (Maasir-i-Alamgiri and Muntakhabu-l Lubab). When Aurangzeb died, his eldest surviving son Mu'azzam entitled Shah Alam was the governor of Kabul. Azam Shah, also known as Shah-i-Ali Jah or Azam Tara (Aurangzeb's third son), was the governor of Malwa and Kam Bakhsh (youngest son of Aurangzeb), was the governor of Bijapur. Among all the sons of Aurangzeb, the most esteemed and loved was Azam Shah. When Azam Shah heard the news of death of his father, he claimed the throne and hastened to Ahmednagar. Most of the nobility had a real attachment to him, however, soon after his accession to the throne, the general opinion was changed. He treated the old nobility with contempt, and would say publicly that they were not fit for his service. His ill temper also offended the nobles very much. Moreover, he was jealous of his own son Prince Bidar Bakht, as Aurangzeb showed him great attention (The Prince Bidar Bakht was his grandfather's favorite. The Prince had been waiting for an opportunity to dethrone his father (Azam Shah) due to his bad conduct towards the nobles), It is said that Azam Shah did not care to pay his army. For this reason many soldiers of his army went over to Shah Alam.

Defeat and Death of Azam Shah: Munim Khan, the faithful minister of Shah Alam, already had made preparations for a campaign when he received information of the continued illness of Aurangzeb. Azam Shah now proceeded towards Agra to encounter Shah Alam. He took the short route to Agra, which was hilly and water-less; and his army suffered greatly from want of water. On his way to Agra, Shah Alam wrote a letter of expostulation to his younger brother and proposed an equal division of the empire as per their father's will. But Azam Shah replied that he would answer his brother on the following day in the field, and also added, "Two kings cannot be contained in one country, though ten poor men can sleep comfortably under one blanket". On June 10, 1707, a decisive battle was fought at Jajau, near Agra, and many men on the side of Azam Shah were slain. The Prince Bidar Bakht was killed by a cannon-ball. Many chiefs including Zulfikar Khan abandoned Azam Shah and took flight, when his defeat was certain (They had advised him to flee from the field, but Azam refused and said, "it is impossible for me to leave this field: for princes there is only the choice of a throne or a bier"). An arrow struck Azam Shah in the forehead and he died. Rustam Dil Khan immediately cut off Azam's head and carried it to Shah Alam. But, the compassionate Shah Alam, seeing the head of his brother, burst into tears. He received the Princes Bidar Dil and Said Bakht (sons of Bidar Bakht) and Ali Tabar (youngest son of Azam Shah), most kindly and embraced them. Shah Alam then ascended the throne of Agra, at the age of sixty-four, assuming the title of Bahadur Shah. 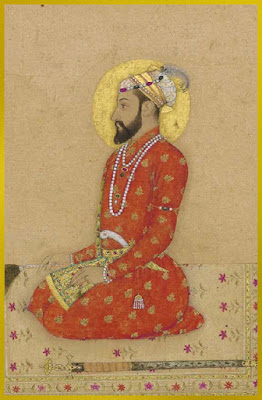 Qutb-ud-din Muhammad Mu'azzam afterwards, Shah Alam Bahadur Shah (also known as Bahadur Shah I), was born on 14 October, 1643 at Burhanpur, to Aurangzeb and his Rajput wife Nawab Bai (She was a Muslim Rajput; the daughter of Raja Taj ud-din Khan of Rajouri in Kashmir.). He was first of the later Mughals. In the words of Iradat Khan, Shah Alam was generous and merciful, of a great soul tempered with affability discerning of merit. All ranks of people obtained favours according to their merits. His great fault was over-generosity and an inability to say no to any one. According to Manucci, he could do no harm to anyone. A European traveler, who saw him about the year 1695 when he was 52 years of age, describes him as "tall and of a portly form, his beard thick, long, and beginning to grow white." (Later Mughals by William Irvine) 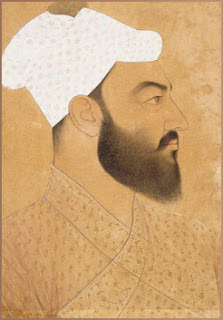 Defeat and Death of Kam Bakhsh: Upon the death of Aurangzeb, Kam Bakhsh had assumed the throne at Bijapur and struck coins in his own name. Before advancing towards Hyderabad, Bahadur Shah wrote him a kind letter: "Our ever-honoured father resigned to you only Bijapur; but we give you, in addition, Hyderabad. These two extensive countries, long famous for their great kings, producing a revenue more than half of Hindustan, we leave to you, without interference or reluctance, and shall esteem you dearer than our own children. Think not then of contention, nor consent to shed the blood of the faithful, nor disturb the repose of our government. If you give the ear of acceptance to this advice, we will farther confer upon you the nizamut of Deccan, if agreeable to you; and, after visiting the sacred tomb of our father, we will return to Hindustan." To this, Kam Bakhsh wrote a provoking reply. Bahadur Shah marched against him and defeated him at Hyderabad in January 1709. Kam Bakhsh who was badly wounded, taken as prisoner with his two sons. Soon he expired.

The Rajputs: Ajit Singh (son of Maharaja Jaswant Singh of Jodhpur) and Durga Das made alliance with Raja Jai Singh of Amber and Maharana Amar Singh of Mewar, against the Mughals. But on account of the Sikh rising in the Punjab, Bahadur Shah was compelled to make peace with them.


The Sikh Uprising and Banda Bahadur's Rebellion (1710-1716): Guru Gobind Singh, the last Guru of the Sikhs, was assassinated by an Afghan in 1708. When this news reached Punjab, Banda Bahadur, a leader of the Sikhs, declared that the Guru had come to life again in his body for the purpose of taking revenge. He became famous for his spiritual illuminations and miraculous powers. A large number of people belonging to the class of sweepers and tanners, banjaras and other low castes became his disciples. They ravaged the township of Sadhaura and killed the Muslim inhabitants. After killing Wazir Khan, the faujdar of Sirhind, they collected a large booty and plundered many other settlements and public edifices. Bahadur Shah marched against the rebels and captured many Sikh strongholds like Sadgaura, Sirhind and Lohgarh, however, Banda Bahadur escaped to the hills.

The Khutba Riot at Lahore: Bahahdur Shah was a Shia by faith and ordered that the word wasi or heir should be inserted in the khutba (the public prayer during Fridays). The Emperor faced strong opposition from the religious leaders of Lahore (who were all Sunnis) and was obliged to allow the recitation of khutba in its usual form.

Illness and Death of Bahadur Shah: About the middle of January, his health failed. He spent the last days of his life improving the garden of Shalimar. After the short reign of four years and two months, Bahadur Shah died on 27 February 1712 at Lahore and was buried near the shrine of Qutb-ud-din Bakhtiyar Kaki at Mehrauli, Delhi. The Emperor was seventy years old. He was succeeded by his eldest son Jahandar Shah in 1712.

Aurangzeb's eldest son, Muhammad Sultan died in Dec 1676 and, Akbar, his fourth son, died in March 1706 (during the life-time of their father).

Prince Muazzam was imprisoned by Aurangzeb in Feb 1687, and finally released in May 1695. It is said that the Prince had been deluded by some promise of Abu-l Hasan Qutub Shah, the ruler of Golconda, during the siege of Golconda, and some of his written communications fell into the hands of Aurangzeb.

Muhi-ul-millat, a grandson of Kam Baksh, was raised to the throne under the title Shah Jahan III in Dec 1759.

During the reign of Farrukh Siyar (son of Azimu-sh Shan), Banda Bahadur was finally captured and executed with his followers (June 1716). Rafi-ud-Darajat and Rafi-ud-daulah entitled Shah Jahan II, were the sons of Rafiu-sh Shan. Muhammad Shah was the son of Khujista Akhtar Jahan Shah. Aziz-ud-din entitled Alamgir II was the son of Emperor Jahandar Shah.