Posted onOctober 30, 2015
Maharana Sangram Singh (1508-1527), popularly known as Rana Sanga, was the great Rajput leader of Mewar (in Rajasthan, India). He was the third son of Maharana Raimal and his queen Rani Ratan Kanwar. Rana Sanga ascended the throne of Mewar on 4th May, 1508, at the age of 27, after the death of his father Rana Raimal and his two brothers Prithviraj and Jaimal. During Sanga's reign, the prosperity of Mewar reached her peaks. It should be noted that he was the most powerful ruler of Northern India before the arrival of Babur. 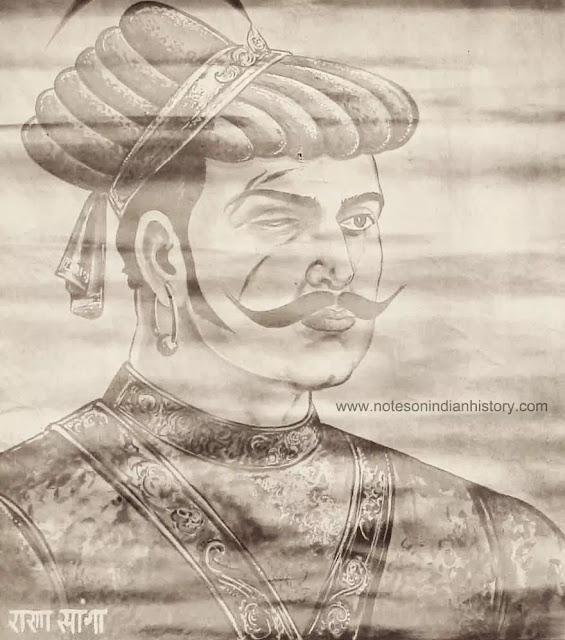 Year 1512 - Rise of Medini Rai: Soon after his accession to the throne of Malwa, Sultan Mahmud Khilji II (1512-1534) had to face many rebellions from his nobles. At last, he fled from Mandu (the capital of Malwa). The nobles then placed the crown on the head of his younger brother Prince Sahib Khan. During this time Medini Rai, a powerful Rajput chieftain of Malwa, came to the aid of the Sultan. The Rajputs under Medini Rai laid siege to the fort of Mandu and defeated Sahib Khan's forces. Sahib Khan fled and took refugee with Sultan Muzaffar Shah II of Gujarat (1511-1526). Sultan Mahmud thus regained his kingdom and Medini Rai became his chief minister.

Year 1512-13: Muhammadan historians states that Sultan Mahmud Khilji was only a nominal ruler while the whole power of Mandu fell into the hands of Medini Rai. Jealous of the increasing power and influence of Medini Rai, some nobles began to intrigue against him; and Bohjat Khan, the governor of Chanderi, invited Prince Sahib Khan from Gujarat to head the rebellion. He also wrote a petition to Sultan Sikandar Lodi of Delhi (1489-1517) and Sultan Muzaffar Shah of Gujarat stating that, "the Rajputs had gained an alarming ascendancy over the Mohammedans in Malwa and Medini Rai had virtually become master of the country. He also persuaded the Sultan to kill the faithful officers of the State" and appealed for help. Sikandar Lodi assisted him with 12,000 cavalry; in fact Sikandar Lodi was attempting to get Malwa for himself. On reaching Chanderi, Sahib Khan was crowned the King of Malwa, under the title of Sultan Muhammad, by the rebels. Sultan Muzaffar also sent a large army to help the rebels. Medini Rai accompanied by Sultan Mahmud marched against the forces of Gujarat, which was advancing to Mandu with great speed. the Gujarati forces were defeated and retreated to Ahmedabad. Sultan Mahmud now proceeded to Chanderi against the forces under Bohjat Khan. Unable to withstand the large army of Sultan Mahmud and being unable to spare more troops at the time, Sikandar Lodi recalled his forces to Delhi. Deprived of all hopes of assistance, both Sahib Khan (Sultan Muhammad) and Bohjat Khan sued for peace, which was granted.


Year 1517: Some nobles poisoned Sultan Mahmud's mind against Medini Rai. It is said that he removed all the Muhammadan nobles and replaced them with the Hindus in government offices. He put to death the Sultan's attendants one by one. As a result of this, Sultan Mahmud sent his attendants to assassin Medini Rai, but did not succeed. Many Rajputs were also killed. When the Rajputs assembled against the Sultan, Medini Rai sent word to the Sultan that he was ready to submit to any punishment which the King chose to inflict, rather than head an army against him. Convinced of Medini Rai's faithfulness, the Sultan again received him into favour. However, again suspicious of Medini Rai's movements, Sultan Mahmud one night fled from Mandu and took refugee at Gujarat where he got assistance from Sultan Muzaffar (1517). It is said that when Sultan Mahmud fled, Medini Rai used to go into the darbar and vow that he had done nothing disloyal to Sultan Mahmud, or which ought to offend him and drive him from his country, "Write and ask him to take care of his country and appoint another wazir, for I am willing to be his slipper-bearer."

Year 1518: Sultan Muzaffar himself followed with his army to reinstate Sultan Mahmud on his throne. When Medini Rai realized that the Sultan still considering him as disloyal, after leaving his son Ray Rayan and many other Rajputs in the fort of Mandu, he went to Chittor (the capital of Mewar) and appealed to the Rana for aid. The Rana marched his army as far as Sarangpur (in Malwa) but decided to act as circumstances should require. On hearing of the arrival of the Rana, Sultan Muzaffar sent another force against him. Meanwhile, Mandu was besieged and nearly nineteen thousand Rajputs were slain. Many of them committed Jauhar and the fort of Mandu was taken (1518). Sultan Mahmud again assumed the throne of Malwa. On hearing the fall of Mandu, Rana Sanga retreated, but made over to Medini Rai the provinces of Chanderi and Gagrone. (Rana Sanga captured those provinces from Sultan Ibrahim Lodi when he defeated him in two successive battles. See below:)

Year 1519: The Battle of Gagrone -  Defeat of Sultan Mahmud Khilji II: Sultan Muzaffar returned to his country after leaving a force for the support of Sultan Mahmud. With help of that force, Sultan Mahmud invaded Gagrone and Bhim Karan, who was holding Gagrone for Medini Rai, was put to death. Rana Sanga advanced with a large army from Chittor and a great battle was fought. Mahmud's army sustained a complete defeat. When Sultan Mahmud fell wounded on the field, some soldiers informed the Rana, who came and raised him up respectfully, and carried him in his own palki to Chittor. After three months, when his wounds were healed, the Rana freed him and he was restored to his dominions. As a mark of subjection, the Sultan yielded to the Maharana as nazrana the jeweled crown and belt left as a family heirloom by Sultan Hoshang, the first king of Malwa. A son of the Sultan was also taken as a hostage to Chittor.

In 1514, after the death of Rao Bhim, the Raja of Idar, his nephew Rai Mal had ousted Bihari Mal, the son of Rao Bhim, and ascended the throne of Idar with the support of Rana Sanga. Displeased by this, Sultan Muzaffar sent the Nizam-ul-Mulk to drive out Rai Mal and re-establish Bihari Mal to the throne of Idar. Rai Mal fought with the Gujarati forces and was sometimes defeated, sometimes successful. At last he sought refuge in Bijanagar (1517).

Year 1520: A wandering singer observed in a counsel before the Nizam-ul-Mulk of Gujarat, "the Rana protects Rai Mal and you may stay a little time in Idar, it will eventually come back again into the hands of Rai Mal". The Nizam-ul-Mulk said, "What sort of a dog is the Rana, and how can he protect Rai Mal? Here I sit, why does he not come?". The man replied that he was coming soon, and Nizam-ul-Mulk said that if he did not come he would be no better than a dog; moreover, he called for a dog, and having had it tied up at the door of the darbar he said, "If the Rana does not come, he will be like this dog".

Year 1520-21: Conquest of Gujarat - Defeat of the Nizam-ul-Mulk: When Rana Sanga was informed of this news, he decided to punish the Nizam-ul-Mulk. He marched from Chittor and came to Bagar, near Idar, where he was joined by Rawal Udai Singh of Dungarpur, Rao Ganga of Jodhpur and Rao Viramdeva of Merta. Unable to oppose the Rana, the Nizam-ul-mulk fled to the fort of Ahmednagar. The Rana laid siege to Ahmednagar, sacked it and carried away captive all the inhabitants. He accepted tribute from Barnagar and plundered the town of Bisalnagar. After Sanga had returned to Chittor, Sultan Muzaffar built up a new army and sent them against Mewar. They advanced and reached the fort of Mandsaur in Malwa which belonged to the Rana. The Rana advanced from Chittor towards Nandsa and encamped there. Sultan Mahmud Khilji reached there with his forces to assist Sultan Muzaffar. All other Rajput chieftains of the country round went to the support of the Rana; thus on both sides enormous forces were assembled. Sanga was joined by Medini Rai and Raja Silhidi, the Tuar Chief of Raisen. Seeing the great forces on the Rana's side Sultan Mahmud came to terms with the Rana on the condition that the Rana gave up the Sultan's son who he held a prisoner. Thereafter he returned to Mandu.

With Sultan Ibrahim Lodi of Delhi:

Year 1518: The Battle of Khatauli: The Battle of Khatauli was fought between Rana Sanga and the Delhi Sultan Ibrahim Lodi at Khatauli in Gwalior. Many parts of Rajasthan were under control of Delhi. Rajputs gradually captured much territories including the strongest fortress of Ranthambore. Ibrahim Lodi decided to invade Mewar. In this battle, the Rajputs were victorious. A Lodi Prince was made prisoner by Rana Sanga, who was later released on payment of a large amount. In this battle, Sanga lost his left arm by a sword cut; an arrow made him lame for life. It was after long treatment that the Maharana's wounds were healed and he restored to health. Later in the same year, Sultan Ibrahim renewed his attack on Mewar and the two armies met at Dholpur. Ibrahim's army was once again defeated and fled. By this victory, most parts of Malwa fell into the hands of Sanga including Chanderi and Gagrone.

Do you know that great warrior of Mewar was 'in fragments'? One eye was lost in the broil with his brother Prithviraj*. During the battle with Ibrahim Lodi, Sanga lost his left arm and an arrow made him lame for life. There are more than eighty wounds from the sword or the lance on various parts of his body. Despite all this he fought great battles (The word Sangram means Battle). Let's discuss about the Battle of Khanwa (1527), which was fought between Rana Sanga and Babur, in another post.

*Once the three brothers: Sanga, Prithviraj, Jaimal and Suraj Mal, their uncle, decided to entrust their future to an omen. Hence they repaired to the adobe of the priestess of Charani Devi. Prithviraj and Jaimal entered first and seated themselves on a mattress. Sanga followed them and took his seat on the panther hide of the prophetess and Suraj Mal, with one knee resting thereon. When Prithviraj disclosed their purpose of visit, the prophetess pointed to the panther hide as the decisive omen of sovereignty to Sanga, with a portion to Suraj Mal. Prithviraj suddenly drew his sword towards Sanga, however, was saved by Suraj Mal. But during this event, Sanga was deprived of his one eye.

Rana Sanga's sons: Rana Ratan Singh, Vikramjit and Banbir were inefficient rulers. Rana Udai Singh resisted Akbar's policies, but when Chittor was attacked he himself left Mewar and retired to the new city of Udaipur. It was during his reign that Chittor was sacked for a third time. Maharana Pratap, Mewar's great hero, was Sanga's grandson. So it can not be say that Rana Sanga left no successor worthy of his name.

Prithviraj was poisoned by his brother-in-law and Jaimal was put to death by the father of his wife.

Medini Rai fought under Rana Sanga against Babur at Khanwa. Chanderi was afterwards besieged by Babur and Medini Rai along with the Rajputs committed Jauhar.

The History of India as Told by Its Own Historians; The Local Muhammadan Dynasties. Gujarat By Sikandar ibn Muhammad, ed. by Edward Clive Bayley, trans. by John Dowson

Maharana Sanga: the Hindupat, the last great leader of the Rajput race By Har Bilas Sarda