The Legend of Bhagmati, Queen of Muhammad Quli Qutub Shah

Posted onNovember 13, 2015
Some time ago I read an article on thehindu.com titled "Did Bhagmati really exist?". Bhagmati was the legendary queen of Muhammad Quli Qutub Shah (r: 1580-1611), the Sultan of Golconda. According to the heritage enthusiast Mohammad Safiullah, there is no substantial evidence to prove that Bhagmati ever existed! In this post we are examining both the legend and facts.

Muhammad Quli Qutub Shah was the fifth ruler of the Qutub Shahi Dynasty of Golconda, which is one of the five Deccan Sultanates. He is famous as the founder of Hyderabad (in Telangana, India).

The Legend of Hyderabad: According to legend, Bhagmati was a Hindu dancing girl belonged to the village of Chichlam. When he was a Prince, Muhammad Quli fell in love with her. Few years after his accession to the throne of Golconda, Muhammad founded a new city and named it Bhagnagar (or Bhagyanagar?) after her name (1589-1591). After her marriage with the Sultan, she was bestowed with the title of Hyder Mahal. Bhagnagar was then renamed as Hyderabad. 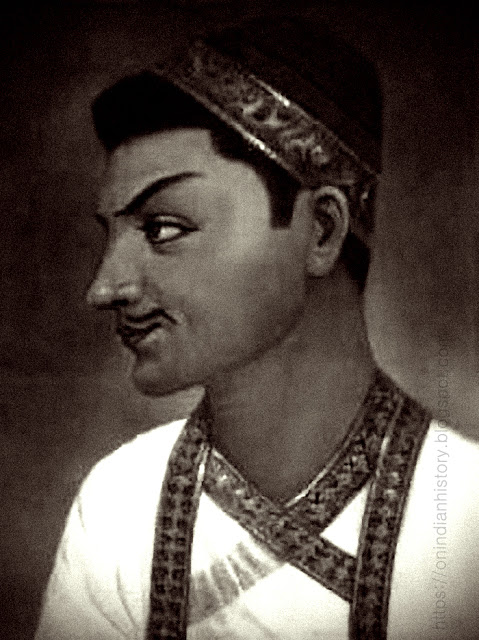 Let's us go through the history of the foundation of Hyderabad given by some historians of the Mughal period. These are the only contemporary records regarding Bhagmati:


Khafi Khan: Sultan Muhammad Quli Qutub Shah was very fond of his wife Bhagmati. At her request he built a city two kilometers distant from the Golconda fortress and gave the name of Bhagnagar. Some time after the death of Bhagmati, the name was changed to Hyderabad, but in the vernacular language of the people it is still called Bhagnagar. That woman had established many brothels and drinking shops in that place, and the rulers had always been addicted to pleasure and to all sorts of debauchery. 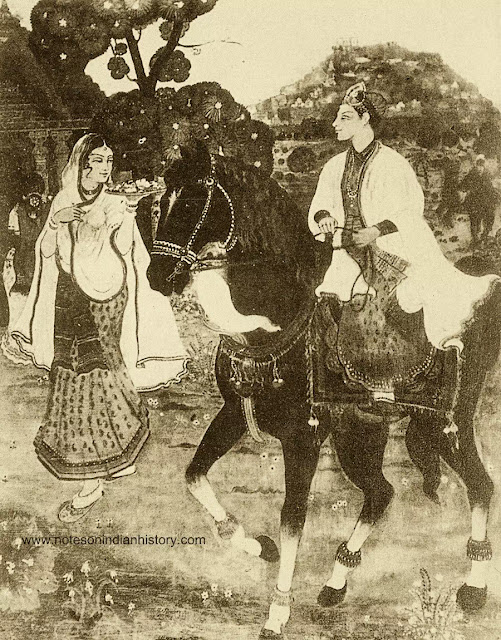 Ferishta: In the beginning of the reign of Sultan Muhammad Quli Qutub Shah, he became enamoured of a public singer named Bhagmati, to whom he assigned one thousand cavalry as an escort for her attendance. As the air of Golconda had become impure and unhealthy, he built a magnificent city at the distance of eight miles, which he called Bhagnagar after his favourite mistress Bhagmati. but this city has since received the name of Hyderabad, although one part of it still retains the former name of Bhagnagar.

Nizam-ud-Din Ahmad: Muhammad Quli succeeded his father. He became the lover of a prostitute of the name of Bhagmati; and having laid the foundation of a city, called it Bhagnagar. He had one thousand horsemen, as the retainers of that woman; and they always attended at her stirrups.

Anonymous chronicler of 'The History of Muhammad Quli Qutub Shah': In 1589, the King determined to remove the seat of his government, on account of the confined situation of Golconda, which from many causes, particularly the want of water, became extremely unhealthy. He accordingly fixed a spot situated at the distance of five coss from Golconda, on the banks of the river Musi, where he laid the foundation of a new city, which was called Bhagnagar (after his favourite mistress Bhagmati). But after her death he ordered it to be called Hyderabad, although for many years it retained its original name.

Tavernier, a European traveler: Bhagnagar is then the town which they commonly call Golconda, and it was commenced by the great grandfather of the King who reigns at present, at the request of one of his wives whom he loved passionately, and whose name was Nagar. It was previously only a pleasure resort where the King had beautiful gardens, and his wife often telling him that, on account of the river, the spot was suitable for building a palace and a town, he at length caused the foundations to be laid, and desired that it should bear the name of his wife, calling it Bhagnagar, i.e. the Garden of Nagar.


Saqi Mustad Khan: The city of Hyderabad is situated two kos from the fort of Golconda; it was founded by Muhammad Quli Qutb-ul-mulk, who was infatuated by the courtesan Bhagmati and named the city Bhagnagar after her. Afterwards it got its present name. Now that it has been annexed to the [Mughal] Empire, turned into an additional subah of the Deccan, it has been named Dar-ul-jihad Hyderabad.

Now that we have read the accounts of Mughal historians and Tavernier. Travelers like Francois Bernier and Jean de Thevenot also mention the name 'Bagnagar'. But, modern scholars are in the opinion that these accounts were based on hearsay only.

Historian H. K. Sherwani considers the entire story of Bhagmati as a pure legend: There is no mention of Bhagmati or Bhagnagar in the Qutub Shahi chronicles: Tarikh-i-Sultan Muhammad Qutb Shah, Hadiqat ul-Salatin, Hadaiqus Salatin or even in the Kulliyat of the Sultan himself. In the Kulliyat, the Sultan gives the names of seventeen of his wives yet there is not one ode in favour of Bhagmati who was supposed to be the most favourite. According to records the new city was named Hyderabad from the very beginning. There are coins in the Hyderabad museum which were struck at Hyderabad, but not a single coin which was struck at 'Bhagnagar'.

Dr. Parveen Rukhsana asserts that Bhagmati was a real historical character, "It is a fact that Bhagmati hailed from a locality of present Hyderabad which is named Hagalachinta where we still find persons who claim to be related to Bhagmati and the descendants from her other branches of pedigree". She quotes few lines from Faizi's Latifa-i-Faizi, which was written during the life time of Sultan Muhammad Quli Qutub Shah: "Bhagmati a seasoned flirt and beloved of Muhammad Quli Qutub Shah, who followed Shia faith, had laid out a settlement and constructed buildings at a place populated in the name of Bhagya Nagar after the name of the said Bhagmati". According to her, Bhagmati was the mother of Hayat Bakhshi Begum, "When Bhagmati gave birth to Hayat Bakhshi Begum she was conferred with the title of Hyder Mahal and thus simultaneously the name of the city was changed to Hyderabad".

Some historians assert that there is reference to a mistress of the name of Hyder Mahal in the Kulliyat. There is also a mention of Shahr-i-Hyder which literally can be interpreted as Hyderabad and it was perhaps named after that mistress who had been styled as Hyder Mahal in his poetry. Says Parveen Rukhsana, "In the literary compositions, very beautiful and splendid abbreviations and variations of the name of Bhagmati have been used by Muhammad Quli, wherever the word Bhag is used". She further adds that a building known as Hyder Mahal, situated in the present locality of Meti Kasher, was constructed by Muhammad Quli on the confirmation of the title of Hyder Mahal.

Now we can come back to Safiullah: "No concrete proofs suggest that the city was once called Bhagyanagar. The title Hyder, meaning lion, has never been given to any woman across the world", says Safiullah. As the Qutub Shahis were ardent Shias, according to him, the city was named after Hazrat Ali, the son-in-law of Prophet Muhammad, who had the title of Hyder. He further adds that Muhammad Quli Qutub Shah mentions many women in his Kulliyat and it was unfair to pick just one of them as his lover. As for Bhagmati, there are no manuscripts, inscriptions, contemporary miniatures or coins of that period mentioning her name. "There is no trace of her grave either. Even Chichlam, the place where she was supposedly born, has not been identified yet", argues Safiullah.

Ziauddin Ahmed Shakeb, an expert on Islamic and Indian art, observes, "Mir Momin, the prime minister of Muhammad Quli did not appreciate the closeness between the Sultan and Bhagmati. Therefore, he decided to ensure that Bhagmati's character is driven out of contemporary history. So much so that she did not even have a tomb built over her last remains".


P. Jogi Naidu, the retired deputy director of the department of archaeology, says, "Bhagmati's tomb is located in Talab Katta, on the eastern side of Charminar. The then Chichlam village (now known as Shah Ali Banda) was an important area of the Qutub Shahi dynasty and it was Bhagmati's birth place. Some people have removed all the inscription written on the tomb and do not allow visitors to view the grave. The Deccan School of Art from 1750 onwards represented her miniatures and painting and also depicted the events during that era".

The debate still continues: Let's wait for the discovery of any evidences that can prove the existence of Bhagmati or Bhagnagar.

Below is the miniature painting of Bhagmati of 19th century - Salar Jung Museum, Hyderabad: 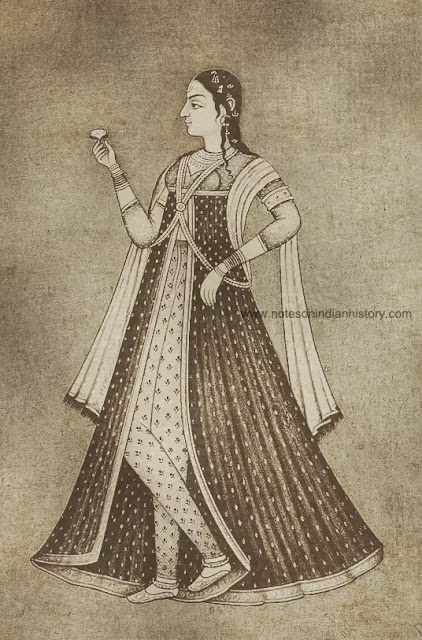 Kulliyat-e-Mohammad Quli Qutub Shah, edited and published with a preface by Syed Mohiuddin Qadri Zore, contains a number of poems written by the Sultan on the occasion of ceremonies and festivals such as Idd-ut-Fittar, Milad-un-Nabi, Mirag and Basant.

Soon after his accession to the throne, the Sultan married the daughter of Amir Joomla Shah Nizam Isfahany.