Mahmud's Conquest of the Somnath Temple

Posted onDecember 14, 2015
Yamin al-Daula Abi al-Qasim Mahmud ibn Sebuktigin better known as Mahmud of Ghaznavid Empire (998-1030) was the first king in history who assumed the title of Sultan. He made seventeen expeditions (some says twelve) to Hindustan (India) between 1000 and 1025. He invaded India for two main reasons: for spreading Islam and also for looting her wealth. During Mahmud's sixteenth expedition to India in 1025, he plundered the celebrated idol of Somnath. The word "Somnath" means master of the moon. The Somnath temple located in Gujarat, India, is one of the twelve jyothirlingas of Lord Shiva. In the temple, there were assembled priceless jewels. When Mahmud heard of the fame of the temple, he marched to Somnath in Oct 1025, and captured the place after slaying nearly five thousand Hindus. He broke the idol with his mace into pieces. Two fragments of it were taken to Ghazni (in Afghanistan); one was deposited at the threshold of the Jami Masjid of Ghazni and the other at the court door of his own palace. Two more fragments he sent to Mecca and Medina. By this expedition Mahmud gained incalculable wealth. 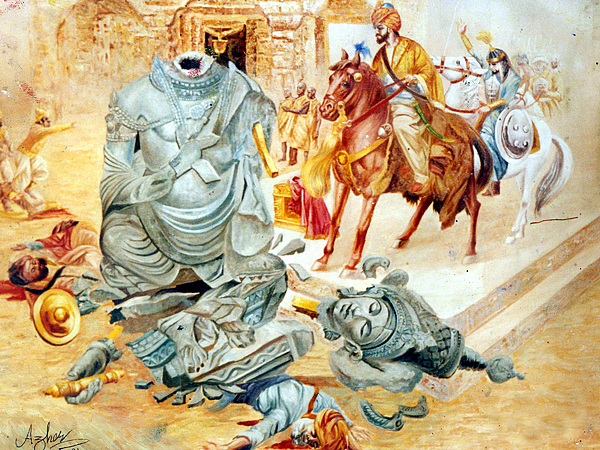 The idol of Somnath was the greatest idol of India. In the time of eclipses, crowd of Hindus came to visit the temple from every part of India. Hindus believed that when souls become separated from bodies they all go to do service to Somnath, where every soul is made over to the body most suitable to it. The ebb and flow of the tide was considered to be the worship paid to the idol by the sea. Everything of the most precious was brought there as offerings. The revenue of ten thousand villages was assigned for the support of the temple. The idol was daily washed with water from the river Ganges, which is sacred to the people of India (though the river is more than 1000 miles distant). More than one thousand Brahmans performed the ceremonies of the worship of the idol and attending the visitors. Three hundred barbers were employed to shave the heads and beards of the devotees. Five hundred dancing women and three hundred musicians were performed at the gate of the temple. It was customary for the kings of India to send their daughters for the service of the temple.


The edifice of the temple was built upon 56 pillars of teak wood that were covered with precious stones. The idol itself was in a chamber. It was cut out of solid stone, about five yards in height, of which two were buried in the earth. The shrine of the idol was dark but it was lighted by beautiful jeweled chandeliers. The top of the idol was decorated with precious stones and gold. Near the idol there was a chain of gold which weighed two hundred Indian mans and numerous bells were attached to it. Several persons were appointed to shake the bell at stated times during day and night and summon the Brahmans to worship. In the treasury of the temple there were many small idols of gold and silver.

When Mahmud reached Somnath, he saw 'a great fortress that a man would think that its summit touched the sky and the sea washed its walls'. On the battlements of the summit there was a crowd of Hindus seated in arms. They were crying with loud voices, "Somnath has led you here, so that with one blow he may slay you all, and he will now take his revenge for all the idols you have broken in Hindustan". Mahmud laid siege to the fort and when his troops cleared the battlements of the fort, the Hindus crowded into the temple prostrating themselves in tears before the idol and prayed for assistance. The troops of Mahmud suddenly mounted the walls of the fort shouting Allahu Akbar. The Hindus, urged by despair made so spirited a resistance that the Mohammedans were obliged to retire. On the third day Bhim Dev, the ruler of Guajarat, came up with reinforcements and the Muslim's strength failed. It is said that at that time Mahmud, in great grief went to a corner and prayed for his victory. He himself went to the center and slayed nearly five thousand Hindus. Seeing this cruel sight, people of the fort left fighting and went to the bank of the sea. Some of them escaped in a boat while others were killed by Mahmud's troops. Mahmud thus entered Somnath with his sons and a few of his nobles.

Here is the description of the idol of Somnath by Zakariya al-Qazwini in his book Asaru-l Bilad wa Akhbaru-l' Ibad: "Somnath is a celebrated city of India situated on the shore of the sea and washed by its waves. The idol was in the middle of the temple without anything to support it from below or to suspend it from above". Mahmud was very curious to know how the idol was suspended in air without any support. Later he find out a magnetic equilibrium acting upon it. "When the king asked his companions what they had to say about the marvel of the idol, several maintained that it was upheld by some hidden support. The king directed a person to go and feel all around and above and below it with a spear, which he did, but met with no obstacle. One of the attendants then stated his opinion that the canopy was made of load stone, and the idol of iron, and that the ingenious builder had skilfully contrived that the magnet should not exercise a greater force on any one side – hence the idol was suspended in the middle. Permission was obtained from the Sultan to remove some stones from the top of the canopy to settle the point. When two stones were removed from the summit, the idol swerved on one side; when more were taken away, it inclined still further, until at last it rested on the ground".


When Mahmud was about to destroy the idol, a crowd of Brahmans appealed to his nobles that if he would desist from the mutilation they would pay several crores of gold to the State treasury. Mahmud replied that if he do that people will call him "Mahmud, the idol-seller" whereas if he break it they will call him "Mahmud, the idol-breaker". When Mahmud broke the idol, so many jewels, diamonds, pearls and rubies came out of it's belly which exceeded the amount that the Brahmans had offered.

Death of Mahmud: Four years after this expedition, Mahmud breathed his last at the age of sixty three of stone in the bladder, in 1030.

After Mahmud's attack, the temple was rebuilt by Raja Bhim Dev Solanki of Gujarat. In 1297, Ala-ud-din Khilji invaded Gujarat and destroyed the idol. After the destruction of Somnath temple during Ala-ud-din's time, it was rebuilt again. Aurangzeb demolished the temple again in 1670.