Posted onSeptember 28, 2017
In the previous post we have seen how Muhammad Ghori defeated Prithviraj Chauhan in the 2nd battle of Tarain and captured Delhi, Ajmer, Hansi, Kohram, Samana and Sarsuti. After this conquest,  Ghori left his faithful slave Qutub-ud-din Aibak in charge of the fort of Kohram and returned to Ghazni after plundering the Siwalik hills which lies in the Northern side of India. In this post you can learn more about Muhammad Ghori and his slaves. Six of these slaves were: Taju-d din Yalduz, Baha-ud-din Tughril, Nasir-ud-Din Qabacha, Muhammad Bakhtiar Khilji, Shams-ud-din Iltutmish (3rd king of Slave dynasty) and Qutub-ud-din Aibak.

Rise of the Slave Qutub-ud-din Aibak to the Throne and Establishment of the Turkish Empire in Delhi:

Muhammad Ghori had no children except one daughter. So he took great pleasure in purchasing Turkish slaves and educating them. He once said, "Other monarchs may have one son, or two sons: I have so many thousand sons, namely my Turk slaves who will be the heirs of my dominions, and who, after me, will take care to preserve my name in the Khutbah throughout those territories". Qutub-ud-din was the most distinguished among them for his courage and liberality. Ghori had purchased him from some merchants of Ghazni at a high price. Since his little finger was broken he was called Aibak. During an entertainment at court, Ghori gave rich presents to his adherents and servants. Qutub-ud-din also received his share, but he divided his share among his companions and servants. When Ghori heard this, he asked Aibak the reason. He replied that 'all his wants were so amply supplied by his Majesty's bounty, that he had no desire of burdening himself with superfluities, provided he retained his sovereign's favour'. This reply pleased the Sultan so much that he immediately gave him an honorable post in the court and later he was appointed Master of the Horse (Lord of the Stables). 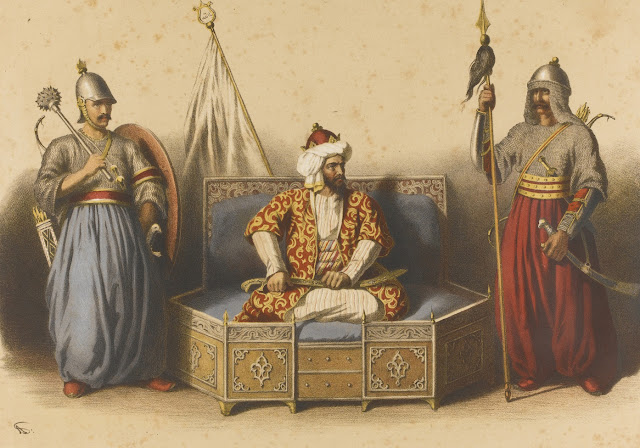 Ibn Batuta tells us an incident happened at Lahore which describes Ghori's favor towards Qutub-ud-din. After the capture of Lahore, Qutub-ud-din's power became considerable and some courtiers of Ghori poisoned his ears that Qutub-ud-din was in open revolt for becoming the king of India. When Qutub-ud-din got knowledge of this he hastened to Ghazni and presented himself before Ghori. Next day Ghori hid Qutub-ud-din out of the sight of the conspirers and enquired them about Qutub-ud-din. They stated that Qutub-ud-din was in revolt. "Then the Sultan kicked the foot of the throne, and clapping his hands, cried out "Aibak!" "Here am I",  Aibak replied and came forth before his accusers. They were confounded, and in their terror they hastened to kiss the ground. The Sultan told them, "I pardon you this time, but beware how you speak against Aibak again." He ordered Aibak to return to India, and he obeyed".

In the late 1192, Qutub-ud-din captured the fort of Meerut and then moved to Delhi; He captured Delhi after defeating the kinsmen of Govind Rai. The fort of Kol was taken in 1193. He made Delhi his capital and brought its surrounding districts under his control.

Battle of Chandawar (1193-94): Muhammad Ghori returned to India in 1193 and marched towards Kannauj with his army led by Aibak. Raja Jai Chand, the king of Kannauj and Banares, opposed him with a large army and 300 elephants. The battle took place at Chandwar (now Firozabad in Uttar Pradesh) in which Raja Jai Chand was defeated. When Jai Chand was about to retreat, Qutub-ud-din shot an arrow which pierced the Raja's eye and he died. Raja Jai Chand had used artificial teeth, which were fixed in by golden wires; after the battle, the Raja's body was identified 'by means of the golden studs with which his teeth, on account of extreme age, had been fixed in their sockets'. Muhammad Ghori then occupied the fort of Asni, where Jai Chand had laid up his treasure. He then marched towards Varanasi and broken idols of above 1000 temples. Ghori returned to Ghazni with immense treasure of Raja Jai Chand, and before his return, he conferred on Aibak the vice regency of India. Historians say that the country was subdued as far as the outskirts of China.

Battle with Hariraja (1194): Hariraja, brother of Prithviraj Chauhan, who had gone into rebellion expelled Prithviraj's son and captured Ajmer. Qutub-ud-din marched from Delhi against Hariraja and killed him. He then appointed a Musalman governor at Ajmer.

Baha-ud-din Tughril: In 1195, Ghori again returned to India and captured Bayana (Thangar) which he placed it under the command of Baha-ud-din Tughril. Afterwards he laid siege to the fort of Gwalior and left Tughril to continue the siege. Tughril built a new fort and constantly harassed the garrison of the Gwalior fort. The Raja of Gwalior in great distress sent an embassy to Aibak and agreed to surrender the fort to him. Aibak accordingly marched to Gwalior and took possession of the fort. Thus enmity rose between the two. Tughril died a short time afterwards.

In 1197, Rai Bhim Dev of Nahrwala with the assistance of the rulers of Chandravati and Nagore made an attempt to capture Ajmer and defeated Aibak. Ghori sent immediate reinforcements for his assistance and Nahrwala was captured. By the year 1202,  Aibak took the forts of Badaun, Kalpi and Kalinjar.

In 1203, Sultan Ghias-ud-din died and Muhammad Ghori succeeded him on the throne. He then divided his brother's dominions among his kins; Firozkoh and Ghor to Malik Zia-ud-din, son-in-law of his late brother Sultan Ghias-ud-din; Bust, Farah and Isfarain to Prince Muhammad, son of Sultan Ghias-ud-din; and Herat and its dependencies to Nasir-ud-din, the nephew of Sultan Ghias-ud-din. Ghori returned to Ghazni and marched an army against Khwarezm. Sultan Muhammad Khwarazm Shah applied to the Gurkhan of Qara Khitai for assistance. Many of Ghori's generals were slain in the following battle and Ghori was compelled to retire towards Balkh. However the Gurkhan of Qara Khitai and Sultan Usman Khan Samarqandi who had come for the assistance of Muhammad Khwarazm Shah, obstructed his passage. Ghori who was completely defeated, shut himself up in the fort of Andkhud and try to establish himself there. He saved his life and was allowed to return to Ghazni on paying a large ransom to Sultan Usman.

Ghakkar's Revolt: When Ghori was defeated by the Turks of Khita, it was reported all over the kingdom that he was slain. As a result enemies rose up and; in the neighborhood of Lahore the tribe of Ghakkars revolted and captured Lahore. After reaching Ghazni, Ghori marched towards Lahore to suppress the Ghakkar's revolt.  Aibak was summoned from Delhi. Shams-ud-din Iltutmish, another of Ghori's slaves, was also with him. The Ghakkars fought so valiantly that Ghori was compelled to retreat. Meanwhile Qutub-ud-din reached there with his army and started slaughtering the Ghakkars. The Ghakkars took to flight; many of them were slain and others committed jauhar. Lahore was recovered and Qutub-ud-din returned to Delhi. Ghori left Lahore to return to Ghazni but on the way he was assassinated near Dhamiak by some Ghakkars.

When Ghori died, the Turk officers desired Prince Mahmud, the son of Sultan Ghias-ud-din, to ascend his uncle's throne. However he preferred the throne of Ghor and Firozkoh. He then conferred Ghazni on Taju-d din Yalduz, and on Qutub-ud-din Aibak, the sovereignty of Hindustan. Thus Qutub-ud-din became master of all the Indian possessions of Muhammad Ghori. Qutub-ud-din came to Lahore from Delhi and sat on the throne of Hindustan; from that day commenced the first Muslim empire of Delhi; and was successively ruled by four other Muslim dynasties (the Khiljis, the Tughlaqs, the Sayyids and the Lodis), till the arrival of Babur.

Taju-d din Yalduz: Ghori had conferred on Yalduz the government of Kirman and Turan (in Sind). After Ghori's death, Yalduz ascended the throne of Ghazni and assumed the title of Badshah. When Yalduz marched against Lahore, Qutub-ud-din opposed him and defeated him, who then retired to Kirman. Qutub-ud-din took possession of Ghazni; for forty days he sat upon the throne of Ghazni spending his time in amusements and self-indulgence. He totally neglected the affairs of the state. Annoyed by his behavior, the people of Ghazni secretly summoned Yalduz, who returned with his army and surprised Qutub-ud-din. Qutub-ud-din was compelled to leave Ghazni and retired to Lahore. It's said that later he repented and became sensible of his duty.


Qutub-ud-din Aibak died falling from his horse while playing chaugan (polo) at Lahore. The period of his reign was 18 years; of which he was a Sultan for 4 years. His tomb is located at Anarkali Bazar in Lahore, Pakistan. Qutub-ud-din married a daughter of Taju-d din Yalduz. His three daughters were married to Nasir-ud-Din Qabacha (who married Aibak's eldest daughter but when she died he married the youngest one) and the second daughter to Shams-ud-din Iltutmish. Qutub-ud-din was the first Muslim king of India. He was called Lak bakhsh (Giver of Laks) due to his lavish generosity. Qutub-ud-din built the Jami Masjid (Quwwat-ul-Islam) at Delhi of which the famous Qutb Minar is a part. 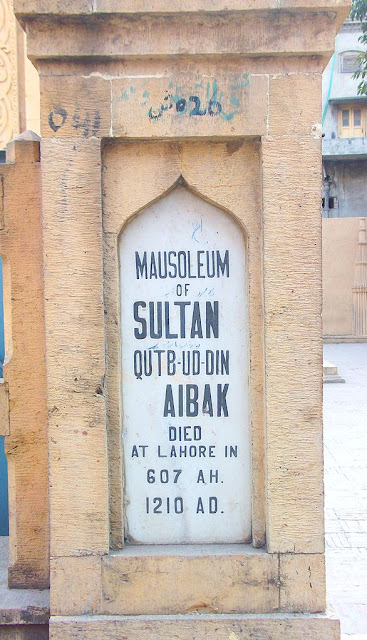 History of the Rise of Mahommedan Power in India by Ferishta

Taj-ul-Maasir of Hasan Nizami
Tabaqat-i-Akbari: A History of India from the Early Musalman Invasions to the Thirty-eighth year of the Reign of Akbar by Khwajah Nizamuddin Ahmad Translated By B. De
Share
Post a Comment
Labels#Delhi Sultans
Newer
Older