The First Mongol Invasion of India

Posted onMay 31, 2018
"If you join and obey us, your lives will be spared; if you do not, the fault is not with us; God only knows what may be the consequence..." (Genghis Khan's letter to the kings)

The first Mongol invasion of India took place in the reign of Sultan Shams-ud-din lltutmish. In 1221, the Mongols, under Genghis Khan, appeared for the first time on the banks of the river Indus.

Defeat in the Battle of Indus - Sultan Jalal ad-Din in India: 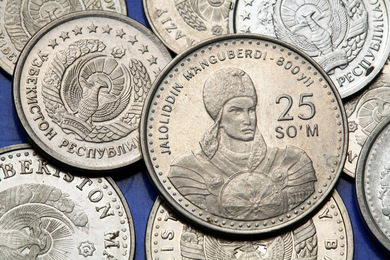 After the destruction of the Khwarazmian empire by the Mongols under Genghis Khan (also spelled Chengiz Khan) in 1220, Sultan Ala ad-Din Muhammad Khwarazm Shah fled and died some weeks later on an island in the Caspian Sea. His son Sultan Jalal ad-Din Mingburnu, also known as Jalal ad-Din Khwarazm Shah (1220-1231), was pursued by the Mongols from Khorasan to Ghazni. When he arrived at Ghazni, which his father Sultan Ala ad-Din, had bestowed upon him as an appanage, he was joined by the troops of his father. He was able to defeat the Mongols at Parwan. Finally Chengiz Khan himself marched against him, who wanted to capture him alive; Chengiz pursued him to the banks of the Indus. The Sultan was left between water and fire (the enemy); he prepared to give battle and in the Battle of Indus in 1221, Jalal ad-Din was defeated. In order to save their owner, he drowned his women in the river. He then sprang upon his horse, again charged the Mongols, and fought his way through them to the river, where he threw off his armour and all his ensigns of royalty, and plunged with his horse from a bank near twenty feet high into the stream, to the opposite bank of which his horse swam in safety. Chengiz Khan is said to have been so struck with Jalal ad-Din's gallant bearing, that he ordered that no one should draw a bow against him while he was in the river. Chengiz Khan and all the Mongols stood on the bank of the river and watched Jalal ad-Din dismount from his horse, take off his saddle, spread his saddle-cloth, arrows and tunic in the sun to dry them, empty the water out of his scabbard, fix his umbrella on the point of his spear and then sit down under the shade.  Chengiz Khan and all the Mongols put their hands to their mouths in astonishment. Chengiz Khan seized the collar of his garment and broke out into expressions of admiration, and turning to his sons desired them to take an example from Jalal ad-Din. He said to them, "Such a son as this is worthy to survive his father". However, he put to death the sons and followers of Jalal ad-Din. He halted at the river many days and directed divers to search for the treasures of the Sultan which had been thrown into the river. 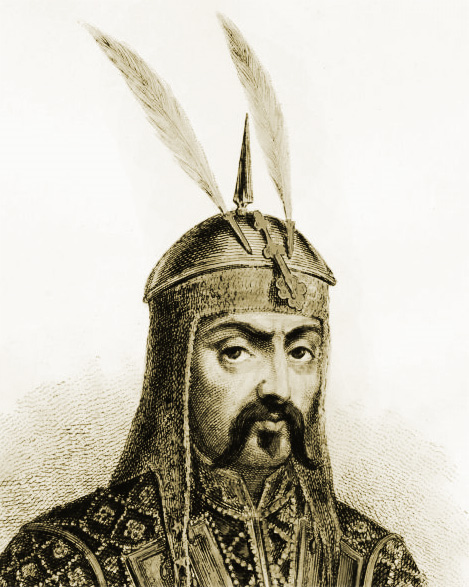 Chengiz Khan dispatched Durman Bakhshi and Bala Nuyan with a large army to Hindustan in pursuit of Jalal ad-Din. After crossing the river, they arrived at a fort which was held by one of the Sultan's officers. They captured the fort and ordered a general massacre of the inhabitants. Then they went towards Multan, but unable to withstand the excessive heat, the Mongols returned from Multan after plundering it. They continued their pursuit to Malikpur and the sea-side, and returning thence joined Chengiz Khan near Balkh.

What Happened to Jalal ad-Din: When the Sultan had escaped from the twin dangers of water and fire, he was joined by about ten persons who had also succeeded in crossing the river. He spent two-three days in the nearby forests, where fifty more men joined him. They made a night attack on a body of Hindus and carried off a considerable booty. Soon after certain intelligence was brought to him that two or three thousand Hindu troops were encamped in the neighbourhood. He attacked them and set up his own troops with arms and weapons. When the report of the strength of Jalal ad-Din was spread throughout India, a number of men from the hills of Balala and Nakala attacked him, who, successfully dispersed them. He afterwards received aid from several men, so that his forces now amounted to three thousand men. Intelligence of this gathering came to the knowledge of Chengiz Khan, who sent an immense army under Turtai to capture him. Unable to oppose the Mongol army, Jalal ad-Din fled towards Delhi with a view to get help from Shams-ud-din lltutmish, the Sultan of Delhi. The Mongols, on hearing of Jalal ad-Din's flight, returned after pillaging the confines of Malikpur. 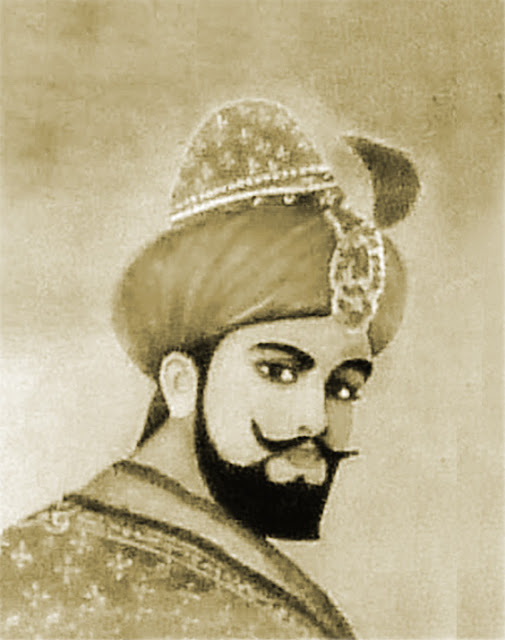 What lltutmish Had Done: On reaching the vicinity of Delhi, Jalal ad-Din deputed a messenger named Ainu-l mulk to lltutmish requesting a temporary residence in Delhi, "The great have opportunities of showing mercy, since it is evident in our relations with each other, that I have come to claim your protection and favour, and the chances are rare of meeting with a person of my rank on whom to bestow a kind reception. If the road of friendship should be made clear, and the ear of brotherhood should listen in our communications with each other, and if, in joy and affliction, aid and support be mutually afforded, and if our object and desires should be accomplished, when our enemies witness our alliance, the teeth of their enmity will be blunted". Sultan lltutmish, after receiving the message, was engaged for some time in deliberation. He received the ambassador with great distinction, but in his heart he was greatly alarmed, for like as the Khwarazm Shahis were afraid of the Mongols, so were the soldiers of Hind afraid of those of Jalal ad-Din. It is said that Iltutmish killed or poisoned Ainu-l mulk. He deputed a messenger with presents to Jalal ad-Din, but objected to comply with his demand for a place of residence, making false excuses. He made the following excuse that, the climate of Delhi is not favourable, and there is no tract suited to Jalal ad-Din; but if he wished, he would fix upon some place near Delhi where Jalal ad-Din might take up his abode, and that it would be made over to him as soon as it was cleared of rebels and enemies. Jalal ad-Din therefore returned to Balala and Nakala (or Lahore). Iltutmish thus saved the kingdom from the invasion of Chengiz Khan.

(On the contrary, according to Indian historians like Ferishta, Nizam-ud-Din Ahmad, Badauni and Minhaj al-Siraj, when Jalal ad-Din Khwarazm Shah came towards Lahore, lltutmish opposed and compelled him to retreat towards Sindh and Siwistan. In another place, Ferishta wrote that 'lltutmish determined not to permit so dangerous a person to remain in his dominions. He, however, sent some valuable presents to Jalal ad-Din; but declared that the air of India was so unwholesome to strangers, that he could not recommend any spot on which he might take up his residence'. Abul Fazl says that lltutmish was under the gravest apprehension, and could not venture to engage him. Abul Fazl also mentions the statement of some other authorities that, 'When the number of his followers amounted to a thousand, Jalal ad-Din marched towards Delhi, and sent a messenger to lltutmish desiring a post in his service. The latter prudently declined, he poisoned the messenger and send him valuable presents sped him towards Iran'.)


Jalal ad-Din & Nasir-ud-din Qabacha: Jalal ad-Din deputed his general Taju-d din Malik Khilj with a force to Salt Range and plundered the territories of Rai Sangin Ghakkar. The Rai submitted and gave his daughter in marriage to the Sultan. Moreover, the Rai sent an army under his son to join the Sultan's troops. Jalal ad-Din now turned against Nasir-ud-din Qabacha, the governor of Sindh, who was preparing to ravage the country of the Rai. He sent an army under his Uzbek general towards Uch. Qabacha, who was defeated, took shelter in the fort of Akar and Bakkar. When Jalal ad-Din reached Uch, Qabacha fled to Multan. The Sultan demanded money and the surrender of his wife (daughter of Amin Malik) and her brother, who had taken shelter at Multan, having fled from the battle of Indus. Qabacha complied with all the demands of the Sultan. Jalal ad-Din returned to Salt Range when the weather became hot, and on the way he besieged the fort of Bisram (or Parsrur). But when he heard that Chagatai was in pursuit of him, he returned to Multan and demanded the remaining tribute from Qabacha. Qabacha, hearing of the advance of the Mongols, rejected the demand and prepared for the battle. So Jalal ad-Din departed towards Siwistan (Sehwan) after setting fire to Multan and Uch. Fakhru-d din Salari, the governor of Siwistan, offered his submission. After few days Jalal ad-Din left for Debal (Thatta), and on way looted and burnt all territories of Qabacha. When he reached Debal, Jaisi (other names: Hasar, Jaisar, Jashi) of the Soomra dynasty, took to flight. Jalal ad-Din sent an army under Khas Khan to Nahrwala, who returned with much spoil and captives. At Debal, he demolished a temple and erected a large Jami mosque. Meanwhile, the Sultan received intelligence that his brother Ghiyasu-d din had established himself in Iraq; and the nobles and soldiers were desirous of the sovereignty of Jalal ad-Din. Upon this, he departed from Debal and proceeded to Iraq, by way of Makran in 1224. Jalal ad-Din had spent three years in exile in India.

Chengiz Khan sent his son Chagatai Khan with a large force towards Makran, and another army under Ogedei Khan (Chengiz's third son) to Ghazni. Chagatai Khan after plundering Kach and Makran halted for the winter at Kalinjar, a country on the banks of the river. The greater part of his army fell sick due to the badness of the climate. He massacred nearly 40,000 Hindu prisoners on the ground that they made the air of the camp pestilential. He also dispatched ambassadors to the countries of Kach, Kutch, Makran and Surat, and received the submission of many. Those, who opposed, were put to the sword. After the troops had recovered from their sickness, and as they could obtain no intelligence of Jalal ad-Din, Chagatai Khan marched towards Turan. Ferishta says that before marching to Makran, Chagatai Khan laid siege to Multan and Qabacha exhibited such determined courage that the siege was raised after forty days.

Historians marks the heroism and escape of Jalal ad-Din Khwarazm Shah to Hindustan, one of the wonders of the time. He was the last ruler of the Khwarazmian empire.

Jalal ad-Din's father Sultan Ala ad-Din had defeated Muhammad Ghori in 1203. During the reign of Sultan Ghiyath al-Din Mahmud, Ala ad-Din invaded Ghor and defeated him. Ala al-Din Ali, the last Sultan of Ghor, was captured by the Khwarazm Shah in 1215 and thus the Ghurid empire passed under the sway of the Khwarazmians.