These were My Ambitions, Says Ala-ud-din Khilji

Posted onAugust 14, 2018
I ascended the throne of the Kushk-i-Lal (Ruby Palace) at Delhi in the year 1296. My treasury was filled up with gold. I scattered money over the amirs and maliks of the late Sultan Jalal-ud-din Firoz Khilji, my uncle. They were so deluded by the money I gave them that no one ever mentioned the horrible crime I had committed. Within no time, they became my loyal followers. Anyway, after I secured my throne, my principal object was to get rid of my cousins, and my aunt, the Malika-i-Jahan.

After some time the accursed Mongols crossed the Indus and came to my country. I sent my dearest brother Ulugh Khan towards them, who returned with the news of victory and Mongol prisoners. After the conquest of Multan and the capture of Sultan Jalal-ud-din's sons, my government had become firmly established. Now I had no rivals left. It was now still further confirmed by this victory over the Mongols. Now that my power and authority were vastly increased. I then ordered my brother to seize the gold, the various employments and the territories which I had conferred upon the amirs and maliks of Sultan Jalal-ud-din. I blinded some of them, and imprisoned some others. Their property was confiscated. But, three nobles, Malik Qutubuddin Alawi, Malik Nasiruddin Ranah and Amir Jamal, who had not deserted their master and his sons, and had never taken money or gold from me, were spared. 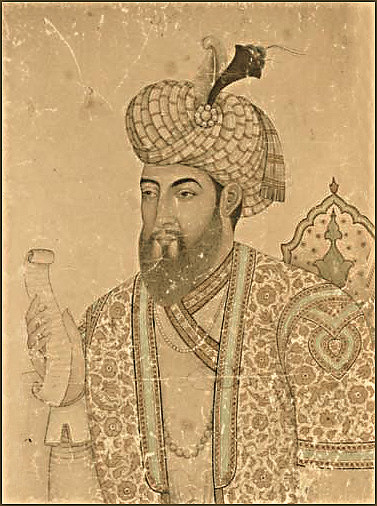 The Mongols again invaded my country in the beginning of the third year of my reign. Zafar Khan achieved a great victory over them. Meanwhile the Hindu kingdom of Gujarat came under my possession. Victories followed one another in close succession. Every year two-three sons were born to me. My treasury was overflowing. Meanwhile, some fancies occurred in my mind, which I am going to tell you. You know, I am not a literate man; I do not have the knowledge of reading and writing. I had never associated myself with any learned men.

Formation of a New Religion:


God Almighty gave to the Prophet four companions, through whose influence and power the Law and Religion were established, and through this establishment of law and religion the fame of the Prophet will continue to last till the day of judgment. Whosoever has acknowledged and called himself a Musalman, has concidered himself belonging to his faith and sect. God has granted me also four companions: Ulugh Khan, Zafar Khan, Nusrat Khan and Alp Khan, who, through my prosperity, have attained to princely power and dignity. If I am so inclined, I can, with the help of these companions, establish a new religious faith; and by the force of my arms and those of my companions, cause all the people to adopt it. Through this religion, my fame and that of my companions will remain among men to the last day, just as that of the Prophet and his companions.

I styled myself "Alexander the Second" (Sikandar-i-Sani) in the public prayers and on the coins. I have wealth, elephants and forces, innumerable. My wish is to place Delhi in charge of a vicegerent, and then go out myself into the world, like Alexander, in pursuit of conquest, and subdue the whole habitable world. Every country that I conquer I will entrust to one of my trusty ministers, and set out myself in quest of further acquisitions. Who is there to stand up against me?

I discussed with the nobles both these projects in assemblies and wine parties. Nobody told me that these were so ridiculous; most of them applauded me (I was unaware of the fact that my nobles were not speaking the real truth for fear of my violet temper).

I asked the advice of Malik Alau-l mulk regarding my two projects. Alau-l mulk was the Kotwal of Delhi and also one of the wisest men of the country. One day I invited him to a wine party. He requested me, "If your Majesty will order the wine to be removed from this assembly, and will permit no one to stay with him, but four maliks, I will lay clearly and explicitly before the throne my views and the conclusion that I have arrived at with respect to these two schemes of your Majesty". I did so. He then advised me, "The subject of religion with its tenets and doctrines should certainly never be discussed and commented on by your Majesty, for that is the duty of the prophets, not of kings. Religion and law spring from divine inspiration; they are never established by the plans and designs of man. From the time of Adam till now they have been the mission of Prophets and Apostles, as rule and government have been the duty of kings. The prophetic office has never been exercised by kings, and never will, so long as the world lasts, although prophets have sometimes held kingly sway. My advice is that your Majesty should never talk about founding any form of faith or religion. Your Majesty knows what rivers of blood Genghis Khan made to flow in Muhammadan cities, but he never was able to establish the Mongol religion or institutions among Muhammadans. Many Mongols have turned Musalmans, but no Musalman has ever become a Mongol".

On hearing these words of Alau-l mulk, I bent down my head. I praised him that the reason why I have made him my confidential adviser is that I know he is a truly loyal subject of mine, and in giving an opinion, he always speak the whole truth before me, and never conceal the real state of the case. My four companions also were pleased with his speech. I promised Ala-ul-mulk that from henceforth no one will ever hear me speaking such words. I gave blessings on him and his parents, for speaking the truth. I then asked his opinion about my other project. He said:

"Some kings, in former ages, formed the same great design which your Majesty has resolved on at present. I am well aware that your Majesty possesses sufficient wealth to enlist two or three lakhs of horsemen, and conquer the whole world. It would be right however, for your Majesty to reflect as to whom you could consign the charge of Delhi and its empire, which you have gained at the cost of much vast sums of money, and so much bloodshed, and what force you would give him; while you yourself departed in pursuit of territorial aggrandizement, and proceeded like Alexander to conquer the habitable globe. For, no matter whom your Majesty might appoint in Delhi or any other country; by the time you thought of returning to your own capital again, how could those officers, or those countries have secured peace and safety in these times of sedition and rebellion.


The age of Alexander was a totally different era; in those earlier times, fraud, perfidy and breach of engagements were less common. The men of that period since when ages have elapsed, when they entered into an engagement did not break it. Your Majesty has no counselors like Aristotle, who not only kept his own country in peace and security, but brought other nations, by voluntary consent, to place themselves under his master's protection. During the period of Alexander's absence, which extended to two and thirty years, there was no kind of calamity in that country. Therefore, when Alexander, after completing the conquest of the world, returned to the country of Greece, he found the inhabitants all loyal and devoted to him.

Very different are the men of the present time and age. Perfidy and ingratitude daily appear. Brothers become traitors to each other, and children conspire against their parents. How much is this degenerate age unlike to the virtuous times of Alexander?"

I asked him then what is the use of my wealth, elephants and horses, if I remain content with Delhi, and undertake no new conquests, and how shall I acquire a reputation for victorious achievements?

He replied, "There were two important undertakings in which his treasure might be expended to good purpose: One is them is the conquest and subjugation of all Hindustan, such as Ranthambore, Chittor, Chanderi, Malwa, Dhar and Ujjain, from the east to the banks of Sarayu, Sivalik to Jalore, Multan to Damrila, from Palam to Lahore and Dipalpur; If these countries which are the refuge of refractory people and the asylum of robbers come under your rule, the whole of the plains of Hindustan will become free from all disturbances and danger. The second and more important task is to protect India from the invasions of the Mongols. This would secure the peace of Hindustan, and procure Your Majesty immortal honour, by bestowing happiness upon your people; this will be in no way inferior to the world conquests of Alexander.".

He added, "What I have recommended can never be accomplished unless your Majesty gives up drinking to excess, and keeps aloof from convivial parties and feasts. If you cannot do entirely without wine, do not drink till the afternoon, and then take it alone without companions".

I was very much pleased at his excellent advices. I promised him to observe it. I gave him a brocaded robe of honour with a gold waistband weighing half a man, ten thousand tankas, two horses fully caparisoned, and two villages in inam. The four Khans also added three or four thousand tankas, and two or three horses with trappings. The advice which Alau-l mulk had given was greatly praised by my officers and subjects.
Share
Post a Comment
Labels#Delhi Sultans
Newer
Older