Posted onAugust 11, 2018
Ala-ud-din was the nephew of Sultan Jalal-ud-din Firoz Khilji, founder of the Khilji dynasty. He came to the throne by treacherously murdering his uncle. Likewise, Ala-ud-din's nephews, also attempted to murder their uncle and sit on the throne of Delhi. Four revolts occurred during the reign of Ala-ud-din Khilji (1296-1316), of which two of them were lead by his nephews.

Revolt of the New Musalmans: While Ulugh Khan and Nusrat Khan were returning to Delhi with immense quantity of booty, after plundering Gujarat, they halted at Jalore, where they demanded from the soldiers the fifth part of the spoil taken by them. They inflicted great violence on soldiers; who were put under bellows and ordered to drink saline water, which caused a rebellion of the soldiers, mostly the new Muslims. They murdered Malik Izzuddin, the brother of Nusrat Khan; they also killed a nephew of Ala-ud-din, supposing him as Ulugh Khan. Nusrat Khan, meanwhile, sent a force to attack the rebels, who dispersed and fled. Mir Muhammad Shah (Mahima Sahi of the Hindu records), a New-Muslim leader of these rebels, took refuge with Rai Hammir Dev at Ranthambore. 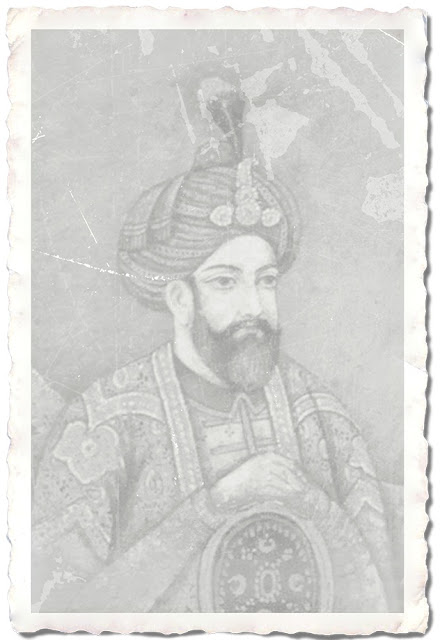 Nusrat Khan, by the Sultan's order, massacred the families of those Mongols. He pitied not the weeping mothers, nor the smiling infants who clung to their breasts. Barani says that it was the first time in Delhi to punish women and children for the offence of their relatives. Afterwards, when Ala-ud-din Khilji conquered Ranthambore, Muhammad Shah was also put to death.

Rebellion of Akat Khan: Sulaiman Shah Akat Khan was the Vakildar as well as brother's son of Ala-ud-din. Akat Khan revolted when Ala-ud-din was on his march from Delhi to Ranthambore. On the way, Ala-ud-din halted for a few days at Tilpat and went out for hunting. Upon a rising ground, he sat down with a few attendants, and commanded the rest to hunt in his view. At that time Akat Khan came there with a few New-Muslim horsemen, and attacked him. These horsemen approached Ala-ud-din shouting tiger! tiger! and began to discharge arrows at him. Several arrows reached his arm. As it was the winter season, and the Sultan was wearing a thick wadded garment, his wounds were not fatal. Manik, a slave of Ala-ud-din, threw himself before his master and acted as a shield. The footmen who stood behind the Sultan covered him with their bucklers. When Atak Khan rushed forward to cut off the Sultan's head, the footmen cried out that the Sultan was already dead. Atak Khan, believing the words of the footmen, hurried to Tilpat and sat on the Sultan's throne, proclaiming that he had slain the Sultan. The army was thrown into the utmost confusion; people now came before him to pay their respects. Atak Khan also attempted to go into the harem, but Malik Dinar told him that he should not enter until he showed him the Sultan's head.

Ala-ud-din in the meantime recovered his senses, and bound up his wounds. He imagined that Atak Khan's treason must be connected with a preconcerted conspiracy of the nobles and decided to fly to his brother Ulugh Khan at Jhain. But Malik Hamid-ud-din, the Naib-Vakildar, advised him against this. He recommended him to go to his camp immediately, and show himself to the army; observing that the usurper had not yet had time to establish himself. He said, "Upon seeing the Sultan's umbrella, they will repair to your threshold, and bring the elephants before you". He also added that if there is any delay, it would be difficult to remedy this mischief. Ala-ud-din adopted his advice and hastened towards the pavilion. Every trooper, who saw him on the way, joined him; and by the time he reached the pavilion, about five hundred men had gathered round him. When he got near the camp, he mounted a hillock; and showed himself. The court of Atak Khan was immediately broke up. He mounted his horse and fled to Afghanpur. He sent two officers in pursuit of Atak Khan, who beheaded him. Kutlugh Khan, younger brother of Atak Khan, and the chief conspirators were also executed. When Ala-ud-din recovered of his wounds, he continued his march to Ranthambore.

Revolt of Umar Khan and Mangu Khan: Amir Umar and Mangu Khan were the sons of Ala-ud-din's sister who held the governments of Budaun and Oudh. While Ala-ud-din was busy with the siege of Ranthambore, news arrived that Umar and Mangu had broken out in revolt at Budaun. The Sultan sent some officers against them, who seized them and carried to Ranthambore. They were blinded and subsequently put to death. Most of their followers were also captured and imprisoned.

Revolt of Haji Maula: While the siege of Ranthambore was in progress, the revolt of Haji Maula broke out at Delhi. Haji Maula was a slave of the late Malik Fukhr-ud-din Kotwal. Turmuzi, the Kotwal, had oppressed the people severely. Taking advantage of Ala-ud-din's absence, Haji Maula secured the support of some nobles and raised a rebellion. He went to the house of Turmuzi carrying a forged firman; and sent word to him that a farman had come from the Sultan, and asked him to come out. As soon as Turmuzi came out, Haji cut off his head, and explained to the crowd that he had slain him according to the order of the Sultan. He also sent a message of the same effect to Alauddin Ayaz, the Kotwal of Siri, but Ayaz had been informed of the outbreak; he collected his men and strengthened the gates of the citadel. Haji Maula then went to the ruby palace; released all the prisoners and took them along with him. He also took possession of the royal treasury, armoury and stables and divided among his followers. The Maula went to the house of Alawi (Ferishta says that he was one of the prisoners), a descendant of Sultan Iltutmish, and placed him on the throne in the ruby palace and commanded all the principal men to pay him allegiance. Intelligence of all this reached Ala-ud-din at Ranthambore, who was struck motionless with astonishment, but stirred not a step from the siege. He, however, wrote to his foster-brother Malik Hamid-ud-din on the subject.

Malik Hamid-ud-din came to Delhi and took the field with his followers, and a body of horsemen of Zafar Khan from Amroha also joined him. In the following struggle, Hamid-ud-din killed Haji Maula. He then went to the ruby palace and beheaded Alawi. When the news of victory reached Ala-ud-din, he sent Ulugh Khan to Delhi to punish the conspirators. The sons and grandsons of the late Malik Fukhr-ud-din Kotwal, who had no knowledge of the revolt, were all put to death.

Ala-ud-din Khilji then consulted with his chief advisers the measures for preventing the rebellions and inquired them the reason for these repeated insurrections. They said, "We must place the Sultan's inattention to advance the good, or to redress the wrongs of the people. The excessive use of wine is the source of many disorders; for when men form themselves into societies for the purpose of drinking, they disclose their secret thoughts to each other, and are frequently excited to undertake desperate projects. The close connections formed by the nobles of the court, are pregnant with danger to the state. Their numerous intermarriages, and the patronage in the hands of a few, gave them a degree of power, which enabled them, by coalition, to create revolutions whenever so disposed. The last and not the least cause of disturbance is, the unequal division of property; for the wealth of a rich empire, if confined to a few persons, only rendered them, as governors of provinces, more like independent princes, than subjects of the state".


1. Seizure of Property: He ordered that, the villages held by proprietary right, in free gift, or as a religious endowment, should become the property of the throne; and whoever had any riches, it was to be seized, and brought into the treasury. The people suffered great distress; and were always anxious for their daily bread. The name of rebellion was never on their tongues.

2. Appointment of Spies: He appointed spies, that he knew the good and bad things that men did. Whatever happened in the houses of the nobles, maliks and amirs were communicated to the Sultan by his spies. The system of reporting went to such a length, that nobles dared not speak aloud even in the largest palaces; if they had to say anything made use of gestures. The transactions in the bazars, the buying and selling, and the bargains made, were all reported to the Sultan.

3. Prohibition of Wine: Wine-drinking and wine-selling were prohibited, as also the use of beer and intoxicating drugs. Dicing also was forbidden. He himself set the example to his subjects, and emptied his cellars in the street. But some people made distill wine and brought into the city by various tricks and devices. Some even distilled it in their houses. When the Sultan became aware of these practices, he ordered a special well to be dug near the Budaun gate, and used it as a prison for these people. Most of the men who were imprisoned in this well, died. The Sultan also ordered that if any one distilled spirits privately, and drank the liquor in seclusion; without having a party or assembly, and without selling it, the spies were not to interfere with him. After the prohibition of wine and beer in the city, conspiracies diminished, and apprehension of rebellion disappeared.

4. Prohibition of Feasts and Meetings: The Sultan gave commands that no private meetings or political discussions should be held among the nobles of his court. They were forbidden to form matrimonial alliances without a special licence of the Sultan. This latter order was carried into such rigorous execution, that no man dared to entertain his friends without a written permission from the vizier.

There had been no revolt for some time. Meanwhile, several of the amirs of the New Musalmans, in poverty and distress, entered into a conspiracy to murder Ala-ud-din. This conspiracy became known to the Sultan. The cruel Sultan ordered that the race of the "New Musalmans", who had settled in his territories, should be fully destroyed. He ordered them all to be instantly put to the sword. Upon this command, all the New Musalmans were killed, of whom probably only a few had any knowledge of the intended revolt. Their houses were plundered, and all their wives and children were enslaved.