The Rustless Iron Pillar of Delhi, an Ancient Wonder

Posted onSeptember 15, 2018
The awesome Iron Pillar stands in the center of the courtyard of the Quwwat-ul-Islam mosque at Qutub Complex in Mehrauli, Delhi. "Some of the Indian savants told me that it was made of seven metals mixed together", Ibn Batuta says. "Its length is thirty cubits; and its circumference eight. A space equal to the fore-finger on this pillar has been polished; and it is very bright. Even iron produces no effect on the Pillar".

The Pillar is notable for the corrosion-resistance of its cylindrical exposed portion. It was dug out in 1961 for chemical treatment. Its measurements are as follows: The total length of the Pillar is 7.16 meters, ie, about 23 feet and 6 inches, of which 94cm is buried underground. It was built with almost pure malleable iron, which shows only the slightest signs of rusting. (There is a horizontal fissuring on the Pillar thought to be caused by cannonball strike.) The monument is a solid shaft of wrought iron welded together. In 1997, a fence was erected around the pillar.

Legend about the Pillar: 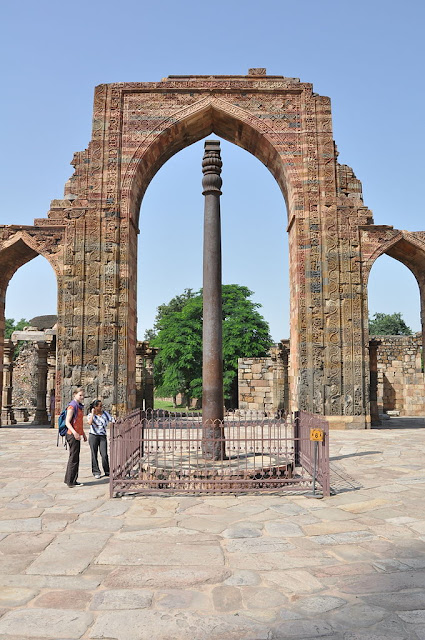 Legend says that King Anang Pal, founder of the Tomar dynasty of Delhi, set up this Pillar. He was assured by a learned Brahman that, as the foot of the Pillar had been driven so deep into the ground that it rested on the head of Vasuki, the legendary king of serpents, who supports the earth, and hence was immovable, and that the dominion would remain in his family as long as the Pillar stood. But the Raja, doubting the truth of the Brahman's statement, ordered the Pillar to be dug up. When this was done, the foot of the Pillar was found wet with the blood of the serpent king, whose head it had pierced. Regretting his unbelief, he raised the Iron Pillar again; but, owing to the king's former incredulity, every plan to fix the Pillar firmly now failed and, in spite of all his efforts, it still remained loose in the ground. And this Dhili Killi (Loose Pillar), is said to have been the origin of the name of the ancient city of Delhi. 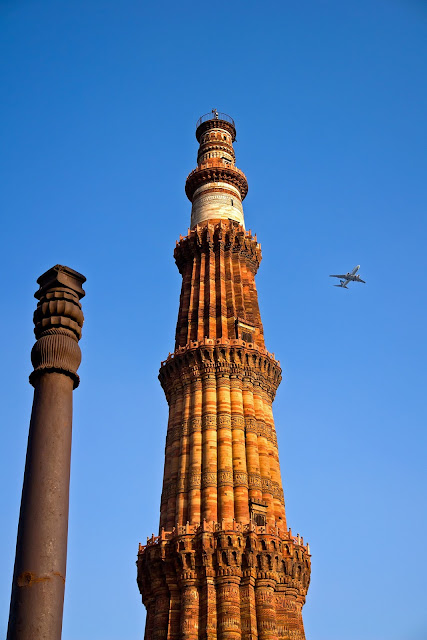 "He, on whose arm fame was inscribed by the sword, when, in battle in the Vanga countries, he kneaded (and turned) back with (his) breast the enemies who, uniting together, came against (him); he, by whom, having crossed in warfare the seven mouths of the (river) Sindu, the Vahlikas were conquered; he, by the breezes of whose prowess the southern ocean is perfumed even today".

"He, the remnant of the great zeal of whose energy, which utterly destroyed (his) enemies, like (the remnant of the great glowing heat) of a burned-out earth; though he, the king, as if wearied, has quit this earth, and has gone to the other world, moving in (bodily) form to the land (of paradise) won by (the merit of his) actions, (but) remaining on (this) earth by (the memory of his) fame".


"By him, the king, who attained sole supreme sovereignty in the world, acquired by his own arm and (enjoyed) for a very long time; (and) who, having the name of Chandra, carried a beauty of countenance like the full moon (meaning of Chandra is full moon), having in faith fixed his mind upon (the god) Vishnu, this lofty standard of the divine Vishnu was set up on the hill (called) Vishnupada".

A short inscription on the Pillar reads "In 1052, Anang Pal founded Delhi". 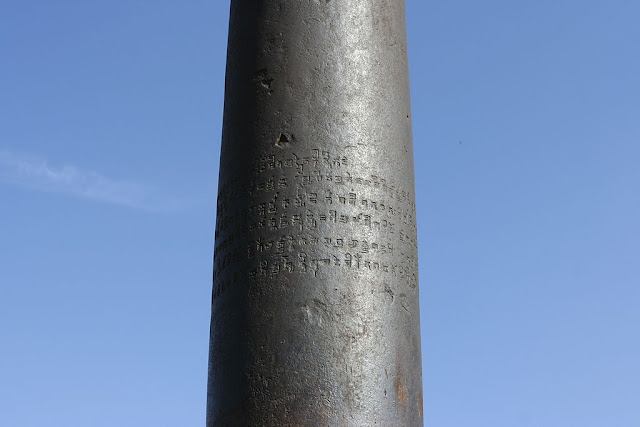 Inscription on the Iron Pillar (Translation by Vincent Smith - 1897):

"This lofty standard of the divine Vishnu was erected on Mount Vishnupada by King Chandra, whose thoughts were devoted in faith to Vishnu. The beauty of that king's countenance was as that of the full moon; by him, with his own arm, sole world-wide dominion was acquired and long held; and although, as if wearied, he has in bodily form quit this earth, and passed to the other-world country won by his merit, yet, like the embers of a quenched fire in a great forest, the glow of his foe-destroying energy quits not the earth; by the breezes of his prowess the southern ocean is still perfumed; by him, having crossed the seven mouths of the Indus, were the Vahlikas vanquished in battle; and when, warring in the Vanga countries, he breasted and destroyed the enemies confederate against him, fame was inscribed on (their) arm by his sword".

Who is the Mysterious King Chandra?

It is widely accepted that the Pillar was built in the Gupta period (320 A.D - 495 A.D). But, there is still considerable uncertainty about the identification of King Chandra mentioned in the inscription and original location of the pillar.

The King's achievements mentioned in the inscription are as follows:


Chief archaeologists and scholars who solved the mystery of inscriptions on the Iron Pillar were James Prinsep, Bhau Daji, J. F. Fleet, Vincent Smith and R. Balasubramaniam. Daji recognized the name of the King in the inscription as Chandra. J. F. Fleet identified Chandra as Chandra Gupta I, the founder of the Gupta dynasty. But the list of Samudra Gupta's conquests prove that the dominions of his predecessor Chandra Gupta I were of moderate extent, and it is incredible that his arms ever penetrated either into Bengal or Balkh. Pandit Haraprasad Shastri and Babu Nagendra Nath Vasu identifies 'Chandra' as the Pushkarana king Chandravarman. B. G. Bhattacharya opposes this claim and says that Chandravarman was the ruler of a small territory, and moreover, acknowledged the supremacy of the Gupta emperors. In the opinion of Shriram Goyal, author of the book 'A history of the Imperial Guptas', King Chandra is none other than Samudra Gupta, who had also the name of Chandraprakasa. 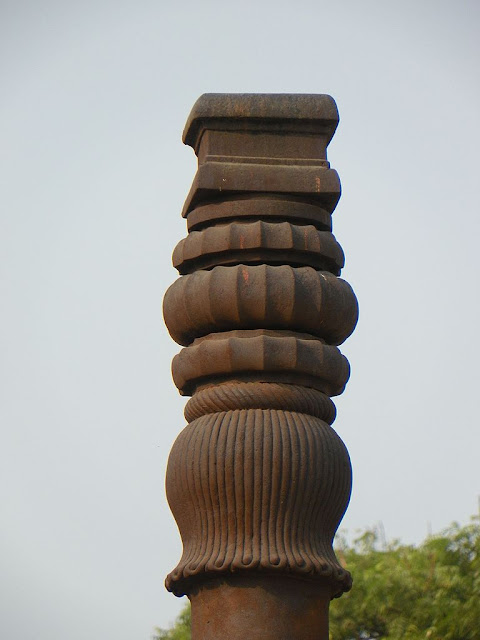 Dr. Hoernle, Vincent Smith and R. Balasubramaniam, ascribes the Pillar to Chandra Gupta II, in whose reign the Gupta empire reached its climax. He bore the title of Paramabhagavata, the most devout worshiper of Vishnu. In Chandra Gupta II's coins, the short name of the King is inscribed as 'Chandra', while his complete title and name is provided in the circular legend.

Original Location of the Pillar:

The Pillar is neither a vijaya-stambha (pillar of victory) nor a kirti-stambha (pillar of fame) but a dhvaja-stambha (symbolic flagstaff) of Lord Vishnu. It appears that the Pillar was erected as a standard to support the effigy of Garuda, the vehicle of Vishnu (there is a rectangular slot in the top of the Pillar); and was originally installed in a Vishnu temple on a hill by King Chandra, before the inscription could be prepared; and the engraving might have been done by his son some time later.

According to B. G. Bhattacharya, the Pillar was originally set up in the country of the Vahlikas, ie, Balochistan. In the opinion of Vincent Arthur Smith, the Mount Vishnupada mentioned as the location for the Pillar could have been in Mathura, the ancient pilgrim center, which was within the boundary of the mighty Gupta empire, and not very far from Delhi. According to J. Ph. Vogel the temples of Mathura are either Buddhish or Jaina and there are hardly any which pertain to the worship of Vishnu. Moreover, the mounds of Mathura are not natural hills but tumuli. According to him the original location of the Pillar was, most probably, ancient Magadha (modern Bihar) or some neighbouring country. Since there is a short inscription of Anang Pal on it, many scholars opinion that it was that King, who shifted this Pillar to Delhi.

R. Balasubramaniam says that the Pillar was originally located at Udayagiri (near Bhopal, Madhya Pradesh), which is famous for rock-cut caves and temples of the Gupta Period. Udayagiri is renowned for Vaishnavite worship from times even before the Gupta period; and footprint worship is also well established in this region. He adds that Iltutmish shifted it to Delhi. It was part of the booty brought to Delhi after the plunder of Malwa by Iltutmish.

Conclusion: We can conclude that the Iron Pillar at Delhi was built by Chandra Gupta Vikramaditya and inscribed by his son Kumara Gupta I. The original location of the Pillar was Udayagiri.

There are several other inscriptions on the Pillar, which are of no historical importance.

The Rustless Wonder: A Study of the Iron Pillar at Delhi By Tanjore Ramachandra Anantharaman
Facts and Fancies about the Iron Pillar of Old-Delhi. J. Ph. Vogel
Story of the Delhi Iron Pillar By R. Balasubramaniam
Share
Post a Comment
Labels#Monuments
Newer
Older