Posted onSeptember 12, 2018
The Qutub Mosque of Delhi is known by various names such as the Quwwat-ul-Islam (Might of Islam), Masjid-i-Jama-i-Hazrat and Masjid-i-Jama-i-Delhi. Originally built by Qutub-ud-din Aibak, the first Muslim ruler of India, Quwwat-ul-Islam is the first mosque of India. It is included in the list of UNESCO World Heritage sites. The famous Qutb Minar is its mazina (a tower for sounding the Azan or call for prayers). In the center of the mosque stands an awfully enormous Iron Pillar. Other important buildings in the Qutb Complex at Mehrauli are: the Alai Darwaza, Tomb of Iltutmish, Alai Minar, Ala-ud-din Khalji's tomb and madrasa and the Tomb of Imam Zamin. 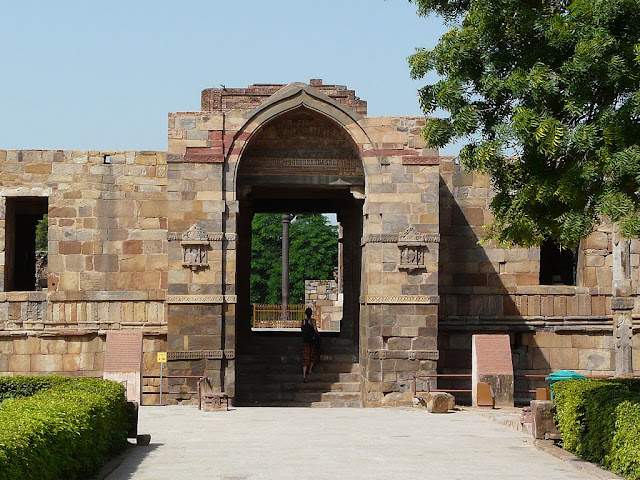 After the Muslim occupation of Delhi in 1192, Qutub-ud-din Aibak, the favorite slave and commander-in-chief of Muhammad Ghori, laid the foundation of this mosque. Ibn Battuta says "At the eastern gate of the mosque there are two enormous idols of brass prostrate on the ground and held by stones. The site was formerly occupied by a budkhāna, that is idol temple, and was converted into a mosque on the conquest of the city". 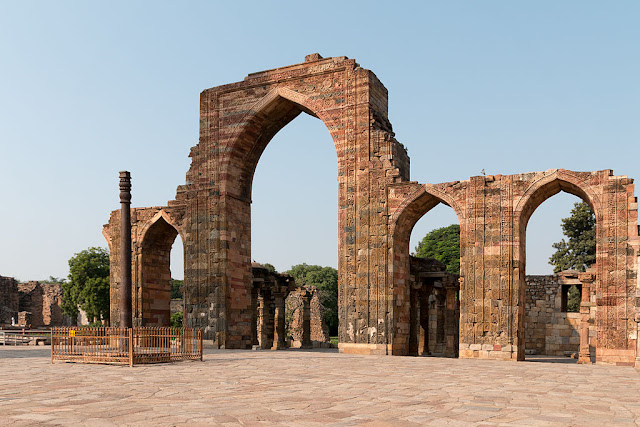 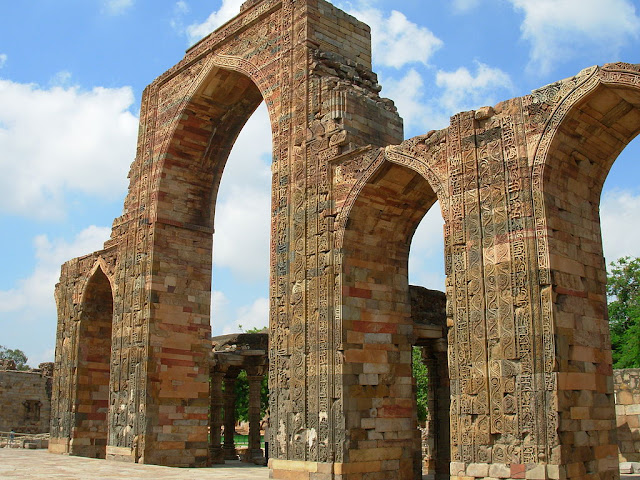 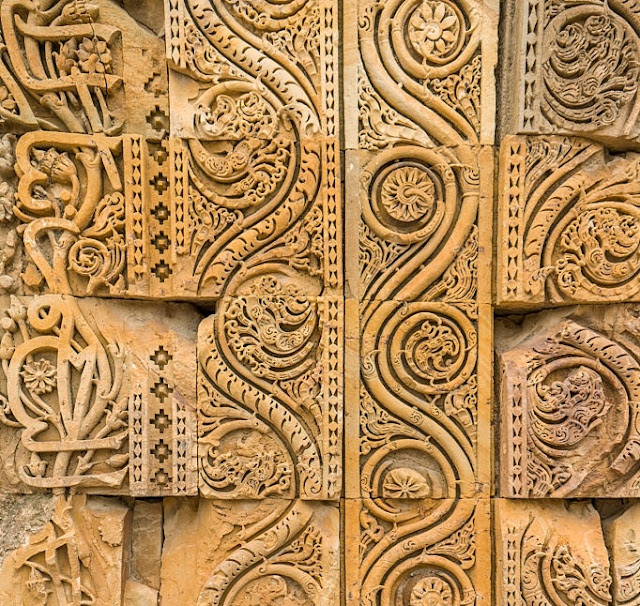 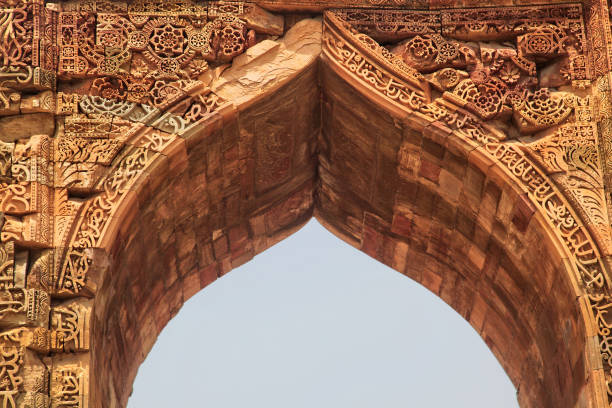 The original mosque of Qutub-ud-din was built as a quadrangle enclosed on four sides by colonnades or arcaded cloisters. One can still see Hindu motifs like sculpted figures, overflowing kalasa vessels spouting flowering creepers, bells and chains and lotus flowers in the pillars. The Muslim craftsmen had no time to sort out properly the component parts of the exquisitely sculptured columns of the temples when they rearranged them. In some cases the shaft does not match with the pedestal, being originally parts of two different pillars.

The great screen, which covers the front of the prayer hall (Mihrab) on western side, erected by Qutub-ud-din is perhaps the most interesting feature of the mosque. It consists of a lofty central arch of ogee shape with two smaller arches on each side. The arches were built with red and yellow sand stone. The first band consists of verses from the Quran and is of the shape of the arch. The screen is particularly remarkable for its rich ornamentations representing serpentine tendrils and undulating leaves. These arches were finished in 1197 and it was the last work of Qutub-ud-din in connection with this mosque. The mosque was further extended by Iltutmish in 1229 and then by Ala-ud-din Khilji in 1311. 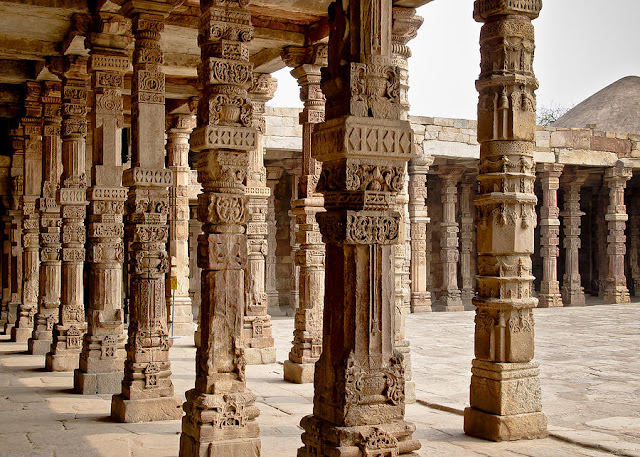 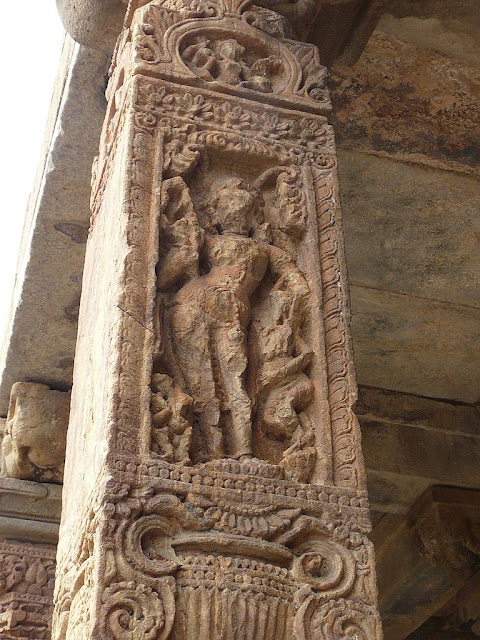 The main entrance of the mosque is a domed gate on the east. The eastern gateway has the following inscriptions: "This mosque was built by Qutub-ud-din Aibak. May God's mercy be on him, and on him who prays for a blessing on the faith of the founder of this blessed [edifice]".

"In the name of God, the merciful and benevolent; he who entered it [mosque] has found salvation; for [the favour of] God it is incumbent on all men who have the means [to defray the expenses] of the road, to make a pilgrimage to the House [Kabah] [For him] who has disbelieved [this command], there is no doubt that God is independent of [all that he has] created".

"This fort was conquered and this Jami Masjid was built in the months of the year 587 (AD 1192) by the Amir, the great and glorious commander of the army, Qutb al-Dawla wa'l-Din, the Amiru-l-umara Aibak Sultani, may God strengthen his helpers. The materials of 27 temples, on each of which 2,000,000 Deliwals had been spent, were used in [the construction of] this mosque. May God the great and glorious have mercy on him who should pray for the faith of the good builder". 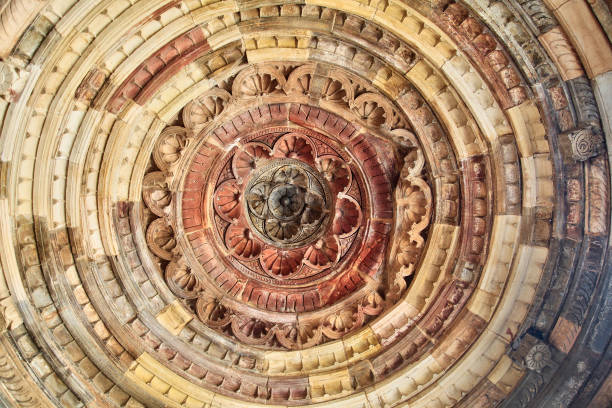 Inscription on the northern gateway reads thus: "In the name of God, the merciful and the benevolent. God invites [you] to heaven; he directs whomever he pleases on the firm path [of faith]. In the months of the year [5]92 Hijri (AD 1195), this building was commenced by the high command of the great king, great in the world and in faith, Muiz-ud-din Muhammad Bin Sam (Muhammad Ghori), ally of the Amir al-Mu'minin".

Inscription found on a pillar in Aibak's prayer hall, "Under the supervision of the slave Fazl ibn Abul Maali". 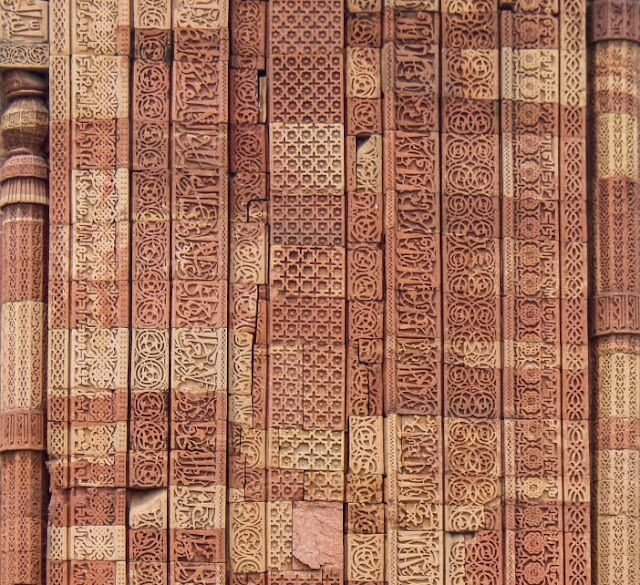 Iltutmish almost doubled the size of the mosque by extending the prayer hall and the screen so that the Qutb Minar now fell within the mosque enclosure. 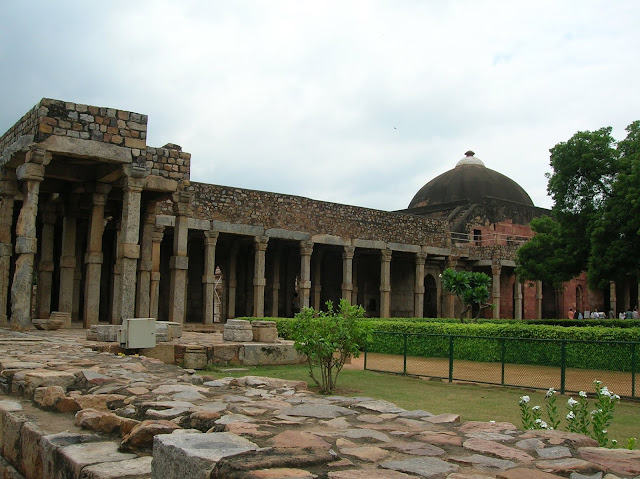 Amir Khusru says that Ala-ud-din Khilji 'ordered a fourth court with lofty pillars to be added to the pre-existing three courts (The court in the center was constructed by Aibak and the two courts on either side of it by Iltutmish). Verses from the Quran were engraved on stone as if it was wax; on one side the inscription ascended so high that you would think the word of God was going up to heaven; on the other side it came down in such a way as to symbolize the descent of the Quran to earth'. The Alai Darwza, southern gateway of the mosque, is the most noteworthy feature of Ala-ud-din's additions. The mosque and the Alai Minar were left incomplete as the Sultan died in 1316.


When Ibn Battuta saw the mosque in 1334, there were in it thirteen pavilions of stone, as well as a stone pulpit, and there were four courtyards. He also noticed near the eastern gate of the mosque two very big idols of copper connected together by stones and every one who comes in and goes out of the mosque treads over them.

Sultan Firoz Shah Tughlaq (1351-1388) writes in his Memoirs, "The Jami Masjid of Delhi constructed by Sultan Muiz-ud-din Sam was in need of repair and I had it restored so that it became strong again". Then what had happened to this mosque? How come it is in complete ruins now?