Posted onDecember 29, 2018
Sultan Muhammad Tughlaq (reign: 1325-1351) was a very ambitious ruler. We have already learned about one of his curious schemes: the transfer of the capital to Devagiri and its desertion thereafter. According to Barani, Muhammad's third project was the introduction of a token currency, ie, copper and brass coins. 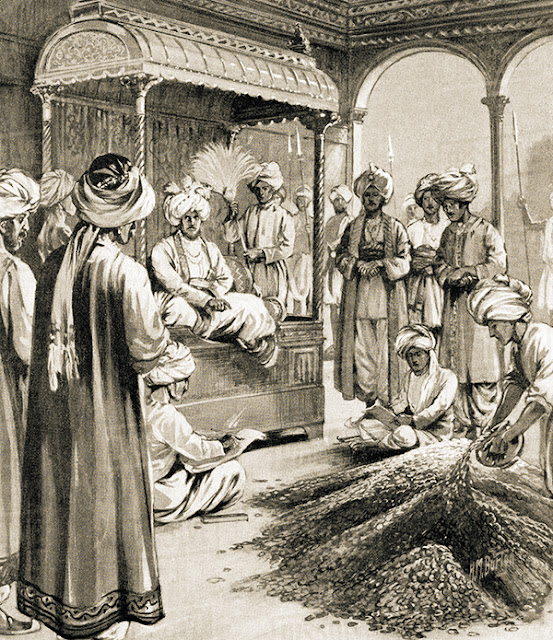 Muhammad Tughlaq, the Prince of Moneyers

[Muhammad's coins may be divided into four classes: those struck in memory of his father; those struck in his own name; those recording the names of the Khalifas; and the forced currency. Two kinds of tankas: silver and gold, of 175 grains each were current in the Delhi Sultanate until the age of Muhammad Tughlaq. Muhammad, soon after his accession, introduced a gold dinar of 200 grains and an adali or a silver coin of 140 grains. It seems that there was a relative scarcity of silver in the country.]

Barani writes that the Sultan's bounty and munificence had caused a great deficiency in the treasury. The transfer of the capital to Devagiri had also caused a huge expenditure. [However, the Sultan's treasury was not empty; see below] Moreover, says Barani, the Sultan, in his lofty ambition, had conceived it to be his work to subdue the whole habitable world and bring it under his rule. To accomplish this impossible design, an army of countless numbers was necessary, and this could not be obtained without plenty of money. As the number of his troops and his revenue were not sufficient for this, he introduced copper money, and gave orders that it should be used just as the gold and silver coins, in buying and selling. "Among other sources of loss to the treasury was this that the Sultan enacted that the mohur of copper should become current on an equal footing with the mohur of silver and anyone who showed reluctance to receive it was punished severely", says Badauni.

This enactment led to many corrupt practices in the kingdom. Barani says, 'the proclamation of this edict turned the house of every Hindu into a mint, and they coined krors and lacs of copper coins. With these fake coins they paid their tribute, and purchased horses, weapons and goods. Every goldsmith struck copper coins in his workshop, and the treasury was filled with these [fake] copper coins'. Ferishta says that the mint was under bad regulations. "Unscrupulous and contumacious rascals used everywhere in their own houses to set up mints and stamp coins, and taking them into the cities used to purchase with them silver and horses, weapons and fine things, and thus rose to great wealth and dignity", says Badauni.

Some time after people of distant countries refused to accept these copper coins and one gold coin rose to the value of fifty or sixty copper coins. [Barani says a hundred] Trade and commercial activities were interrupted. "When the copper tankas had become more worthless than clods, and of no use, the Sultan repealed his edict. He ordered that whoever possessed copper coins should bring them to the treasury, and receive gold coins in exchange. People who possessed thousands of these copper coins, and had flung them into corners along with their copper pots, now brought them to the treasury, and received in exchange gold and silver tankas, shashganis and duganis", says Barani. People profited greatly by this arrangement and they became wealthy. Great sums went out of the treasury in exchange for the copper, and a great deficiency was caused. For a long time the copper coins remained lying in heaps in the palace of Tughlaqabad, as late as the time of Sultan Mubarak Shah Sayyid according to Yahya.

Was Muhammad bin Tughlaq the first ruler to introduce a token currency?

The Sultan had not issued copper tokens to refill his treasury. His treasury was not empty; this is proved by the fact that after the failure of the token currency, he had enough gold to pay in exchange for all the copper tokens, genuine and fake. [Ferishta alone states that after the treasury was emptied, there still remained a heavy demand, and this debt the Sultan struck off.] In the opinion of Agha Mahdi Husain, perhaps the necessity of providing an adequate substitute for the much needed silver was the immediate cause of this experiment in credit currency made by the Sultan. According to Ferishta, Muhammad had adopted his idea of token currency, from a Chinese custom of using paper money. "Muhammad Tughlaq, instead of stamped paper, struck a copper coin, which he issued at an imaginary value, and caused it to pass current by a decree throughout Hindustan", says Ferishta.


Kublai Khan, the Mongol emperor of China, had introduced a paper currency called Chao, in 1260. "He orders people to collect the bark of mulberry tree. The thin rind between the bark and the interior wood is taken, and from it cards are formed like those of paper, all black. It was then cut into pieces of different sizes and on each piece was printed the value to be placed on the note. Each bit of paper was issued with as much solemnity and authority as if it were pure gold or silver; on every piece, a variety of officials, whose duty it is, have to write their names, and to put their seals. And when all is prepared duly, the chief officer deputed by the Khan smears the seal entrusted to him with vermilion, and impresses it upon the paper, so that the form of the seal remains stamped upon it in red; the money is then authentic. Any one forging it would be punished with death. By an imperial edict the Great Khan caused his paper currency to be accepted as money all over his dominions; and none dares to refuse them under pain of death. Furthermore, all merchants arriving from India or other countries, and bringing with them gold, silver, gems or pearls, are prohibited from selling to any one but the Emperor. He has twelve experts chosen for this business; these appraise the articles, and the Emperor then pays a liberal price for them in those pieces of paper. And with this paper money they can buy what they like anywhere over the Empire. Moreover, several times in the year proclamation is made through the city that any one who may have gold, silver, gems or pearls, by taking them to the mint, shall get a handsome price for them. And the owners are glad to do this, because they would find no other purchaser give so large a price. Still, in this way, nearly all the valuables in the country come into the Khan's possession. When any of those pieces of paper are spoilt, the owner carries them to the mint, and receives fresh ones in exchange, with a deduction of 3 percent", says Marco Polo.

History records that similar notes were issued by the Chinese as early as the ninth century; and before Marco was born, money made of stamped leather was current in Italy. The Japanese also used paper money before the days of Kublai Khan. In 1294, a similar experiment was tried by Gaykhatu, the ruler of Persia (1291-1295), which was a complete failure. It happened thus: Gaykhatu was lavish in his expenditure. It soon happened that the treasury was empty. Thus he introduced Chao, the Chinese paper currency. The notes consisted of oblong rectangular pieces of paper inscribed with some words in Chinese, over which stood the Muhammadan profession of faith, "There is no god but God, Muḥammad is the Apostle of God" in Arabic. Lower down was the scribe's name, and the value of the note inscribed in a circle. A further inscription ran as follows: "The King of the world issued this auspicious Chao in the year A.D. 1294. Anyone altering or defacing the same shall be put to death, together with his wife and children, and his property shall be forfeited to the exchequer." But people refused to accept the Chao. Soon, bazaar riots broke out and economic activities came to a standstill. And Gaykhatu finally consented to abolish the paper currency.

Because of its failure in Persia, Sultan Muhammad Tughlaq did not adopt paper as the medium of exchange, but preferred copper to paper. But he did nothing to prevent fraud and forgery; there was no medium or machinery to distinguish the royal mint from private forgeries.

This experiment was tried after the transfer of capital; according to numismatic evidence the token currency lasted only for a brief period, from 1329 to 1332. And there were no riots or rebellions occurred as in Persia. People just forgot the token currency; when Ibn Battuta came to Delhi in 1334, he heard nothing about the token currency. 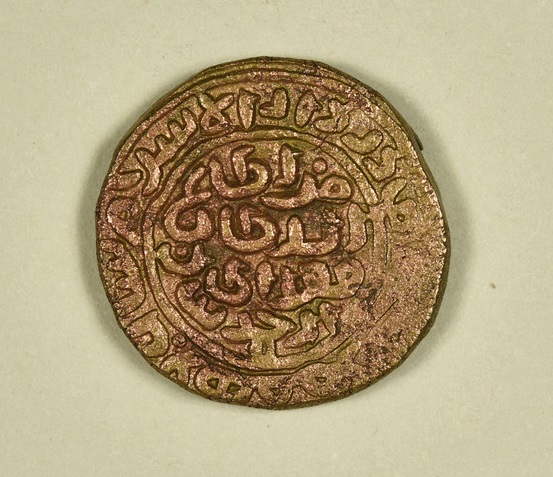 "He who obeys the Sultan, truly he obeys the Merciful one (Allah)"