Posted onJune 21, 2019
In the previous post we have seen how cruelly had Salim Shah Suri treated his nobles. He trusted nobody, but few persons like Daulat Khan Ulaja, Taj Khan Karrani, Isa Khan Hijab and Muhammad Shah Fermuli. Many revolts occurred during his reign, and he spend most of his time in crushing those.

Salim Shah was anxious about the future of his only son Prince Firoz Shah; as he always suspected the evil intentions of his cousin Mubariz Khan [Ahmad Yadgar calls him Mamrez Khan], who was also the brother of his wife Bibi Bai.

Mubariz Khan lived at Bayana, pretended to be eccentric and mad, in order to escape death or blinding. Salim Shah frequently warned Bibi Bai of the great danger their son had with Mubariz Khan.


One day he said to Bibi Bai, "If you love your son Firoz, give me permission to remove your brother Mubariz Khan; for he is a thorn in your path. If you love your brother, wash your hands of the life of your son, for he has much danger from Mubariz Khan". The empress replied, "My brother spends all his time in amusing himself, and occupies his time with music and songs. He has not the means nor the desire for sovereignty; give up the idea of destroying him". He tried his best to convince her by adducing strong proofs, but still she did not believe his words. He despaired and said, "You know best. Your son is in great danger from Mubariz Khan, and you will in the end understand what I have just said !". 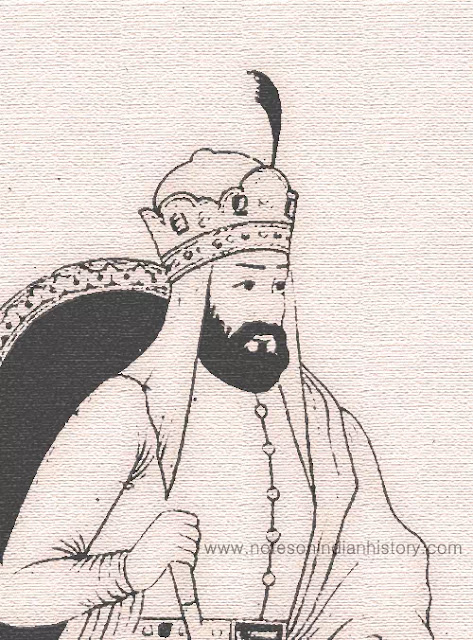 Salim Shah tried to convince her for the last time, when he was laying on his death bed: "I have the reins still in my hand, and have as yet lost nothing. If you desire your son to reign after me, tell me to do it, and I will cause your brother Mubariz Khan to be removed". On hearing this Bibi Bai began to weep. Salim Shah said, "You will regret this at a time when regret will avail nothing".

Before his death, Salim Shah appointed Taj Khan Karrani, the governor of Sambhal, to the care of his son.

When Salim Shah passed away, his twelve year old son Prince Firoz Shah ascended the throne in the fort of Gwalior. As Firoz had no experience in government matters, Taj Khan acted as his regent. 'Taj Khan issued whatever orders he chose to the nobles, but he was well ­affected to the interests of the state and of his pageant master', says Ahmad Yadgar. But some disaffected nobles went to Bibi Bai and represented that Taj Khan had acquired supreme power and was making plans to secure the throne for himself. They also advised her to send him away to the district of Malwa. Bibi Bai immediately sent Taj Khan to Malwa.


Later on, things turned out as Salim Shah had predicted. About a month after Taj Khan's departure, Mubariz Khan entered into a secret correspondence with some of the nobles and brought them over to his side. He then proceeded to Gwalior with a large army and attempted to murder the prince.

Bibi Bai fell at the feet of his brother and pleaded for the life of her son, "Pray, do not kill my son: I consider him my only eye-light; and will take an oath, that I will resign all claims to royalty; and, with my son, depart for the Deccan. Recollect my services to thee, when Salim Shah, intending to put thee to death, I brought him with tears to desist from his intention; and he asked me to let him execute it, if I wished to see my son on the throne: but I, notwithstanding, with supplication and tears, represented to him that I had only one brother, from whose death no advantage would result to his empire; and so prevailed upon him to desist from his design".

All her cries and protests produced no effect upon the heart of Mubariz Khan, who slew with his own hand the young prince, under the very eyes of his mother.

After the murder of Firoz Shah, Mubariz Khan seated himself on the throne, under the title of Muhammad Shah Adil, otherwise known as Adil Shah Suri (r: 1554-1555), though people called him Adali.

Tarikh-i-Salatin-i-Afghana of Ahmad Yadgar / The History of India, as Told by Its Own Historians. Elliot & Dowson

Except Ahmad Yadgar, all other contemporary historians state that Firoz Shah was assassinated within 'three' days after his accession to the throne.
Share
Post a Comment
Labels#Afghans
Newer
Older