Posted onJuly 01, 2019
Mubariz Khan was the son of Nizam Khan, a brother of Sher Shah Suri. After murdering the young prince Firoz Shah, Mubariz Khan ascended the throne of the Sur empire at Gwalior assuming the title of Muhammad Shah Adil (r: 1555). But, he is popularly called Adali. Shamshir Khan, a brother of the late Khawas Khan, was made the vizier.

Now, what's the meaning of 'Adali'? According to Abul Fazl, it is 'Tyrant'; "The people, however used to call him Adali, and went so far as to alter the letters of this name and convert it into Andhali, which means 'blind'", says Badauni. 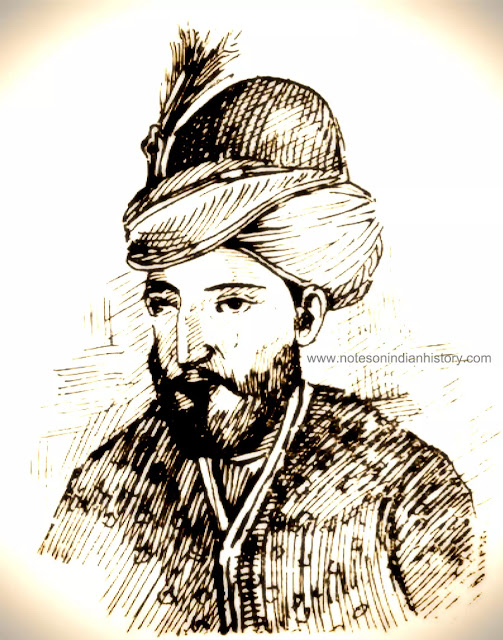 
Hemu, a Hindu shopkeeper of Rewari, and afterwards Superintendent of the Markets, was raised to high dignity. He became the trusted confidant and commander-in-chief of Adali.

Adali was a pleasure-loving king. He neglected state matters and devoted himself to pleasure. Hardly had a month passed since his accession, rebellions arose on all sides and the Sur empire was broken up.

It began thus: Some time after Adali's accession, a council was held at the court, for distributing jagirs. The government of Kannauj was taken from Muhammad Shah Fermuli and transferred to Sarmast Khan Sarwani. Sikandar Khan, son of Fermuli, got enraged on this and abused Sarmast Khan. Sarmishta Khan tried to pacify him, but Sikandar, drew his sword and put him to death on the spot. Seeing this dreadful sight, Adali ran off to his private apartment, who was pursued by Sikandar. At this time, Ibrahim Khan Suri, a brother-in-law of Adali, attacked Sikandar and killed him. Muhammad Shah Fermuli was then killed by Daulat Khan Lohani.

Revolt of the Karranians: From an apprehension of his life being in danger, Taj Khan Karrani, fled from the court to Bengal. Adali sent an army in pursuit of him and also himself started in pursuit. At this time, Hemu promised the king that, if a small force and one hundred elephants should be placed under his command, he would do away with the Karranians. So Adali charged him with the pursuit. Hemu defeated Taj Khan at Chhibramau. He fled towards Chunar and joined his brothers, Imad, Sulaiman Khan and Khwaja Ilyas, who had governed several districts on the banks of Ganges and at Khawaspur Tanda, and raised a rebellion. Adali moved to Chunar and dispatched Hemu with a powerful force against the Karranians. Hemu gave a complete defeat to them, and Chunar was recaptured. [Taj Khan (r: 1564-1566), after his defeat had fled to Bengal, where he founded the Karrani dynasty. He was succeeded by his brother Sulaiman Khan (r: 1566-1572)].

After this victory, Hemu's power increased greatly. Abdullah says that when Hemu returned glorious and triumphant to Adali, who received him with great honour, bestowing upon him the title of Raja Bikramajit. "From that period, the whole management of the State devolved upon him, and so entirely did he assume the mastery, that no public order emanated from Adali, who, however, remained free to regulate his own bread and water, and retained still the treasury and elephants in his own charge", says Abdullah.

When Hemu was made the vizier, he issued public orders, appointments and dismissals. "The Afghan amirs evinced a great repugnance to obey him, and aroused widespread feelings of shame", remarks Badauni and many other historians. 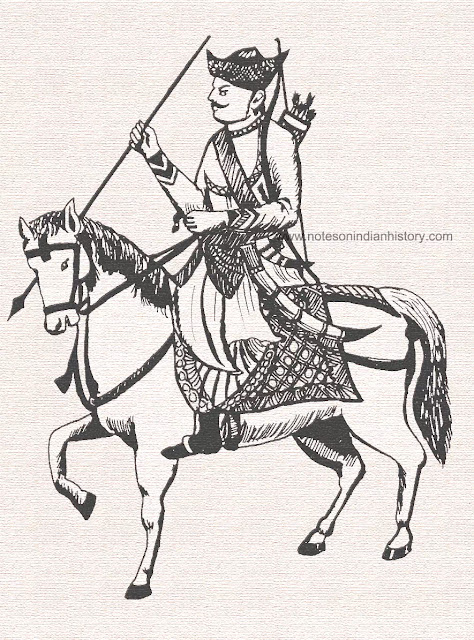 Ibrahim Suri occupies Delhi: About this time Ibrahim Khan Suri, took alarm and fled to his father at Bayana. Adali sent Isa Khan Lohani [some authors have Isa Khan Niazi] to pursue him, but in the following engagement at Kalpi, Isa Khan was defeated. Thereafter, Ibrahim became powerful; he raised an army and proceeded to Delhi, where he ascended the throne. He then marched towards Agra and reduced its dependencies. Adali marched against him, but Ibrahim sued for peace. At this time, he gained over many of Adali's chiefs to his side by a stratagem. Adali was compelled to retreat to Chunar (in Uttar Pradesh).


Sikandar Suri occupies Delhi: Ahmad Khan, governor of Punjab, and also brother-in-law of Adali, declared his independence and assumed the title of Sikandar Suri. He marched against Ibrahim, and gained victory over him near Agra. Sikandar thus got possession of both Agra and Delhi, in addition to Punjab. Ibrahim fled to Sambhal. Sikandar marched to Delhi and subjugated the adjacent provinces while Ibrahim raised a new force and proceeded to Kalpi.

Humayun enters India: Meanwhile, hearing the news of civil war among the successors of Salim Shah Suri, Humayun marched to Hindustan to recapture his empire. Sikandar proceeded to Punjab to oppose him. In the action, Sikandar was defeated who fled towards the mountains of Punjab.

When Adali heard of Ibrahim's arrival at Kalpi, he sent his minister Hemu towards Agra and Delhi, with directions that he should first attack Ibrahim, and then advance subsequently to Agra. At Kalpi, Hemu attacked Ibrahim and achieved a great victory. Ibrahim fled to his father at Bayana. Hemu pursued him and closely invested the fort of Bayana for three months.

Meanwhile, Muhammad Shah, governor of Bengal, raised the standard of rebellion and marched to conquer Jaunpur, Kalpi and Agra. Adali, being informed of this, ordered Hemu to raise the siege of Bayana and return to his presence.

When Hemu had reached Mundagar, Ibrahim came out of the fort and forced him to action, but repulsed. Ibrahim fled towards Rewa and fought with Raja Ram Chand Baghela. Ram Chand was victorious in contest and made Ibrahim Sur a prisoner. He, however, treated Ibrahim with great honour. After some time Ibrahim obtained his release by the interpose of the Miana Afghans of Raisen. They made Ibrahim their chief for carrying on their struggle with Baz Bahadur, the ruler of Malwa. Rani Durgavati, ruler of Garha Katanga, also marched to assist Ibrahim. But Baz Bahadur made overtures for peace and dissuaded the Rani from assisting Ibrahim. Ibrahim, not considering it advisable to remain there any longer, went towards Orissa, where he was treacherously put to death by Sulaiman Khan Karrani, in 1567.

Humayun occupies Delhi: After the defeat of Sikandar Suri, Humayun entered Delhi in triumph and became the king of India for the second time, in July 1555. His son Akbar was sent to Punjab to check the advance of Sikandar Suri [Afterwards Sikandar surrendered to Akbar. He died at Bengal in 1559].

Death of Muhammad Suri: On his return to Adali, Hemu engaged Muhammad Shah Suri at Chhapparghatta in December 1555, and killed him.

Humayun's Death & Accession of Akbar: Adali after this victory, was assembling more troops in order to carry on the war against Humayun. But then he received the news of Humayun's death, and the coronation of his son Akbar at Punjab.

Hemu: Defeat and Death: Adali dispatched Hemu with fifty thousand horse and five hundred elephants towards Agra. When Hemu arrived Agra, the Mughal governor Sikandar Khan Uzbek, abandoned the place and fled to Delhi. After occupying Agra, Hemu marched towards Delhi, where he fought with Tardi Beg Khan, Mughal governor of Delhi, and defeated him. Thus Hemu was everywhere victorious.

After a stay of few days at Delhi, Hemu marched against Akbar, who was on his way to Delhi accompanied by his guardian Bairam Khan. A fierce battle was fought at Panipat on 5 November 1556, in which Hemu was captured and slain. Hemu's defeat in the 2nd battle of Panipat made Akbar to re-establish the Mughal empire in India.

Adali was at Chunar when he heard the news of Hemu's death. Meanwhile Khizr Khan, son of Muhammad Shah Sur, succeeded his father at Bengal under the title of Ghiyasuddin Bahadur Shah (r: 1555-1561). In order to avenge the death of his father, Khizr Khan marched against Adali. Adali had only a few men with him, but fought bravely. In this action fought at Surajgarh, Adali was defeated and slain. This event happened in 1556-57.

His son succeeded Adali at Chunar assuming the title of Sher Shah. He set forth to capture Jaunpur. Khan Zaman was the governor of Jaunpur, under Akbar. The Mughals put the Afghan army to flight. Adali's son was never heard of again. Thus ended the dynasty of Sher Shah Suri.

Adali was highly skilled in singing and dancing. Miyan Tansen, the great musician, and Baz Bahadur were his pupils.

The History of India, as Told by Its Own Historians. Elliot & Dowson

Abul Fazl says that Hemu did not know how to ride a horse, but always rode on an elephant. In that case, the illustration of Hemu given here is a false representation.
Share
Post a Comment
Labels#Afghans, #Mughal
Newer
Older