A sarai or inn is a resting place for travelers and pilgrims on the roads. It was Sher Shah Suri who built sarais on a large scale. During the Mughal rule sarais were built all over India.

The town Nurmahal is famous for a Sarai built there by Nur Jahan in 1620-21. This building provided accommodation for about 100 people. [There is another Nurmahal sarai at Agra built by Nur Jahan; perhaps a copy of the original sarai at Jalandhar.] 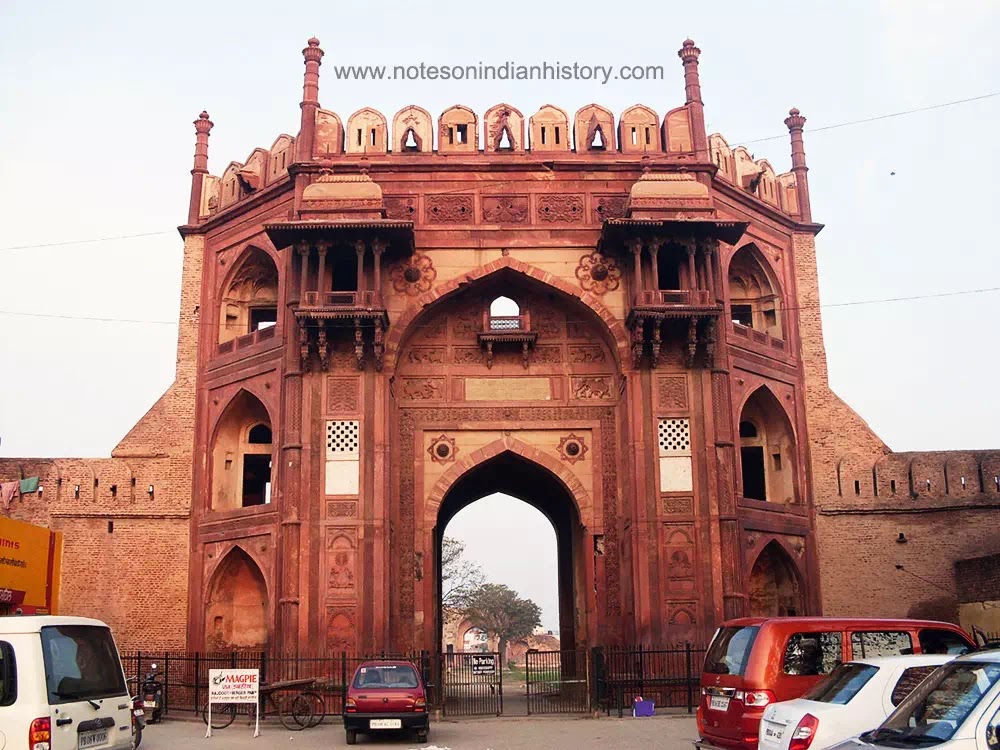 The sarai is 551 feet square and has octagonal towers at corners. The western gateway or the Lahore gate is a double storeyed structure with a coating of red sandstone. The front is divided into relief panels ornamented with sculpture. There are figures of angels, lotuses, fairies, elephants, riders, lion fights, rhinoceroses, camels, monkeys, peacocks, men on horseback etc.

The sides of the gateway are embellished with foliated scroll-work depicting birds sitting on branches. There are geometrical patterns also.

The eastern gateway also bore similar decorations, but this is now only a mass of ruin. There was an inscription over this gateway, which was preserved by a localite: 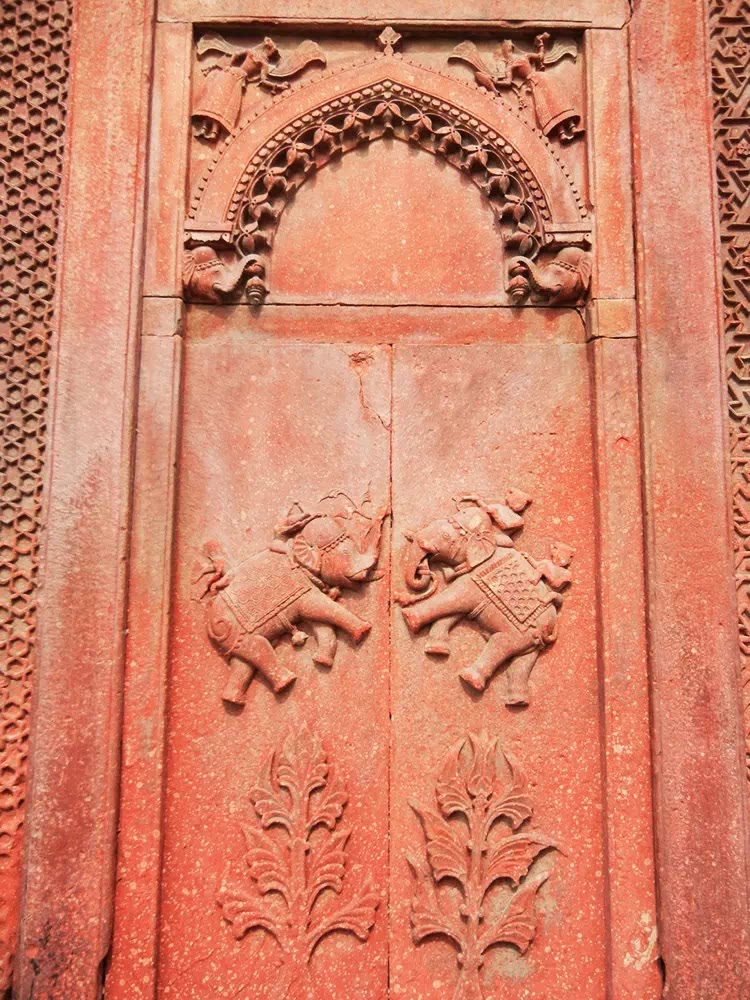 Over the East or Delhi Gate:

During the reign of Jahangir Badshah, Lord of the Universe, King of Kings of this world and his time, the shadow of God.

The fame of whose goodness and justice overspread the earth. Until it reached even the highest heavens above.

His wife and trusted companion, Nur Jahan, commended the erection of this sarai wide as the heavens.

When this fortunate building rose upon the face of the earth, May its walls last for ever and ever!

The date of its foundation wisdom found in the words "This sarai was founded by Nur Jahan Begum". 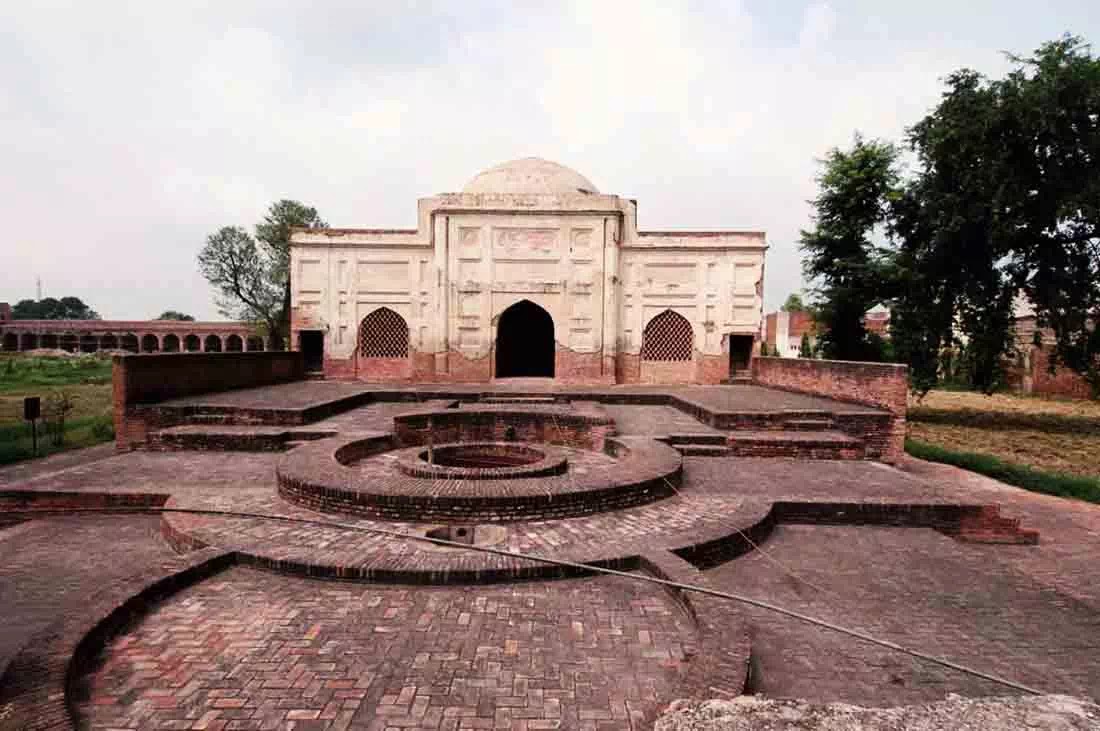 In the courtyard of the sarai there is a well, bath house (Hammam) and a masjid covered with a single dome. On each side of the courtyard there are 32 rooms, each 10 feet 10 inches square, with a verandah in front of it. In each corner of the sarai there were 3 rooms, one large and two smaller ones. Three-storeyed apartment in the center of the southern side were reserved for the emperor. The main room was oblong in shape, with a semi-octagonal recess on two sides, similar to the large rooms in the corners of the sarai.


'The great mass of imperial followers found their quarters outside in an exterior court about 2,000 feet square, some of the walls of which were pointed out to me in November 1838; all these have disappeared now', writes Cunningham in his report. 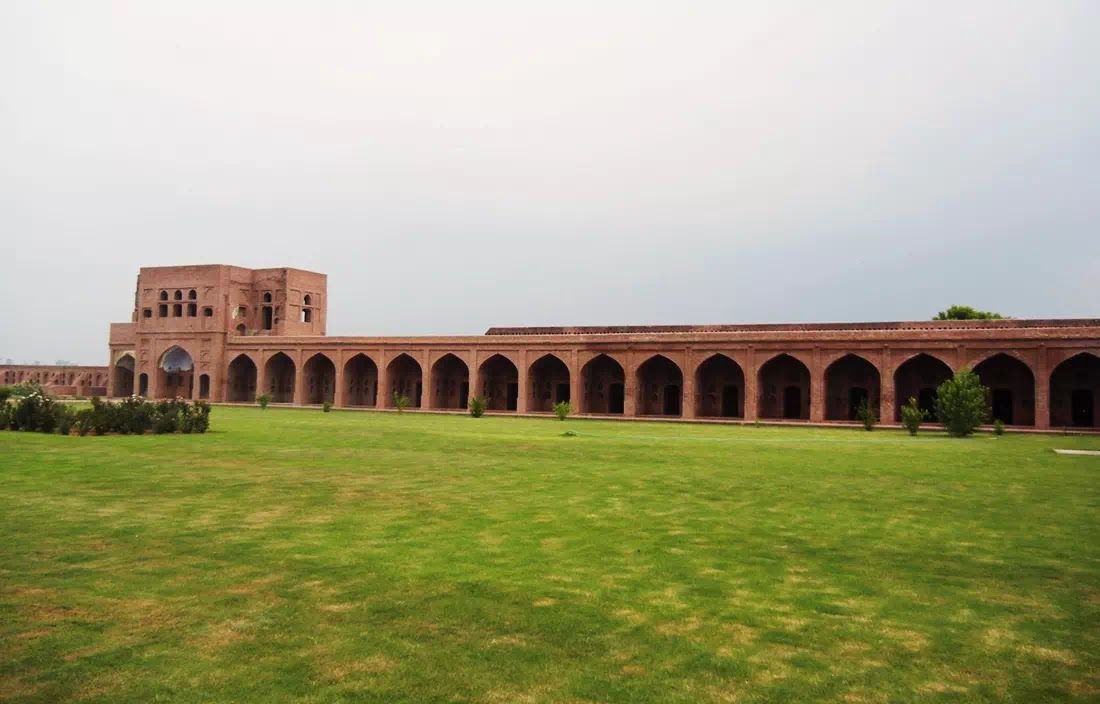 Over the West of Lahore Gate:

During the just rule of Jahangir Shah son of Akbar Shah whose like neither heaven nor earth remembers.

The Nur Sarai was founded in the district of Phillaur; by command of the angel-like Nur Jahan Begum.

There is a second inscription on the western gateway mentioning certain Zakaria Khan, the Nazim of the subah of Jalandhar, which was added much later. Nawab Zakaria Khan who received the title of Khan Bahadur in 1737 was the governor of Lahore and Multan. It seems that during his peaceful rule sarai taxes were abolished. The inscription is as follows:

"Taking payment from travelers is forbidden, the Nawab Zakaria Khan Bahadur, Governor of the District having exempted them. Should any Faujdar of the Doab collect these dues, may his wife be divorced".

Jahangir mentions this sarai in his Memoirs: 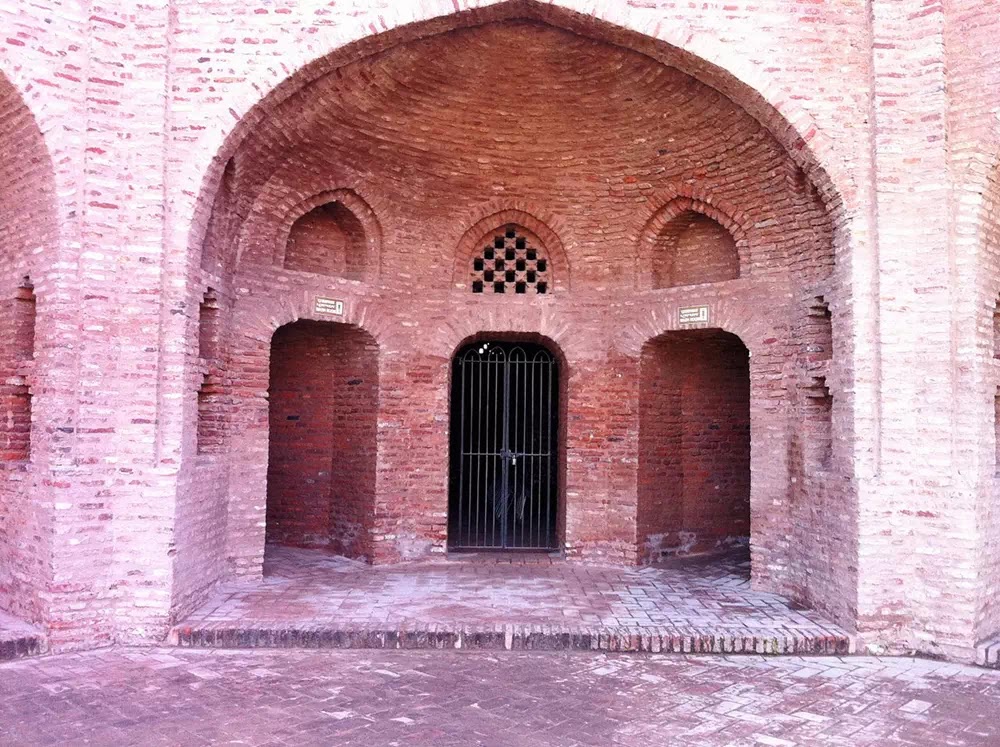 "On the twenty-first [January 2, 1621] camp was made in Nur Sarai. Here Nur Jahan Begum's agents had built a fine palace and regal garden. Since it had recently been completed, the begum requested that I attend an entertainment. She arranged a splendid and very elaborate party at which she presented all sorts of rare items and objects. To please her some things 1 liked were taken. We halted at this station for two days."

Mughal Monuments in the Punjab and Haryana By Subhash Parihar