Posted onAugust 28, 2020
We know that Abul Fazl, historian and intimate companion of emperor Akbar, was murdered at the behest of Jahangir. Jahangir confesses this in his Memoirs, "I employed the man who killed Abul Fazl and brought his head to me and for this it was that I incurred my father's deep displeasure" (Price/Jahangir). The 'man' whom Jahangir 'hired' to assassinate Abul Fazl was Vir Singh Bundela. In Persian records he is known as 'Bir Singh Deo' and 'Nar Singh Deo'. 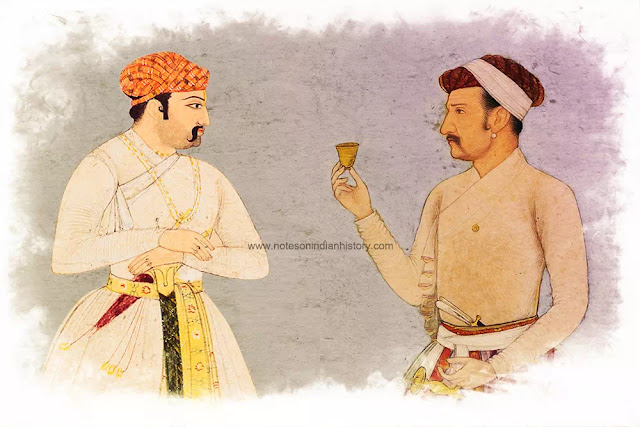 
Bundela Revolts in the Reign of Akbar:

Madhukar Shah (r: 1554-1592) succeeded his brother Bharti Chand in 1554. He challenged Akbar's authority. Sometimes he submitted to Akbar; sometimes he rebelled. He died in 1592.

On the death of Madhukar Shah his eldest son Ram Shah [also known as Ram Chand] offered his submission and was recognized as the ruler of Orchha (r: 1592-1605) by Akbar. With this started internal revolts among the Bundelas.

Vir Singh Dev, younger brother of Ram Shah, who held the jagir of Barauni [in Datia], rebelled against his brother. He often led plundering expeditions into the nearby territories, sometimes assisted by his other brothers Indrajit and Pratap Rao, and seized a number of territories belonging to his brother Ram Shah and Akbar including the fort of Erach.

Akbar sent three successive military campaigns against Vir Singh from 1592-1599. He adopted a conciliatory policy against Vir Singh and offered him liberal terms. The first expedition was led by Raja Askaran of Gwalior and Ram Shah. Second expedition was led by Abdur Rahim Khan-i-Khanan, Ram Shah and others in 1594. In 1599 Raj Singh was sent against him. Not satisfied with the terms offered, Vir Singh rebelled again. In the end he was defeated, but the Mughals could not suppress him.

When Akbar was busy with campaigns in the Deccan, prince Salim rose up in rebellion and established his court at Allahabad (1599-1604). Hearing this news Akbar hurried to Agra after appointing prince Daniyal the Viceroy of Deccan. He summoned Abul Fazl from Deccan to Agra with a plan to appease prince Salim and bring him back to Agra.

In the meanwhile, due to the continuous war with the troops of Akbar and Ram Shah Vir Singh's position was very critical; he wished some help from outside. He was advised by his commander Yadav Gaur to seek help from prince Salim who had rebelled and established himself at Allahabad. Vir Singh presented himself before the prince at Allahabad in 1599 through one Sharif Khan and courted his favours.

Salim considered Abul Fazl his greatest enemy. In August 1602, he got the news of Abul Fazl's summons from Deccan to Agra, which alarmed him greatly. He asked Vir Singh to waylay and kill Abul Fazl when he pass through Bundelkhand on his way to Agra.

When Abul Fazl reached Sarai Vir near Gwalior, Vir Singh and his men surrounded him and the few servants he had with him. Vir Singh severed the head of Abul Fazl and brought it to Barauni and Champat Rai (an associate of Vir Singh and father of Chhatrasal Bundela), later carried it to prince Salim at Allahabad. Abul Fazl's tomb is located at Antri.

"Vir Singh, you have given an empire to me...I shall give a kingdom to you", said Salim. 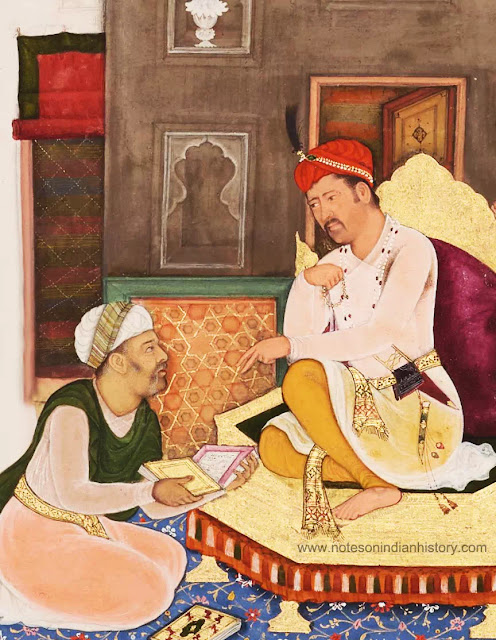 When Akbar heard of this murder he was extremely grieved. He at once ordered Rai Rayan Patra Das Khatri and others to destroy Vir Singh and 'and not to rest till he had severed his head from his body'. When Salim heard of this he sent a message to Vir Singh to be cautious. Rai Rayan defeated Vir Singh in several engagements, who fled and took refugee in the fort of Erach. The imperialists closely besieged the fort but he managed to escape to Datia where he found prince Salim waiting for him.

Rai Rayan was afterwards recalled 'as Vir Singh had become a vagabond in the desert of destruction'.


Prince Salim finally submitted to Akbar on the sad occasion of Maryam Makani's [Hamida Banu Begum] death in August 1604, [on the request of Vir Singh according to Virsinghdev Charitra].

After the departure of the imperial troops, Vir Singh's established friendly relations with other princes of his family and recovered some of the provinces he held earlier. In the end of 1604 Shaikh Abdur Rahman, son of Abul Fazl, Abdullah Khan, Raja Raj Singh and the Rai Rayan were dispatched against Vir Singh. Vir Singh, who was severely defeated, managed to escape with few followers. The Mughal army pursued him and in the following encounter with Raja Raj Singh, he was seriously wounded and had a narrow escape. After a few months it was reported to Akbar that Vir Singh had thrown poisonous plants into the wells of Orchha and many people had died of fever. So the imperial forces had to withdrawn from Orchha.

Akbar decided to launch another expedition against Vir Singh, but his illness prevented him from executing the plan. Akbar died on 15 October 1605. Prince Salim succeeded him as Jahangir.

On his accession Jahangir made Vir Singh the ruler of Orchha (r: 1605-1627) after deposing Ram Shah.

Bundela Revolt in the Reign of Jahangir:

Ram Shah revolted but he was defeated by Vir Singh with the help of imperial forces under Abdullah Khan in 1607. Afterwards Jahangir appointed him as the Raja of Chanderi and married his daughter.

Jahangir writes in his Memoirs: "Raja Vir Singh Dev was one of the Bundela Rajputs patronized by me. In courage, innate goodness and guilelessness he shone among his peers. I promoted him to the rank of 3000 [afterwards it became 5000]. The reason for his promotion was" the murder of Abul Fazl!

"Toward the end of my exalted father's reign, Shaikh Abul Fazl, one of the shaikhzadas of Hindustan who was outstanding in his learning and wisdom, had ostensibly adorned himself with loyalty and sold it to my father for an exorbitant price. He was summoned from the Deccan, and since he was suspicious of me he was always making snide remarks. At that time, because of the corruption of mischief-makers, my exalted father's mind was quite turned against me, and it was certain that if Abul Fazl succeeded in reaching him he would create more discord and prevent me from rejoining my father. It was therefore absolutely necessary that he be prevented from reaching him. Since Vir Singh Dev's territory lay in his path, and at that time Vir Singh was in the circle of insurgents, I sent him a message that he should waylay the miscreant and dispatch him to nonexistence, in return for which he could expect great rewards from me.....as Abul Fazl was passing through Vir Singh Dev's territory, Vir Singh blocked his path, scattered his men in a skirmish, and killed him, sending his head to me in Allahabad. Although this caused distress to His Majesty, in the end it resulted in my being able to proceed to kiss the threshold of my exalted father's court without fear, and little by little the bad blood between us subsided.".

The bestowal of rapid promotions and high mansabs on Raja Vir Singh continued and in 1623 Raja Vir Singh Dev, "than whom there is no greater amir among the Rajputs", was honoured with the title of Maharaja.

Akbarnama calls Vir Singh 'a highway robber, who for a while had been in the prince's service'. According to Virsinghdev Charitra, Vir Singh at first entreated Salim to pardon the Shaikh as the relation between them was that of a master and a servant. Salim told him that "so long as the Shaikh is living I am a dead man". At last he prevailed on him and tied his own sword round the waist of Vir Singh, and sent him off with Muzaffar Khan and others.

Abul Fazl had learnt from his men even in the Deccan that Vir Singh was on his plundering expeditions. Still he decided to pass through the hostile territory.

When Abul Fazl reached Sironj, he left the the troops he had brought with him from the Deccan with Asad Beg to fight against Indrajit Bundela and continued his march with the fresh troops provided to him by Gopal Das, ruler of that region.

Abul Fazl was informed of the intending attack by Vir Singh when he reached Narwar [between Sarai Vir and Antri], but he did not pay much attention to it and dismissed the informer. Next morning when Abul Fazl was about to continue his march the troops of Vir Singh appeared from behind the Sarai and fell upon the camp. His companions requested Abul Fazl to take a safer route, but he said that it was against the will and prestige of a commander to run away due to fear of a rebel. Gadai Afghan, seizing the bridle of the Shaikh's horse prepared to escape to the hills, but just then the Rajputs made an onslaught.

"A Rajput came up and struck the Shaikh with a spear in the back, so that it came out through his breast. There was a small stream in the place, and the Shaikh tried to leap his horse over it, but he fell in the attempt. Jabbar Khassakhail, who was close behind, slew that Rajput, and then dismounting, drew the Shaikh from under his horse and carried him a little off the road; but as the wound was mortal, the Shaikh fell. Just then Vir Singh came up with rest of the Rajputs. The driver of the Shaikh's elephant was with him, and pointed out his wounded lord. As soon as Vir Singh saw him, he dismounted, and taking his head upon his knees, began to wipe his mouth with his own garment. Jabbar, observing from behind the tree that Vir Singh was in a compassionate mood, came forward and saluted him....Just then the Shaikh unclosed his eyes. Vir Singh, sitting as he was, saluted him, and telling his attendants to bring the farmans, said to the Shaikh with blandishment, "The all-conquering lord has sent for you courteously." The Shaikh looked bitterly at him. Vir Singh swore that he would carry him in safety to him. The Shaikh began to abuse him angrily".


Vir Singh's men said that he was heavily wounded and could not be saved. Jabbar, in desperation, drew his sword and killed several Rajputs. He then advanced towards Vir Singh. Vir Singh's men immediately killed him and trampled him under foot. Vir Singh at last stood up, and his attendants dispatched Abul Fazl and cut off his head.

Vir Singh is known in history as the murderer of Abul Fazl. From Asad Beg's account we learn that it was not a treacherous murder but the result of a battle. It is also clear that Vir Singh himself did not kill Abul Fazl.

Maharaja Vir Singh was a great warrior and the most powerful of the Bundela chiefs. The court poet Keshavdas wrote his famous Hindi poem Virsinghdev Charitra (1607) in his name.

Bundela architecture flourished during Vir Singh's reign. Jahangir gave him permission to build the Keshav Rai temple at Mathura, which he did at the expense of thirty-three lacs of rupees. Unfortunately this temple was destroyed by Aurangzeb during the Jat rebellion at Mathura.

Vir Singh built the fort of Jhansi, Palace at Datia, Phool Bagh at Orchha and completed the Chaturbhuj temple at Orchha. He built three large tanks namely Bir Sagar in Orchha, Singh Sagar in Kundar and Dev Sagar at Dinara. Jahangir Mahal at Orchha was built for Jahangir. According to Orchha State Gazetteer only in December 1618 itself, he laid the foundations of 52 buildings. 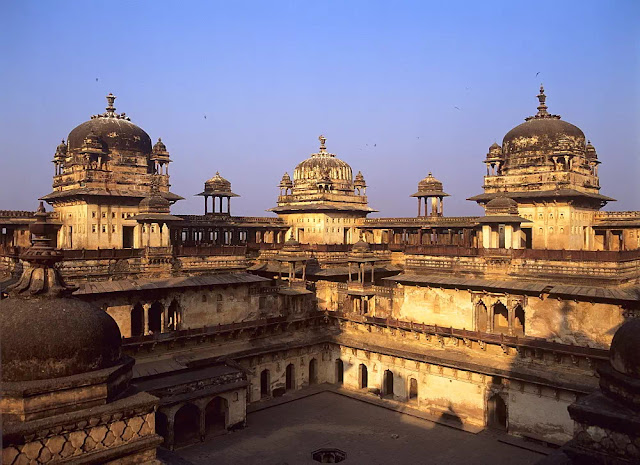 Vir Singh died in 1627, a few months before the death of his patron Jahangir. His cenotaph at Orchha stands on the edge of the Betwa river. He was succeeded by his eldest son Jujhar Singh (r: 1627-1634).

A note on the Historicity of Keshav's Virsinghdev Charitra By Gupta. B. D

Murder of Abul Fazl: A Re-appraisal By Amir Ahmad