Posted onFebruary 08, 2021
Followed by Tipu Sultan's defeat in the 3rd Anglo-Mysore war, he had to sign a treaty of peace by ceding a large part of his dominions and a substantial financial settlement to the British. The Governor-General Lord Cornwallis also demanded two of Tipu's sons as hostages to ensure that the Treaty was fulfilled. Thus the young princes Abdul Khaliq, Tipu's second son aged ten, and Muiz-ud-din, his third son aged eight were surrendered to Lord Cornwallis as hostages. [On the fulfilment of the conditions, two years later the princes were restored to their father Tipu.]
Robert Home, the artist accompanied Cornwallis's army in Mysore and made numerous sketches of incidents on campaign.
This event is also depicted by Mather Brown, Arthur William Devis, F. Bartolozzi, Henry Singleton, Joseph Grozer and many other artists from hearsay, while they were in England.
The title of the painting varies from 'Delivery of the Definitive treaty by the Hostage Princes into the hands of Lord Cornwallis'; 'The Marquess Cornwallis receiving the Hostage Princes'; 'The Hostage Princes delivering the definitive treaty to Lord Cornwallis'; 'The Departure of the Sons of Tippoo'; 'The sons of Tippoo Sultan leaving their father'; 'The departure of the son's of Tippoo from the Zenana'; and the list goes on.
In Mather Brown's version, the officers shown on the left of the Governor-General are Sir John Kennaway, Major Dirom, Col. Malcolm, Major Madan, A.D.C., and Col. Ross. On Lord Cornwallis' right is the head Vakil Ghulam Ali Khan, seated, while his colleague bends over the boys.
Oil on Canvas by Robert Smirke - Yale Center for British Art 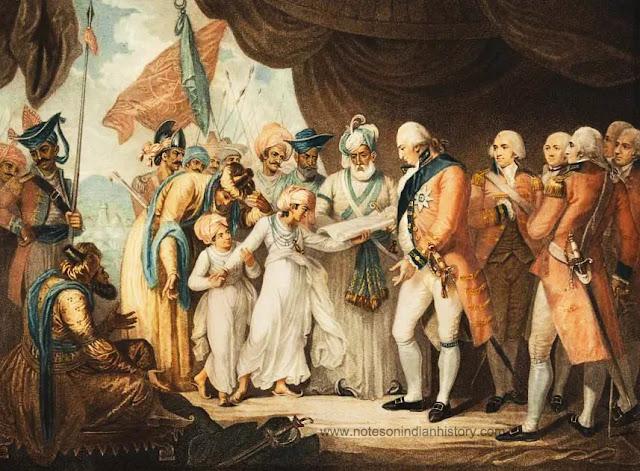 'The Delivery of the Definitive Treaty by the Hostage Princes into the Hands of Lord Cornwallis', Hand-colored stipple engraving by Daniel Orme, 1793 After Mather Brown - Doyle Auction House