Posted onOctober 06, 2021
After the fall of Bijapur and Golconda in 1686 and 1687, the Marathas were the only enemy left whom Mughal emperor Aurangzeb (r: 1658-1707) had to subdue for completing his conquest of the Deccan. In February 1689, he succeeded in capturing Sambhaji, Chhatrapati Shivaji's eldest son. Sambhaji was executed in March 1689.

After the capture of Sambhaji, Rajaram (r: 1689-1700), Sambhaji's younger half-brother who had been kept in prison, was declared the Maratha king at Raigarh. Aurangzeb sent Zulfiqar Khan to capture Raigarh, capital of the Marathas.

On the fall of Raigarh in October 1689, the widows of Shivaji and Sambhaji together with the wives, daughters and sons of Rajaram including the young Shahu were captured by the Mughalas.

However, before the capture of the fort, Rajaram disguised himself as a yogi and fled from Raigarh (April 1689). Aurangzeb sent Sayyid Abdullah Khan Barha and Bahadur Khan in pursuit of him.

Rajaram's journey from Raigarh to Gingee in Tamil Nadu is mentioned in the Sanskrit work Rajaramacharitam of Keshav Pandit. From Raigarh he went to Pratapgarh with few followers and from there to Panhala [in Maharashtra]. Still being chased by the Mughals, he came to the bank of the river Tungabhadra.

Aurangzeb's spies gave him news that Rajaram had gathered about 300 followers and had entered the dominions of the Rani of Bednore.

Pursuing Rajaram, Abdullah Khan crossed Tungabhdra and reached the boundaries of Bednore. The Marathas who had taken refuge in an island in Tungabhadra were attacked at night. In this fierce fighting, many Maratha soldiers died and the Mughals captured several Maratha generals like Hindurao, Yekoji, Bahirji, Manaji Ghorpade, Rupaji Bhosle (Rupa Singh Bhonsle), Santaji Jagtap, Manaji More and Sharjarao Gadhe. In the midst of this fighting, Rajaram managed to escape.


After crossing the river Tungabhadra, Rajaram with a small number of followers, disguised as yogis, proceeded towards the kingdom of Bednore in Karnataka.

The Keladi Nayakas of Bednore (also known as Ikkeri, Kanara & Nagara), once a feudatory under Vijayanagara, remained in power till its last queen Rani Viramma was overthrown by Hyder Ali in 1763. 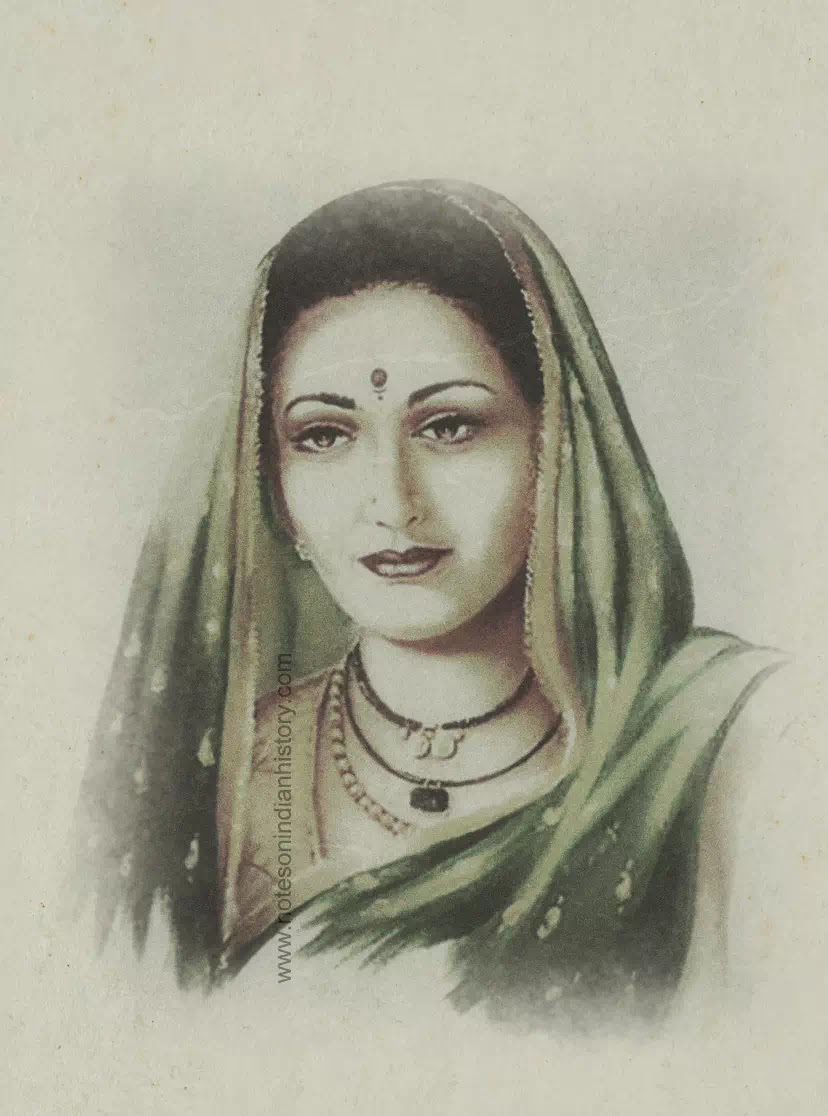 Keladinripavijayam of poet Linganna tells that on arriving near Ponnali [Honnali], Rajaram dispatched his men to Channamma informing her about his deplorable condition and requested her to arrange a safe passage to escape to Gingee. She held a council of ministers and it was decided to give protection to the refugee; and helped the fugitive to escape to Gingee via Gajanur, Bore, Nadahalli, Aduvalli, Kalas, Khandya and Vasudhare (Vastare).

Aurangzeb meanwhile got information that Channamma gave protection to Rajaram. He demanded her the surrender of Rajaram and dispatched the following order, 'The presence of Rajaram in your dominion is against the exalted wishes. Soon after the receipt of this imperial order you must arrest and send him escorted by your soldiers to the royal presence through Abdulla Khan'.

However, in reply to Aurangzeb's order, Channamma denied the charges, 'Rajaram has not come to this place. Abdulla Khan has captured Rupa Singh Bhonsle with his followers and I am sure that fugitive is among them'.

As she was suspected of concealing Rajaram, Aurangzeb ordered Jan Nisar Khan (Aurangzeb's son Azam Shah according to Keladinripavijayam and Portuguese account; Abdullah Khan Barha and Bahadur Khan according to Futuhat-i-Alamgiri) to invade Bednore.

Keladinripavijayam states that when Aurangzeb demanded the surrender of Rajaram, she replied that Rajaram had passed through her kingdom but currently not staying there. She also stated that she was able to take possession of some ornaments, horses etc. that fell from the Maratha prince while he was passing through her dominions; and handed over the same to Aurangzeb's men. Aurangzeb's officers informed him that although the Queen had delivered them the belongings of the fugitives, she refused to surrender them and therefore Aurangzeb determined on the destruction of Bednore. She sent a huge army to confront the Mughals and the latter suffered defeat and concluded a treay with Channamma.

Authors like I. M. Muthanna and Naraharayya S.N. have gone one step ahead and state that she refused to surrender Rajaram and defeated the Mughal army headed by Aurangzeb in person!

✿✿✿
But Mughal records reveal that Channamma was forced to sue for peace with the Mughals by paying tribute to Aurangzeb.

Masir-i-Alamgiri tells us that the Maratha chieftain Santa Ghorpade triumphantly resisted Jan Nisar Khan, Matlab Khan and Sharza Khan, and at last the affair of the Rani ended in her paying a small money-tribute under the name of fine.

Ishwar Das Nagar gives more details of this event: She tried her best to protect her kingdom from destruction. In the Mughal raid, many villages and districts were destroyed. She left Bednore fort and took refugee in the fort of Komgarh [could be Kavaledurga], which was known for strong fortifications. From there she sued for peace and wrote to Aurangzeb, 'A few selfish persons have reported to you about the coming of Rajaram to me, which is not correct. He came to me but there have been differences between us since long. So I did not allow him to stay here and he went back to his uncle. Thus humble-self is still faithful to you, how can anything against the wishes of your Majesty be done by me? I have, however, full faith in your benign kindness that the utterances of wrong persons and loose talkers would not be believed. I pray that the victorious army, which has been appointed to plunder my dominions, be called back so that peace and order may be maintained there'.

When Aurangzeb received this reply, he pardoned her and recalled the army from Bednore. It was ordered that the Rani should pay 8 lakh rupees per year as tribute. Plus she would pay 2500 hanas and should also send 500 horsemen and 2000 foot-men in accordance with the custom to Talkonkan so that they might serve under the faujdar of that place. Aurangzeb also conferred upon her a robe of honour, an elephant, five horses and other commodities which were handed over to her vakil.

After receiving the order and gifts she sent another message thanking Aurangzeb, along with 115000 hanas, two elephants and ten horses. Masir-i-Alamgiri records in 1693 that, 'the agent of the Rani of Bednore presented her letter and tribute consisting of 300 hana'.

It seems that Bednore was already a tributary of the Mughals. Ishwar Das in his Futuhat-i-Alamgiri mentions a six month's Mughal campaign against Rani Channamma by Zulfiqar Khan during May 1688, who at last submitted (History of Aurangzib Vol 4 Southern India 1645-1689); and the arrival of her vakil at Delhi: 'Ankuji, the vakil of the Rani arrived at the Delhi court and paid his respects to the emperor....The emperor sent a wrapper, a dushala, a female clothes consisting of embroidered sari etc., and other articles for her and a special robe, an elephant and two horses for her son [Basavappa Nayaka]. It was ordered that the Rani, "who owes to pay the tribute of 8 lakhs rupees should pay like this: 5 lakhs to the emperor, 2 lakhs to the treasury of Bijapur and 1 lakh to Zulfiqar Khan". Two or three ahadis were dispatched to enforce the payment'.

Ishwar Das also mentions that Rajaram was one of her relatives and because of this she gave him protection. In fact, Rajaram's father Shivaji had given her protection against the rebel chief Timmanna Nayak in 1675. [According to Muni Lal, once Sambhaji had saved her from humiliation at the hands of tribal bandits.]

An order of Rani Channamma dated 1691 mentions the Mughal oppression of 1689 (79 - Epigraphia Carnatica, Vol. VII- Inscriptions in the Shimoga District). A Portuguese record of 1691 reports that the Rani suffered defeat at the hands of the Mughals.


A letter written by the Portuguese Viceroy to the king of Portugal dated January 1691, describes that Channamma allowed Rajaram to pass through her country and Aurangzeb sent a division of his army under his son Azam Shah to chase him. Azam Shah surrounded the Rani in such a way that the latter after taking several of her fortresses and entering her court at Bednore had compelled her to retreat and seek peace, surrendering three forts (perhaps Madhavpura, Ananthapur, Mahadevapura) out of those which she had in the Ghats and belonged to Adil Shah and offering to pay him in three years 18 lakhs of pagodas. She immediately handed over to him six lakhs representing the first year's installment. In order to pay such a large sum of money the Rani has imposed heavy taxes on her subjects to their great vexation.

Muni Lal in his 'Aurangzeb' says that Channamma was pardoned by Aurangzeb at the instance of his Prime Minister Asad Khan. He also narrates a story according to which Asad Khan's son Zulfiqar Khan was in secret love with the Rani, and remarks that Rajaram's escape to Gingee was a fairly complicated tale of love's conflict with loyalty!