Posted onSeptember 21, 2021
Chitradurga (Chitaldrug of the British) in Karnataka was governed by local chieftains well before the rise of the Vijayanagara empire. By the 1500s, it was largely dominated by Bedar (Valmiki) families who traced their origins to southern Andhra Pradesh. They attracted the attention of the Vijayanagara rulers through various acts of bravery. Matti Thimmanna Nayaka was the first Nayaka of Chitradurga appointed by the Vijayanagar emperor Saluva Narasimha Raya. 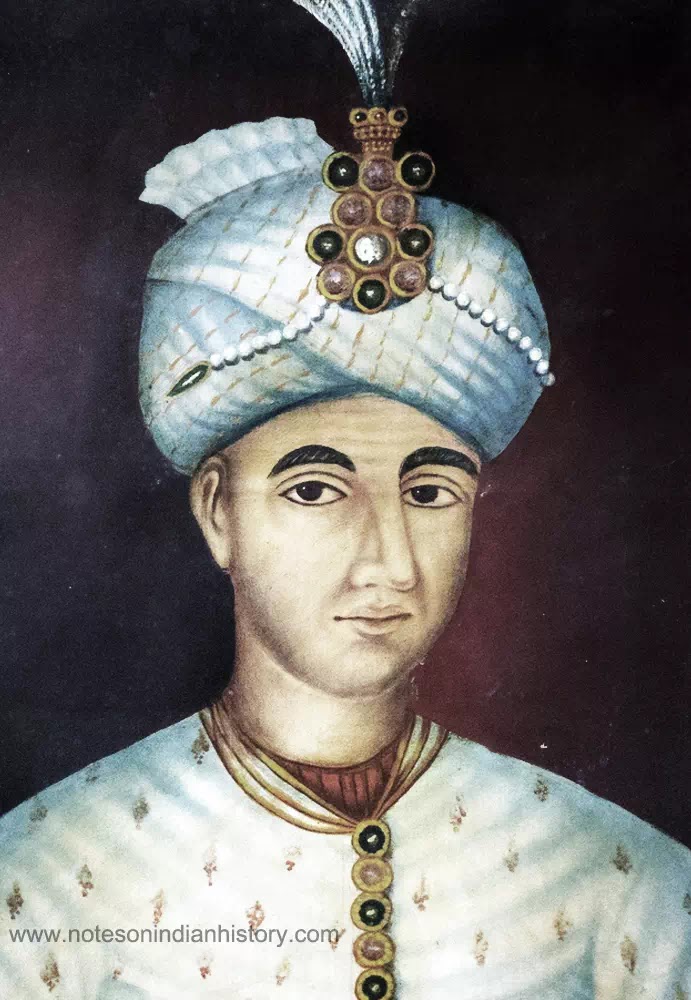 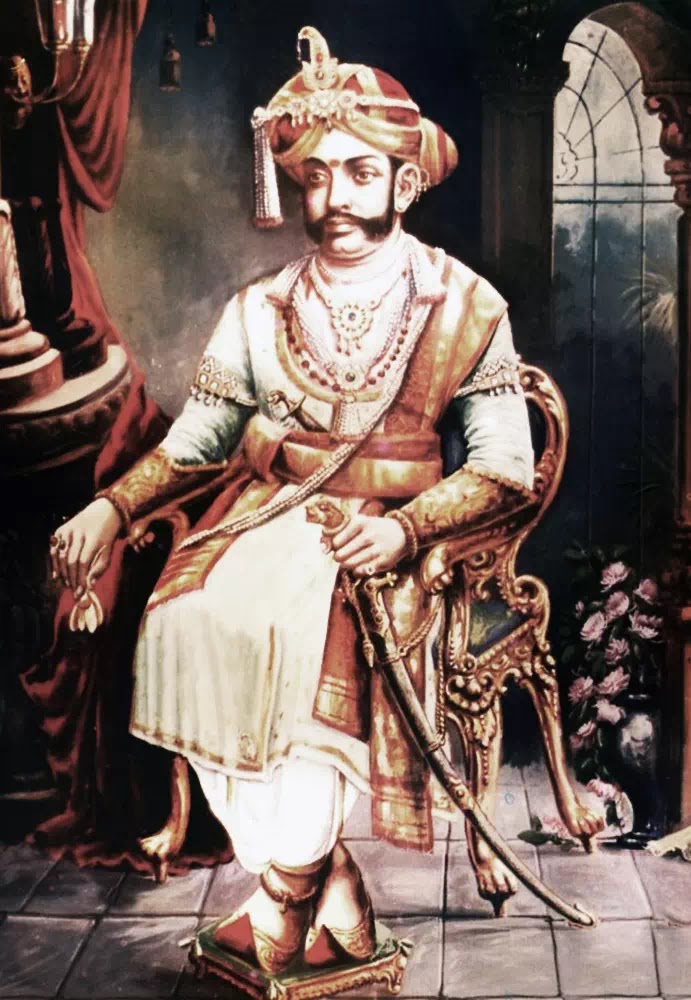 After the fall of Vijayanagara in 1565, most of the Karnataka Palegars/Paleyagars declared their independence such as the Nayakas/Palegars of Chitradurga, Madura, Mysore, Keladi, Tanjore, Gingee etc.

The Madakari Dynasty of Chitradurga came to an end when Nawab Hyder Ali Khan of Mysore (r: 1759-1782) defeated Madakari Nayaka V in 1779.

The hill fort of Chitradurga has seven circular walls one behind the other. Hyder Ali attacked this impregnable fort for the first time in 1762. Madakari Nayaka made peace with Hyder (meaning: lion) and paid four lakh rupees as tribute (according to Wilks 6 lakhs including fine). He joined Hyder to capture Bednore (also known as Ikkeri/Keladi/Nagar) from Rani Viramma in 1763.

The Nayaka also assisted Hyder in his campaigns against Bankapur and against Peshwa Madhav Rao (r: 1761-1772) at Anavatti in 1763.

Madakari Nayaka turned against Hyder and allied himself with the Marathas when Madhav Rao captured Nijagal in 1770.

In 1776 Madakari Nayaka helped Hyder when the latter besieged Gooty and captured its ruler Murari Rao Ghorpade, but allowed Shivaram Bhau, nephew of Murari Rao to escape from Madakasira to Pune by the way of Chitradurga.

In early 1777, when Mysore was attacked jointly by the Marathas under Parashuram Bhau and the Nizam's army under Ibrahim Khan Dhoonsa, the Nayaka did not assist Hyder. According to Hydernama, it was the Nayaka himself who invited them to invade Mysore.

Prejudiced by the Nayaka's conduct, Hyder appointed a news writer to keep a close watch over him. Intolerant of this, the Nayaka dispatched his vakil to Pune court to persuade the Marathas to undertake a campaign against Mysore. The Marathas assured him that they would send an immense army to invade Mysore and permanently relieve him from Hyder's interference.

Meanwhile, Krishnappa of Rayadurga incited Hyder to attack Chitradurga. Hyder also secured the assistance of the chief of Harapanahalli. Before launching the attack, Hyder proposed the surrender of Madakari Nayaka's capital and accept the Mysore service and a jagir of 50000 rupees annually, but the latter refused.


In July 1777, Hyder laid siege to the fort. It continued for three months. The Bedars valiantly defended the fort. On every Monday they penetrated into the trenches, and carried back a certain number of heads of Hyder's soldiers to offer at the shrine of Kali, situated inside the fort.

As the siege prolonged without any success, Hyder proposed that if the Nayaka will pay thirteen lakh pagodas and promised his allegiance to him, he would forgive the latter's past conduct.

Receiving no assurance from the Marathas, the Nayaka decided to make peace with Hyder and promised to pay the amount. He paid five lakhs and for the rest agreed to sent his brother Parashuramappa as hostage.

At this time the Nayaka heard the news of the approach of the Marathas from Pune for attacking Hyder. Hyder summoned the Nayaka to join Mysore, who promised his support but evaded assistance.

While Hyder was engaged with the Marathas, the Nayaka plundered Mysore territories of Channagiri, Basavapattana, Santhebidanur and other places. Hyder dispatched his son Tipu against him, whereupon the Nayaka returned back to Chitradurga. Tipu closely followed him and renewed the siege of the fort, who was later joined by Hyder after defeating the Marathas.

By this time, many of the Nayaka's followers and relatives were either killed or wounded. In one of the sallies, even Madakari Nayaka and his brother Parashuramappa were wounded by a bullet shot.

When the fort was about to surrender in early 1779, two detachments of Maratha forces advanced to provide relief to the Nayaka. Hyder's forces successfully routed them. 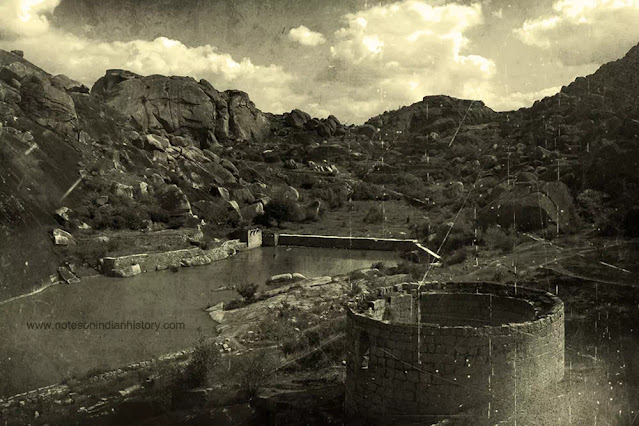 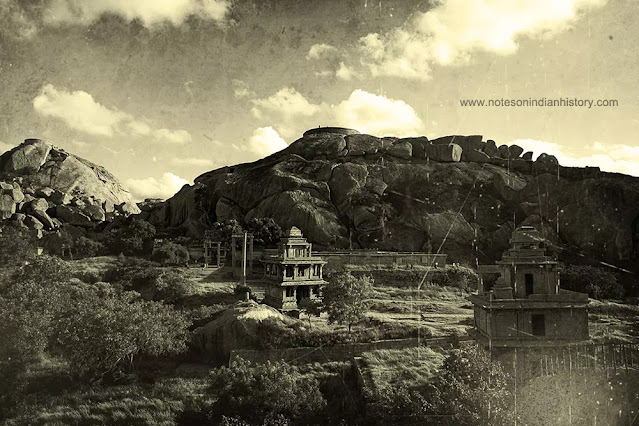 Chitradurga was finally captured by Hyder in March 1779. According to Rama Rao, 'The Musalman Jemadar of Chitradurga and other people in the chief's service who were disaffected towards him were bribed and on the plea of taking part in the Muharram festival the Musalman Jemadar came out and joined Hyder along with his followers'.

After the fall of Srirangapatna in May 1799, Chitradurga remained a province of Mysore under the Wodeyars.

The Chitradurga Nayakas are an integral part of Karnataka's folklore. An example is the tale of Onake Obavva, wife of a gate keeper of the fort.

As Hyder's soldiers were unable to penetrate into the strong fort, some of them were engaged in searching for secret passages. A soldier observed a woman carrying curds into the fortress, passing through a small crevice in the wall and one of the secret entrances was thus found out. It was a very narrow crevice, hardly a human being in a kneeling position could pass. At this time Obavva was serving afternoon meal to her husband who had to keep watch on that secret entrance. While collecting water from the well, which was nearby this secret passage, she heard some noise and perceived the enemy's action. She ran into her house and took with her a pounding pestle (onake). Keeping the pestle raised, she stood right next to the hole. As the enemy's head appeared through the hole, she hit it with the heavy pestle. In this way she killed a large number of Hyder's soldiers. When her husband returned he was dumbfounded to see what his wife had achieved. He immediately blew his horn and the garrison of Madakari Nayaka chased off the enemy.

According to Srikantaya, this incident happened in the night. 'Mysore State Gazetteers: Chitradurga District' states that she even dragged their dead bodies through the hole and pushed it aside.

After hearing the whole story Madakari Nayaka offered her rich presents which Obavva humbly refused saying, "My Lord, these implacable enemies are depriving us of our country and our homes and I, through God's grace and through the strength of the salt we have eaten of Your Highness, was able to prevent them from entering the fort clandestinely. For this slight service I do not deserve presents more than what Your Highness has already conferred on us".

It is hard to believe that Obavva's husband was the only man to guard that secret spot, and that there was no one else in that whole area, especially, while the siege was in progress. Had he been a sincere sentinel he would have never gone to eat, without placing another guard as his substitute at this dangerous situation. And of course if a human being was hit on the head with a pestle, he will definitely scream, which will alert the other soldiers. The biggest joke is that each soldier was dispatched with a single blow on the head with the pestle, and none of them resisted. Perhaps it was because the rival was Hyder Ali that such a story was formed and circulated. Moreover, in the imagination of some modern writers, this character was killed by Hyder's soldiers during her pestle-fight. Anyway, the hole through which Hyder's soldiers were said to have 'sneaked' is now known as Onake Obavvana Kindi or Pestle Gate.

Encyclopaedia of the Folk Culture of Karnataka: Introductory articles