The Bahmani Sultanate: Emergence and Decline

Posted onOctober 20, 2013
"The death of an old man like me is indeed of little moment, but to your Majesty, it will be the loss of an empire, and the ruin of your character" 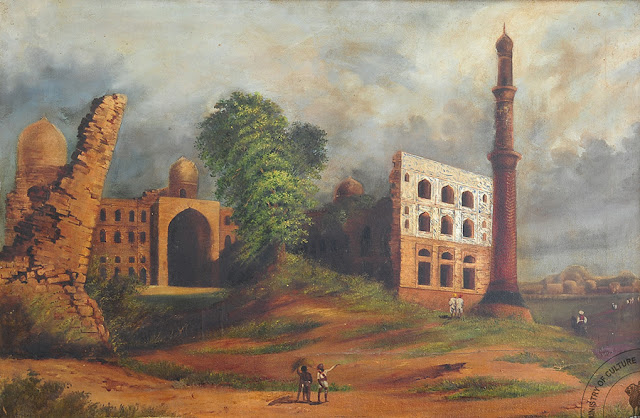 
The Bahmani Kingdom was founded by Alau'd-din Hasan Bahman Shah (1347-1358), a general who revolted against the repressive policies of Sultan Muhammad Tughlaq. Alau'd-din was the first Muslim ruler of the Deccan (South India) with his capital at Gulbarga (in Karnataka, India) in 1347. The Kingdom was situated on the northern Deccan region up to the river Krishna. The rulers of the Bahmani Kingdom were often at war with the neighboring Hindu Kingdom of Vijayanagara on the South.

Muhammad Shah (1358-1375) succeeded his father Alau'd-din Hasan Bahman Shah in 1358. He built two great mosques in Gulbarga, the Jama Masjid and Shah Bazar Masjid. He was followed by Alau'd-din Mujahid Shah (1375-1378), Daud Shah (1378), Mahmud Shah (1378-1397), Ghiyas-ud-din Shah (1397) and Shams-ud-din Daud Shah II (1397). Taju'd-din Firuz (1397-1422), also known as Firuz Shah of Bahmani, the next Sultan, was a learned man, who had the knowledge in religious and natural sciences. He defeated Devaraya I of Vijayanagar and married his daughter. Firuz was succeeded by his brother Ahmad Shah Wali (1422-1436) who was considered to be a saint because of his connection with the Sufi saint Hazrat Gesu Daraz. He shifted his capital from Gulbarga to Bidar. Alau'd-din Ahmad Shah (1436-1458) succeeded his father and he gave preference to Afaquis (foreigners who came from over-seas and had become the natives of Deccan) over the Deccanis. During his reign the quarrel between Deccanis and Afaquis began to grow and that weakened the Kingdom. He was followed by his eldest son Alau'd-din Humayun Shah (1458-1461) also known as Humayun, the Cruel.

Decline of the Bahmani Sultanate: Death of Mahmud Gawan (1481): 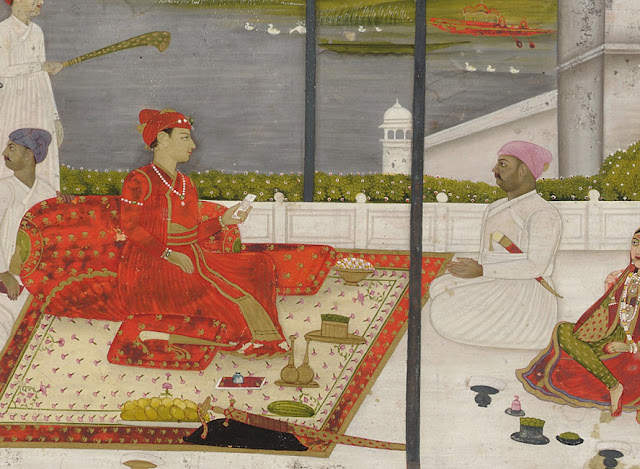 Khwaja Mahmud Gawan, the great Wazir of Bahmani Sultanate (1466-1481): Mahmud Gawan was a Persian merchant and he came to Bidar in 1453. Due to his honesty and simplicity, Alau'd-din Ahmad Shah offered him the post of a mansabdar in his court. During the reign of Humayun, Gawan was made his minister with the title of Malik't-tujjar. After Humayun's death, Gawan became the guardian of his eight-year old son, Nizam Shah (1461-1463). Muhammad Shah II (1463-1482), brother of Nizam Shah, made him the Prime Minister. Mahmud Gawan was a scholar and also a great administrator. The Sultanate reached the peak of its power during Gawan's ministry; the Kingdom extended from the Bay of Bengal in the East and the Arabian Sea in the West, including Goa and Kanchipuram. He built the famous Madrassa, the center of Islamic learning at Bidar in 1472, which attracted scholars from all over the world. Gawan improved the administration, organized finances, encouraged public education, reformed revenue system, disciplined army and removed corruption. By these excellent rules, the government acquired much strength, and justice was done to all; but on the other hand, gave offence to many ambitious chiefs, who entertained hatred to the minister. Muhammad Shah had once congratulated him, "the Almighty hath bountifully conferred upon me two incalculable blessings; a great kingdom, and such a servant as Mahmud Gawan!" the King then took off his upper robe, and put it on the shoulders of Mahmud, took his in return, and put it on his own person.

Envious of the king's favour shown towards the minister, a number of Deccanis and Abyssinians executed a plot against him; They obtained a blank sheet of paper with Gawan's seal affixed on it and wrote a letter inviting the king of Orissa to invade the Kingdom. When this letter was presented to the Sultan, Gawan was called to the court. The minister's friends warned him against going, and to wait till the King's temper became lessened; by that time the authors of the forgery might be detected, and brought to punishment. Gawan repeated the following verses in reply, "He who dies a martyr in the fullness of devotion has his reward here and hereafter; happy, then, would it be for me to meet with so enviable a destiny". Many of the chiefs sent messengers to him saying that they had heard alarming reports, and that if he chose to fly to Gujarat, they would attend him and sacrifice their lives for him. Gawan replied, he had for many years enjoyed an honourable station in his master's service, during which he had been guilty of no crime; that he relied with confidence on the justice of the King, who would certainly not punish a faithful servant on the bare accusations of his enemies; but if impelled by Providence to do so, it was befitting in him to submit to the decree. He also said that the measure they proposed out of duty and friendship, would on his part be ingratitude and rebellion.


Gawan went to the court. Muhammad Shah asked him, "When any one is disloyal to his sovereign, and his crime be proved, what should be his punishment?" The Khwaja replied, "Let the abandoned wretch who practices treason against his lord meet with no mercy". The King then showed him the letter; upon seeing which, the minister, after repeating the verse of the Koran, "O God, verily this is a great forgery", said, "The seal is mine, but not the letter, of which I have no knowledge". He concluded, by repeating the following verse: "By that God whose commands have been fulfilled by the just, even at the expense of their blood, false as the story of Yusuf and the wolf is that which my enemies have forged against me". Muhammad Shah, who was at that time intoxicated with wine, ordered his Abyssinian slave Jauhar to put the minister to death on the spot. Thus died the loyal minister, at the age of seventy eight.

Muhammad Shah, hearing reports of the vast wealth of his minister, sent for the treasurer, and demanded the money and jewels of the Khwaja. The treasurer said, "my master had two treasuries, one of which he called the King's, from which were issued the expenses of his troops, stables and household: in this there are now ten thousand larees and three thousand hoons; the other he called the treasury of the poor, and in this there is a sealed bag containing three hundred larees". The king wondered and again asked the treasurer, "how come it that the Khwaja, whose revenues equalled that of many kings, should only have so small a sum?". The treasurer replied, "Whenever money came from his jagir, having taken for the King's treasury the pay of his troops and stables, he gave the remainder, in your Majesty's name to the poor, not reserving a cowrie for his own use. A sum of forty thousand larees, which he brought with him from Persia to the Deccan, he employed in trade, and preserving always that capital, he expended two larees daily for his own kitchen and apparel out of the profit, the remainder of which was carried into the treasury for the poor, and issued from thence in sums remitted to his mother, his relatives, and worthy persons, with whom he had made acquaintance in his travels, and who would not come to Hindustan". The King then assembled all the late minister's servants and questioned them. He got replies that, the Khwaja always slept on a bare mat and the eating for him were always prepared in earthen pots. The King now became melancholy, and the treasurer took courage to say, "O King! may many thousands such as Mahmud Gawan be a sacrifice for your safety; but why do you not regard his claims and ascertain who was the bearer of the letter to the Ray of Orissa, that his treason might appear manifest to us and to all mankind". Muhammad Shah sent for the accusers of the minister to bring the bearer of the letter before him. None could be produced; and the real truth now flashed in the King's mind: he trembled with horror at the act that he had committed, and retired to his harem full of remorse and sorrow. Ferishta records that Muhammad Shah, a thousand times in an hour regretted the loss of Mahmud Gawan, till he died in 1482.


The death of Mahmud Gawan in 1481 marked the decline of the Bahmani Kingdom. Muhammad Shah was followed by his son Mahmud Shah II (1482-1518) and during his reign, five powerful governors declared their independence: Malik Ahmed (Nizam Shahis of Ahmadnagar -1490), Fathullah Imad Shah (Imad Shahis of Berar -1490), Yusuf Adil Shah (Adil Shahis of Bijapur -1490) and Quli Qutub Shah (Qutub Shahis of Golconda -1518). Qasim Barid (1492-1505) became the de facto ruler of the Bahmani Sultanate (Barid Shahis of Bidar -1492). In 1504, his son Amir Barid (1504-1542) succeeded him. The last of the Bahmani Sultans: Ahmad Shah II (1518-1520), Ala-ud-din Shah (1520-1523) and Wali-ullah Shah (1523-1526) were mere puppets in the hands of Amir Barid. Kalim-ul-Lah Shah (1526-1528), brother of Wali-ullah, was the last Sultan of the Bahmani Kingdom. Upon hearing Babur's conquest of Delhi, he wrote to Babur offering him Berar and Daulatabad, if he would help him from the yoke of Amir Barid. The news however, leaked out and he fled to Bijapur, but later retired to Ahmadnagar, where he resided till his death. Thus ended the Bahmani Sultanate!

The History of the Rise of Mahommedan Power in India By Ferishta, trans. by John Briggs
Share
1 comment
Labels#Bahmani/Deccan Sultans
Newer
Older