Posted onJune 16, 2014
Hemu was a native of Rewari, belonged to the Dhusar caste (a sub-class of the the Banyas). [Banyas means shopkeeper or trader] Abul Fazl states that Dhusar was the lowest class of hucksters in India. Badauni calls him greengrocer. Hemu's father was Puran Das, a religious man. Hemu's early life was full of hardships and difficulties. When Hemu was in his teens, his father left his home and went to Mathura. So in order to support his family Hemu left his studies and started huckestry. For some time, he sold saltpeter [one of the chief components of gunpowder] in the streets of Rewari.

When his position improved, he became a weighman in the bazaar at Delhi, where he supplied cereals and saltpeter to Sher Shah's army.

Hemu was very ambitious, intelligent and hard working man. He sought a government job and became a government huckster. From this place his rise to prominence took place.


Somehow he came to the notice of Sher Shah's son and successor Salim Shah Suri, who made him Superintendent of the Markets [Shahana-i-Bazar]. Subsequently he was promoted to the rank of Superintendent of Intelligence and Posts [Daroga-i-Dak-Chauki]. 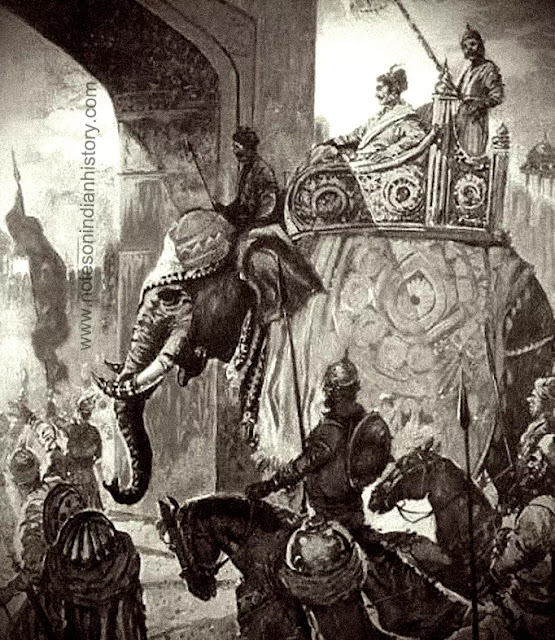 Soon after Adali's accession, rebellions arose on all sides. It was the Karranians who revolted first. After Taj Khan Karrani fled from the council Adali sent an army under Hemu to pursue him. Hemu defeated Taj Khan at Chhibramau. He fled towards Chunar and joined his brothers, Imad, Sulaiman Khan and Khwaja Ilyas and raised a rebellion. Hemu gave a complete defeat to the Karranians, and Chunar was recaptured.

After this victory, when Hemu returned glorious and triumphant to Adali, he bestowed upon him the title of Raja Bikramajit and also the viziership of the kingdom. "From that period, the whole management of the State devolved upon him, and so entirely did he assume the mastery, that no public order emanated from Adali, who, however, remained free to regulate his own bread and water, and retained still the treasury and elephants in his own charge", says Abdullah.

When Adali heard of Ibrahim's arrival at Kalpi, he sent Hemu towards that direction. At Kalpi, Hemu attacked Ibrahim and achieved a great victory. Ibrahim fled to his father at Bayana. Hemu pursued him and closely invested the fort of Bayana for three months.

It is now time to learn a brief history of Delhi: Prithviraj Chauhan (r: 1179-1192) was the ruler of Delhi just before the Muslim invasion. Prithviraj was defeated in the Second Battle of Tarain in 1192 by Muhammad Ghori and Delhi Sultanate (1206-1526) was established. Zahir ud-din Muhammad Babur, a descendant of Timur, defeated the last Delhi Sultan Ibrahim Lodi in the 1st Battle of Panipat in 1526 and laid the foundations of the Mughal empire. Mughal Rule was interrupted briefly; when Sher Shah Suri, an Afghan, defeated Babur's son Humayun and established the Second Afghan empire in India, known as the Sur Dynasty (1540-1555). Humayun took refugee in Persia (Iran) with Shah Tahmasp.

Taking advantage of the civil war among the Suris, Humayun marched towards India to regain his throne. After defeating Sikandar Suri, he became the king of India the second time in July 1555, after a gap of 15 years.

Meanwhile, Muhammad Shah, governor of Bengal, raised the standard of rebellion and marched to conquer Jaunpur, Kalpi and Agra. Hemu was ordered to raise the siege of Bayana and return to Adali. On the way Hemu engaged Muhammad Shah Suri at Chhapparghatta in December 1555, and killed him.

Humayun's rule, however, did not last long; he died on 24 January 1556, due to an accidental fall from the stairs of his library (Sher Mandal library at Purana Qila) at Delhi.


At the time of Humayun's death, his son Akbar was away in Punjab with his guardian Bairam Khan, where he was engaged in operations against Sikandar Suri. Akbar (r: 1556-1605) was coronated in Kalanur in Punjab, on 14 February 1556, at the age of thirteen. Bairam Khan became his regent.

Upon hearing the news of Humayun's death, Adali sent Hemu with a large force to capture Delhi and Agra. When Hemu arrived Agra the Mughal generals, Sikandar Khan Uzbek abandoned the place and fled to Delhi. After occupying Agra, Hemu proceeded towards Delhi. Tardi Beg Khan, the governor of Delhi, was defeated after a day's battle and Hemu successfully took possession of Delhi.

With the possession of Delhi Hemu became the defacto ruler of Sur empire. Ahmad Yadgar states that on 7th October, 1556, Hemu ascended the throne of Delhi, assuming the title of Raja Vikramaditya. However, no coin struck by Hemu is known.

Hemu then sent a letter to Adali, "Your slave, by the royal fortune, has routed the Mughal army, which was firm as an iron wall; but I hear that Humayun's son commands a numerous force, and is advancing against Delhi. For this reason I have kept the horses and elephants of the Mughals, in order that I may be able to face the valiant enemy, and not allow them to reach Delhi".

After a stay of few days at Delhi, Hemu marched against Akbar, who was on his way to Delhi accompanied by Bairam Khan.

Hemu had fought twenty two battles against the opponents of Adil Shah and was victorious in all of them. He had a large army with 1,500 war elephants which no ruler of India had at that time.

Hearing the victorious tales of Hemu and the strength of his troops, Bairam Khan was advised by his counselors to retreat to Kabul, but he insisted on fighting Hemu. After giving the soldiers inspiring advices and promises of future favour, Bairam Khan sent them towards Delhi and himself followed with the young Akbar.


The Second Battle of Panipat was fought between the Afghans and Mughals [Adali & Akbar] on 5 November 1556.

Hemu was sitting in the howdah on his elephant 'Hawai'. Initially his forces were winning, but fate had decided otherwise.

It happened that an arrow struck Hemu in the eye, and passed through the back of his head. With pain he sunk into the howda. Seeing their master in that condition, his men stopped fighting and dispersed.

According to Ferishta, "Raising himself again, Hemu drew the arrow and with it the eye out of the socket, which he wrapped in his handkerchief, and in spite of his painful situation, he continued to fight with unabated courage, endeavouring, with the few men who remained about his person, to force his retreat through the enemy's line".

At last, he fainted and fell down into the howda.

Just then, Shah Quli Khan Mahrum came up to the elephant on which Hemu was riding, and attacked the driver. He did not know that Hemu was on the elephant. The helpless driver, from fear of his life, pointed to his master.

Hemu was taken captive and brought before Akbar, where he was beheaded.

But who killed him? It is a controversial matter.

His head was sent to Kabul and hung up on the iron gate, while his body was hanged on the Delhi gate. After Hemu's death, his followers were pursued and put to death. On his refusal to convert to Islam, Hemu's father was mercilessly executed.

"It reflects great credit upon Hemu that the Afghan ruler Adil Shah relied upon a Hindu officer in preference to the great chiefs of his own tribe, and that Hemu proved equal to the task imposed upon him" quotes R. C. Majumdar. "Hemu's defeat in the second battle of Panipat was a mere accident of war...No Hindu had ever been covered with so many glorious wounds on the field of battle except Maharana Sanga; no Rajput wielded the sword so bravely against foreign invaders as this humble Hindu of Rewari did on the field of Panipat", says K.R. Qanungo.

The second battle of Panipat resulted in the re-establishment of Mughal rule under Jalal-ud-din Muhammad Akbar.

What would have happened if Hemu had won the Panipat battle? Would he have declared his independence? or placed his master Adil Shah on the Delhi throne?

In his war against Humayun and Adil Shah's opponents, Hemu contracted large loans from the Nalapuria banking firm of Rewari.