Posted onDecember 14, 2014
You may know how fortune favoured Mihr-un-nissa, the widow of Sher Afgan to become the virtual ruler of the Mughal Empire during Jahangir's reign. You can read an outline of the story Here. With the exception of khutba (prayer for the reigning monarch), she possessed all privileges of a monarch. In a way Nur Jahan can be compared with Raziyya Sultan of Delhi. Raziyya was the first female monarch of Hindustan, but Nur Jahan gain power only after her marriage with Jahangir.

Also Read: Was Jahangir Responsible for the Murder of Sher Afgan?

Nur Jahan, a Symbol of Beauty and Wisdom:


Mihr-un-nissa titled Nur Jahan was born in Kandahar to Mirza Ghias Beg and his wife Asmat Begum on 31st May 1577. After the death of his father, Ghias Beg along with his family came to India and joined Akbar's service. Nur Jahan was married to Sher Afgan during Akbar's reign. Jahangir gave the title of Itimad-ud-daula to Ghias Beg in 1605.

The Last Wife: Jahangir was the second husband of Nur Jahan. When Jahangir marries her in 1611, she was in the thirty-four years of her age and also had a daughter. She had no children by Jahangir. According to historical records it is impossible to describe the beauty and wisdom of the queen. She had arranged marriages of many orphan girls and also gave them a wedding portion. She also had great problem solving skills. She was liberal to all who begged her support. She designed beautiful gowns, veils and ornaments and also possessed much skills in adorning apartments and arranging feasts and entertainments. She was also a poetess. She accompanied Jahangir in hunting expeditions; and once she killed a tiger with the first shot, which Mirza Rustam, Jahangir's huntsman couldn't do. Another time "she shot two tigers with one shot each and knocked over the two others with four shots. In the twinkling of an eye she deprived of life the bodies of these four tigers. As a reward for this good shooting I gave her a pair of bracelets of diamonds worth 100,000 rupees and scattered 1,000 ashrafis over her", Jahangir's words. 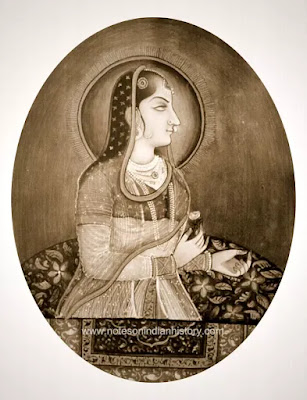 Being a loving wife, she cared her husband very much. Thats why Jahangir gave her the title of Nur Jahan in accordance with his name Nur-ud-din Jahangir, "I did not think anyone was fonder of me than Nur Jahan Begum". As we know, Jahangir was addicted to wine and in 1621, he fell seriously ill. "Nur Jahan Begum, whose sense and experience exceeded that of the physicians, in her kindness and devotion, exerted herself to reduce the quantity of my potations. Although I had before discarded the doctors and their advice, I now had faith in her attention. She gradually reduced the quantity of wine I took, and guarded me against unsuitable food and improper things". Francisco Pelsaert gives the following description in his 'Jahangir's India', "when the last cup has been drunk, the King goes to bed. As soon as all the men have left, the Queen comes with the female slaves, and they undress him, chafing and fondling him as if he were a little child. This is the time when his wife, who knows so well how to manage him that she obtains whatever she asks for or desires, gets always 'yes,' and hardly ever 'no' in reply". Once Nur Jahan fell ill and she soon recovered with the help of the physician Hakim. For this service, Jahangir bestowed on the physician three villages and rewarded him a good amount of silver as much as his weight.

Conflict between Nur Jahan and Shah Jahan: Nur Jahan married her daughter Ladli Begum to Jahangir's youngest son Shahryar and wanted him to succeed his father. Thus she came into conflict with Prince Shah Jahan. This was followed by an unsuccessful rebellion of Shah Jahan.

Mahabat Khan's Revolt (1626): Nur Jahan and her brother Asaf Khan were worried about the rising power of Mahabat Khan (Zamana Beg) and Prince Parveiz, who successfully suppressed Shah Jahan's revolt. As an attempt to part them Mahabat Khan was appointed as the governor of Bengal. Since Mahabat Khan didn't pay up the revenue arrears, he was summoned to the court. Asaf Khan's object was to bring him to disgrace and deprive him of honour. Mahabat Khan had married his daughter to Barkhurdar without getting permission from the Emperor. As a result, Barkhurdar was sent to prison and all the treasures which was given to him were seized. This resulted in the revolt of Mahabat Khan in 1626.


Jahangir was on his way to Kabul and was encamped on the banks of the River Behat (also known as Jhelum) while Asaf Khan along with the army had crossed the bridge and moved to the other side of the river. Mahabat Khan arrived at Jahangir's camp with about 5000 Rajput soldiers and made him a prisoner and told him that, "Fearing that through the vindictiveness and malice of Asaf Khan, I should be disgraced, tortured and killed, I have dared to take this daring step of personally throwing myself on the Imperial protection. Sire, if I deserve to be killed and punished, kill and punish me in your Imperial presence". He then asked Jahangir to mount an elephant and go out for hunting. In the meantime Nur Jahan thinking that Jahangir had gone out for hunting, crossed the river to visit her brother.

Nur Jahan Saves Jahangir: Nur Jahan exhibited great resourcefulness and bravery in rescuing her husband from Mahabat Khan's hands. When she learned that Jahangir was under the custody of Mahabat Khan, she thought means to free him. Nur Jahan along with some men passed the river by a ford. Nur Jahan had in her litter the daughter of Shahryar and the elephant on which she was riding received two sword-cuts on the trunk.  After crossing the river, she joined Jahangir. As she suggested, Jahangir showed Mahabat Khan great favor and won over him to his side by telling him that Nur Jahan had some plots against him. As a result, the guard of Rajputs was diminished. Meanwhile Prince Parvez died at Burhanpur due to alcoholism in Oct 1626. Mahabat Khan was pardoned and sent to Thatta, where he joined hands with Shah Jahan.

Death of Jahangir and Events Thereafter: 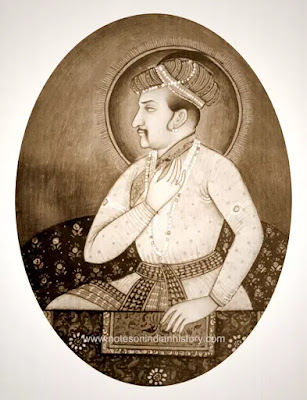 Jahangir died on October 28, 1627 at Kashmir on his way to Lahore at the age of 58 years. At that time Shahryar was at Lahore. When Nur Jahan's secret letter informed him of Jahangir's death, he declared himself as emperor  and captured the royal treasury.

Dawar Bakhsh (1627): When Jahangir died, Shah Jahan was away in the Deccan. Asaf Khan betrayed his sister and sided with his son-in-law Shah Jahan to ascend the throne. In order to secure the accession of Shah Jahan, Asaf Khan brought Bulaqi, son of Khusrau, out of confinement and declared him the emperor under the title of Dawar Bakhsh (God Given) and sent a messenger to Shah Jahan informing him of Jahangir's death. Asaf Khan also got possession of his grandsons Princes Dara Shukoh and Aurangzeb who were in the female apartments with Nur Jahan. Dawar Bakhsh along with Asaf Khan's army defeated Shahryar's forces and Shahryar was blinded and imprisoned.

Shah Jahan Ascends the Throne (1627-1658): On 30 December 1627, Shah Jahan ascended the throne at Lahore by general consent, and on his orders, Dawar's brother Garshasp, Shahryar, and Tahmuras and Hoshang, sons of the late Prince Daniyal, were all put to death by Asaf Khan. It is said that Asaf Khan allowed Dawar Bakshsh to escape to Persia. Mahabat Khan was appointed as governor of Ajmer and was granted the title of Khan-i-Khanan Sipasalar. 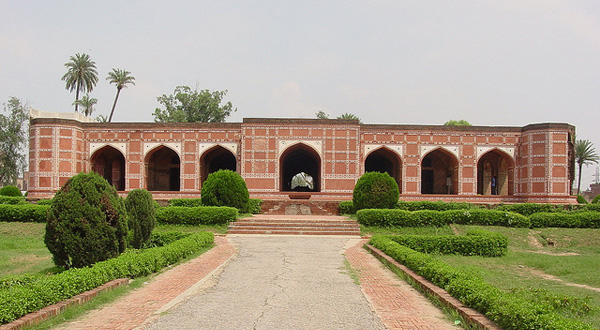 What Happened to Nur Jahan: Nur Jahan's influence ceased with the death of Jahangir and the imprisonment of Shahryar. Shah Jahan, upon his accession to the throne, allowed her a pension of two lacs per annum. After Jahangir's death, she wore only white clothes, abstained from all entertainments and lived in sorrow at her palace in Lahore. She died at Lahore at the age of 72, in 1645, and lies buried in a tomb at Shahdara Bagh in Lahore, close to that of her husband.


Nur Jahan built a beautiful tomb for her father Itimad-ud-daula in Agra, which is the first Mughal structure to be built of white marbles. Built on the banks of River Yamuna (Agra, Uttar Pradesh, India), the tomb of Itimad-ud-daulah resembles a silver jewel box in the midst of a garden. It is believed that this building had inspired Shah Jahan to build the magnificent Taj Mahal. Nur Jahan also built Nur Mahal Sarai at Punjab, Nur Afshan garden at Agra, Shahdara Bagh at Lahore and her own tomb at Shahdara Bagh.

Itimad-ud-daula was the Wazir of Jahangir. He died in January 1622. After his death Asaf Khan was made the Wazir in 1626.

While in prison Shah Jahan wrote a letter to Mahabat Khan II (After Mahabat Khan's death his son got the same title) seeking his assistance, where he remarks about Mahabat Khan's rebellion, "When the Khorasaunees (Nur Jahan) had surrounded my father Jahangir, and deprived him of power; from what distance, and with what rapidity, did not Mahabat Khan hasten to relieve him from the hands of his infernal enemies! Having kept him some time under his own control he gave him renovated power on the throne of empire, and rescued me from the cell of wretchedness and path of trouble, after my father’s death, conducting me to the capital".
Share
Post a Comment
Labels#Mughal
Newer
Older