Who Sent a Rakhi to Humayun Seeking His Help

Posted onNovember 20, 2015
Raksha Bandhan is one of the important Hindu festivals in India that celebrates the bonding between brothers and sisters, even if they are not biologically related. Sisters tie the sacred thread called Rakhi on their brothers wrists to strengthen their bond of love. Rajput queens practiced the custom of sending Rakhis to neighboring rulers as token of brotherhood, especially on the occasions of danger. 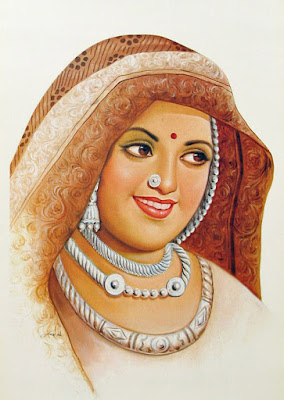 Rani Karmavati was the widow of Maharana Sangram Singh (better known as Rana Sanga) of Mewar. Bikramjit and Udai were her sons. After the death of Rana Sanga, his eldest son Ratan Singh II (1528-1531) succeeded him. Rana Ratan Singh died in 1531 and was succeeded by his brother Bikramjit (1531-1535).

Bahadur Shah was the Sultan of Gujarat from 1526 to 1537. His long time wish was to capture Chittor in revenge for what Rana Sanga had done at Ahmadnagar, that he slew so many Muslims and carried away their women captive.

Background: Prince Bahadur Khan was the second son of Sultan Muzaffar Shah II of Gujarat (1511-1526). When his brother Prince Sikandar tried to assassin him, Bahadur went away at first to Dungarpur and then to Rana Sanga of Chittor. This happened around the year 1525. The Rana welcomed him with great kindness and gave him every attention. Queen Jawahir Bai (Rana Sanga's chief wife) used to call Bahadur her 'son'. One day the Rana's nephew invited Bahadur to an entertainment at his house. Among the dancing girls was one of singular beauty, who danced exquisitely. The Rana's nephew said, "She was the daughter of the Kazi of Ahmadnagar and when the Rana sacked Ahmadnagar I went to the Kazi's house, killed him, and carried off this girl; the rest of his women and girls were carried off by the other Rajputs" Before he had finished speaking, Bahadur drew his sword and cut him into two. The Rajputs immediately crowded round to kill him. Then the queen Jawahir Bai rushed in with a drawn dagger and declared that she would rip herself up if anyone killed Bahadur. When the Rana heard the facts, he said that his nephew had only be entreated as he deserved for uttering such language to a prince of Gujarat, and he forbade anyone to injure Bahadur. The Rana added that if Bahadur had not killed his nephew he should have done so himself. Shortly afterwards Bahadur, finding that he was looked upon somewhat coldly in Chittor, left the place and went to Sultan Ibrahim Lodi of Delhi. Later events are not related to this topic and let us now return to Bahadur Shah's proceedings in Chittor.

First Attack on Chittor (1532-33): Silhadi Purbiah was a Rajput who was holding the possession of Bhilsa, Raisin and Ujjain. Hearing that Silhadi was keeping a large number of Muslim women in his harem, Bahadur marched against him and forced him to embrace Islam. Bhupat, Silhadi's son, fled to Bikramjit of Chittor for protection. Raisin fell into Bahadur's hands in May 1532. His heart was embittered against Chittor because Bikramjit had sent a force in aid of Silhadi, and had thus caused much trouble and delay in the taking of the Raisin fort. Bahadur now marched to Chittor and invested it for nearly three months. Queen Jawahir Bai wrote an impressive letter to him offering the golden waistband and jeweled crown (which had been captured from Mahmud Khilji of Malwa when Rana Sanga defeated him) and also agreed to pay five lacs of rupees, one hundred horses, and ten elephants. Bahadur Shah accepted it and thereafter he abandoned the siege (Mar 1533) and returned to Gujarat.


Humayun and Bahadur Shah: Humayun, the son of Babur, was the second Mughal Emperor. Bahadur had already given offence to Humayun by giving shelter to his rebel cousin Muhammad Zaman Mirza. As a result of this, Humayun advanced from Agra and declared war on him. At that time Bahadur was engaged in the siege of Chittor for the first time. At the time of attack Rani Karmavati sent an envoy to Humayun with a Rakhi seeking his help, considering him as brother. Humayun advanced from Agra towards Chittor. According to Ferishta, Humayun advanced as far as Gwalior, encamped there for two months, and, for what reason does not appear, returned peaceably to Agra. Bikramjit, despairing of relief, sent a crown of jewels and other valuable presents to Bahadur Shah, and thus induced him to raise the siege. 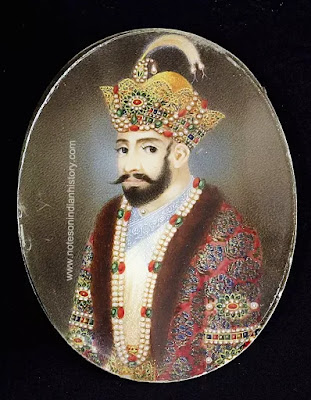 Second Sack of Chittorgarh and Death of Rani Karmavati (March 1535): Bahadur's second attack on Chittor was in the year 1534. While engaged in the siege of Chittor, Bahadur sent Tartar Khan Lodi, grandson of the late Sultan Sikandar Lodi, to attack Delhi. Tartar Khan took Bayana and advanced towards Agra. Humayun sent his brother Hindal to oppose him and the Gujarati army was totally defeated. Meanwhile in Chittor, Rani Karmavati sent Bikramjit and Udai (father of Maharana Pratap) to Bundi and entrusted the sole charge of defense to Bagh Singh. Humayun now advanced from Agra and declared war on Bahadur. On hearing of Humayun's advancement, Bahadur wrote to him, saying that as he was employed against an infidel he expected that the Mohammedan king would not oblige him to raise the siege by invading his country. When Humayun received this news, he halted at Sarangpur in Malwa. Bahadur sacked Chittor and the Rajputs committed the heroic death. Before the capture of the fort, the Rani along with other women committed Jauhar. Soon after the fall of Chittor, Bahadur proceeded against the Mughals after leaving Chittor under the command of Banbani.

There are many answer-less questions regarding this topic:

Babur's Memoirs: Babur mentions her in his Memoirs: he calls her Padmavati. "On Tuesday, messengers arrived from Bikramajit, who, with his mother Padmavati, was in Rantambhor. A person had come from a Hindu named Asok, who was high in Bikramajit's confidence, with offers of submission and allegiance, expressing a hope that he would be allowed seventy lacs as an annuity. When Rana Sanga defeated Sultan Mahmud and made him prisoner, the Sultan had on a splendid crown-cap and golden girdle, which fell into the hands of the Pagan, who, when he set Sultan Mahmud at liberty, retained them. They were now with Bikramajit. By the persons who came from him to wait on me, he now sent me this crown and golden girdle, and asked Bayana in exchange for Ranthambhor". He further adds that "Shamsabad was fixed on as the equivalent for Rantambhor". This happened in the year 1528. If that was the case then how come the queen Jawahir Bai offered the same golden waistband and jeweled crown to Bahadur Shah in the year 1533?

According to Bayley, it was Rana Sanga's mother who had saved Bahadur Shah's life when he was a refugee at Chittor. If that was the case then at the time of Bahadur's second attack that lady might have died. But her letter to Bahadur Shah goes like this, "My son has long served the Sultan. He went from this place to Gujarat, and paid his respects to the Sultan; I, therefore, as an aged woman, humbly beg that the Sultan will forgive his faults, and, as my life is bound up in his, by granting his life the Sultan will also renew mine, and confer on him an incalculable boon. Henceforth he will be faithful and devoted in service; he will not be disobedient in any matter, and will faithfully and energetically do his duty wherever he may be ordered. Several towns of the territory of Mandu have been in his possession since the time of Sultan Mahmud Khilji those he offers to surrender. The golden girdle and the jewelled crown and cap which belonged to Sultan Mahmud, the value of which jewellers are unable to estimate, these which were won on the day of the victory over that Sultan, and one hundred lakhs of tankahs, and a hundred horses with gold-worked bridles, and ten elephants, he presents as tribute to your Majesty."

History of the Rise of Mahommedan Power in India By Ferishta

The History of India, as Told by Its Own Historians: The Local Muhammadan Dynasties: Gujarat By Bayley, Edward Clive
Share
2 comments
Labels#Mughal
Newer
Older