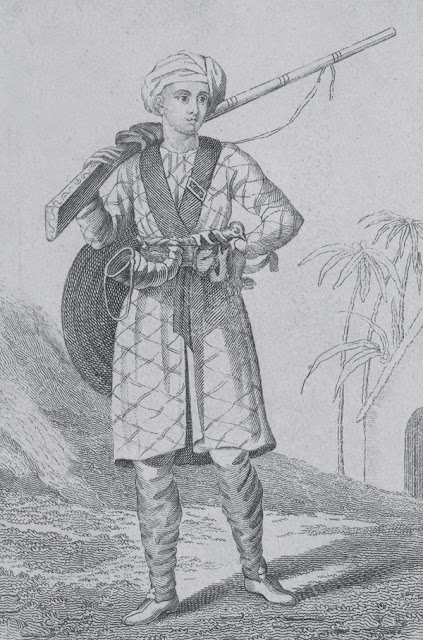 Hyder Ali was born in 1721 at Budikote, Kolar (in Karnataka), which was the Jagir of his father Fath Muhammad, who was then a commander in the service of Nawab Abdul Rasool Khan of Sira. After the death of Fath Muhammad, Abbas Quli Khan, son of Abdul Rasul Khan, tortured and imprisoned Hyder and his elder brother Shahbaz. The widow of Fath Muhammad seek protection of her brother Ibrahim Sahib at Bangalore, who was employed in the service of the Raja of Mysore. Ibrahim Sahib obtained the release of the children and gave shelter to them. When Shahbaz had attained a sufficient age, his uncle took him to Nanjaraj, minister of Maharaja Krishnaraja Wodeyar (1734-1766), and Shahbaz was appointed as a commander in the Mysore army. Hyder Ali assisted his brother during the siege of Devanahalli in 1749 and it was during this siege that Hyder Ali attracted the attention of minister Karachuri Nanjarajaiya. "In the siege of Devanahalli, he began to pay attention to the profession of arms, first appearing as a volunteer horseman in his brother's corps, and afterwards occasionally entrusted with the command of parties of infantry in the trenches. This bungling and unskillful siege, directed by a man who had neither seen nor studied the profession of arms, and possessed no quality of a soldier but headlong courage, was protracted for nine months, when the Poligar consented to evacuate the place on the condition of being permitted to retire unmolested with his family". At the siege of Trichinopoly (or Trichy now known as Tiruchirappalli) (1751-1752), Hyder learned the basics of European warfare. For his distinguished service in the Second Carnatic War (1749-1754), Hyder was appointed the Faujdar of Dindigul (1755). At Dindigul, Hyder established a powerful arsenal, artillery and laboratory with help of the French. Furthermore, he consolidated his position by subduing the neighboring Poligars and collecting large booty. Khande Rao, a Brahman, was Hyder's chief accountant.


Nanjaraj had spent over 3 crores of rupees in futile attempts to capture Trichinopoly. Offended by this, Krishnaraja and some of his faithful attendants made plans to imprison Nanjaraj. On receipt of this intelligence, Nanjaraj and his brother Devaraj made plans to take life of the Raja. Nanjaraj forcefully entered the palace, replaced the Raja's attendants with his own and put the Raja under house arrest. Devaraj, who had protested against this outrageous proceeding, was so deeply offended at this open contempt of his admonitions that he determined to renounce all future intercourse with his brother. He left Srirangapatna with his family to Sathyamangala. In March 1757, Mysore was attacked by the Marathas under Peshwa Balaji Baji Rao, Nanjaraj agreed to pay 32 lacs of rupees. But he could pay only 5 lacs at that time, and 14 districts were pledged to the Marathas. The Marathas left Mysore after leaving their agents for collecting the revenues from the pledged districts.

Due to the reasons which have been related above, the Mysore troops had fallen into a long arrears of pay. The troops placed Nanjaraj in Dharna demanding their arrears of pay. Nanjaraj requested Hyder's help to handle this situation. Hyder effected a reconciliation between the Dalavai brothers. By the orders of his brother, Nanjaraj made his apologies to the Raja and he was pardoned. Dalavai Devarajaiya came to Srirangapatna, where he passed away in Jun 1758. The troops were still demanding their arrears of pay. Hyder put down the mutiny by plundering the properties of the most wealthy ringleaders. During that time, Hyder Ali got Bangalore as a Jagir from Krishnaraja.

Nawab Hyder Ali Khan Bahadur: In 1759, the Marathas under Gopal Hari laid siege to the Bangalore fort demanding payments. The Mysore troops refused to march against them without the payment of their arrears. Hyder offered his personal responsibility for any arrears due to the men, of which he knew there was little; but the offer increased his popularity, and he was appointed the commander in chief of the army. The Marathas were defeated and they entered a negotiation with Hyder. The Marathas agreed to withdraw their troops from the pledged districts on the condition that 32 lacs of rupees should be paid immediately by Mysore. Half of the amount was immediately paid by Hyder. "Such was Hyder's influence and credit that he was enabled to make an arrangement with the bankers of the enemy's camp; by which, on taking his personal security, they rendered themselves responsible for the remainder, on an understanding between all the parties interested in the transaction that Hyder was to have the direct management of the pledged districts, as the fund from which that remainder was to be liquidated". Hyder accordingly appointed his own officers to these districts. As the Marathas vacated, Krishnaraja honored Hyder by bestowing upon him the title of Nawab Hyder Ali Khan Bahadur.


Deposition of Nanjarajaiya (1759): It became necessary for Krishnaraja Wodeyar to overthrow Nanjaraja, as he was then a virtual prisoner in the palace. Khande Rao and the queen mother Maharani Devaja Ammani Avaru sought Hyder's help to oust Nanjaraja. The settlement of the arrears of the troops was made the reason for compelling Nanjaraj to retire from public life. According to the instructions of Khande Rao, some chiefs of the troops insisted on Hyder to lead them to sit in Dharna at the gate of Nanjaraj. Thus Nanjaraj was compelled to retire and the Raja assumed the full control of the state affairs. For the purpose of enabling Hyder to discharge the arrears; and provide the regular pay of the troops in future, an addition was made to his assignments of revenue, which caused the districts in his possession to exceed one half of the Raja's whole territory. Nanjaraj left Srirangapatna with his family and adherents but refused to leave Mysore. By the orders of the Raja, Hyder laid siege to Mysore and Nanjaraj was compelled to retire with his family and troops to his Jagir at Konanur. Thus came to an end the Dalavai regime in Mysore. After the deposition of Nanjarajaiya, Khande Rao was appointed as the minister of the state.

Conspiracy against Hyder Ali (1760): Hyder was now actually possessing more than one half of the dominions of the state. When Hyder demanded the compensation for the expenses incurred in the siege of Mysore he was granted four more districts, though opposed by Khande Rao. This was the beginning of the enmity between Hyder and Khande Rao. Meanwhile, after their defeat in the third Carnatic War at Wandiwash on 22 Jan, 1760 by the English, the French were left with Jinji, Pondicherry and Karaikal. At this juncture, the French concluded a treaty with Hyder for the defense of Pondicherry. Hyder sent a detachment under his brother-in-law Mukhdoom Ali to Pondicherry for the French aid. During this march, Mukhdoom Ali captured Anekal and Baramahal.

Maharani Devaja Ammani realized that the removal of Nanjaraj had only substituted another more dangerous usurper. She hatched a conspiracy with Krishnaraja and Khande Rao to depose Hyder. For this, they made negotiations with the Marathas. At that time most of Hyder's troops had gone with Mukhdoom Ali to Pondicherry. Visaji Pandit immediately dispatched his general with a large force to Mysore. Hyder was surprised on this unexpected attack but was more astonished to see the treachery of his servant Khande Rao. Hyder had to flee from Srirangapatna to Bangalore leaving his whole family behind him. Khande Rao kept Hyder's family in honourable confinement (Tipu was in his ninth year) and sent a huge army to Bangalore in cooperation with the Marathas. Hyder recalled his troops from Pondicherry, however they couldn't help him. To Hyder's surpise, the Marathas in Bangalore agreed to retreat on the cession of Baramahal (now Krishnagiri in Tamil Nadu) and also a payment of 3 lacs of rupees. But the real cause of Hyder's good fortune was the defeat of Sadashiv Rao Bhau in the Third Battle of Panipat on 7 Jan, 1761 by Ahmed Shah Abdali. After the retreat of the Marathas, Hyder was joined by Mukhdoom Ali.

Deposition of Khande Rao (1761): Meanwhile, Khande Rao came up with a huge army and Hyder was defeated with heavy losses. Hyder Ali retired towards Hardanahalli and appealed to the exiled Nanjaraj for support. "With the semblance of real penitence and grief, he attributed all his misfortunes to the gross ingratitude with which he had requited the patronage of Nanjaraj; entreated him to resume the direction of public affairs, and take his old servant once more under his protection". Nanjaraj gave Hyder the command of his troops; and with this force Hyder closely pursued Khande Rao and achieved victory through a clever stratagem. He dispatched letters with the name and seal of Nanjaraj to the main leaders of Khande Rao's army with the content to seize him (Khande Rao) and deliver him to Nanjaraj; and made such arrangement that the bearer of these letters would purposefully fell into the hands of Khande Rao. On seeing those letters, Khande Rao conceived that he was betrayed by his own army. He seized with panic and escaped to Srirangapatna. When Khande Rao's troops came to know about his flight, they also began to flee. Hyder thus achieved victory and captured all of Khande Rao infantry, guns and baggage.


Hyder becomes the De facto Ruler (1761-1782): Hyder encamped near Srirangapatna with a large force and sent a message to the Raja demanding the surrender of Khande Rao; and also the liquidation of funds the state had owed him. He also wrote that "after the payment of these arrears if the Raja should be pleased to continue him in his service, it was well; if not, he would depart and seek fortune elsewhere". As per the proposal, a 3 lac territory was reserved for the Raja and 1 lac territory for Nanjaraj. Hyder assumed the management of the rest of the territories and made himself responsible for the expenses of the army and the liquidation of the arrears. Hyder's usurpation was now complete. Khande Rao was handed over to Hyder with a request that he should not be killed. Hyder kept him in an iron cage like a parrot; feeding him milk and rice till his death. Hyder appointed Mukhdoom Ali the governor of Srirangapatna.

The Nawab of Sira (1761): Sira (in Tumkur, Mysore) was the Mughal headquarters in the Deccan during the reign of Aurangzeb. The Province of Sira consisted of seven districts: Basavapatna, Budihal, Sira, Penukonda, Dod-Ballapur, Hoskote and Kolar. Harpanahalli, Kondarpi, Anegundi, Bednore, Chitaldroog and Mysore were considered to be its tributary States by the Mughals. Sira was taken by the Marathas in 1757.

Taking advantage of the defeat of the Marathas at Panipat, Basalat Jung, brother of the Nizam Salabat Jung, and the governor of Adoni, planned to capture Sira, then in the possession of the Marathas. But since the Marathas had made a strong defense, he requested Hyder's help. Hyder sent an ambassador to Basalat Jung and negotiated the Nawabship of Sira for 3 lacs of rupees. As the Nawab of Sira, he gained supremacy over the Raja of Mysore.