Posted onMay 13, 2016
Background: In 1770, when Madhav Rao invaded Mysore a third time Hyder demanded the assistance of the British, however they didn't come up for his aid. Hyder was compelled to sue for peace and in Jun 1772, a treaty was concluded on his agreement to pay the Marathas thirty lacs of rupees. Half of the amount was immediately paid by him and for the rest Kolar, Hoskote, Sira, Doddaballapur, Maddagiri, Chitradurga and Gurramkonda were left in the Marathas hands. Shortly after this Peshwa Madhav Rao died in Nov 1772 and was succeeded by his brother Narayan Rao and then by his uncle Raghunatha Rao. Hyder conquered Coorg (also known as Kodagu) in 1773 and recaptured Malabar in the same year; while his son Tipu recovered all the places in the north that were ceded to the Marathas. Thus between Sep 1773 and Feb 1774, Hyder completely recovered all the territories he had lost. Bellary and Gutti were captured in 1776. The failure of negotiations with the British had made Hyder ill-disposed towards them. During the American War of Independence in 1778, France joined America against British; and upon this the British attacked the French possessions in India. Pondicherry was taken in Oct 1778; and Mahe in Mar 1779, which was within Hyder's territories. Offended by this Hyder threatened to plunder Arcot, the capital of Carnatic.

The Second Anglo-Mysore war started when Hyder Ali invaded the Carnatic in Jul 1780. General Sir Hector Munro assumed the command of the British forces and marched his army to Kanchipuram. Hyder detached his son Tipu with 40,000 men to intercept Colonel William Baillie, who was on his way with his army to join Munro. In this Battle at Pollilur, also known as battle of Perambakam, on 10 Sep 1780, Tipu defeated Colonel Baillie's forces, which was the most humiliating defeat ever suffered by the British at Indian hands. On hearing this news, Sir Hector Munro threw off all his guns into the tank of Kanchipuram and retreated to Madras.

After Baillie's defeat, Hyder recommenced the siege of Arcot and took it by November. On 1 July, 1781, General Sir Eyre Coote defeated Hyder's forces at the battle of Porto Novo. Tipu who was investing Wandiwash, was recalled to join his father at Arcot. However, Hyder was again defeated in two successive battles, at Pollilur on 27th August 1781, and then at Sholinghur on 27 September 1781. In February 1782, Tipu inflicted a crushing defeat on Colonel Braithwaite at Tanjore. In the battle at Arni fought in June 1782, Hyder crushed the British under Eyre Coote.

Death of Hyder Ali Khan (7th Dec 1782): While in Malabar, in August 1782, the British under Colonel Humberstone seized Calicut and advanced towards Palakkad. Hearing this, Hyder dispatched Tipu to oppose them, and the British retreated to Ponnani. Tipu with the assistance of the French resisted the British forces who were preparing for the siege of Palakkad. He made a vigorous attack at Ponnani but was compelled to retreat. While waiting for the reinforcements he received the news of his father's death.

Hyder had for a long time been suffering from cancer on his back. He died on 7th December, 1782 at Narasingarayanpet near Chittoor (in Andhra Pradesh), at the age of sixty. The ministers Purnaiya and Krisha Rao kept Hyder's death as secret until the arrival of Tipu from Malabar. Hyder's body was sent to Kolar in a chest resembling some valuable spoil. 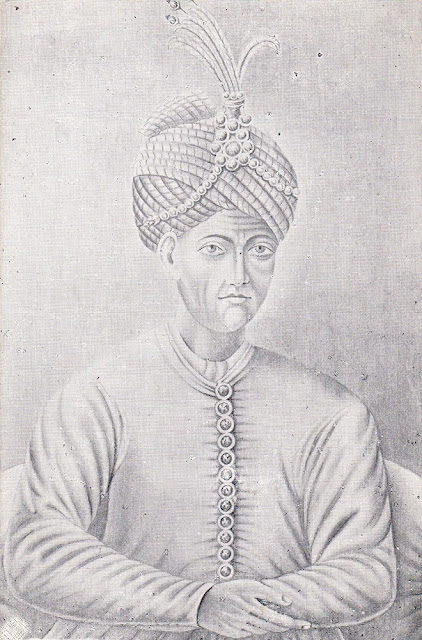 When the news of Hyder's death reached the British, General Matthews seized Hyder Nagar, Bednore, Honavar and Mangalore. Tipu divided his army into two columns, with one retook Hyder Nagar and Kavale-durga and with the other Anantpur. Afterwards Bednore was also recovered with much difficulty. Tipu now laid siege to Mangalore, but meanwhile, the French withdrew their support for Tipu following the Treaty of Paris in July 1783. Tipu who had employed to block the provisions to the garrison at Mangalore, agreed to a temporary armistice; and the starved-out garrison was allowed to retire to Tellicherry. As soon as Tipu left Carnatic, General Stuart captured Wandiwash, Karunguli and Vellore. In Malabar, after capturing Palakkad and Coimbatore, Colonel Fullerton was about to advance against Srirangapatna, but by then, the Madras government had sent envoys to Tipu to make terms of peace (Mangalore continued in the hands of British until peace concluded between Tipu Sultan and the British in the following year).

Thus the second Mysore war came to an end with the Treaty of Mangalore in March 11, 1784 signed between Tipu Sultan and the British East India Company; and under the terms of the treaty, both sides once again returned the conquered territories as well as the prisoners.

Haidar Ali and Tipu Sultan and the struggle with the Musulman powers of the South by Bowring, Lewin Benthan