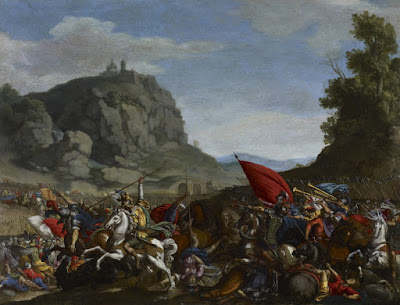 The Greek conqueror Alexander, popularly known as Alexander the Great, was the King of Macedonia in Greece, from 336 BC to 323 BC. In 326 BC, Alexander invaded India; He crossed the river Indus (also known as Sindhu) and advanced towards Taxila or Takshasila, situated between the rivers Indus and Jhelum [Hydaspes]. It is said that Alexander was well received by Ambhi [Omphis], also known as Taxiles (the King of Taxila), who surrendered both himself and his kingdom to Alexander. After appointing a viceroy and also leaving a garrison at Taxila, Alexander marched towards Jhelum river.

The country of Paurava [Porus] lies between the rivers Jhelum and Chenab [Acesines]. According to the Greek historian Strabo, it is an extensive and fertile district, containing nearly three hundred cities. Porus with his large army and his array of elephants encamped on the other side of the river to obstruct Alexander's passage. Historians are in different opinion about the strength of Porus's troops; According to Diodorus, he had more than 50,000 infantry, about 3,000 cavalry, more than 1,000 chariots and 130 elephants. Curtius gives Porus's strength as 30,000 foot, 300 chariots and 85 elephants; Plutarch as 20,000 foot and 2000 horse. Arrian gives 4000 horse, 300 chariots, 200 elephants and 30,000 foot. Porus also had the support of a neighboring king Abisares, whose kingdom lies among the mountains above Porus' territory.

Curtius says that Alexander had demanded Porus that he should pay tribute and come to meet him on the frontiers of his dominions. To this Porus replied that he would meet Alexander at the place appointed but with arms.

Porus sent detachments of his troops to guard all parts of the river where it could be easily forded for preventing the landing of Alexander's army. When Alexander saw this he thought means for crossing the river being unobserved by Porus. He took his army over an island in the river that was overspread with jungle. Slowly they passed beyond the island and reached the bank. Aristoboulos says that the son of Porus came up with 60 chariots before Alexander made the final passage from the island. Some writers say that while the troops were landing Alexander was wounded by the prince (Porus' son) and that his horse Bucephalus was killed during this encounter. Ptolemy says that the prince arrived with 2000 men and 120 chariots while the troops were landing and that he was killed in the following engagement.

Porus marched with his whole army against Alexander. Two sons of Porus fell in the battle. When Porus, who exhibited great talent in the battle, performing the deeds not only of a general but also of a valiant soldier, saw the slaughter of his cavalry, and some of his elephants lying dead, while most of his infantry had perished, he did not flee from the field as Darius the Great did; but as long as anybody of Indians remained compact in the battle, he kept up the struggle. But at last, having received a wound on the right shoulder, which part of his body alone was unprotected during the battle, he wheeled round. When he found himself wounded, he turned his elephant round and began to retire. Seeing this, Alexander sent Meroes, a friend of Porus, to him and he was then conducted to Alexander. When Porus was brought before Alexander, Alexander asked him what treatment he would like to receive. To this, Porus replied, "Treat me, Alexander, in a kingly way!" Alexander being pleased at the reply said, "For my own sake, Porus, thou shalt be thus treated; but for thy own sake do thou demand what is pleasing to thee!" Porus replied that in what he had asked everything was included. it is said that Alexander, being still more pleased at this remark, restored Porus all his kingdom back, and also added another territory of still greater extent.


It was during this battle that Alexander's favorite horse Bucephalus was killed. Since the age of 12, Bucephalus was Alexander's closest companion, who had accompanied him in all of his battles. Alexander founded a city on that spot where the horse died, named Bucephala. Another city was built where the battle took place which he called Nicaia.

The kingdom between rivers Chenab and Ravi was ruled by the Younger Porus, nephew of the King Porus. Alexander sent his army in pursuit of the Younger Porus, who had fled from his country with his troops. When Alexander crossed the river Ravi [Hydraotes] he found most of the natives willing to surrender. The Kathaians of Sangala and their neighboring tribes declared battle against Alexander, but without much difficulty, Alexander subdued them. He then advanced to the river Beas [Hyphasis] and desired to advance further. It was then reported to Alexander that the inhabitants of Hindustan beyond Beas were brave in war and they had great number of elephants than other Indian kings (the Nandas). Learning this Alexander's army lose heart and refused to advance further. Before his return, Alexander conferred all the country west of the river Beas to Porus. It is said that Alexander erected twelve altars on the banks of Beas as a memorial to his conquest of India.

Alexander died in the year 323 BC.

Ancient India - Its Invasion by Alexander the Great

Political History of Ancient India: From the Accession of Parikshit to the Extinction of the Gupta Dynasty by Hemchandra Raychaudhuri