Lodi dynasty of Delhi (1451-1526) was the first Afghan empire in India which was founded by Sultan Bahlol Lodi in 1451. Ibrahim Lodi, grandson of Sultan Bahlol, was the third ruler of Lodi dynasty. When Sikandar Lodi (son of Bahlol Lodi) died he left two sons by one wife, Ibrahim and Jalal. The nobles of the court placed Ibrahim on the throne of Delhi (Nov, 1517) as he was known for his personal beauty as well as moral qualities. But shortly after that Jalal Khan was raised to the the throne of Jaunpur. The reason for the establishment of a separate kingdom of Jaunpur is given by Ferishta, who says that unlike his father and grandfather, Ibrahim made no distinction among his officers; he declared that kings should have no relations nor clansmen but all should be considered as subjects of the state. The Afghan chiefs, who had been hitherto allowed to sit near the throne, were compelled to stand in front of the throne. The Afghan could not bear this insult and soon a conspiracy was formed by them. They conspired to raise Jalal Khan on to the throne of Jaunpur. According to Nimatulla, it was due to Sultan Ibrahim's irritable temper that the Afghan amirs decided to limit his power upto Jaunpur. 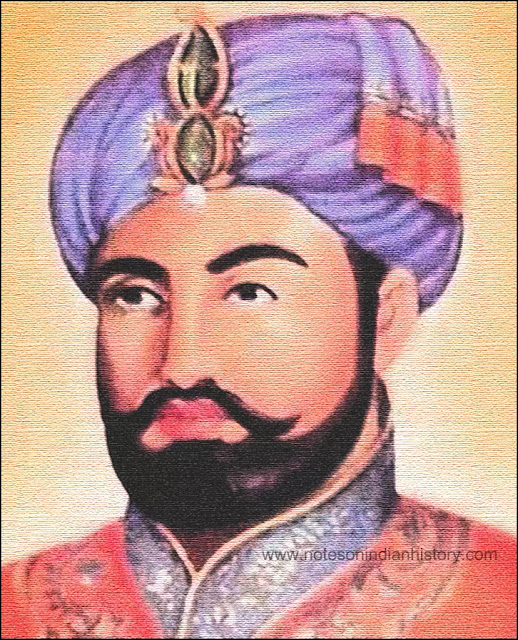 At this time Khan Jahan Lodi came to Ibrahim's court at Delhi and blamed the nobles for dividing the kingdom. After much debate the nobles agreed to bring Jalal Khan to Delhi as he had not yet acquired sovereignty. Many envoys were sent to Jalal Khan for this purpose however he refused to return. Ibrahim sent firmans to the nobles and amirs of Jaunpur with honours and gifts and prevented them from giving any allegiance to Jalal. All those chiefs stopped to acknowledge the authority of Jalal Khan and sided with Sultan Ibrahim. Thus victorious Ibrahim celebrated his accession to the throne.

When Jalal Khan heard of this attachment of grandees to Sultan Ibrahim, he left Jaunpur with his followers and established himself at Kalpi assuming the title of Sultan Jalal-ud-din. Azam Humayun also sided with him as he had been ill-disposed towards Sultan Ibrahim. Together they captured Jaunpur and marched towards Oudh. Hearing of Jalal Khan's revolt, Ibrahim Lodi imprisoned his bothers Ismail, Husain, Daulat and Mahmud at the fort of Hansi. On his march towards Oudh, Ibrahim got news that Azam Humayun and his son Fath Khan had deserted Jalal Khan and were coming to attend him. Azam Humayun was well received and sent against Jalal Khan to Kalpi with a large force. Jalal Khan marched to Agra for capturing it, but finally agreed to the peace treaty proposed by Malik Adam Ghakkar, who promised him the government of Kalpi if he submit to the Sultan. But Ibrahim did not agree for this peace treaty and sent orders to capture Jalal Khan. Jalal Khan again fled and took protection with Rai Man Singh of Gwalior.

Conquest of Gwalior (1518): Azam Humayun Shirwani was sent with a force to besiege the fort of Gwalior. Hearing this Jalal Khan fled from Gwalior to the court of Sultan Mahmud of Malwa. By this time Rai Man Singh had died and was succeeded by his son Rai Bikramjit. The fortress of Badalgarh, which lied below the fortress of Gwalior was taken along with the copper bull (The copper bull had been worshiped by Hindus). It was sent to Delhi and placed at the Baghdad gate. (During the reign of Akbar, it was melted down for making cannon)

Death of Jalal Khan: In those days Ibrahim who lost faith in the old amirs of his father, imprisoned most of them and expelled many others. Ahmed Yadgar tells us that after conquering Gwalior, Sultan Ibrahim became arrogant and began to maltreat and punish the nobles of his father. At this time Jalal Khan fled from Malwa to Garha Katanga since he was not given a proper treatment by Sultan Mahmud. The Gonds took him prisoner and sent to Ibrahim. Jalal was then sent to the fort of Hansi but on the way he was murdered.

Mian Bhua, grand wazir of Sultan Sikandar, was imprisoned and put in chains. The reason was that, being overconfident of his former services, he didn't act according to Sultan's wishes. However, Ibrahim conferred upon his son, his father's position and dignities in the court.

Other Revolts: Azam Humayun Shirwani was one of the grandees of the kingdom since the days of Bahlol Lodi. Sultan recalled and imprisoned Azam Humayun who had nearly captured the fort of Gwalior. Islam Khan, son of Azam Humayun, revolted but was defeated. Many amirs also raised rebellion seeing the confinement of Mian Bhua and Azam Humayun. Ibrahim successfully crushed those revolts. Meanwhile both Mian Bhuda and Azam Humayun died due to illness under imprisonment. When Darya Khan Nuhani, governor of Bihar, died his son Bahadur Khan revolted and occupied Bihar as far as Sambal, assuming the title of Sultan Muhammad Shah.

Dilawar Khan, son of Daulat Khan Lodi the governor of Punjab, was called by Ibrahim from Lahore to Agra, but being suspicious of Sultan's intentions, he fled from the court and returned to his father. Daulat Khan thought it's better to place himself under the protection of some other sovereign rather than raising a rebellion. He formed an alliance with Ghazi Khan Lodi and other nobles of Punjab and sent an invitation through Alam Khan Lodi, a son of the late Sultan Bahlol Lodi, to Babur at Kabul requesting him to invade India.

Shortly after that Babur marched to India, captured Lahore. When Ibrahim learned this he was shocked and wrote to Daulat Khan, "You have reached your present rank through my father's kindness; why have you brought the Mughals into my paternal inheritance and made it over to them? I swear on the Koran that I will never molest you or your children. Reflect and abandon your present absurd project". But Daulat Khan replied, "It is true that I was reared and raised from the dust and brought up by Sultan Sikandar. He was studious of pleasing: and he never endeavored to put me to death. Whereas, while you were still young, you listened to two or three insidious advisers, and thus shook your empire to its foundation. You also destroyed many of your father's servants, who were the pillars of the kingdom, and put an end to the confidence which others reposed in you. I have not brought the Mughals, but your own bad actions".

Defeats Alam Khan: Alam Khan and Daulat Khan Lodi wanted the Mughal troops to advanced against Delhi and capture Ibrahim Lodi before the arrival of Babur (who was then at Kabul). Alam Khan marched with his force to Delhi and invested it. However Ibrahim was able to crush him and his forces. Alam Khan retreated to Punjab.

About this time Ibrahim Lodi consulted the astrologers about on whose side the victory should be. They replied, "It appears from the motion of the stars that the whole of our horses and elephants have gone over to the Mughal army". Ibrahim said, "This is a proof that I shall vanquish the Mughals". They replied, "So let it be". Hamid Khan, governor of Hissar Feroza, who was coming to the assistance of Ibrahim was defeated by the forces of Prince Humayun, son of Babur (Feb 1526). Afterwards many of Sultan's officers left him and went over to Babur.

It is said that the day before the battle Ibrahim summoned all his nobles and wanted them to dress in the best clothes and made preparations for a festival. He delivered all gold, pearls, jewels and other valuable to them and said, "O friends, tomorrow we shall battle with the Mughal army. If I gain victory, I will endeavour to please you; if I do not, be at least content with these presents and my declared intentions".


In the morning Sultan Ibrahim with his forces marched towards Panipat. Although the Afghan army greatly outnumbered its opponents, the soldiers were dispirited and disheartened from the Sultan's ill ­treatment. When the battle was about to lost Mahmud Khan, an officer came to Ibrahim and requested him to leave the battle field. He said, "If the king is saved, it will be easy to find another army and again make war against the Mughals. We shall soon be able to find an opportunity of accomplishing our wishes". But Sultan Ibrahim replied that it is a disgrace for kings to fly from the battle field. He added, "My nobles, my companions, my well-wishers and friends have partaken of the cup of martyrdom. One has fallen here, another there; where then can I go now? My horse's legs are dyed with blood up to his chest. While I was king I governed the empire as I pleased; now fortune has sided with the Mughals, what pleasure is there in life? It is better that I should be like my friends, in the dust and in blood". On saying this he rushed into fight with 5000 bravest horsemen and killed many Mughals and obtained martyrdom towards the close of the day.

When Babur was informed of Sultan Ibrahim's death, he was standing in the rear. He accordingly went out to the plain where the slain were lying, and found that powerful Sultan prostrate in the dust and weltering in blood, the royal crown fallen from his head, the canopy also on the ground. Babur ordered his men to bury him on the spot where he had fallen. One can see Sultan Ibrahim Lodi's tomb at Panipat near the tehsil office. 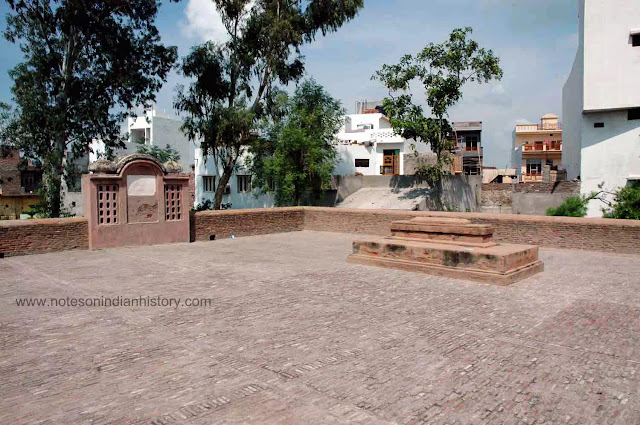 Historians are in different opinion about Sultan Sikandar Lodi's sons. Anyway, Ibrahim was certainly not the eldest son of Sikandar Lodi.