Posted onJanuary 12, 2018
We have seen that during the American War of Independence in 1778, the British attacked the French possessions in India. The French settlement of Mahe (Mayyazhi) on the Malabar Coast was taken in Mar 1779, which was within Hyder's Ali's territories. Offended by this Hyder threatened to plunder Arcot, the capital of Carnatic. The British East India Company decided to send an envoy to Hyder to find out his disposition towards them and to assure him about the pacific intentions of the Madras government.

Father Christian Frederick Schwartz, a Danish missionary, had a marvelous gift for acquiring languages. After his arrival in India, he learned English, Persian, Hindi and Tamil. His principal residence in India was at Tanjore. Schwartz was entrusted for the mission to Hyder Ali by Thomas Rumbold, the governor of Madras. The governor addressed him as follows, "It appears that Hyder Ali Khan entertains warlike designs. Now as we wish to know his views with certainty on this momentous subject, it has appeared to us that you would be the most suitable person to employ for that purpose. You can speak Hindustani, and require in your discourses no interpreter; we are satisfied that you act impartially, and will not allow yourself to be bribed by any one; and you have it in your power to travel through the country without external pomp and show, and to remain unnoticed the whole journey, until you speak with Hyder himself".

Father Schwartz had been acted as a medium of communication between the British and the native Princes of India upon many occasions before. He was looked upon as the suitable person for such servicess on account of his perfect acquaintance with the native languages and also various other qualifications. Schwartz records that he undertook the mission for three reasons: "First, because the mission to Hyder was not attended with any political intrigues; second, because this would enable me to announce the Gospel of God my Saviour in many parts where it had never been known before; and third, as the honourable Company and the government had shown me repeated kindness, I conceived that by this journey I might give them some marks of my gratitude".

On 25th August 1779, Schwartz reached Hyder's capital at Srirangapatna. He records that as Hyder was quite unconcerned about religion, he might discourse of religion day and night, without fear of giving him the least offence. Hyder himself has no religion, and leaves every one to his choice.


Description of Hyder Ali's Palace: The palace of Hyder Ali, built by himself, according to the style of eastern architecture, was very beautiful. It was entirely of hewn stone with numerous stone pillars. At the end of the pagoda stands the ancient palace of the Mysore Kings. Hyder allows the King an annual income. The King has his servants, but was treated as a prisoner of state. Hyder often visits him, and stands in his presence as a servant. Thus men of the world can dissemble. The King's sons are all dead; and the general opinion is that they were secretly dispatched.

About Hyder's officers: Though Hyder often rewards his servants, the chief motive here is fear. Every one performs his task from fear, well knowing what ensues upon neglect of duty. Hyder keeps two hundred persons who carry whips in constant readiness. No day passes without many being chastised. The governor of a district is whipped in the same manner as the meanest groom. Hyder treats the high and low all alike; even his two sons and his son-in-law are subjected to the same cruel treatment. When any one of his highest officers has been thus publicly flogged, he does not allow him to resign his employment, but compels him to retain it, that the marks of the whip on his body may serve to deter him from repeating the offence. Hyder's army consisted of many Europeans: French and Germans. Some Malabar Christians were also among them. The household of Hyder consisted chiefly of Brahmins.

The meeting with Hyder was held in a large hall, adorned with marble pillars opening into the garden. Hyder received the missionary with great respect. Schwartz writes, "When I was admitted to an audience, Hyder bade me sit next to him on the floor, which was covered with the richest carpets; yet I was not asked to take off my shoes. He listened to all I had to say; spoke very frankly, and said that the Europeans had violated their public engagements, he was willing to live in peace with them, therefore.... Finally he wrote a letter or caused one to be written, had it read to me and said, "I have stated the substance of our conversation; but you will be able to give further explanations personally". Hyder considered my visit as preparatory to a proposal for peace; but the nawab at Madras (Muhammad Ali Khan Walla Jah, the nawab of Arcot) defeated all these intentions. When I was sitting near Hyder, I remarked particularly how his affairs, one after another, were rapidly transacted. When he had stopped speaking, an account of the districts, and what was written relative to them, was read over to him. He heard it and dictated an immediate answer. The secretaries hastened away, wrote the letter, read it before him, and Hyder affixed his seal to it. In this way many letters were written in one evening. Hyder can neither read nor write; but he has an excellent memory. Few have the courage to impose upon him. He orders one to write a letter, and read it over to him; then he calls another, and hears it read a second time; and if the writer has not written it strictly according to the order, but has mentioned something dictated by his own fancy, it costs him his life". 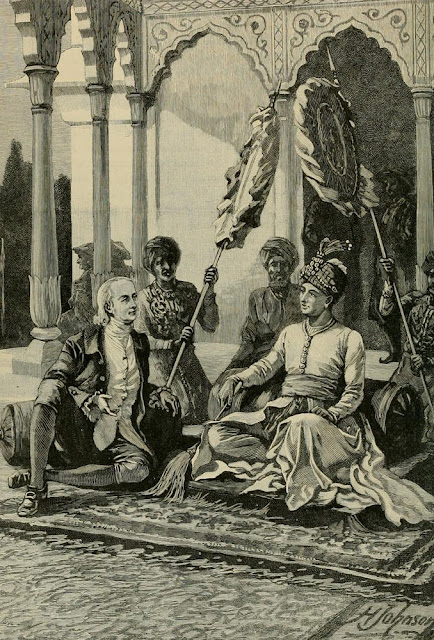 Schwartz says "On the last evening Hyder requested me to speak Persian before him, as I had done with his people". Hyder can understand Persian, but does not speak it. Schwartz then explained to him the motives of his mission. "You may perhaps wonder what could have induced me, a priest, who has nothing to do with political concerns, to come to you. The sole object of my journey was to promote peace between you and the Company and of consequence the welfare of the poor inhabitants, which was not inconsistent with my office as a teacher". Hyder said that he was of the same opinion as the missionary; and wish the English would live in peace with him.

Schwartz returned from his mission in October 1779. Hyder had sent 300 rupees to his palanquin to serve for traveling expenses. On his return to Madras, Schwartz gave the three hundred rupees to the honourable Board, who requested him to keep it. Therefore he accepted the money as the first fund for an English orphan school at Tanjore.

Hyder respectfully treated the missionary but expressed his true feelings towards the British in his letter to the governor at Madras, "I have not taken any revenge till this time, it is no matter, but if you henceforth forgetting all treaties and engagements with the Company, still are intent to breaking with me, what advantage can attend writing to you? You are acquainted with everything, it is right to act in all things with prudence and foresight".

The Second Anglo-Mysore war commenced when Hyder Ali invaded the Carnatic in Jul 1780. During Hyder's invasion of the Carnatic, he gave orders to his officers "to permit the venerable padre Schwartz to pass unmolested, and to show him respect and kindness, for he is a holy man and means no harm to my government".

Missionary - A person sent on a religious mission, especially to promote Christianity

Remains of the Rev. C.F. Schwartz, missionary in India consisting of his letters and journals; with a sketch of his life by Christian Frederick Swartz
Share
Post a Comment
Labels#Mysore/Karnataka
Newer
Older