Posted onFebruary 14, 2018
Perhaps the most famous love story in Indian history is the romance of Salim and Anarkali. Salim was the son of Akbar, who afterwards became emperor Jahangir. There are many novels, plays and movies based on their tragic love story, but what was the true fact?

Legend says that Anarkali (Meaning: Pomegranate Blossom) was a name given to Nadira Begum or Sharif-un-nissa, who was the wife or concubine of Akbar. One day Akbar was sitting, arranging his turban by a mirror which he held in his hand, and Anarkali was standing beside him. Suddenly Prince Salim entered the room and smiled on Anarkali. She returned the greeting, and Akbar, who saw in his mirror (or by means of the mirrors on the walls of the Shish Mahal, or Hall of Mirrors) what passed between the two, rose up in his wrath and ordered that Anarkali should be buried alive. After the death of Akbar, when Prince Salim became the king, he constructed a tomb over her remains at Lahore.

In another version of the story, Anarkali was the maid servant of Akbar's chief wife. Salim wanted to marry her, but Akbar objected to this marriage. Since Anarkali rejected Akbar's order to forsake her love for Salim, Akbar entombed her alive at Lahore.

In a third version, Nadira's father had fled to Persia with her for his safety. On the way he was assassinated by a gang of robbers. Nadira was presented to Akbar at Lahore by the governor of Kabul in 1589. For ten years she lived in the imperial harem entertaining the royal guests with her superb music and exquisite dancing. Possessed with a lovely figure and bewitching beauty, she was given the name of Anarkali. Out of all the royal guests it was prince Salim whose love she had conquered and suffered most. Abul Fazl found it out. A trap was laid in the royal palace. Anarkali and Salim were invited to attend a concert. After the dancing and singing was over, Anarkali was taken prisoner. Prince Salim somehow managed to escape with her, but the spies of Akbar soon found it out and she was again captured. Akbar ordered that Anarkali should be buried alive.

According to a strange fable in 'A Gazetteer of the Countries Adjacent to India on the North-West', Anarkali was a handsome youth!, "Another of these huge ornamental tombs is styled that of Anarkali, a youth, according to tradition, a favourite of one of the emperors, who, instigated by jealousy, having seen him smile at a lady of the imperial zenana, caused him to be put to death, by being built up in a brick cell, and this splendid mausoleum to be raised over him", writes Edward Thornton.

History of Anarkali, the mysterious woman of the Mughal era:

Unfortunately, we do not have any evidences to prove her existence, except the so-called tomb at Lahore. Neither Akbar's chroniclers nor Jahangir himself had given any information about Anarkali. If Anarkali was not Akbar's wife or concubine, then why should Akbar oppose Salim from marrying her?. We have an example from Akbarnama, in which Abul Fazl says that Jahangir was very much attracted by Khas Mahal, the daughter of Zain Khan Koka, Akbar's foster-brother. Akbar at first objected to the marriage since Salim was already married to Sahibi Jamal, Zain Khan's niece. Abul Fazl recorded, "The Prince Royal became violently enamoured of the daughter of Zain Khan Koka, and meditated marrying her. His Majesty was displeased at the impropriety, but when he saw that his heart was immoderately affected, he, of necessity, gave his consent".

It is mentioned in the 'Glimpses of Glorious Bharatpur' that Akbar and Jahangir used Rup Bas palaces in Bharatpur, as shooting lodge. Jahangir is supposed to have seen Anarkali for the first time in the forests at Rup Bas when she was passing through with her parents, for Agra. This could be a part of just another legend.

The Tomb of Anarkali:

In Lahore, there stands a beautiful tomb believed to be that of Anarkali, though her name is not mentioned in any of the inscriptions. On the north side of the white marble sarcophagus, below the names of the Deity, is written, "Majnun Salim Akbar", meaning the enraptured Salim, son of Akbar. Then follows this remarkable verses. English translation is given here from three different sources: 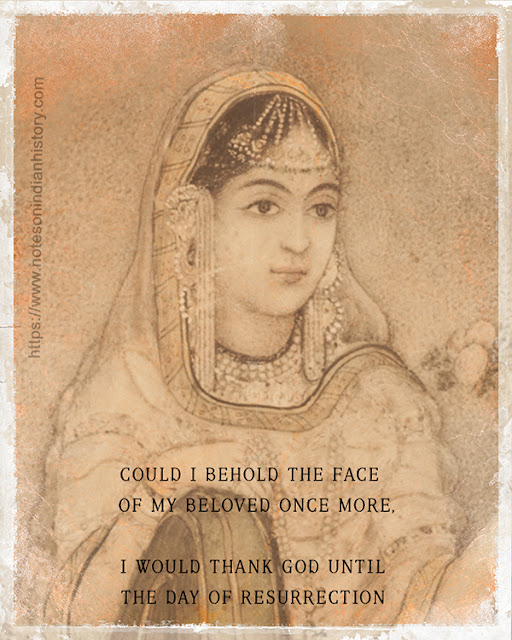 "Ah! If I could but once more see the face of my sweetheart
I should continue to thank my God upto the day of judgement" - (Beveridge)

"Could I behold the face of my beloved once more,
I would thank God until the day of resurrection" - (Wikipedia)

Historian Ishtiaq Hussain Qureshi mentions one more inscription in the tomb which reads thus, "The innocent who is murdered mercilessly and who dies after enduring much pain, is a martyr".

The date mentioned on the tombstone corresponds to 1599, probably refers to the death of Anarkali. "But this cannot be the date of her death, for Akbar was not at Lahore in that year. Either the story about her being buried alive is untrue or the date is not that of her death, but of the building of the tomb", says Beveridge, the translator of Akbarnama. On the west side there is another date, which corresponds to 1615, above the words, "In Lahore".

This tomb was fist mentioned by William Finch, a European traveler, who visited Lahore during the reign of Jahangir (1611); he records an interesting story; he says that the tomb is of Anarkali, one of Akbar's wives and mother of Prince Daniel, third son of Akbar; and she was buried alive at the order of Akbar. Abul Fazl mentioned that Prince Daniel's mother died in 1596; which does not match the date inscribed on the sarcophagus. In that case, the lady could not be Daniel's mother. [If William Finch had seen the tomb in 1611, then what was the purpose of inscribing the year 1615 on the tombstone?] Terry and Herbert states that Anarkali was Akbar's most beloved wife. Their accounts are below:

William Finch's Account: "a fair monument for Daniel Shah his mother, one of the Akbar his wives, with whom it is said Shah Salim had to do (her name was Immaeque Kelle or Pomegranate kernel); upon notice of which the King Akbar caused her to be enclosed quick within a wall in his mahal, where she died, and the king Jahangir, in token of his love, commands a sumptuous tomb to be built of stone in the midst of a foursquare garden richly walled, with a gate and divers rooms over it."

Edward Terry's Account: "Akbar Shah, the father of the reigning Mughal, had threatened to disinherit him, for some abuse to Anarkali, his most beloved wife, whose name signifies pomegranate kernel; but on his death-bed he restored him to the succession."


"Yet, notwithstanding that long continued custom there, for the eldest son to succeed the father in that great Mughal empire, Akbar Shah, father of the late king, upon high and just displeasure taken against his son, for climbing up unto the bed of Anarkali, his father's most beloved wife, and for other base actions of his, which stirred up his father's high displeasure against him, resolved to break that ancient custom; and therefore often in his lifetime protested, that not he, but his grand-child Sultan Khusrau, whom he always kept in his court, should succeed him in that empire."

Sir Thomas Herbert's Account: "His ungracious son Salim, holding fast his former impiety, and being at the head of an army of seventy thousand men, upon whom he had conferred many commands, refused to do it, unless he would give a general amnesty to all the conspirators, whose lives and well-beings were as dear to him as his own. This answer incensed his father to a denial, whereupon he dislodges his army, and marched to Allahabad, where he commanded all sorts of coin, of gold, silver, and brass to be stamped with his own name and motto; which, to vex his father, he sent to him, and besides courted his father's wife Anarkali."

Now, here's an interesting account of Anarkali stating that she was none other than the mother of Jahangir:

Account of R. R. W. Ellis: "Anarkali, meaning the pomegranate bud, is supposed to have been the pet name given by Akbar to his favourite wife Donna Juliana, of Portuguese extraction, with reference to Granada, the last Moorish stronghold in Spain, which has a split pomegranate, its armorial bearing, carved or painted on its public buildings, from the introduction of which fruit into Europe the name is said to be derived."

"Jahangir's tomb at Shahdara Bagh erected by his wife Nur Jahan, is situated four miles from Anarkali on the opposite side of the river Ravi; and the fact of the same locality for the interment of both having been selected, tends very much to strengthen the grounds upon which Donna Juliana or Anarkali, the favourite wife of Akbar, is supposed to have been the mother of Jahangir: the scandalous stories about her mentioned by Roe and Herbert, together with the fable by which, after changing her sex, she is said to have been buried alive by the humane and tender-hearted Akbar, having apparently been invented by parties opposed to her son's succession."

So the conclusions are:

It's a Mughal tomb and is of a lady of course.

Since there's the inscription, "Majnun Salim Akbar", we can confirm that the tomb was built by Jahangir. The lady resting inside must be his beloved, someone whom he loved so dearly. May be the construction of the tomb had started before he became the emperor. That's why the name Salim was inscribed there. In the very end, we may conclude that the story of Anarkali is not entirely fictitious. 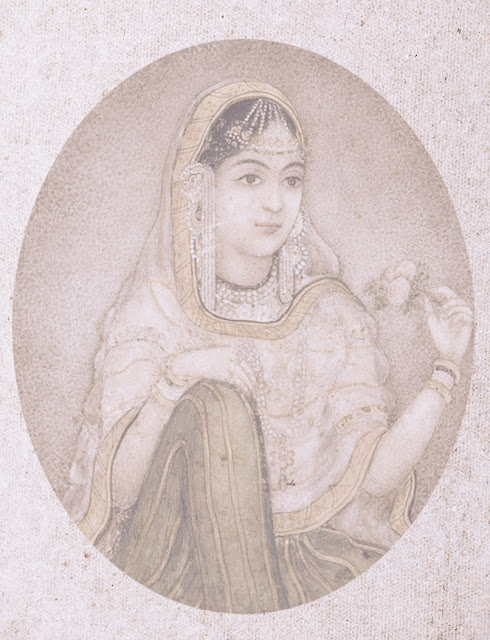 Handbook of the Panjab, Western Rajputana, Kashmir, and Upper Sindh By Edward B. Eastwick, John Murray