Posted onFebruary 21, 2018
A question on some general knowledge sites goes like this: "Which leader of the Mughal empire was very curious, but illiterate, and displayed religious tolerance to the extent that he took one wife from every of the four major religions"? The answer for this question was provided as Akbar, though, no court chronicle of Akbar mentions his marriage with ladies other than Muslim or Hindu; not even by Badauni, who criticized Akbar for everything.

The Goan historian Luis de Assis Correia in his new book 'Portuguese India and Mughal Relations 1510-1735', claims that Maryam Zamani (Mariam Zamani or Mariam-uz-Zamani) was in realty a Portuguese woman named Dona Maria Mascarenhas. The story of Maria Mascarenhas starts when she along with her younger sister Juliana Mascarenhas embark on a journey from Lisbon to Goa in September 1558. In that era it was the responsibility of the king of Portugal to take care of the orphans of noblemen killed in the service of the monarch, and girls of marriageable age were sent to the colonies. On the way, their ship was captured by pirates, who took the ladies to the court of Sultan Bahadur Shah of Gujarat. Bahadur Shah in turn presented them to the Mughal court.


"The moment Akbar cast his eyes on 17-year-old Maria, he fell in love with her and could not resist the desire to make her his wife," Correia says.

When the Portuguese initiated trade practices in India, large part of northern India was under the rule of the Mughals. The Portuguese conquered Goa under Alfonso de Albuquerque in 1510, after killing as many as 50,000 Sunnis. They could never accept that one of their own was living in the Mughal harem. The English too would never wanted to acknowledge a union between the Mughal ruler and the Portuguese, as the Portuguese were their trading rivals.

Correia suggests that Dona Maria Mascarenhas could have been the mother of Jahangir known as Maryam Zamani. The Mughals could not accept that a Christian, who fought the Mughals, had wed the Emperor. This is the reason why she has not been mentioned anywhere in Mughal records as Jahangir's mother. Correia added that if Jahangir had been born to a daughter of a great Rajput kingdom, surely he would want to boast the fact considering that the Mughals were eager to forge a strategic alliance with the Rajputs. Jahangir's patronization of Christianity and Jesuit missionaries can be taken as evidence to his lineage coming from a Portuguese woman rather than a Rajput princess. As for Juliana, she was in charge of the Seraglio as harem physician. She was married off by Akbar to the fugitive French prince, Jean Philip Bourbon and both died in Agra. (source: leading newspapers)

The story of Akbar's Christian wife has been already told by Colonel W. Kincaid, Frederic Fanthome, Ismael Gracias and C. A. Kincaid. Several writers such as Keene, Louis Rousselet, William Hunter and De Laet were also in the opinion that Akbar had a Christian wife. Blochmann, the translator of Ain-i-Akbari, also mentions an Armenian wife of Akbar. Following are their accounts:


Colonel Kincaid in his 'Indian Bourbons', records that in 1560, John Philip Bourbon, a French prince of Navarre, sailed for India, because he killed a relative of high position in a duel. He went to Delhi and sought an interview with Akbar. Being interested in his story, Akbar treated him with much favor and eventually appointed him to a post at his court. He also offered him in marriage Lady Juliana, sister of his Christian wife, who was a physician at the imperial harem. After the marriage, Akbar conferred on his brother-in-law the title of Nawab, and placed the seraglio under his care.

C. A. Kincaid and Gracias in 'Portuguese Lady at Mogal Court', says that in 1572, Akbar, after a bloodless campaign ended the Gujarat Kingdom, and in 1581, the Mughals attacked the Portuguese territories of Bassein and Daman, but were repelled by the governor Martini Alfonso de Mello. This repulse would have been followed by an attack in force which surely would have succeeded if the Emperor had not been stopped by something more terrible in his eyes than the Portuguese cannon and more persuasive than the lips of their ambassadors--the frowns and tears of a Lusitanian lady. Instead of war he made a treaty and sent envoys of congratulation to the new Portuguese king, Philip II of Castile. And this lady was Maria Makany, Akbar's Christian wife. Mr. Gracias further traced her origin and states that in the reign of King John III, there was founded at Lisbon a home for orphan girls of good family. When these girls reached women's state they were shipped off to various Portuguese colonies to make wives for the officials and settlers. Maria Mascarenhas, one of these ladies, was captured with her sister by the Dutch, was brought to Surat and thence sold at the Mughal court, where she became one of Akbar's queens, and is known to history under the Musalman corruption of her name Maria Makany. Her sister Juliana Mascarenhas was married to the fugitive prince John Philip Bourbon of Navarre as said by Colonel Kincaid.

Frederic Fanthome, author of 'Reminiscences of Agra', strongly believed that Akbar had a christian wife and whose name was Mary. He claimed her existence by referring a firman of Shah Alam, which shows that a pension had been allowed to Catholic priests by the recommendation of Queen Mary. Moreover, the cenotaph at Mariam's tomb (Rauza Mariam) at Agra bears no inscription on it, not even few verses of the Koran. He further states that someone saw a cross on the grave before its chamber was bricked up. 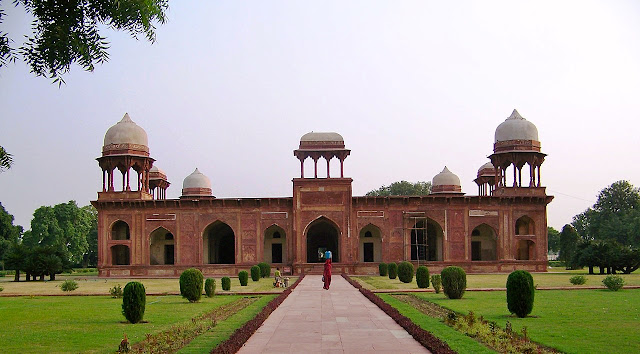 Some Facts Provided by MacLagan, Father Felix and Father Hosten:

According to Father Felix, Akbar's Christian wife is a myth. As for the firman of Shah Alam, which according to Mr. Fanthome showing a pension had been allowed to Catholic priests by the recommendation of Queen Mary, does not mention such a thing as 'by the recommendation of the Queen Mary'. Mr. Fanthome had misread the words 'az qadim' for 'Az Mariyam'.

According to Mr. Kincaid, Maria's marriage with Akbar took place before 1581. But, it is impossible that she should have been captured by the Dutch who had not then appeared in Indian waters.


Father Felix further states that at the Mughal court, there was a lady Juliana, daughter of an Armenian merchant named Khwaja Abdullahi (Abdu-l-Hayy), high in favour with Akbar; possibly Akbar's ambassador to Goa in 1579. This lady Juliana was married to another Armenian named Iskandar of Aleppo. Mirza Zul Qarnayn and Mirza Scanderus were born to them. Juliana died at the birth of this latter and Akbar took both boys, and brought up in his seraglio by a childless Begum, most probably, Ruqayya Sultan Begum.

Father Hosten and MacLagan explained that the passage in the 'Tuzuk-i-Jahangiri', which Blochmann gives as his authority, merely states that the daughter of Abdu-l-Hayy, an Armenian, who was in the service of Akbar's harem, was given in marriage to Iskandar, father of Zul Qarnayn.

MacLagan suspects that the story of Akbar's Christian wife must have originated from the title of Akbar's mother Miriam Makani and the title of Jahangir's mother Maryam Zamani. Edmund Smith of the Archaeological Survey of India, had the crypt opened many years ago, but find no sign of a cross or other Christian symbol upon the grave.


Father Hosten had done a great research on this topic; he found two pictures of Akbar with Christian wife, but they not seemed authentic. Below is a 20th century painting in Mughal style, showing Akbar with his imaginary Christian wife.

Above is the painting of Maryam Zamani depicted as Christian lady. As you can see, she is wearing a cross in this painting. Now, check out the below painting. 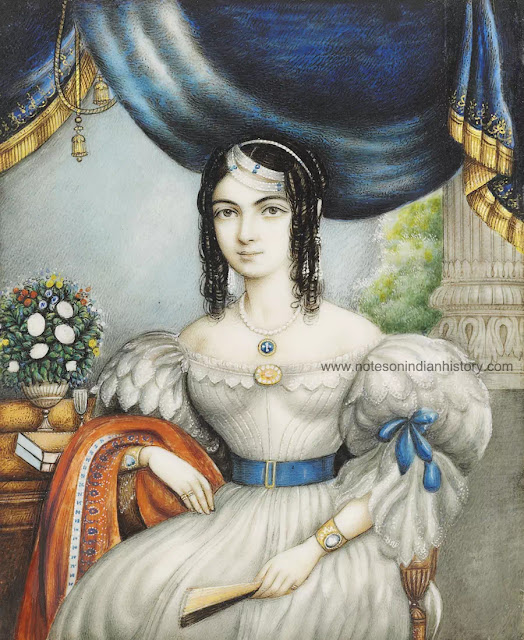 This is a painting of Zinat Mahal, wife of the last Mughal emperor Bahadur Shah Zafar, in European dress, of mid 19th century.

Here's one miniature painting of 'An Edwardian framed oval painted miniature of a young Indian princess'. 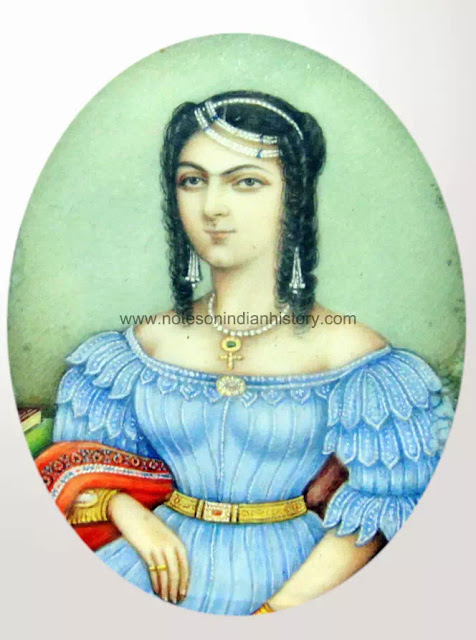 As you can see these three paintings look identical, perhaps these are of mid 19th century. This alone confirms that the 'Faqir Khana Museum painting' is not of the 'real' Maryam Zamani. The final conclusion is that Akbar's Christian wife is a myth.

According to Price's Jahangirnama, which is not considered authentic by historians, Daniel's mother was called Bibi Mariam, but she was not a Christian. Also Read R. R. W. Ellis's account on Anarkali.
Share
2 comments
Labels#Mughal
Newer
Older