Posted onFebruary 11, 2018
I read in some news websites that Sujan Rai, a Hindu historian, in his 'Khulasat-ut-Tawarikh' stated that the Amber princess was the mother of Jahangir; and her name had been suppressed by the Muslim historians because she was a Hindu. This does not seems to be authentic. In that were the case the Mughal historians should have erased from their books the identity of mothers of Khusrau and Shah Jahan too, as they were Hindu Rajput princesses.

Popular belief is that Hira Kunwari, the daughter of Raja Bharmal of Amber was the mother of Jahangir and she was given the title of Maryam Zamani, though, Jahangir himself refers her only as one of his father's wives. None of the Mughal historians reveals the identity of Maryam Zamani. Here is what Abul Fazl says about Akbar's first Hindu wife: "Raja Bharmal from the sincerity of his disposition made the arrangements for the marriage in the most admirable manner and brought his fortunate daughter to this station and placed her among the ladies of the harem". I suggest you to read this post to know more about the Amber princess, Jodh Bai and Maryam Zamani. Jahangirnama tells us that that Maryam Zamani died in 1623. 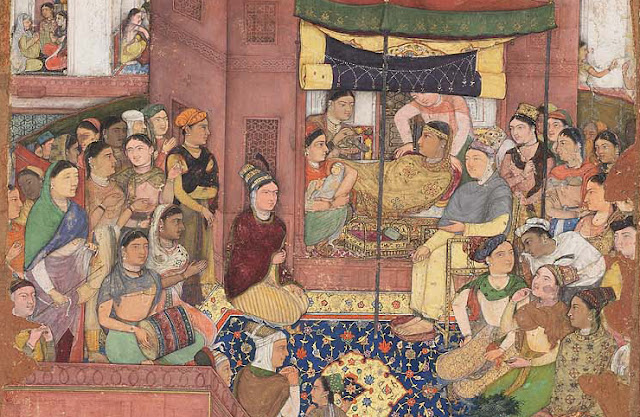 A Short Account of Akbar and Hinduism: We know that Akbar was not a religious bigot. He appointed many Rajputs to high positions at the court. From his youth, he had a special preference for Hindus. Later he renounced Islam too. Akbar celebrated the Hom (a kind of fire-worship), from his affection towards the Hindu princesses of his Harem. He afterwards started the practice of worshiping the sun; he used to wear a rakhi (on the wrist) and the Hindu mark on his forehead. Badauni says about Akbar, "Akbar, from his youth had been in company with Hindus, and thus he learnt to look upon a cow, which in their opinion is one of the reasons why the world still exists, as something holy. Besides, the Emperor was subject to the influence of the numerous Hindu princesses of the Harem, who had gained so great an ascendancy over him, as to make him forswear beef, garlic, onions and the wearing of a beard. He prohibited the slaughter of cows and abolished Jizya. His Hindu wives had also influenced him greatly against the eating of beef, garlic, onions and also wearing a beard. He had also introduced many Hindu customs and heresies in the court in order to please Hindus, and abstained from everything which were disgusting to them. Pigs and dogs were kept in the Harem, and to inspect them daily was considered a religious exercise. Hindus, who believe in incarnations, said that the boar belonged to the ten forms which God had once assumed. The saying of some wise men that a dog had ten virtues, and that a man, if he possess one of them, was a saint, was also quoted as a proof. Names like Ahmad, Muḥammad and Mustafa became offensive to him, who thereby wished to please the Hindus outside, and the princesses inside the Harem, till after some time those courtiers, who had such names, changed them; and such names as Yar Muhammad and Muḥammad Khan were altered to Rahmat". Akbar translated many Sanskrit works such as Ramayana, Mahabharata, Atharva Veda and Harivamsa into Persian.

In these circumstances, how can a Rajput princess build a mosque? [A Mosque at Lahore was built by Maryam Zamani in the reign of Jahangir, it is known as the Begum Shahi Mosque]. A tomb was discovered at Agra supposed to be of 'Maryam Zamani'. Unfortunately there is no inscription on the tomb. 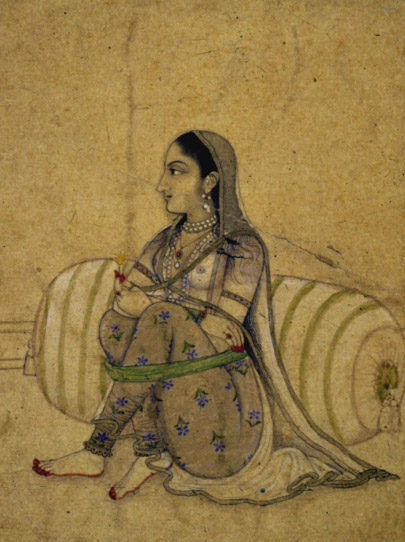 It was Akbar's policy to form matrimonial alliance with Hindu princesses and to allow them to continue in their religion, with a view to securing the confidence of his Hindu subjects. As Frederic Fanthome says, to give Mohammedan names to those ladies would not be consistent with the said policy, for that would lend color to the supposition that they had been proselytized to Mohammedanism. Under these circumstances it is not likely that Akbar gave the Mohammedan name of Maryam Zamani to the daughter of Raja Bharmal.

Jahangir and Hinduism: Jahangir too never kept a beard. We can read in the Jahangirnama that, Jahangir honoured some of his Hindu wives with great Muslim titles: He talks about his first wife, Manbhawati Bai, the daughter of Raja Bhagwan Das, that "After Khusrau's birth I gave her the title of Shah Begum". He also mentions Karamsi, the daughter of Keshav Das Rathore, and the daughter of Rawal Bhim Singh of Jaisalmer, "In the time when I was prince I had taken his (Rawal Bhim Singh's) daughter in marriage, and called her by the title of Malika-Jahan (queen of the world)". He calls Mani Bai better known as Jodh Bai, the mother of Khurram (Shah Jahan), as Jagat Gosaine. It should be remembered that Musalman ladies were also given great titles. Some of these are: Hamida Banu Begum [Mariam Makani], Mihr-un-nissa [Nur Mahal and Nur Jahan]and Arjumand Banu Begum [Mumtaz Mahal and perhaps Taj Mahal].

Below are some lines from Akbarnama narrating the beauty and lineage of the Hindu princesses:

"At this time it was represented to His Majesty that Raja Bhagwan Das, who held high office, and who had lofty lineage and abilities, had a daughter whose purity adorned her high extraction, and was endowed with beauty and graces; and that it was the wish of her family that she should be united to the prince"

"the daughter of Raja Bhagwan Das gave birth to a daughter in the house of Prince Sultan Salim, and there were various rejoicings"

"One of the occurrences was the birth of Sultan Khusrau...the auspicious pearl displayed itself in the city of Lahore, in the bedchamber of Prince Sultan Salim, from the chaste womb of the daughter of Raja Bhagwan Das"

"a daughter was born in Lahore to Prince Salim by the daughter of Dariya Malbhas. His Majesty gave her the name of Daulat Nisa"

"the daughter of the Motaraja gave birth to a son in the harem of Prince Sultan Salim in Lahore. He received the name of Sultan Khurram (afterwards Shah Jahan)"

"One of the occurrences was the marriage of Prince Sultan Daniel. There was a feast of joy, and that nosegay of fortune was united to the daughter of Rai Mal the son of Rai Maldeo"

In the same manner the chroniclers allude the marriages of Akbar, and his sons Murad and Daniel, with Muslim princesses. They have not recorded the names of the princesses, whether she is a Hindu or Muslim.

"Naqib Khan (the renowned Sanskrit translator at Akbar's court) represented that Qazi Isa, his uncle had made his daughter a present to His Majesty....and..he visited the house of Naqib Khan and received that chaste lady according to ancestral rites"

"Excellent events which occurred during the siege of Mankot was that the fortunate-starred daughter of Mirza Abdullah Khan Mughal who was distinguished for his lineage, entered into the bond of matrimony with the unique jewel of the Caliphate"

"In the beginning of this auspicious year a daughter was born to Prince Sultan Salim. The daughter of Said Khan obtained this great blessing"

There is not the least possibility that Jahangir's mother's name was not recorded in Mughal records because she was a Hindu. It should be remembered that Akbar's chroniclers do not even mention the mothers of Akbar's other children too. Abul Fazl mentions the death of Daniel's mother, that in 1596, 'the great lady of the family of chastity, the mother of Prince Sultan Daniel died'. Abul Fazl thus records the death of Mahi Begum, one of Akbar's daughters, "One of the occurrences was the departure of Mahi Begum to the spiritual world. That nursling of the rose-garden of the Caliphate was the grand-child of Rawal Harraj the ruler of Jaisalmer (Nathi Bai)". In Price's version of Jahangirnama [fabricated copy], we can read the list of Akbar's children (except Jahangir) and their mothers.

Who was the Rajput Wife of Akbar

No doubt, the 'mysterious' Wali Nimat Begum entitled 'Maryam Zamani', Jahangir's mother, was a powerful lady in the Mughal court, and according to European travelers, was very active in trading operations in the Red Sea. (In 1613, the Portuguese seized the largest of the Surat vessels named Rahimi, which belonged to her. This fact alone confirms that she was not a Portuguese woman as claimed by some authors). She had the knowledge of Persian language. She built the Begum Shahi Mosque at Lahore and a Baoli at Bayana. In my opinion she was a Musalman lady. 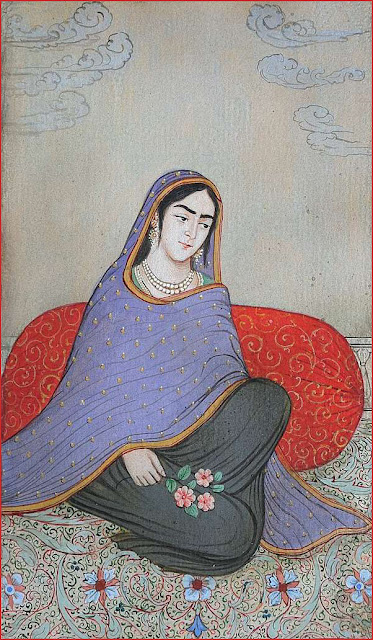