Posted onJuly 06, 2018
Muiz-ud-din Qaiqabad (1286-1290), the grandson of Balban, was the tenth king of the early Turkish empire of India, popularly known as the Slave dynasty. Balban's eldest son Muhammad the Martyr Prince, had died in his father's life time, and Bughra Khan, his second son, had no desire in the throne of Delhi. So Balban declared his eldest grandson and son of Muhammad, Kai Khusrau his successor however, the chiefs and nobles placed Qaiqabad, son of Bughra Khan, to the throne.

Qaiqabad was 17 or 18 years old when he ascended the throne. He had been brought up and educated under the strict eye of his grandfather Balban. His strict tutors had never given him the chance of enjoying any pleasure; neither beautiful girls, nor wine. When Qaiqabad was suddenly freed from all control, he plunged at once into amusements and pleasures. He built a splendid palace at Kilokhari (on the banks of Yamuna), and made it his capital. He neglected government affairs and devoted himself to the company of women, singers, musicians and buffoons.

Nizam-ud-din, nephew and son-in-law of Malik Fukhr-ud-din Kotwal, was made deputy, and acquired great influence over the Sultan that the affairs of the government were entrusted in his hands. Nizam-ud-din, who was very ambitious and crafty; began to form schemes to usurp the throne. His first act was to get rid of the Prince Kai Khusrau. He poisoned the ears of the Sultan, "Kai Khusrau is adorned with many princely qualities. The nobles are very friendly towards him, and look upon him as the heir-apparent of Sultan Balban. One day they will set you aside and raise him to the throne". Nizam-ud-din thus obtained an order for the murder of the innocent prince. The Sultan sent an order to Multan to summon the prince and Nizam-ud-din dispatched his emissaries, who murdered the prince at Rohtak. Nizam-ud-din next resolved upon removing the chief nobles, the Mongols converted Musalmans. 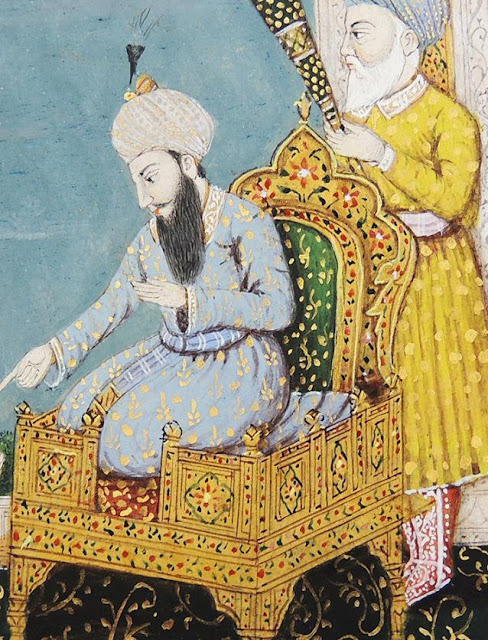 Mongol Invasion: At that time news reached that the Mongols led by Itimar (Tamar) had invaded Lahore. The Sultan sent the Khan Jahan Shahik Barbak with an army against them. Most of the Mongols were slain, and a large number of them were taken captive. Qaiqabad had enlisted a great number of Mongol soldiers in his service. Nizam-ud-din insinuated the Sultan that the Mongol nobles are all of one race and they had many followers. If they united together and acted treacherously, they will seize upon the kingdom. Qaiqabad, listened to all those villainous intimations and treacherously slaughtered majority the Mongol chiefs, others were expelled. He also imprisoned the nobles and maliks who had friendly relations with them. Thus Qaiqabad had become a puppet in the hands of his wicked minister. Whenever any of his well-wishers hinted about the machinations of the minister, the Sultan immediately called for the minister, and repeated it to him, "So and so has spoken this about you", and had seized that person and made over to him.

Meeting of the Father and Son: After the death of Balban, Bughra Khan (also called Kurra Khan) had proclaimed himself the king of Bengal under the title of Nasir-ud-din. When he came to know about the state of affairs at Delhi, he wrote a letter to his son warning him against pleasures as well as the designs of Nizam-ud-din, but Qaiqabad paid no attention to this. (Bughra Khan himself had not paid any attention to the advices of his father Balban) Bughra Khan now considered it necessary to march to Delhi to meet his son. Hearing this news, Qaiqabad advanced with a force to Oudh to oppose him, and the two armies lay encamped on opposite sides of the river Sarayu (also known as Ghaghra). Bughra Khan, finding his army much inferior to that of his son, opened a negotiation. He wrote a letter to his son requesting an interview and it was granted. Qiran-us-Sadain (Conjunction of two Auspicious Stars) written by Amir Khusru gives an account of the historic meeting of Bughra Khan and Qaiqabad on the banks of the river Sarayu. At the time of bidding farewell, Bughra Khan advised his son to remove Nizam-ud-din as soon as possible. (It is rare in history that when the father was still alive, his son has ascended the throne.)

Murder of Nizam-ud-din: After the meeting, Qaiqabad set out for Delhi. For a few days, he remembered his father's advise, yet from time to time, his heart slipped away from his hand. Moreover, the activities of Nizam-ud-din led him back to his pleasures. In short, the Sultan continued in this course of pleasure, till wine and venery had ruined his health. A few months after reaching Delhi, he fell sick, and then began to recollect the advices of his father. He now believed Nizam-ud-din to be the real cause of all his distress and made plans to rid himself of the minister. He directed him to take charge of Multan. But Nizam-ud-din, who was aware of the Sultan's intentions, kept making excuses for delaying his departure. Some of the Sultan's attendants, as soon as they became aware of the Sultan's intentions, removed him by giving poison.

After the murder of Nizam-ud-din, Malik Jalal-ud-din Firoz, the governor of Samana, was made the Aariz-ul-Mumalik with the title of Shaista Khan, and assigned the fief of Baran to him. Malik Aitamur Kachhan was made Barbak and Malik Aitamur Surkha the Vakildar. In the meantime, the Sultan became Paralytic (he lost the use of one side, and had his mouth distorted) and was confined to his bed. These three officers now divided the government among them. The old Balbani nobles wanted to preserve the throne to the family of Balban; they placed Qaiqabad's three-year old son Shams-ud-din Kaimurs on the throne.

Malik Aitamur Kachhan and Malik Aitamur Surkha decided to get rid of the nobles who were not Turks, and Jalal-ud-din was the first in this list. When Jalal-ud-din came to know about the intention of Aitamur Kachhan and Surkha, he assembled all the Khiljis and prepared an army at Baharpur. Aitamur Kachhan proceeded to Baharpur to induce Jalal-ud-din by false pretenses to come to Delhi, and there assassinate him. But Jalal-ud-din, who had obtained information of this, murdered Kachhan at the door of his tent. The sons of Jalal-ud-din then seized the young prince Kaimurs and carried him off, together with the sons of Malik Fukhr-ud-din Kotwal, to Baharpur. They killed Malik Aitamur Surkha, who was pursuing them. When this exploit became known in the city, the people of Delhi, assembled before the city and determined to attack Jalal-ud-din. But Malik Fukhr-ud-din Kotwal turned them away in order to save the young prince as well as his own sons, who were in the custody of Jalal-ud-din. Jalal-ud-din, who had now became more powerful, sent a malik, whose father had been unjustly put to death by Qaiqabad, to Kilokhari, to murder the Sultan.

Death of Muiz-ud-din Qaiqabad: Qaiqabad was lying sick in the palace at Kilokhari, who had only a little life left in his body. The assassin beat out his brains with bludgeons, rolled him up in the bed-sheet, and threw him out of the window into the river. This is the sad story of the last king of the Slave dynasty. Qaiqabad's wife was the daughter of Malik Jhaju, brother's son of Balban. Kaimurs was his only son.


Tarikh-i-Mubarak Shahi however, gives a somewhat different account: The author Yahya says that Qaiqabad was made a prisoner by Jalal-ud-din. Dying out of thirst and hunger the Sultan wrote the following lines:

"The horse of my excellence is standing on the plain.
The hand of my generosity is under an anvil.
My eyes that never beheld less than gold mines and jewels
Come and see, how much is it perplexed today! "

Ibn Battuta says that when Qaiqabad was affected with Paralysis, Jalal-ud-din revolted against him. Qaiqabad sent out amirs to attack him, but they all, one after another, joined Jalal-ud-din. Jalal-ud-din afterwards entered the city and besieged the Sultan in his palace for three days. The Sultan suffered from hunger in those days that he could not find anything to eat. One of his neighbors sent him some food, but Jalal-ud-din forced his way into the palace and Qaiqabad was killed.

Usurpation of Delhi Sultanate by Jalal-ud-din Firoz Khilji: After the murder of Qaiqabad, Jalal-ud-din Firoz ascended the throne of Delhi (at the age of seventy) and established the Khilji dynasty. Thus ended the dynasty of Muhammad Ghori. Sometime after his accession to the throne, he put to death the infant prince Kaimurs.

Do you know? Masud, Kaykhusraw and Kayqubad were Seljuq Sultans of Rum. Kai Khosro, Kai Kobad and Keyumars were Persian kings of the heroic age, mentioned in the Shahnama of Firdausi.
Share
Post a Comment
Labels#Delhi Sultans
Newer
Older