Qiran us-Sa'dain, the Historic Meeting of Sultan Qaiqabad and His Father

Posted onJuly 14, 2018
Bughra Khan was the second son of Ghias-ud-din Balban. After the death of his eldest son Prince Muhammad, Balban made Bughra Khan his successor, but he had no desire in the throne of Delhi. In his life time, Balban had made him the governor of Bengal. Since Bughra Khan rejected the throne, Balban declared his grandson Prince Kai Khusrau his successor. However, after Balban's death, the nobles placed Bughra Khan's son Muiz-ud-din Qaiqabad (1286-1290) on the throne. Qaiqabad was a weak and pleasure loving king, who entrusted all the government affairs in the hands of his minister Nizam-ud-din, and devoted his life to wine, women, music and other pleasures. The treacherous minister was making plans to seize the throne. 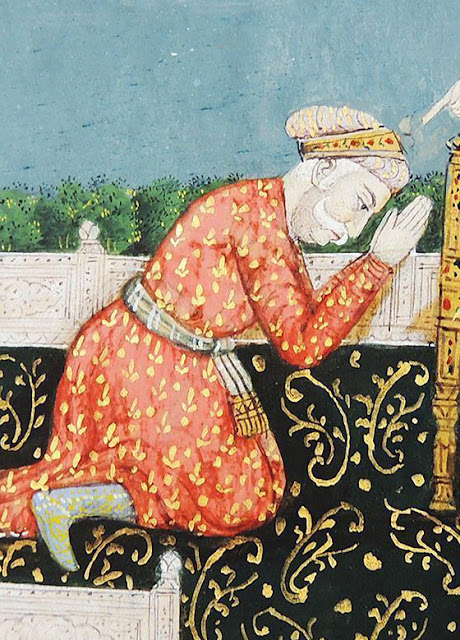 After the death of Balban, Bughra Khan had proclaimed himself Sultan under the title of Nasir-ud-din. When he heard the state of affairs at Delhi, he wrote to his son warning him of danger, but Qaiqabad paid no attention to it. When Bughra Khan learned that his advice had no effect, he determined to visit his son, and wrote a letter to him announcing his intention, "The desire to see you has deprived me of all strength; do not let me suffer the pangs of separation any longer; and allow me to have a sight of you". When Sultan Qaiqabad read his father's affectionate letter, his love was revived, and it was settled that the father and son should meet at Oudh. The minister Nizam-ud-din attempted all in his power to prevent this interview, but did not succeed. When the Sultan was about to meet his father alone, the minister advised him to proceed with his army in all state and grandeur. He said that "it was inexpedient for a king to travel such a long distance alone. In matter of state, no deference should be shown to the relation of father and son. Old writers had said that in pursuit of dominion fathers will slay their sons, and sons their fathers. Ambition for rule stifles both paternal and filial affection. The Sultan's father had struck coins and caused the khutba to be read in his name, besides, he was the rightful heir to the kingdom, and who could foresee what would happen at the interview. So the Sultan should march with all pomp, and a well-equipped army; so that all the Rays and Rajas might be impressed with fear and awe at the sight of the splendour and grandeur of the king; and might behave with humility and obedience". 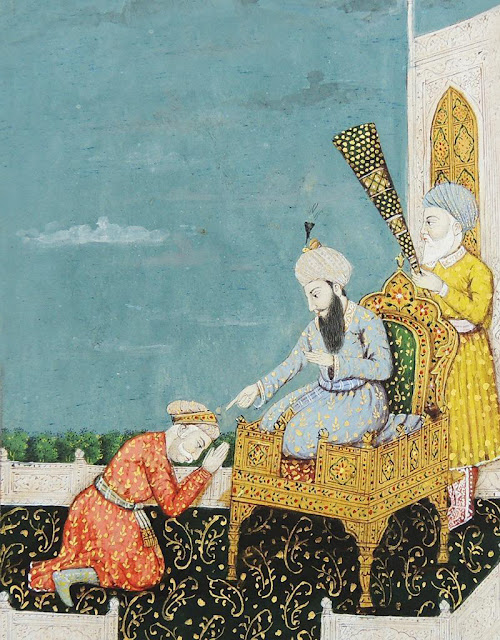 According to the minister's advice, Qaiqabad set out for Oudh with his army. When Bughra Khan heard this, he understood that Nizam-ud-din had instilled fear into the heart of his son. He also set out from Lakhnauti, with troops and elephants. The two armies encamped on the opposite banks of the river Sarayu. Bughra Khan sent his youngest son Kai Kaus with presents; in return Qaiqabad sent his son Kaimurs with gifts for his father. After much correspondence it was settled that the son should sit on the throne and the father, standing below the throne, should pay homage to him. The father said, "I have no inclination to pay homage to my own son (If my son ascends the throne it is an honour to me); but he sits upon the throne of Delhi in my father's seat, and that exceeds in grandeur all the thrones of the earth. If I do not show it due honour, its glory will be shattered, and evil will come both upon me and my son". On his approach to the throne, Bughra Khan bowed his head, and three times kissed the ground. The officer of the gold stick cried out, "Bughra Khan comes to humble himself before the king of the universe...". Qaiqabad could no longer bear the degradation of his father; he descended from the throne and fell at his father's feet. Father and son burst into tears and embraced each other. He then placed his son on the throne. But when he was about to stand in front of it, the son came down again, took his father's hand, seated him upon the throne, and himself sat down respectfully in front of him. He then ordered a salver full of gold coin to be waved three times over his father's head. After a long time Bughra Khan returned to his camp; they continued to visit each other for several successive days, and exchanged priceless gifts.

Bughra Khan's Advice to His Son: Remember Balban's advice to his son Muhammad:

On the day of bidding farewell, Bughra Khan called his son, the minister and his deputy, and gave them advice as to their future conduct in the government. He also warned his son against excess in wine and venery, then spoke of his carelessness with regard to state matters. He rebuked him for killing his brother Kai Khusrau and the other noted amirs and maliks of Balban. When the day of farewell approached, Bughra Khan said to his son, "Jamshid said that a king who does not keep so much money in his treasury that he may help his soldiers on the day of the onset of his enemies, and may come to the rescue of his subjects in times of calamity and famine, such a king does not deserve to be called a king of men". Qaiqabad said that as he had no benefactor or sympathizer, who would waken him from the sleep of carelessness, the king should make him acquainted with whatever might be right and proper; so that he might make it the guide of his conduct and might not allow it to be transgressed in any way.

Bughra Khan said, "I have endured the troubles of this long journey with the one object of making your ears of wisdom heavy with the pearls of advice; of wakening you from the sleep of inattention which was incidental to youth and power and the desire for pleasure; and of doing everything that was required of the love and affection of a father". The father continued, "Oh son! when I heard that you had ascended the throne of Delhi, I became extremely pleased. 1 knew that I had the territory of Lakhnauti already; now I had acquired the territory of Delhi also. Now it is two years, however, that I have heard stories of your pleasures and dissipation, of your neglect and inattention; and I am astonished that you are still safe. From that date, I have mourned for you and for myself; and I have seen the kingdoms of Delhi and Lakhnauti in the embrace of destruction; and have emptied my heart of all hopes of them; and specially from that day, when I heard that you had ordered my father's servants, who were your sincere well-wishers, to be slain. Because you had ordered them to be slain, others have lost all confidence in you. I have no hope, no expectation, now in the stability of the empire. Bethink you of this, my son! that my elder brother, who was fit to adorn a throne, became a martyr in my father's lifetime. His son who was fit to be a king, and who was your strength and support, you had destroyed him at the instigation of those who wished you ill; so that they might do away with you; and the empire of Delhi might pass into the grasp of a strange family and tribe. They would not leave our names, and no vestige of us, on the face of the earth: If you have no pity, oh son! on yourself, have pity on your family and offspring. Don't destroy yourself in sport, and take pity on your own condition, and attend to these few words of advice of mine."

"Take pity on your own life and attend to the reformation of your nature. The colour of your cheeks was fresh and red like the rose and the ruby; it has become yellower than turmeric! Restrain yourself from the lasciviousness which has made you weak and emaciated, and do not hanker after it; for when life itself is in danger, no one can enjoy any pleasure."

"You should refrain from slaying the amirs and maliks; so that the confidence which the ministers and officials have in you may not be impaired. Nizam-ud-din and Qawam-ud-din are ministers of mature understanding and experience. You should select another man like these from among the amirs; and should associate yourself with these three; and consider each one of these one of the pillars of your greatness. You should transact every business which will come up with the consent and advice of these. Allow them to have equal access to you. Do not give any of them so much power that it may bear fruit in insubordination and revolt. Every secret of state which you may have to reveal, you should disclose in the presence of all the three. Do not place so much confidence in any one of them, that the others may be disheartened."

After saying all this, he burst out weeping and sobbing. He then embraced his son and whispered in his ear, to rid himself of Nizam-ud-din as soon as he can, "for if he gets an opportunity, he will not let you live one day". After this, they both parted in tears, and returned to their respective capitals. Bughra Khan, who was much affected, said to his confidants, "Today I have said my last farewell to my son and to the kingdom of Delhi, for I know well that neither my son nor the throne of Delhi will long exist......"

Qiran us-Sa'dain (Meeting of the Two Auspicious Stars) was the first historical masnavi of Amir Khusro, which is the history of the meeting of Sultan Qaiqabad and his father Sultan Nasir-ud-din (Bughra Khan). Qaiqabad commissioned him to write in verse the meeting of the two kings. Amir Khusro, in this poem, states that when the news of Sultan Qaiqabad's accession to the throne reached Bughra Khan, he marched to Delhi to conquer it. On receiving this intelligence, Qaiqabad marched to Oudh for opposing his father. Yahya, Ibn Battuta and Ferishta agrees with Amir Khusro. According to Amir Khusro, it was at Oudh that matters were peaceably arranged.

We know that Balban had offered the throne to Bughra Khan, who rejected it and returned to Bengal. So there is no reason for him to be hostile towards his son. The conclusion is this: Barani's account of the meeting is more trustworthy than that of Amir Khusro, who was an eye-witness. (Qiran us-Sa'dain of Amir Khusro by Banarsi Prasad Saksena). This event happened in the year 1288.