Qutb Minar is a Muslim Monument of India

Posted onSeptember 23, 2018
The Qutb Minar of Delhi is a subject of controversy. Some Indians argue that it is a Hindu monument; that this monument was originally begun by the Hindu king Prithviraj Chauhan for giving his daughter a view of the river Yamuna; or, according to another account, for getting the view of the river Ganges. J. D. Beglar and Syed Ahmad Khan were the notable historians to support this claim. 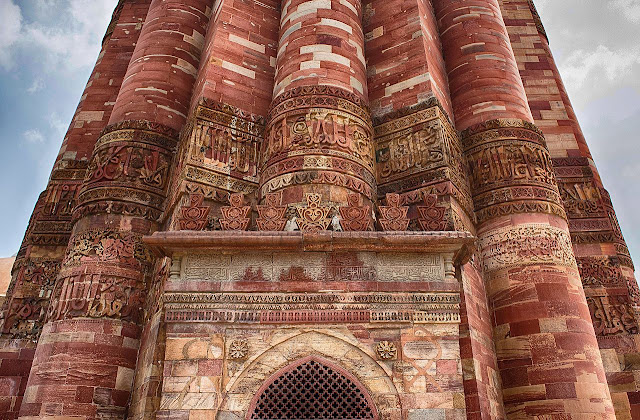 
Arguments Supporting the Hindu Origin of Qutb Minar and Its Objections:

A Masjid should have two Minars:

Peculiar slope of the Minar:

The peculiar slope of the Qutb Minar is totally unlike that of other Muslim Minars - Slope is peculiar characteristic of the architecture of the Pathans.

Wrong position as the Mazina:

The Mazina would have been erected at one end of the Mosque, instead of being at some distance from it - The Koel Minar, which occupies exactly the same detached position with regard to the Jama Masjid of Koel as the Qutb Minar does with respect to the Jami Masjid of Delhi. Both of them are placed outside the south-east corner of their respective Masjids.

The entrance door should face the east:

Muhammadans always erect their buildings upon a raised platform, as may be seen in the unfinished Minar of Ala-ud-din Khilji, and it is customary for the Hindus to commence such buildings without any platform (or plinth) -  The gigantic Buddhist temple at Bodh Gaya, the two large temples in the fort of Gwalior, the elaborately sculptured temples of Khajuraho, the great pillar at Chittorgarh and most of the temples in Kashmir all are raised on plinths. The Minars at Ghazni and the tomb of Iltutmish were not built on plinths. 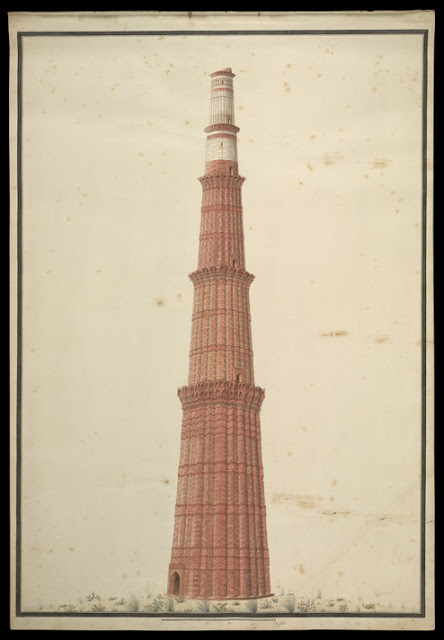 Bells which are used in Hindu worship are sculptured on the lower part of the basement storey - Hindu motifs like the bells, chains or lotuses exist because materials from the adjacent Hindu temples were used in the construction of the Minar, and also because Hindu labourers were employed. Moreover, there are no other Pillars of Hindu origin except the Pillar of Chittorgarh, even that has no similarity with the Qutb.

Why it is called Qutb Minar?

There are two popular legends regarding it's name: Some people say it is named after Qutub-ud-din Aibak; some others say it is named after Khwaja Qutbuddin Bakhtiar Kaki a 13th-century sufi saint. However, in contemporary Persian records, it is mentioned as the Minar of the Jami Mosque of Delhi, now known as the Quwwat-ul-Islam Mosque. Muhammad Shafi Warid, who wrote his Mirat-i Waridat in 1734, calls it Minar-i-Shamsi ie, the minar of Iltutmish.

The name 'Cuttub Minar' was first used by Ensign James Blunt, an engineer, in 1794 (Asiatic Researches). Blunt was followed by the British Painter Thomas Daniell. Thomas Daniell made a painting of the Minar in 1799 with the title "Cuttub Minar" for his 'Antiquities Of India'. We thus conclude that it was the British who named this minar "Qutb".

There are many Arabic and Nagari inscriptions on the Minar; the names of Hindu masons and carpenters occur in the inscriptions in addition to Fazl, son of Abul Maali the Mutawalli (Manager) and Muhammad Amir Koh the supervisor. We can conclude that though the Sultans ordered to build the Minar, the artisans were chiefly Hindus.

On the second storey of the Qutb Minar, there is a verse from the Koran regarding the call to prayer, "O! true believers, when ye were called to prayer on the Day of Assembly, hasten to the commemoration of God and leave merchandising....The reward of God is better than any sport or merchandise, and God is the best provider". This alone proves that the Qutb Minar was the Mazina of the Quwwat-ul-Islam mosque, though its lower gallery was used for that purpose [James Fergusson]. Abul Fida calls the Minar as the Mazinah of the Jama Masjid of Delhi. It was also a Tower of Glory. To learn more, here are the descriptions of the Minar given by Amir Khusru and Muhammad Aufi:

Description by Amir Khusru in his Qiran us-Sa'dain: "The muezzin (public-crier) stretched and extended his figure..shouted the prayer-call by standing on the pillar...When the muezzin went round the top of the shaft, his stature went beyond the height of the mosque of Christ...The post where the crier's place rests, was beyond the reach of the crier's stature".

Description by Muhammad Aufi in his Jawami ul-Hikayat: "Praise be to God that through His grace Shamshuduniya wa din Abul Muzaffar as-Sultan Iltutmish...in the imperial metropolis of Delhi, constructed a mosque which is like the monastic establishment of the holy inmates of the world above and also a lofty minaret, which is higher than the vault of heaven..the whole of the courtyard and the flooring of the mosque is made of white marble and the arches also have been constructed of stone in such a manner as to baffle the imagination..and by its side, he constructed the Minar, the loftiness of which beggars description. You might say that a lofty cypress has grown in the flower garden (reminding the Quranic text). Verily all mosques are meant for God..The elegant edifice of the mosque is an abode of all the pious and devout ones and the tower constructed in it is like a cypress tree, from the top of which sweet-toned nightingales of the prayer call sing from dawn the hymns of the glory of God...the tower has a lofty stature but is devoid of hand and feet. It is of high dignity and lofty stature for it is constantly engaged in the work of providing the call of prayers of God's creatures.


As the triumphing judgment of the Sultan suggested due to his good faith in the principles of Islam that the sound of the prayer-call should reach the ears of all creatures, he fixed the size and the lofty height of the monument and consequently the wise engineers, in accordance with the royal command, constructed a Minar which was so to say, an Alif written on the tablet of the courtyard of the mosque and the arches of the mosque were given a curved shape like that of a 'Noon' and thus they are like 'Alif' and 'Noon' respectively, indicating aan (dignity). Verses: Who else possesses the beauty that belongs to you? Let the evil eye be at a distance from whatever you possess. I wounder how the great traditional saying of the Prophet emanate from the mouth that you possess, ie, how the call for the prayer, Allah-o-Akbar comes out from your tongueless mouth and how it reaches the ears of so many creatures. You might say that the Minar has got the attributes of the Mustaqiman (the righteous ones standing erect in prayer) who when they hear the recollection of their friend (God) their hearts warm up as the Quran says that whenever the names, attributes and praises of God are repeated, the heart begins to beat. The Minar may be likened to a brook or rivulet which is continuously flowing into the water of the benevolence of God's names and attributes and the Canon law of Mustafa receives the water of face-lustre therefrom. It has been constructed with the help and the patronage of and due to the exalted magnanimity of the King of the world, the Khusrau of the age, world taker and the law-giver till eternity. Five times every night and day, it plays the musical band at the palace of the Divine (Sultan). The planet of Saturn on the 7th tier of the blue sky keeps guard at its door like a slave (Hindu). The minaret like a living creature is sitting in the presence of that King because it has the honour of performing his orders. it has been rewarded with rich robes.

1. The Qutb Minar from Contemporary and Near Contemporary Sources By Ved Parkash- Proceedings of the Indian History Congress Vol. 26, PART II (1964)

3. Carr Stephen - The Archaeology and Monumental Remains of Delhi

4. J. A. Page - Memoirs of the Archaeological Survey of India - No. 22. An Historical Memoir on the Qutb: Delhi

5. The History of the Kutb Minar (Delhi) Being an Inquiry Into Its Origin, Its Author-Ship, Its Appelation and the Motives That Led to Its Erection By Rustamji Nasarvanji Munshi

8. Delhi Past and Present By H. C. Fanshawe

10. A Description of the Cuttub Minar By Ensign James T. Blunt, of the Engineers - The Asiatic Researches; or, Transactions of the Society Instituted in Bengal, Vol IV (1799)

12. M. C. Joshi - Some Nagari Inscriptions on the Qutb Minar - Proceedings of the Seminar on Medieval Inscriptions, 6-8th Feb. 1970

13. An Account of the Inscriptions on the Cootub Minar, and on the Ruins in Its Vicinity By Walter Ewer - Asiatick Researches Vol. 14 (1822)

14. History of Indian and Eastern Architecture Volume 2 By James Fergusson

When Ibn Battuta saw the Minar in 1334, it had four storeys and a marble dome. He says that he was in contact with a localite who had seen its construction employing elephants. But, the most interesting point is that according to Battuta the Minar was built by Muiz-ud-din Qaiqabad (1286-1290), the grandson of Balban. He or the informant has confused Muiz-ud-din Qaiqabad with Muiz-ud-din Muhammad Bin Sam otherwise known as Muhammad Ghori.

Babur wrongly ascribes the Minar of Delhi to Ala-ud-din Khilji. Was he meant the unfinished Alai Minar?


"The base of the Qutb Minar is a polygon of twenty-seven sides [it is 24 sides only], and rises upon it in a circular form...The exterior part of the Minar is fluted into twenty-seven semicircular and angular divisions, upon which is written a good deal of a very ancient Arabic character, it is supposed to contain passages from the Quran; there are four balconys in the height of the building, the first is at the height of 90 feet, the second at 140, the third at 180, and the fourth at 203 feet; to the height of 180 feet, the pillar is built of an exceeding fine red Granite, and the fluting there ends. The balconys are supported upon large stone brackets, and have had small battlements erected upon them; from the height of 203 feet, excepting a few inconsiderable ornaments, it rises with an even surface, and circular form, built of very fine white marble. An irregular spiral stair-case, leads from the bottom, to the summit of the Minar, which is crowned with a majestic Cupola of red Granite; there are many openings during the ascent, for the admission of light and air; at each balcony, an opening to allow of people walking into them; but I found the battlements in many parts entirely ruined. The entire height of the Minar is 242 feet and six inches."

"In its mosque there is a minaret the like of which is not found in the world; it is built of red stones and has about three hundred stairs. It has extensive dimentions, is very high and has spacious lower parts. Its height is about that of the minaret of Alexandria", Taqwīm al-buldān (Abū al-Fidā).

"There is also the Jama mosque the call minaret of which is famous for its height. It is said that it has no rival in height on the earth. According to Shaikh Burhanuddin bin Khallal al-Bizi, the height of the minar is about twelve hundred feet", Masalik al-Absar (Shihab al-Din al-Umari).
Share
2 comments
Labels#Delhi Sultans, #Monuments
Newer
Older