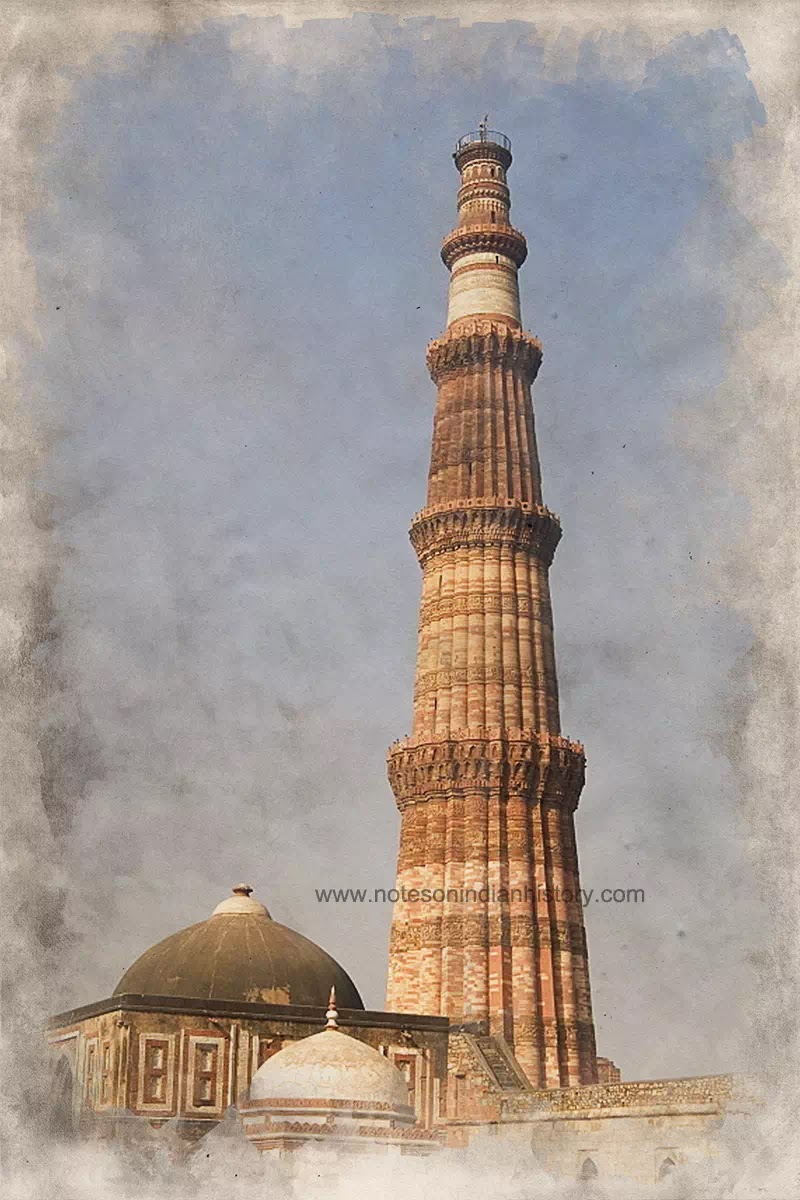 1. [Basement] On yellowish quartzite, 1st face on the right side of the main entrance:
"Samat 1256" (AD 1199)
2. [Basement] On yellowish quartzite, left jamb of main entrance door, 4th course:
"Samat 1256" (AD 1199)
3. [Basement] On underside of lowest overlapping arch stone in entrance passage:
"Samat 1256" (AD 1199)
AD 1199 appears thrice in the basement of the Minar. This date could not have been inscribed anywhere else, least in a Hindu structure, as Delhi remained under Muslim occupation since 1192. This alone proves that the basement was built during the Muslim rule. AD 1199 is either the date of commencement of the first storey or the completion of the first storey.
4. [Basement] On right jamb of main entrance door, 8th course:
"Stambho" (The Pillar)
5. [Basement] On the south face of the plinth:
"...Ma gaj 51 1/2 — 83 1/4 daranamuni"
[This could be a mark of the Hindu master-mason]
6. [Basement] On left jamb of main entrance door, 9th course:
"pirthinirapah"
"The King Pirthi"
It may indicate who was Lord of the Earth, being a native version of Sultan-al-Alam.
7. [Basement] On left jamb of the 5th slit window up stair-way:
"Malikdin-ki-kirti-stambha"
"Svasti Bhavatu"
"Malakdin" "Malakdin"
(This pillar of fame of Malikdina. May it be for well-being; Malakadina. Malakadina)
8. [Basement] On right jamb of the 5th slit window up stair-way:
"Chunilal fixed this screen in Samvat 1832 (AD 1775). Chunilal, dated....."
9. [2nd storey] On right abutment of door, near iron fixing:
"Written by Visnu Kantha on the 2nd day of the bright fortnight of Chaitra in the year Samvat 1560 (AD 1503)"
In AD 1503, the ruler was Sikandar Lodi (reign: 1489-1517). We can find Arabic inscription also mentioning Sikandar Lodi's repair on the Minar.
10. [2nd storey] On the white granite slab on top of the first storey:
"In the Samat year 1704 (AD 1648) on the 9th day of the dark fortnight of the month Maha (Magha). Tulsi and Hira Devidas....Madholal....Badrgu....the stone-cutters of the chandalavamsa...Ram. 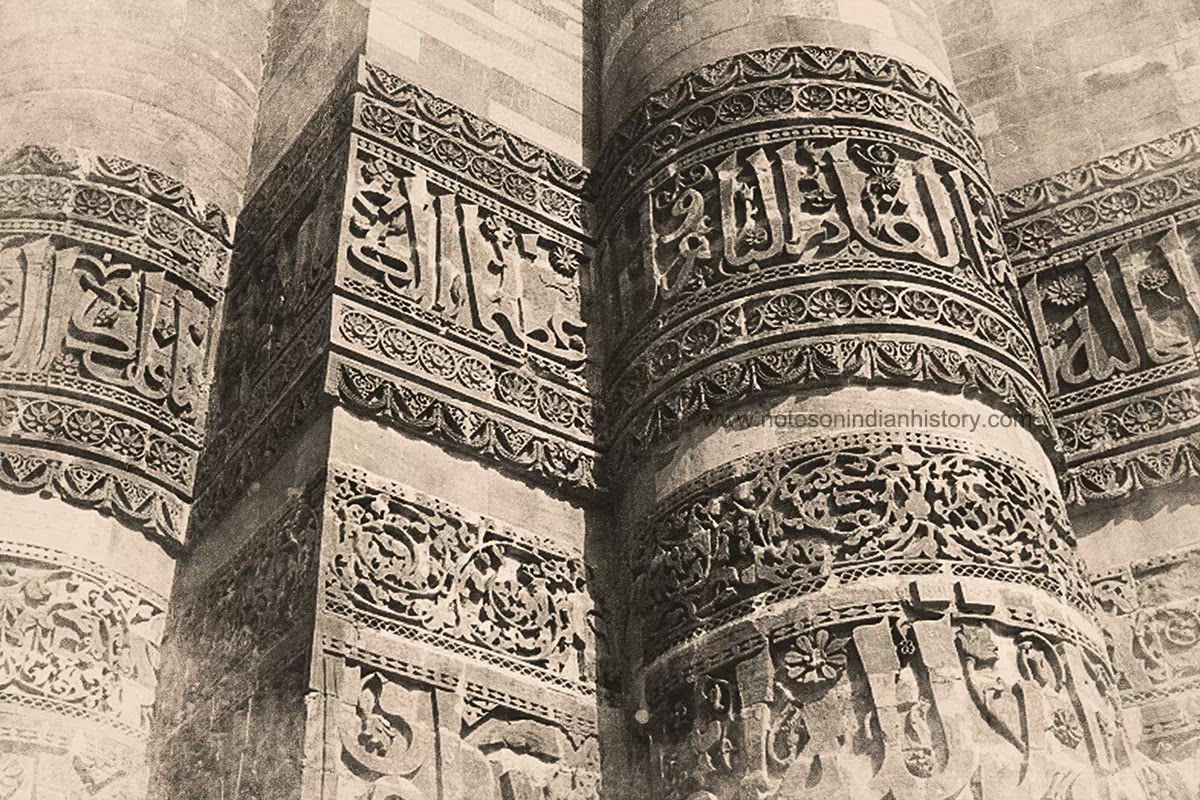 15. [4th storey] On left abutment of door:
"Sri Sultrāna Alavadin Vijayastambha"
(The Victory Pillar of the glorious monarch Ala-ud-din [Khilji])
In fact Ala-ud-din's victory pillar is the Alai Minar [which is still incomplete]. It is interesting to note that Babur also mentions Minar-i-Jami as the minaret of Ala-ud-din Khilji.
16. [4th storey] On the right side of the door, 4th course:
"Nana, Salha, Lola" (Name of masons)
17. [4th storey] On the right side of the door, 8th course:
"Samat 1425 varshe Phalgun vadi 15 gurudine Pherojsahi ke raji biju padi. Vahudi usrayo. Sutra Nana Salha Lola Lashmana...Samat 1425"
"On Thursday, the 15th day of the dark fortnight of Phalguna in the year Samvat 1425 (AD 1368) lightning fell during the reign of Firoz Shah (Firoz Shah Tughlaq, 1351-1388). The Vahudi? [monument] was then repaired in the year Samvat 1425. The masons were Nana, Salha, Lola and Lashmana.
We can find an Arabic inscription also mentioning Firoz Shah Tughlaq's repairs on the Minar.
18. [4th storey] On the right hand side of door, 8th course:
"Muhammad Sultrāna ki rāji Bhādava māsi biju padi sātami-dine ghatika 25 janakamatrah Samvat 1382 Varshe"
"In the reign of Muhammad Sultan (Muhammad Tughlaq, 1325-1350) on the 7th day of the (month) Bhadava in the year Samvat 1382 (AD 1326) in the 25th ghari in the Janaka-matra, lightning struck on the Monument".
19. [4th storey] On right abutment of door:
"Оm Samat 1389 varshe Chaitra-sudi 11 Budha-dine Sri Sultrāna Mahammadsahi ki Kirti"
Om. On Wednesday, the 11th of the bright fortnight of Chaitra in the year Samvat 1389 (AD 1332), the fame of the illustrious Sultan Muhammad Shah [Muhammad Tughlaq, 1325-1350]"
It seems that the purpose of this inscription was to record the establishment of Sultan Muhammad Tughlaq's fame through some noble deed which probably involved repairing a portion of the Minar, damaged by lightning during AD 1326.
20. [4th storey] On the fifth course above the floor of the balcony:
"Mason Lashmana (and) Harimani Gaveri, son of Sahadhair"
21. [5th storey] On the marble soffit of arch over doorway:
"On the 8th day of the bright fortnight of Bhadra in the year Samvat 1560 (AD 1503)"
In AD 1503, the ruler was Sikandar Lodi. We can also find Arabic inscription mentioning Sikandar Lodi's repair of the Minar.

22. [5th storey] On left hand marble abutment of the door:
"Om svasti Sri Sultrāna Pherojsahi vijayaraje Samvat 1426 varshe Phalguna sudi 5 Sukra dine Munaro jirnodhara Krit Sri Visvakarma prasade rachitah Sutradhari Chahada-Devapalasuta-dohitra sutrapatah pratishtha nipati...silpi sūtra Nānā Salhā darukarmma Dharmu-Vanāni"
"Om. In the auspicious reign of the illustrious Firoz Shah Sultan (Firoz Shah Tughlaq, 1351-1388) on Friday the 5th day of the bright fortnight of Phalguna in the Samvat year 1426 (AD 1368), the minar was renovated. The work was completed by the grace of Sri Visvakarma. The architect was Chahada, son of Devapala, and the maternal grandson of....; The measuring cord was drawn. Height 92 yards, 22 Yards, 3 yards, 26 yards, Height 131 yards, 134 yards. The craftsmen were the architects Nana (and) Salha and the carpenter Dharmu Vanani".
We can also find Arabic inscription mentioning Firoz Shah Tughlaq's repairs on the Minar. The Hindu architects attribute the successful completion of their work to their own supreme deity, the Visvakarma [the Hindu god of construction].
Many inscriptions in Arabic and Nagari characters in different parts of the Minar reveal its history. We have already confirmed with the help of the Arabic inscriptions that the basement storey was built by Qutub-ud-din Aibak (r: 1206-1210) while he was the Viceroy of Delhi, for his suzerain Muhammad Ghori, and 2, 3 & 4 storeys were completed by Iltutmish (r: 1211-1236). Firoz Shah Tughlaq (r: 1351-1388) added the 5th storey and the cupola. Later in 1503 Sikandar Lodi (r: 1489-1517) also carried out some restoration in the cupola and also in the upper storeys (2nd & 5th storeys).
The  superintendents were Musalmans; Fazl, son of Abul Maali worked under Aibak, Muhammad Amir Koh under Iltutmish and Khanzadah Fath Khan, son of Masnad-i-Ali Khawas Khan worked under Sikandar Lodi. Architects and masons Nana, Salha, Lola, Lashmana, Hariman Gaveri, Chahada Devapala and Dharmu Vanani worked under Firoz Shah Tughlaq.
Nagari inscriptions also record the name of three Sultans, whose records are not found in Arabic inscriptions. They are Muhammad Tughlaq, Ala-ud-din Khilji and certain Malikdin. These inscriptions shows that the monument was not regarded as a mazina only, but also a tower of glory and tower of victory.
It should be remembered that during the time of Ala-ud-din and Muhammad Tughlaq there were only 4 storeys. These repairs were most probably conducted in the original 4th storey of the Minar constructed by Iltutmish. We have already seen the Nagari inscription praising Muhammad Tughlaq. 'Malikdin' and Ala-ud-din Khilji also might have done some minor repairs in the original 4th storey of Iltutmish, which was destroyed in the lightning during Firoz Tughlaq's reign. 'Malikdin' could be another name of Malik Qutub-ud-din as Pushpa Prasad suggest.
First time lightning struck the Minar during the reign of Muhammad Tughlaq in 1326 and was repaired by him in 1332. Lightning again damaged the 4th storey in 1368 during the reign of Muhammad's successor Firoz Shah. It seems that the upper portion of the 4th storey along with the marble cupola [Ibn Battuta had seen the topmost marble cupola during the reign of Muhammad Tuhglaq] were destroyed in that lightning. Firoz Shah repaired its upper portion using marble and red sandstone in irregular widths. He used marble in the newly built 5th storey also with occasional placements of red sandstone. A new cupola was also added by him. When James Blunt saw the Minar in 1794, its cupola was of red granite. This cupola was thrown down in 1803 in an earthquake.
The addition by Firoz Shah begins from the inside staircase at the beginning of the 4th storey. While the original interior casing of the Minar is of Delhi quartzite stone, Firoz Shah's repair is done with red sandstone.

Nagari inscriptions indicate that the architects responsible for the restoration of the Minar during Firoz Shah's period and for the construction of the 5th storey and cupola were Hindus. It also reveals the important role played by the Hindu engineers in the construction and repair activities of the Minar. Since the conquerors were soldiers, they were obliged to employ Hindu masons to carry out their designs.
The Nagari inscriptions must have been provided by the Hindu artisans to inform future generations silently that "we built this wonder". While the construction of the building was ordered by the Muslim Sultans, it was the Hindu's engineering skill that brought this magnificent engineering marvel into existence.
Note:
The only Nagari record of a date earlier than AD 1199 is one on the soffit of a window lintel, in a position which leaves no doubt that this particular stone came from some older structure. (Sir Wolseley Haig)

Under the soffit of lintel over 18th slit window, up stairway "थोगोविन्दपलो भोजपलो" (Srigovindapali Bhojapali). Its meaning is uncertain. On epigraphical grounds the inscription is assignable to about the 9th Century AD and is thus the earliest record noticed on the Minar.

"This inscription is on the underside of the lintel in an extremely difficult place to chisel and is on one stone. It seems to be incomplete, that is to say that the ends of the inscription are cut off owing to the ends of the lintel being set on the side jambs of the window. In my opinion the inscription was carved on the stone before it was set in its present position. (J. F. Blakiston)
This shows that stones from demolished Hindu structures were used in the construction of Qutb Minar also.
Reference:
J. A. Page - Memoirs of the Archaeological Survey of India - No. 22. An Historical Memoir on the Qutb: Delhi
M. C. Joshi - Some Nagari Inscriptions on the Qutb Minar - Proceedings of the Seminar on Medieval Inscriptions, 6-8th Feb. 1970
Daya Ram Sahni Rai Bahadur - Annual Progress Report of the Superintendent, Hindu and Buddhist Monuments, Northern Circle,. Archaeological Survey, for 1919
The World Heritage Complex of the Qutub By R. Balasubramaniam
Sanskrit inscriptions of Delhi Sultanate, 1191-1526 By Pushpa Prasad
The Manara in Indo-Muslim Architecture By A B M Husain
R Nath - Concept of the Qutub Minar - Islamic Culture Vol 49 (1975)
Share
Post a Comment
Labels#Delhi Sultans, #Monuments
Newer
Older