Posted onApril 20, 2020
Sher Afgan is famous in history as the first husband of the celebrated Mughal queen Nur Jahan. The death of Sher Afgan occurred in the year 1607. It was in 1611 that Jahangir marries his widow Nur Jahan. In this post we are discussing the early life of Sher Afgan and the circumstances which lead to his death.

Also Read: Was Jahangir Responsible for the Murder of Sher Afgan?


Ali Quli Beg Istajlu was a table-servant of Shah Ismael II of Persia. After the Shah's death, Ali Quli fled from Persia and came to Kandahar. In Multan, he met with Abdu-r-Rahim Khan Khanan, who was marching against Thatta. At the recommendation of the Khan Khanan he was enlisted in the imperial service [of Akbar]. During the conquest of Thatta, Ali Quli distinguished himself by his bravery and rendered valuable services. When Khan Khanan returned triumphant to Akbar at Lahore, Ali Quli, at his request, was honoured with some high rank. 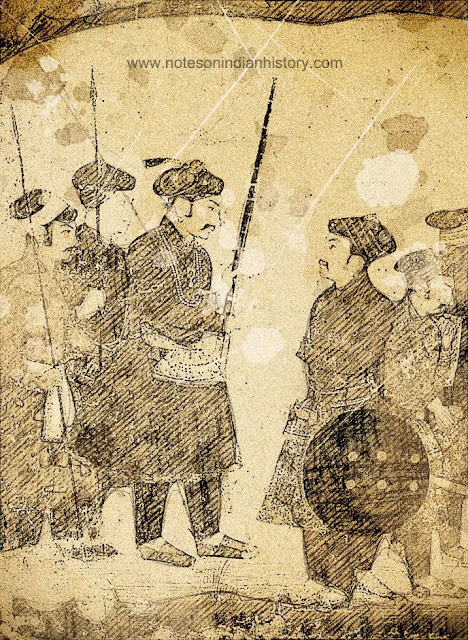 Ali Quli remained in Akbar's service for a long time. In 1599, Akbar gave Mihr-un-nissa Khanum [the future Nur Jahan], daughter of Mirza Ghias Beg (the future Itimad-ud-daula), who was then serving as Diwan-i-Bayutat, in marriage to him.

Ali Quli was appointed to accompany prince Salim, when the latter was deputed by Akbar to a campaign against the Rana of Mewar. He received from Salim the title of Sher Afgan (meaning: tiger-throwing), on account of his courage and bravery. Ali Quli followed Salim when he was in revolt, but soon left him and rejoined Akbar. But, on his accession, Jahangir pardoned Sher Afgan and granted him the jagir of Burdwan (now Bardhaman) in Bengal.

In the second year of his reign, Jahangir got news that Sher Afgan showed signs of rebellion by siding with the Afghan rebels in Bengal. Qutb-ud-din Khan Koka was sent to Burdwan, to bring Sher Afgan to court. While sending Qutb-ud-din, Jahangir gave him an order that if he found Sher Afgan loyal, he should be allowed to remain in his jagir, but if otherwise, he should be sent to court, and if he made any excuses in coming, he should be punished. Jahangir quotes in his Memoirs:

"From there I was informed that it was not proper to station the likes of such troublemakers in that province, so I ordered Qutb-ud-din Khan to send him to court. If he had any vain notions, he would pay the price. The khan knew him well enough, and as soon as the order arrived he took the men he had with him and set out at a gallop for Burdwan. No sooner was Ali Quli informed of Qutb-ud-din Khan's arrival than he went out by himself with two grooms to greet Qutb-ud-din Khan. After his arrival in the midst of the troop, the khan's men pulled him off his horse. Since Ali Quli's suspicions had been aroused by the manner of Qutb-ud-din Khan Koka's arrival, he said in order to catch him off guard, "What kind of leadership is this?" The khan had his men pull back, and he alone joined Ali Quli so that he could relate the contents of the order to him. Seizing the opportunity, Ali Quli immediately drew his sword and wounded him two or three times with it. Since Amba Khan Kashmiri (correct word is Aiba Khan) had a great affection and regard for the khan, he raced forward in loyalty and manliness and struck Ali Quli a hard blow to the head, but the vicious fellow stuck a poniard into Amba Khan, fatally wounding him. When the men saw Qutb-ud-din Khan in this situation, they fell on Ali Quli, chopped him to pieces, and dispatched him to hell. Amba Khan died right there, and Qutb-ud-din Khan Koka passed away to God's mercy in his own quarters four watches later". This event happened on 30 May, 1607.


*According to Riyaz-us-Salatin, When Qutb-ud-din reached Bengal, he was dissatisfied with Sher Afgan's action and conduct. Qutb-ud-din summoned Sher Afgan to him, but he made idle excuses. When this matter was reported to Jahangir, Qutb-ud-din was ordered to sent Sher Afgan to court immediately and carry out the instructions, which he had received at the time of his departure. Qutb-ud-din then instantly marched to Burdwan.

Here is the account of Sher Agan's death from Baharistan-i-Shahi:

"Aiba Khan, son of Abdal Khan, was one of the warriors of that land. On the eve of Jahangir's accession to the throne, he proceeded to his jagir at Burdwan under orders of the emperor. A brave man, Sher Afgan by name, was a former jagirdar now living in comfort at that place. Qutb-ud-din Khan, the governor of Bengal, had as a sequel to his disagreement with and jealously towards that gallant man, reported to the Emperor that all the people in Bengal except Sher Afgan have submitted to the authority of His Majesty. Whatever orders there were from His Majesty about him [Sher Afgan] would be carried out by him unhesitatingly. Forthwith orders were issued by the emperor that Sher Afgan's head be severed from his body and sent to the imperial court. On receiving these orders, Qutb-ud-din proceeded to confront that brave man along with a contingent of two thousand soldiers. In spite of suspecting danger to his life, Sher Afgan came out of his fort along with seventy or eighty horsemen to receive the governor formally. He had hardly come close to them when he understood the suspicious movement of Qutb-ud-din's troops and was convinced that their only intention was to kill him. Meanwhile the mahout of Qutb-ud-din maneuvered his exasperated elephant in such a manner that Sher Afgan's horse took fright and got out of control. Consequently Sher Afgan was forced to be on guard. He addressed Qutb-ud-din in these words: "You commander of the Khans, what do you mean by this move?" The aforesaid evaded a direct reply. Thereupon Sher Afgan's companions spoke to him reproachfully in the Turkish language: “If there is anything of manliness and bravery left in you, what other occasion would you seek to put these to test?” On hearing these words, the brave man mustered heroic strength and made an assault on Sher Afgan. But with the first stroke of his sword, Sher Afgan chopped off his arm from his shoulder. The next stroke pierced his belly letting his entrails drop down in a lump. Thus ended the life of Qutb-ud-din.

The next man who advanced to cross swords with him was Haidar Malik Chadura. He too sustained a wound in that battle and looked round to run for his life. Aiba Khan saw what was happening; he summoned his manliness and spurred his horse towards the pit. The two warriors came close to one another. On account of the presence of elephants on the battlefield, the horses of both the warriors found it rather difficult to stick to their positions. They were compelled to dismount and began fighting each other. Aiba Khan took the lead and inflicted a blow on Sher Afgan's face, cutting open half of his skull. But that valiant warrior, mustering whatever life and strength was left in him, made a counter-attack in which he embedded his sword like a spike in the belly of Aiba Khan resulting in his instantaneous death. But Sher Afgan too died at the same time".

Haidar Malik Chadura's Tarikh-i-Kashmir gives some more details on Sher Afgan's death. He was an eyewitness of this incident. According to him, Yusuf Khan killed Sher Afgan after Aiba Khan had received the fatal wound at the hands of Sher Afgan. He says that as Sher Afgan had rebelled, his faujdari and jagir of Burdwan was assigned to Yusuf Khan Chak. When Qutb-ud-din set out with some troops to arrest Sher Afgan as ordered by Jahangir, Yusuf Khan and Aiba Khan accompanied Qutb-ud-din. When they reached Mangalkot, near Burdwan, Sher Afgan came to see Qutb-ud-din. Suspecting treachery, he inquired if his assassination was being plotted and, unsheathing his sword, sprang like lightning to attack the governor. The first blow, however, fell on Haidar Malik himself who was wounded and disabled. Next Qutb-ud-din was mortally wounded. When Sher Afgan tried to escape, Aiba Khan came in his way and abused him. Thereupon, Sher Afgan in his turn struck Aiba Khan and killed him. But immediately Yusuf Khan advanced and struck Sher Afgan a heavy blow which killed him.

Jahangir curses Sher Afgan that 'the disgraceful wretch's place will forever be in hell'. This is because Qutb-ud-din Khan, the governor of Bengal, was his foster brother, daughter's son of Shaikh Salim Chisti. Qutb-ud-din's death caused much grief to Jahangir. 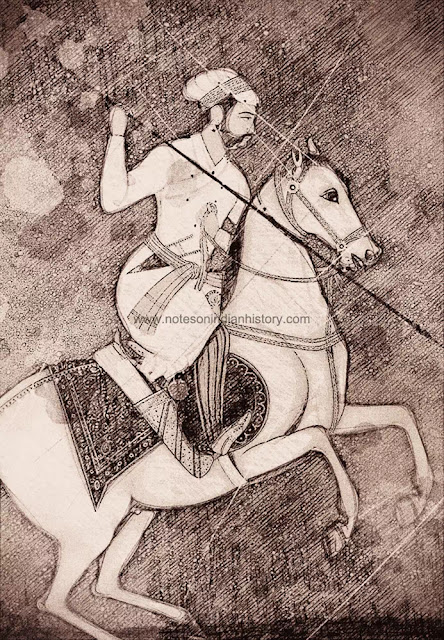 After the death of Sher Afgan, his widow Mihr-un-nissa and her daughter Ladli Begum were sent to Jahangir's court at Agra, who placed her among the attendants of Ruqayya Sultan Begum [or Salima Sultan Begum or his own mother]. There she remained for a long time unnoticed. Her fortune began to shine, when on the New Year's (Nauroz) festival in the 6th year of Jahangir's reign, he chanced to meet her and was so captivated by her beauty. Their marriage took place in May 1611, 4 years and a few days after the death of Sher Afgan.

Gateway to the tombs of Qutb-ud-din Khan Koka and Sher Afgan within the compound of tomb of Shah Bahram Saqqa at Bardhaman, West Bengal

History of rebellions in Bengal: "Since the time when Sultan Muhammad Ghori conquered Delhi, every governor that had been sent from thence (Delhi) to Bengal took advantage of the distance, and of the difficulties of the road, to rebel. If they did not rebel themselves others rebelled against them, killed them, and seized the country. The people of this country had for many long years evinced a disposition to revolt, and the disaffected and evil disposed among them generally succeeded in alienating the loyalty of the governors" - Ziauddin Barani.

Jahangir gave the title of Itimad-ud-daula to Mirza Ghias Beg in 1605.

Aiba Khan was one of the principal officers of Qutb-ud-din Khan.

The Memoirs of Emperor Jahangir written by Himself Translated by Wheeler M. Thackston

History of India, as Told by Its Own Historians By Elliot & Dowson