Posted onMay 04, 2020
Jahangir (reign: 1605-1627) did not mention his marriage with his famous wife Nur Jahan in his Memoirs (Rogers & Beveridge and Thackston), but only this much, that in the 11th year of his reign (1616), he ordered that 'Nur Mahal Begum to be called Nur Jahan Begum'.

Mu'tamid Khan in his Iqbalnama-i-Jahangiri gives few details about their marriage, "Among the great events that occurred during the 6th year of the reign was the emperor Jahangir's demanding Nur Jahan Begum in marriage...It happened that on the celebration of New Year's Day in the sixth year of the emperor's reign, her appearance caught the king's far-seeing eye, and so captivated him that he included her amongst the inmates of his select harem". 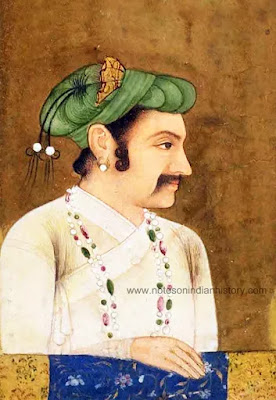 In Tarikh-i-Salim Shahi, Jahangir tells about his marriage with Nur Jahan: "On Nur Jahan, however, who is the superior of the four hundred inmates of my harem, I have conferred the rank of thirty thousand. In the whole empire there is scarcely a city in which this princess has not left some lofty structure, some spacious garden, as a splendid monument of her taste and munificence. As I had then no intention of marriage she did not originally come into my family but was betrothed in the time of my father to Sher Afgan, but after that chief was killed I sent for the Qazi and contracted a regular marriage with her, assigning for her dowry the sum of eighty lacs of ashrefies of five methkals, which sum she requested as indispensable for the purchase of jewels, and I granted it without a murmur....At the period in which this is written, I may say that the whole concern of my household, whether gold or jewels, is under her sole and entire management. Of my unreserved confidence, indeed, this princess is in entire possession, and I may allege without a fallacy, that the whole fortune of my empire has been consigned to the disposal of this highly endowed family; the father being my diwan, [Itimad-ud-daula] the son my lieutenant-general, with unlimited powers, [Asaf Khan] and the daughter the inseparable companion of all my cares".

Tarikh-i Salim Shahi is an earlier version of Jahangir's Memoirs which is considered as forged or garbled, by historians but some of the above statements seems to be reliable.

A Dutch manuscript 'Hindustan Chronicle', probably finished in 1627, was translated into English by Brij Narain. This chronicle was written by either Pieter Van den Broecke or Francisco Pelsaert. They were factors of the Dutch East India Company (VOC). Joanes de Laet, a Dutch historian and one of the Directors of the Dutch East India Company, translated this work into Latin and published in 1631 under the title of 'A fragment of the history of India, gathered from Dutch sources and rendered into Latin by Joannes de Laet'. This Latin chronicle was translated into English by J.S. Hoyland under the title of 'Empire of the Great Mogol'.

The story begins when Jahangir receives the news of murder of his foster-brother Qutb-ud-din Khan Koka by Sher Afgan, near Rajmahal in Bengal (March 1607). Shaikh Ghias-ud-din and Kishwar Khan cut Sher Afgan's body into pieces and sent his head to Jahangir. After that they threw Sher Afgan's brother Qumar Sultan, his son, his mother and his wife Mihr-un-nissa into rigorous imprisonment. They were treated with dishonour. [At this time Jahangir was in Kabul. In March 1608, he reached Agra.]


After reaching Agra, Jahangir ordered Islam Khan to send the family of Sher Afgan to Agra.

When Mihr-un-nissa reached near Bihar Sharif, she heard people talking about a famous dervish named Shah Hamadan, and it is said that all he predicted had come true. She went to visit him. On seeing her, the dervish  predicted that she would be given to king Jahangir and would receive many other marks of good fortune. [According to De Laet, the dervish's words were the following, 'the king would be exceedingly gracious to her, and that her future would be brilliantly successful'.] 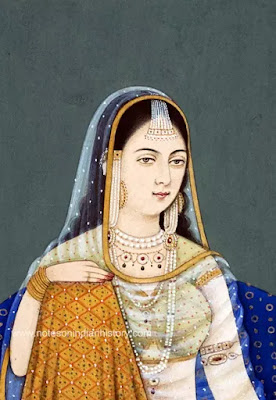 After reaching Agra, they were conducted to Jahangir. He put the brother and son of Sher Afgan in the charge of some of his amirs while Mihr-un-nissa with her daughter were appointed lady-in-waiting to his step-mother Ruqayya Sultan Begum.

Ruqayya Sultan Begum received them with great affection and kindness and always kept Mihr-un-nissa in her company. Once the Begum took her into the harem. Jahangir came in, and on learning that she was present, loosened her veil and saw her face. That was their first meeting.

Few days after came the feast of Navroz. When Jahangir was enjoying himself with the ladies of his harem, Mihr-un-nissa brought to him her little daughter, who was 5-6 years old. Being by this time deeply in love with Mihr-un-nissa, he said to her jokingly, "I will be father to this child". Mihr-un-nissa replied humbly, "Who am I that I should be numbered among the king's wives? Your Majesty must disregard me, who am but a poor widow. Only take pity on this child and show kindness to her".

After this event, Jahangir fell so passionately in love with Mihr-un-nissa. And it became his habit that every evening he went to the house of Itimad-ud-daula, remained there the whole night and returned to the palace only in the morning.

This was for him a revival of old affection (Remember Anarkali?); when Jahangir was prince, he had been in love with her, before she had been betrothed to Sher Afgan. So Akbar did not allow him to marry her. He said, "She is already betrothed. Are there not women enough that you should marry a retainer, who is promised to one of my Turkish soldiers?". Akbar tried his best to dissuade Salim, but since then the prince had always retained a certain affection for Mihr-un-nissa.

Jahangir's visits lasted for forty days. One day he summoned Khwaja Abul Hasan and ordered him to go to Itimad-ud-daula to demand the hand of Mihr-un-nissa for him and also tell him that he was determined to make her the chief of all his wives and concubines. When Itimad-ud-daula received this joyful news he made Sijida and Taslim for Jahangir and replied, "My poor, innocent daughter pleases the king is inexpressible honour for me. How am I, the least of his servant worthy of it?" [There is a slight difference between the two accounts: De Laet writes that, on receiving the 'happy news' Itimad-ud-daula came and prostrated himself before the king after the customary fashion, professed his unworthiness, and declared that he and his daughter should be at the king's disposal.]

Khwaja Abul Hasan conveyed this message to Jahangir. Finally an auspicious day was fixed and Jahangir married Mihr-un-nissa before the Qazi. Great celebrations and feasts were held. And her name was changed from Mihr-un-nissa to Nur Jahan. Jahangir rewarded Itimad-ud-daula by appointing him commander of 5000 horse.

European merchants and travelers have quoted in their travelogues several bazaar gossips they heard about the early romantic affair between Salim and Mihr-un-nissa. However, this one seems to a different one. I will be doing a separate post on the European 'fictions'.

Perhaps this will the earliest source to project an old love affair between Salim and Mihr-un-nissa, though, there is no mention of Jahangir murdering Sher Afgan on that account.

Islam Khan was appointed as governor of Bengal in the 3rd year of Jahangir's reign.

Hyder Malik, the author of Tarikh-i-Kashmir, states that after the death of Sher Afgan, he and his brother Ali Malik protected Mihr-un-nissa and her daughter from the hands of her husband's assassins, in his house, for forty days, before she was sent to Rajmahal.

According to the Dutch chronicler, Mihr-un-nissa was a lady-in-waiting to Ruqayya Sultan Begum, Iqbalnama has Jahangir's own royal mother, while Beni Prasad has Salima Sultan Begum.

Navroz, or the Persian New Year, fells on 21 or 22 of March. As a part of the Navroz celebrations, a fancy fair was set up in the harem. Thomas Coryat mentions that 'during the fair wives of the tradesmen enter the harem with somewhat to sell. The king acts as a broker for his women and with his gains that night makes his supper. Thus he attains to the sight of all the pretty women of the town. At such a kind of fair, he got his beloved Nur Jahan'.

In the end, we may conclude that it was in the fancy fair during the Navroz celebrations of 1611 that Jahangir seeing Mihr-un-nissa for the first time unveiled.

A Contemporary Dutch Chronicle of Mughal India By Brij Narain and Sri Ram Sharma. [A Translation of a Dutch MS. 'Hindustan Chronicle,' Probably by F. Pelsaert, in the Rijksarchief at The Hague.]

The Empire of the Great Mogol. A Translation of De Laet's "Description of India and Fragment of Indian History" [the Latter Based on a Dutch MS. Chronicle Probably Compiled by F. Pelsaert]. Translated by J.S. Hoyland and Annotated by S.N. Banerjee
Share
Post a Comment
Labels#Mughal
Newer
Older