Posted onAugust 02, 2020
Mughal emperor Akbar was a great patron of arts as well as a musician himself. In north India, the splendor of music reached its peaks during his reign (r: 1556-1605). Abul Fazl gives a list of 36 principal musicians in Akbar's durbar. Many of them were natives of Gwalior. Miyan Tansen occupied the first place in this list.

Tansen is to North Indian Music what Thyagaraja is to South Indian Music or Beethoven is to Western Music. Abul Fazl noted that: 'A singer like him has not been in India for the last thousand years'. 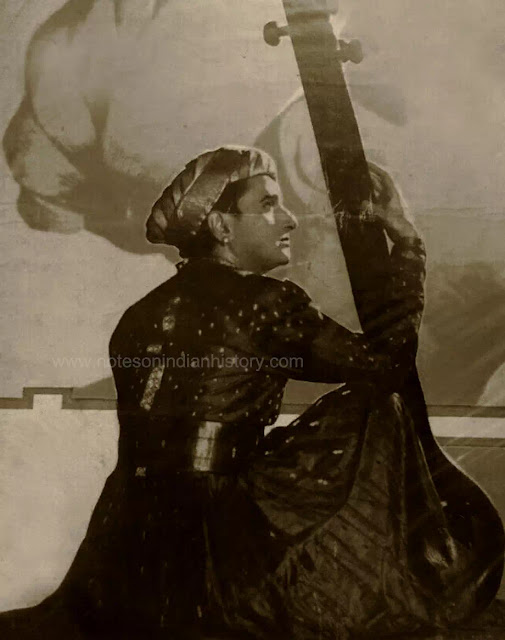 Tansen at the Court of Sur Kings:

The Afghan Sur kings were also lovers of music. At one time Tansen was in the service of Sur kings, most probably in the court of Salim Shah Suri at Gwalior (r: 1545-1554). Tansen's first patron is said to be Daulat Khan Ujala, brother of Baz Bahadur and intimate friend of Salim Shah Suri. He composed many poems in honour of Daulat Khan. Tansen and the Malwa king Baz Bahadur 'a singer without rival' were disciples of the musician king Adil Shah nicknamed Adali (r: 1555).

Tansen was already an accomplished musician before coming to Akbar's court. He was the chief singer at the court of Raja Ram Chand [or Ramachandra] Baghela of Rewa (r: 1555-1592), who was a great patron of music especially the Dhrupadas. Karl Khandalavala and Moti Chandra suggest that Raja Ram Chand in all probability persuaded Tansen to come to his court when the Sur paramountcy ended with Humayun's victory in 1555.

When Tansen was serving Ram Chand, Sikandar Sur (a successor of Salim Shah Suri), made attempts to bring Tansen to Agra, but the Raja declined to spare Tansen.

Raja Ram Chand rewarded Tansen munificently. The author of Virabhanudaya Kavyam [a Sanskrit poem composed in 1555 by Madhava, a poet at the Baghela court], states that "for every song and each tana and each dhrupad he gave a crore of rupees to this musician namely Tanasena, who was the embodiment of the art of music". According to Badauni 'he gave in one day a crore of gold pieces to Miyan Tansen, the musician'. 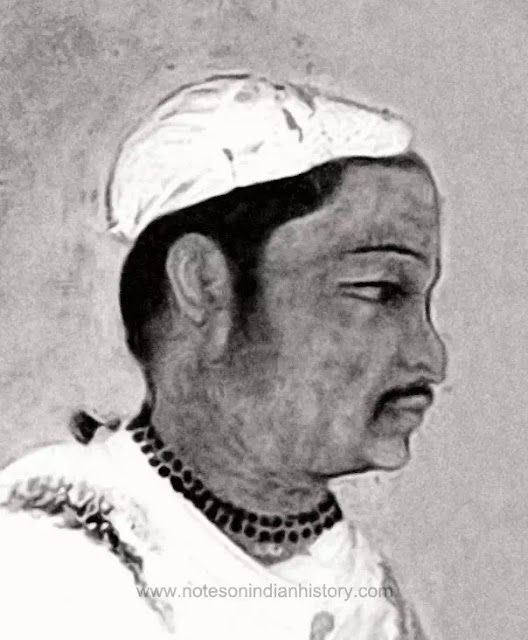 In course of time, Tansen's fame reached the ears of Akbar. Raja Ramachandra was most reluctant to sent Tansen to Agra. But, in 1562, Akbar sent Jalal Khan Qurchi to Rewa to bring Tansen to his court. This time the Raja could not resist the demand of Akbar, and sent his favorite with his musical instruments and many presents to Agra.

Here's the account of Abul Fazl, "As the fame of Tansen, who was the foremost of the age among the kalawants of Gwalior came to the royal hearing, and it was reported that he meditated going into retirement and that he was spending his days in attendance on Ram Chand the Raja of Panna, His Majesty ordered that he should be enrolled among the court-musicians. Jalal Khan Qurchi, who was a favourite servant, was sent with a gracious order to the Raja for the purpose of bringing Tansen. The Raja received the royal message and recognized the sending of the envoy as an honour, and sent back with him suitable presents of elephants of fame and valuable jewels, and he also gave Tansen suitable instruments and made him the cheek-mole of his gifts. In this year Tansen did homage and received exaltation. His Majesty was pleased and poured gifts of money into the lap of his hopes. His cap of honour was exalted above all others. As he had an upright nature and an acceptable disposition he was cherished by a long service and association with His Majesty, and great developments were made by him in music and in compositions".


Badauni remarks, "Miyan Tansen did not wish to leave him [Raja Ramachandra]. Finally Jalal Khan Qurchi came, and brought him back to his sense of duty".

Tansen was given 200,000 rupees for his first performance at Akbar's court.

Tansen was also greatly revered by Akbar's son Jahangir. Jahangir says about him, "Because the black bee is a constant visitor to these flowers [lotus and water lily], the Hindi poets consider it to be like the nightingale in love with the rose, and they produce marvelous poetic conceits based on it. One such poet was Tansen Kalawant, who was in my father's service and without equal in his own time — or any other for that matter. In one of his songs he likened the face of a youth to the sun and the opening of his eye to the blossoming of the lotus and the emerging of the bhaunra. In another one he likened the beloved's wink to the motion of the lotus flower when the bhaunra alights on it".

Shaikh Salim Chishti was very fond of Tansen's music. Jahangir mentions that the Shaikh at the time of his death wished to hear Tansen's singing.

We do not have any authentic biography of Tansen. In fact, there are more legends than history regarding the early life of this great musician. From Ain-i-Akbari we know that Tansen belonged to Gwalior.

The year of his birth is not certain. According to some authors he was born around 1530. Some others make it 1490s and others 1506.

The real name of Tansen was Tannamitra, Tanna Misra, Ramtanu or Trilochan. His father's name was Makarand Pande, Makarand Misra or Mukund Mishra, a Gauda Brahmin. The author of Virabhanudaya Kavyam calls him 'Tanasena'.

It is said that Tansen was born with the blessings of the famous Sufi saint Muhammad Ghaus of Gwalior. Badauni in his biography of Shaikh Muhammad Ghaus does not make any mention of Tansen. The Shaikh died in 1562-63 at Agra at the age of 80 and was buried in Gwalior. 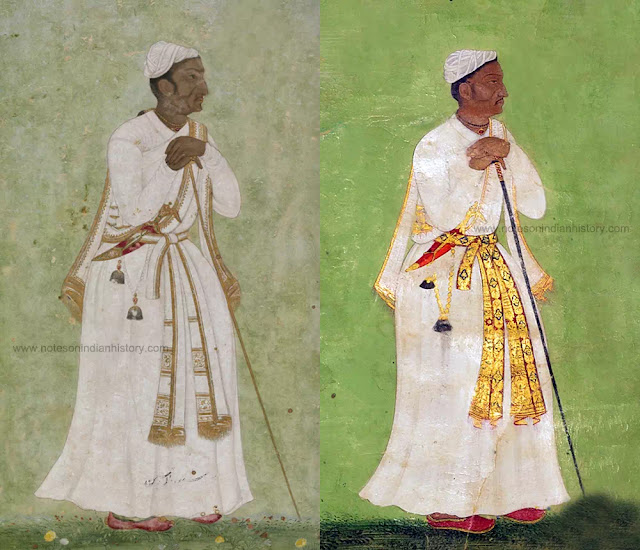 It is also not certain whether Tansen actually converted to Islam, however, 'Tansen embraced Islam a few years after entering Akbar's service', this statement is not true because Akbar's religion was not Islam, but Tauhid-i-Ilahi or Divine Monotheism. Tansen's name is not in the list of followers of Tauhid-i-Ilahi.

It seems that Tansen had his early training in music at the Gwalior School of Music founded by Raja Man Singh Tomar (r: 1486-1518). He had composed some Dhrupad compositions in praise of this king.

Tansen was a singer, musician and a poet. He created many new ragas like Miyan-ki-Todi, Miyan-ki-Malhar, Miyan-ki-Sarang and Darbari Kanada. He used to play a musical instrument called Rabab.

Tansen was particularly skilled in Dhrupadas. Many of his compositions are written in the name of Akbar, Ram Chand Baghela and Daulat Khan.

He is said to have composed three books: Sangeet Sar, Ragamala and Ganesh Stotra.

Tansen died in April 1589 at Lahore, which caused great grief to Akbar. By the order of Akbar the royal musicians and singers accompanied Tansen's body to the grave, making melodies as at a marriage. Akbar remarked that Tansen's death was the annihilation of melody. It seems that, in a thousand years, few have equaled him for sweetness and art!

It is said that Tansen's body was later taken to Gwalior and was buried near the tomb of Shaikh Muhammad Ghaus. There is a tamarind tree near the so-called tomb of Tansen at Gwalior, the leaves of which are chewed by singers in the belief that they sweeten their voice.

There are many stories and legends about Tansen's musical powers. His Deepak raga lighted lamps. Raga Megh Malhar brought down rainfalls.

Tansen Sangeet Samaroh is celebrated every year in the month of December at Behat in Gwalior district, Madhya Pradesh.

P.K. Gode, 'A Contemporary Sanskrit Tribute to the Musical Talents of Tanasena, the Greatest Musician of Akbar's Court

Baba Ramdas who was previously in the service of Salim Shah Suri, was also among the 36 court musicians. Baba Ramdas's name comes second in the list.

In Akbar's court, the musicians are arranged in seven divisions, one for each day in the week.

Raja Ram Chand Baghela - Among the three great Rajas of Hindustan, whom Babur mentions in his Memoirs, the Baghela Rajas of Bhata [Rewa] are the third. Birbal also had been in the service of Raja Ram Chand. "Ram Chand in his natural disposition was of such high spirit, that he has none equal in our days", says Badauni. King Ramchandra is known for his hospitality. He has given refuge to Sultan Adil Shah 'Adali' after his defeat by Ibrahim Sur. When Ibrahim Sur [one of the successors of Salim Shah] invaded Rewa, the Raja fought with him and made him a prisoner. He, however, treated Ibrahim Sur with great honour. Ram Chand was the last independent Baghela king. He afterwards submitted to Akbar.