Mysore is famous for its breeds of cattle. Amrit Mahal or Sultan's breed is the finest breed of draught cattle found in Mysore. It consists of strains of three principal varieties: Hallikar, Hagalavadi and Chithradurga.

Did you know that the Amrit Mahal played a significant role in the Anglo-Mysore wars?

Mysore army had a very good transportation network, which was one of the chief factors that contributed to the success of Hyder Ali and Tipu Sultan. Often remaining upwards of 16 hours in yoke, the Amrit Mahal bulls constantly supplied the Mysore armies with all the ammunition, food, equipment. They dragged the heavy field guns even in tough and dangerous roads to give instant artillery cover when needed. These fierce animals often saved the Mysore armies from defeat because of their speed and unequalled endurance.

The Amrit Mahal cattle are active, fiery and walk faster than the troops. They are usually white or grey in colour. The breed as a whole occupied a position among cattle which for form, temper and endurance is similar to that of the thoroughbred among horses. They are intelligent and highly trainable, however, require special care and attention in order to be handled easily. Bullocks of four years old after some training were used in the armies of Hyder and Tipu.

"Amrit Mahal cattle could travel thirty-five to forty miles a day while the cumbersome British army with its tents and trunks, women and servants could hardly travel ten miles a day", writes Major Meer Ibrahim.

The cattle of Srirangapatna then passed into the hands of the Wodeyars of Mysore; Chamaraja Wodeyar V (r: 1617-1637) and Ranadhira Kanteerava Narasaraja Wodeyar (r: 1638-1659) made their own additions from time to time and assigned kavals in different parts of the kingdom for the purpose of grazing.

During the reign of Chikka Devaraja Wodeyar (r: 1673-1704), the cattle establishment became one of the departments of administration, known as Benne Chavadi (meaning: butter department). It served both as a breeding stud and to supply milk and butter to the palace. Chikka Devaraja introduced for the first time the system of branding them with his initials.

Hyder is supposed to have obtained a special breed of small Brahmani bulls noted for endurance and fast trotting from a conquered poligar of Tiruchirappalli [Trichinopoly]. By a cross between which and the indigenous breed of Mysore the Amrit Mahal breed was produced. Hyder used them in warfare for transport. He had around 60000 bullocks in various parts of the kingdom.

In military warfare, Hyder Ali was brilliant in tactics and in expedience. He moved his troops with unequalled rapidity, animation and skill that even his enemies admired him the most. The Britishers noted the excellence of this breed during their various encounters with Hyder Ali. Hyder's bullocks could draw off his artillery before those of the British could be moved. These bullocks enabled Hyder Ali to march 100 miles in two days and a half to the relief of Chidambaram in the second Anglo-Mysore war (1780-1784).

Nawab Tipu Sultan took great interest in animal husbandry and thoroughly organized the cattle department. He changed the name of Benne Chavadi to 'Amrit Mahal', which literally means milk department. The bullocks were assigned vast kavals for grazing and training. Tipu classified them as gun, pack and plough bullocks and appointed the Brahmin Purnaiya to look after the department. [According to some historians Tipu afterwards changed the name of Amrit Mahal department to 'Keren Barick'].

He also issued a Hukumnama, regulations for the administration of Amrit Mahal department. As part of the regulations systematic count of heads of cattle was done regularly. Tipu personally attended the annual musters and distributed rewards.

These bulls enabled Tipu Sultan to cross the peninsula in one month (approximately 400 miles in less than 4 weeks) for the recovery of Bednore (1783) and to march 63 miles in two days before General Meadows could make any attempt to cut off his safe route to Srirangapatna.

After the fall of Tipu Sultan in the 4th Anglo-Mysore war in 1799, the Amrit Mahal bulls and the department fell into the hands of the British. It was then entrusted to the Wodeyars. 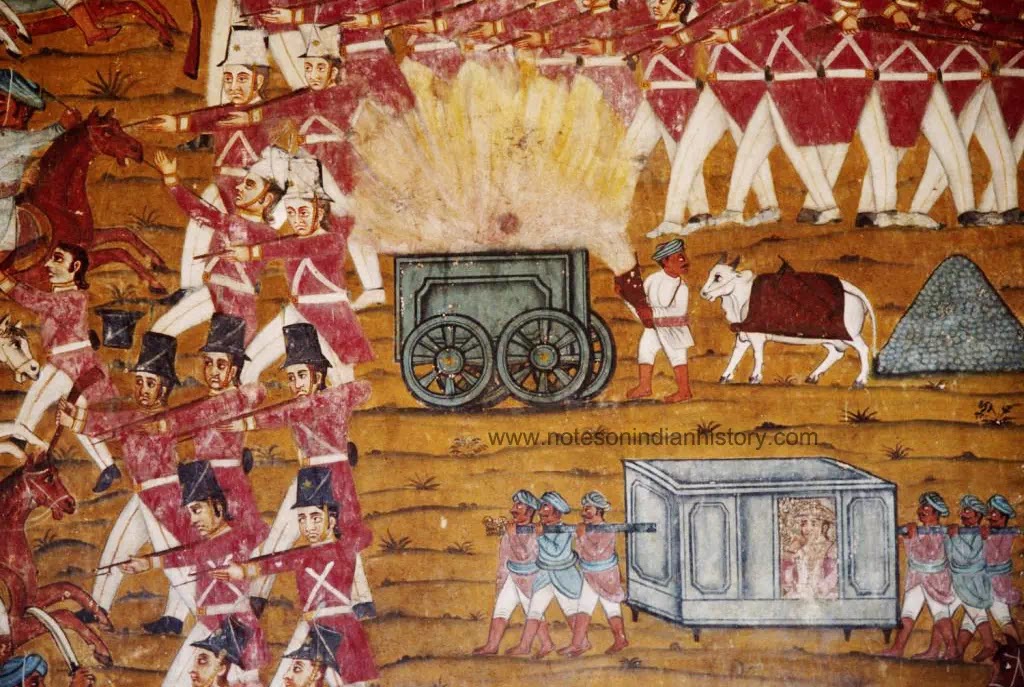 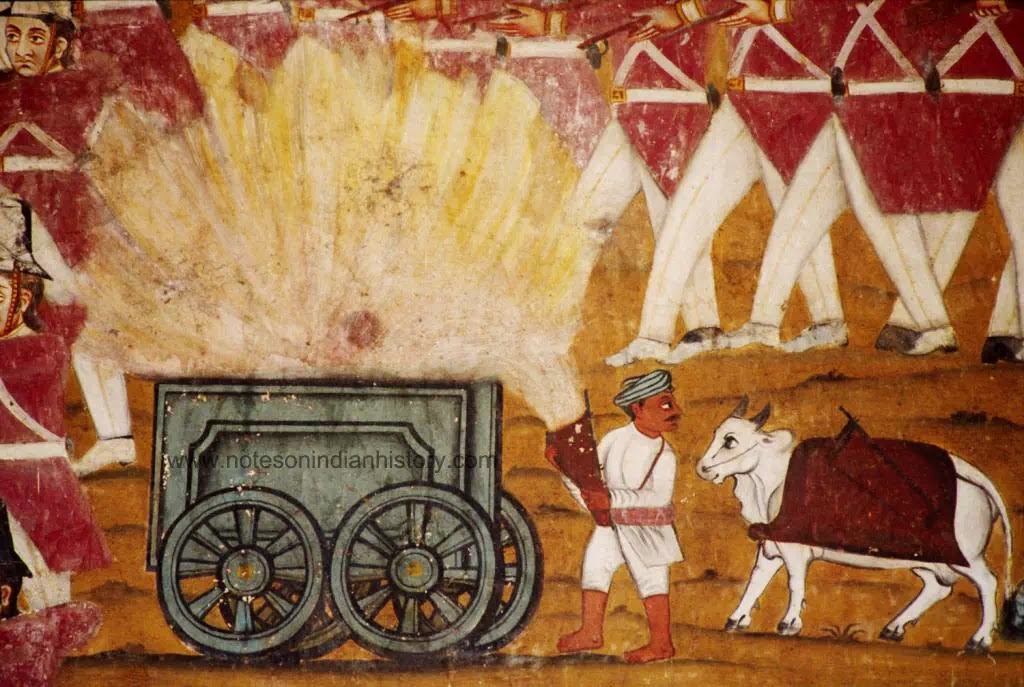 Amrit Mahal cattle in later times enabled General Pritzer to march 346 miles in 25 days in pursuit of the Peshwa and also enabled General Campbell after the failure of his Bengal equipment to advance on Ava and bring the war to a favourable termination. It was also these bullocks which enabled Arthur Wellesley, the Duke of Wellington to execute those movements of unexampled rapidity which are the admiration of every military man, and in consideration of whose services he recommended it to protection in a letter addressed to the Commander-in-Chief. It is said that Arthur Wellesley during the Peninsular war in Spain often regretted that he had not the assistance of the Amrit Mahal cattle.

By the end of 1813 the cattle had degenerated to such a degree that it was on the edge of extinction. The cattle management was then taken over by Captain Harvey of the Madras Commissariat.

Tipu's Amrit Mahal establishment at Hunsur remained for a long time under the care and supervision of able men like Capt. M. A. Rowlands, Dr. Gilchrist and Major Inroy. In 1860, a large number of Amrit Mahal draught cattle found their way to Egypt being bought for the service of Khedive. That the breed had not deteriorated was evident during the Afghan wars, when they proved their superiority to all the other cattle employed.

According to an article on 'The Hindu' dated November 2019, 63 grasslands spread over 68,267 acres, meant for grazing the breed, are located in six districts of Karnataka State.

"The system introduced by Tipu Sultan continues. Once a year, we take the systematic count of heads of cattle in the presence of all the staff", said S. L. Rajashekharaiah, Assistant Director of Amrit Mahal Cattle Breeding Centre, at Ajjampura in Chikkamagaluru district.

This center was set up by the British in 1929. It has sub-centers in Hassan, Chikkamagaluru, Tumakuru, Mandya, Davangere and Chitradurga districts. It houses more than 300 cattle. There are over 2000 Amrit Mahal cows and buffaloes being sheltered in the sub-centers under the administrative limits of Ajjampura center.

Today the Amrit Mahal is on the edge of extinction. Their number has been steadily declining and its characteristics changing due to lack of proper care.

"It is the most superior and enduring breed of cattle ever. It can walk tirelessly up to 12 hours, is hard working and has served people in Karnataka for centuries. They definitely deserve better" says Tippeswamy, care-taker of Amrit Mahal calves at the Ajjampura breeding center.

Note on the Cattle of Mysore By A. Kristnasamiengar and Captain. H. T. Pease