We all know that Mumtaz Mahal was the favourite wife of Mughal emperor Shah Jahan for whom the world famous tomb called Taj Mahal was built. Begun early in 1632, the Taj was completed in 1642-43.

What was the reason for choosing the name 'Taj Mahal'?

The name 'Taj Mahal' was actually given by European travelers. Let's see accounts of some European Travelers who visited Agra at the time of Taj Mahal's construction. Some of them mention the queen as 'Taj Mahal, perhaps an abbreviation of 'Mumtaj'. [One of the wives of Mughal emperor Akbar Shah was also named Taj Mahal]. In other words, 'the mausoleum of Taj Mahal' gradually became 'Taj Mahal'':

I got the below engraving from the Dutch book 'Oud en nieuw Oost-Indiën, vervattende een naaukeurige en uitvoerige verhandelinge van Nederlands mogentheyd in die gewesten' (1726) authored by François Valentyn. As you see the title of this picture is 'Tadjoe Mahal Gemalin van Sjah Djihaan', which can be translated into English as 'Taj Mahal, consort of Shah Jahan'. 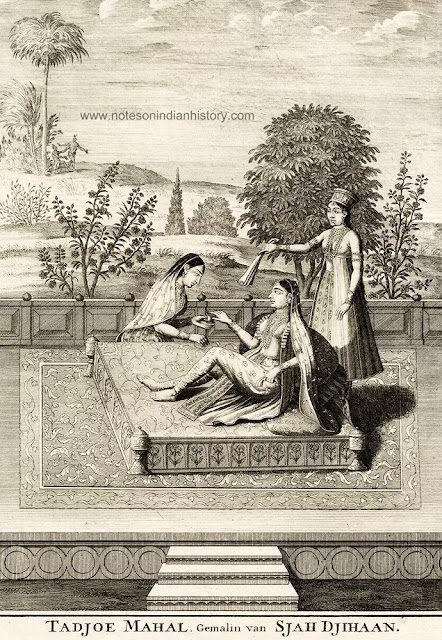 J. B. Tavernier, a French jewel merchant: Of all the tombs at Agra, that of the wife of Shah Jahan [the Taj Mahal] is the most splendid. He purposely made it near the Tasimacan [Taj Ganj, a great bazaar], where all foreigners come, so that the whole world should see and admire its magnificence....I witnessed the commencement and accomplishment of this great work, on which twenty-two years have been spent, during which twenty thousand men worked incessantly; this is sufficient to enable one to realize that the cost of it has been enormous.
Peter Mundy, an employee of the East India Company (1632): This king is now building a sepulcher for his late deceased queen Taj Mahal whom he dearly affected, having had by her 9 or 10 children, and thought in her life time to use no other woman. He intends it shall excel all other. The place appointed (is) by the river side where she is buried, brought from Burhanpur where she died accompanying him in his wars.....There is already about her tomb a rail of gold (which was removed in 1642 and was replaced by the present screen of marble). The building is begun and goes on with excessive labor and cost, prosecuted with extraordinary diligence, gold and silver esteemed common metal, and marble but as ordinary stones.
Francois Bernier, a French traveler and physician (1663): I decidedly think that this monument deserves much more to be numbered among the wonders of the world than the pyramids of Egypt, those unshaped masses which when I had seen them twice yielded me no satisfaction.
Jean de Thevenot, a French traveler (1666): The fairest of all is that which Shah Jahan erected in honour of one of his wives called Taj Mahal, whom he tenderly loved, and whose death had almost cost him his life...Only so much I'll say that this King having sent for all the able architects of the Indies to Agra, he appointed a council of them for contriving and perfecting the tomb which he intended to erect, and having settled salaries upon them, he ordered them to spare no cost in making the finest Mausoleum in the World, if they could. They completed it after their manner, and succeeded to his satisfaction.
The site selected for the mausoleum originally belonged to the Kachhwaha kings since the time of Raja Man Singh. It was purchased from Raja Jai Singh, the then owner in exchange of another edifice. Marble stones used for the construction of Taj Mahal was brought from Makrana, the ancestral estate of Raja Jai Singh.
Court historians from Shah Jahan's time simply called it the rauza (tomb) of Mumtaz Mahal (Rauzah-i-Mumtaz Mahal). The name 'Taj Mahal' came into existence under the British when 'Taje Mahal' based on abbreviations of the queen's name common among Europeans, was corrupted into the present form.
Reference:
In the Shadow of the Taj: A Portrait of Agra By Royina Grewal
Architecture of Mughal India (The New Cambridge History of India) By Catherine B. Asher
Share
Post a Comment
Labels#Monuments, #Mughal
Newer
Older