Tipu Sultan's religious policy is a subject of great controversy. Some people believe that Tipu Sultan, the ruler of Mysore was a fanatic and bigot. However, the letters of Tipu Sultan in the archives of the Sringeri Math [Mutt] tells something else. Furthermore, the appointment of Hindus to various high offices and grants, gifts etc. to Hindu temples and Brahmins falsify all wrong accusations.

Here are some interesting legends associated with Tipu Sultan and Karnataka temples.

To the left of the shrine of Goddess Parvathi in the famous Srikanteshwara swamy temple, is a green jadeite linga (now known as Padshah Linga) gifted by Tipu Sultan to the temple. The Kannada inscription on the marble tablet above the door of the sanctum sanctorum reads: 'Jadite Linga offered to Swami, installed by Tipu Sultan'.

"It is said that Tipu Sultan's royal elephant which suffered from eye problems had lost its eye sight. Tipu was told about the glory of Srikanteshwara temple that one's wishes would be fulfilled if one offered prayers to the lord with all devotion. He was advised by the priests of the temple, to bathe the elephant in river Kapila and wipe its eyes with the river water used for the abhishekam of Lord Srikanteshwara for one mandala that is 48 days. To his surprise, the elephant regained its sight. Impressed by the fact, he is said to have called Lord Sri Nanjundeswara 'Hakim (Doctor) Nanjunda', says the temple priest Sadashivaswamy who has been serving in the temple for 62 years.

"Tipu gifted a pachche linga adorned with makara kanti haara (necklace) to the temple. The kanti haara has a dollar with the symbol of moon, an Islamic symbol. It is kept at the strong room of the temple and put on the idol once in a year on the day of Girijakalayam in the month of Ashada. It is even said that he had gifted land at Chandagala in Srirangapatna for the money required for daily abhisheka, pooja and others to the pachche linga," says the temple priest.

The Salam Mangalarati ritual performed in the temple in between 6.30 pm and 8 pm is in reverence to Tipu Sultan, to commemorate his visit to the temple in 1763.

About two centuries back, when pradosha pooja was going on in the temple on one evening, suddenly Tipu Sultan and his force appeared in the eastern gate. Everyone in and out of the temple was frightened to see the Sultan and his soldiers. But Tipu attended the pooja with great devotion and accepted the prasada from the priest. The then priest (great grandfather of the current priest Sreedhar Adiga) informed Sultan that the Mangalarati of pradosha pooja would hereafter be called as Salam Mangalarati as a mark of respect  and remembrance of his royal visit to the temple. Later Tipu Sultan granted lot of landed properties to this temple through his vassal kings of Keladi and Nagara. Sreedhar Adiga is the hereditary priest of Mookambika temple who used to conduct this pradosha pooja. This information was passed through generations and Sridhar Adiga got it from his father Visweswara Adiga, who in turn got it from his father Ramachandra Adiga.

During the ritual, special devotional song is recited, praising the goddess and also the unique drum beats accompanied by music is played. 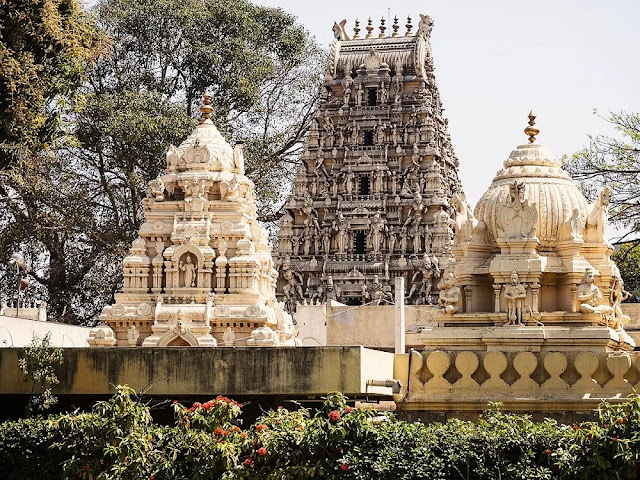 Kote Venkataramana Temple is adjacent to the Tipu Sultan's Summer Palace in Bangalore. It is said that Tipu Sultan paid respect to the deity in the Kote Venkataramana temple regularly. There was a 80-feet tall octagonal stone pillar in front of the temple which is believed to have saved Tipu Sultan from a British cannonball during the 3rd Anglo-Mysore war in 1791.

Tipu Sultan: The temple that saved Tipu Sultan was built when Wadiyars bought Bengaluru in 1690 - The Economic Times