Posted onJanuary 27, 2021
Few years ago there had been circulating an image on social media claiming to be of real Tipu Sultan, the ruler of Mysore. Many people have shared it as the 'real photo' of Tipu Sultan and the image has then gone viral.
Those people seem to have forgotten the fact that photography was invented in 1826-27 only. Tipu Sultan's reign was from 1782-1799. 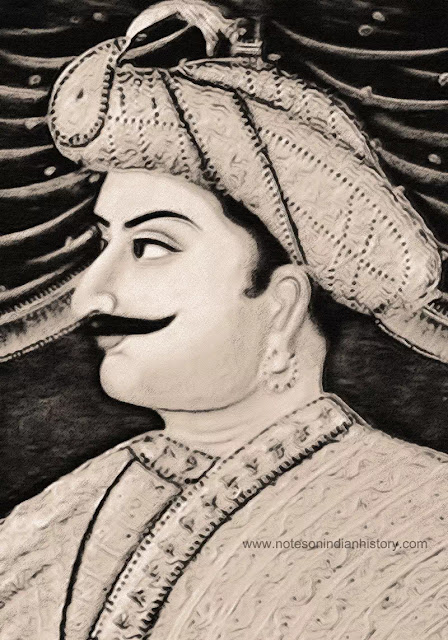 The rumour makers must have got this image from the following Wikipedia link:
https://commons.wikimedia.org/wiki/File:TippuTipSlavetrader.jpg
According to the above Wikipedia link and Alamy, the image misidentified as Tipu Sultan was that of Tippu Tib or Tippu Tip, a slave-and-ivory trader from Zanzibar. Here's the link:
https://www.alamy.com/tippu-tip-african-slave-trader-image245859568.html
According to Alt News and Getty Images, it is in fact a photo of Rumaliza, a slave and ivory trader from East Africa of the 19th century, who became the Sultan of Ujiji.
https://www.gettyimages.in/detail/news-photo/portrait-of-mohammed-bin-hassan-rumaliza-an-important-news-photo/526582340 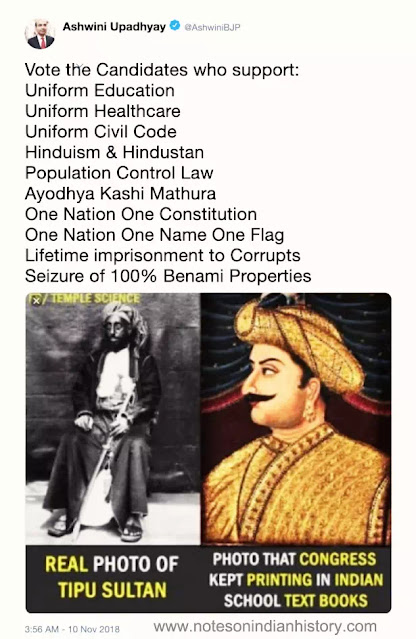 So how Tipu Sultan actually looked?
Appearance of the Sultan

The Madras Courier report of 11th April 1794 and Captain Doveton who accompanied the hostage princes back to Srirangapatna, gives the following description of the Sultan:

The Sultan was dressed in a plain muslin gown, without any jewels or ornament. He wore a deep red turban of the same form worn by the princes, and a dagger was there in his girdle. Tipu has a very majestic deportment, and is of the middle stature, with a countenance very expressive; his eye is particularly animated and scrutinizing, and blood-shot; his nose large with oblique dilated nostrils, his mouth small, but with thick lips, and an eminence towards the center of the upper lip, which projects. He wears thin and narrow whiskers, not curled on the upper lip, and only in the upper lip; his eyebrows are well arched, and rather low; his aspect serious, determined and austere; he is darker than the prince Abdul Khaliq.

Major Allan was among the British officers who founded the body of Tipu Sultan lying among the heaps of dead bodies on 4th May, 1799.

"Tipu was of low stature; corpulent, with high shoulders, and a short thick neck, but his hands and feet were remarkably small; his complexion was rather dark; his eyes large and prominent, with small arched eye-brows, and his nose aquiline. He had an appearance of dignity, or perhaps of sternness; in his countenance, which denoted him above the common order people. His dress consisted of a jacket of fine white linen, loose drawers of flowered chintz and a crimson cloth of silk and cotton round his waist. A handsome pouch with a red and green silk bell hung across his shoulder. He had an amulet on his arm, but no ornament whatever", says Major Allan.

Alexander Beatson states that Tipu was about five feet eight inches. He had large full eyes, small arched eyebrows and an aquiline nose. He was of brown complexion and had small hands and feet, short neck, and square shoulders.

Tipu Sultan was fond of riding, and particularly excelled in horsemanship. His dress was remarkably plain; he usually wore a sword slung across the body, with a dagger in his gridle. His thoughts were constantly bent on war and military preparations. He has been frequently heard to say that in this world he would rather live two days like a tiger, than two hundred years like a sheep.

According to Kirmani, Tipu wore no beard but retained his moustache. "On his journeys and expeditions, he wore a coat of cloth of gold, or of the red tiger stripe embroidered with gold. He was also accustomed to tie a white handkerchief over his turban and under his chin. Towards the end of his reign he wore a green turban Shumlehdar, (twisted apparently) after the fashion of the Arabs, having one embroidered end pendant on the side of his head. He was so modest that no one ever saw any part of his person except his ankle and wrist, and even in the bath he always covered himself from head to foot", notes Mir Hussain Ali Khan Kirmani.
Reference:
An account of the campaign in Mysore (1799) By Sir Alexander Allan, Bart
https://www.altnews.in/not-tipu-sultan-not-tippu-tip-either-who-is-the-person-in-the-viral-image/
A view of the origin and conduct of the war with Tippoo Sultaun By Alexander Beatson
Share
Post a Comment
Labels#Mysore/Karnataka
Newer
Older