Ratneshwar Mahadev temple situated between Manikarnika and Scindia ghats is one of the wonders of Varanasi (also known as Kashi & Benares) in Uttar Pradesh.

The temple remains partially submerged in the river most of the time a year. This temple is also referred as the sunken temple, floating temple, submerged temple etc. 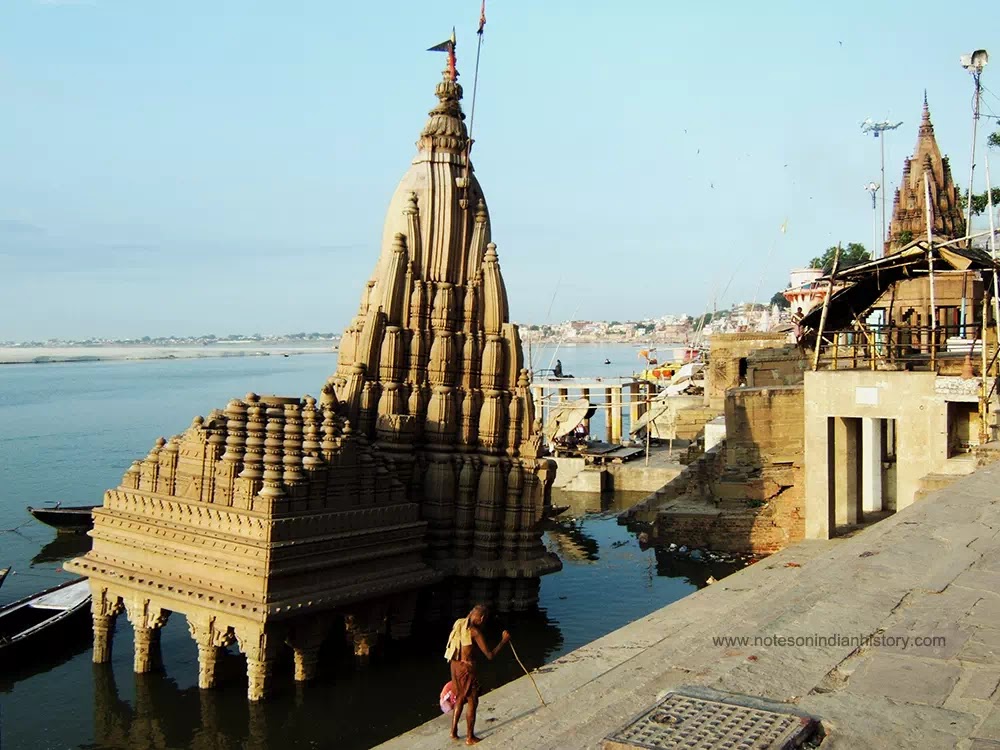 According to Wikipedia, the 12 meters tall temple leans over 9 degrees, that means 5 degrees more than the famous monument in Italy, the leaning tower of Pisa.

Certain Facebook/WhatsApp posts claims that the height of Pisa is 54 meters while the Ratneshwar temple is 74 meters tall!

Those who have actually seen the temple confirms that it is not more than 13-14 meters.

Most probably, the temple had fallen into the river as a result of the sheer weight of the Scindia Ghat's construction in the mid-nineteenth century. 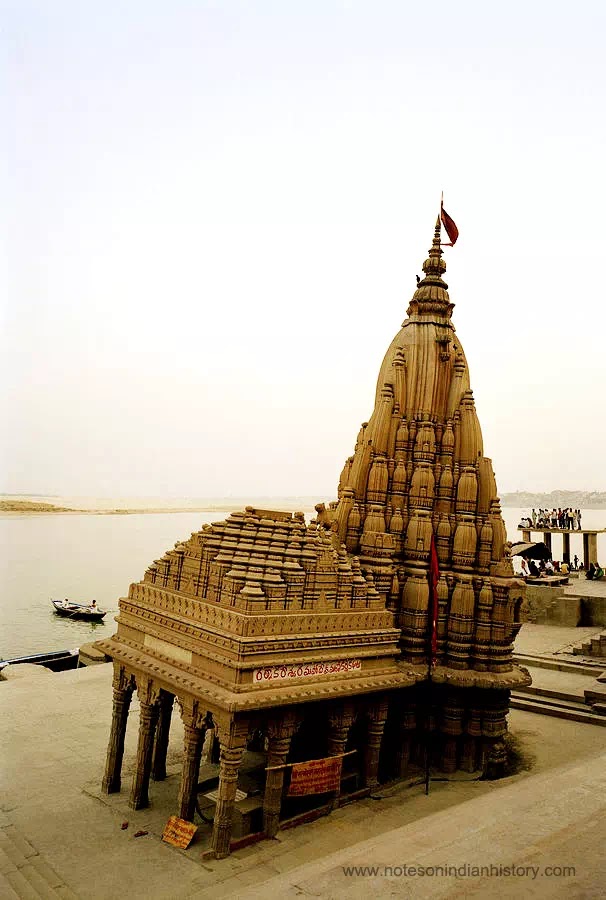 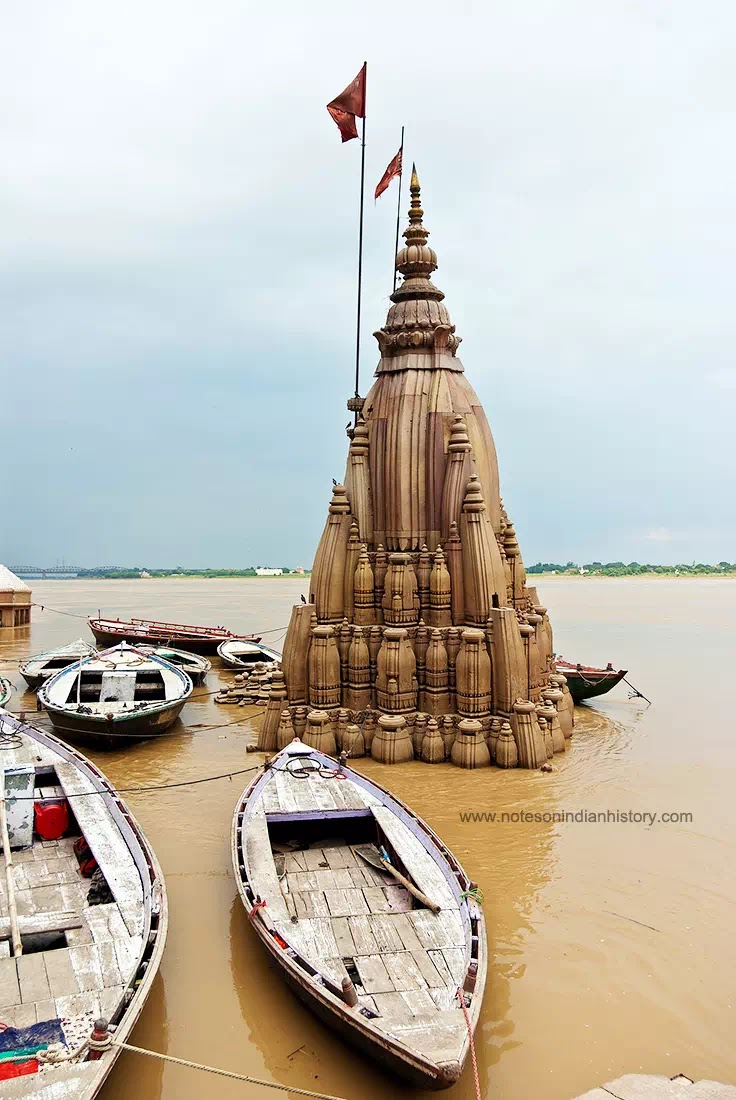 This temple is also often referred to as Matri Rin, ie., Mother's Debt. The story goes that once a rich man built a temple in his mother's honour. Once the temple was ready, he brought the mother to the spot to show it off. 'This,' he proudly declared to her, 'repays everything I owe you!' He had barely uttered these words when a foundation stone sank deeper into the soil and the temple began to lean.

Bholanauth Chunder records that "the leaning temple threatens to give way every moment, but it has remained in that posture for several years. The foundation ground has partly slipped down, and the river annually washes away its base, still it is spared as a standing miracle".

'Ganga: A journey Down the Ganges River' mentions that the Shiva temple called Ratneshwar actually collapsed around 1810, as the result of an earthquake that disturbed its pilings.

The real mystery is that in the 1st drawing there is only one leaning tower. And in the second one there are two.

Hobart Caunter writes in his "The Oriental Annual, Or, Scenes in India, (1834)": "One of the most extraordinary objects to be witnessed at Benares, and which is generally one of great curiosity to the stranger, is a pagoda standing in the river; there is nothing to connect it with the shore. The whole foundation is submerged, and two of the towers have declined so much out of the perpendicular as to form an acute angle with the liquid plain beneath them. This pagoda is a pure specimen of ancient Hindoo architecture; it is of very great antiquity, and from its position now entirely deserted, for its floors are occupied by the waters of the Ganges, and, as far as I have been able to ascertain, there remain no records respecting it. No one appears to know when it was built, to whom it was dedicated, or why its foundations were laid upon the waters of the sacred river, unless it was on account of their sanctity. It is surprising how it has resisted the force of the current for so great a number of years, and that the dislocated towers should still stand, pointing, as it were, to their own approaching destruction, amid the constant percussion of the stream, which is uncommonly violent during the monsoons, and maintaining their apparently insecure position in spite of those periodical visitations, to the violence of which every part of the peninsula is more or less exposed. It has been surmised, and with probability, that this temple was originally erected upon the bank of the river, which then offered a firm and unsuspected foundation; but that, in consequence of the continual pressure of the stream, the bank had given way all round the building, which, on account of the depth and solidity of the foundation, stood firm while the waters surrounded it, though the towers had been partially dislodged by the shock. Or it may be that even the foundation sank in some degree with the bank, thus projecting the two towers out of the direct perpendicular, and giving them the very extraordinary position which they now retain."

"Not more than fifty paces from the pond on the shore of the Ganges stands an uncommonly beautiful temple consisting of three towers, but the ground has given away under them; one is leaning to the right, the other to the left, and the third has almost sunk in the Ganges", from Ida Pfeiffer's Voyage Round the World (1851).