Background: In the third Carnatic war, the British defeated their rival French in the battle of Wandiwash in Jan 1760 and captured all their territories. During this period, the major powers of India were the Marathas of Pune, the Nizams of Hyderabad and Hyder Ali of Mysore. The Marathas suffered a crushing defeat at the hands of the Afghan Ahmad Shah Abdali in the third battle of Panipat (Jan 1761), but they were soon re-established under Peshwa Madhav Rao (1761-1772). With the victories in the battles of Plassey (June 1757) and Buxar (Oct 1764), the British were able to establish themselves in Bengal, Bihar and Orissa. Muhammed Ali Khan Wallajah (1749-1795), the Nawab of Arcot (The capital of Carnatic) was already an ally of the British East India Company.

After the occupation of Sira, Hyder turned his attention towards the Poligars of Chikkaballapur, Raidrug, Harapanahalli and Chitaldrug and defeated them. In 1763, he conquered Bednore (also known as Canara, Keladi or Ikkeri) including the port of Mangalore. He designed to make Bednore his capital and renamed the place as Hyder Nagar. Later in the same year he conquered Soonda and Savanur. In 1761, Hyder had agreed to give Baramahal to the Marathas though which was never surrendered. Moreover, Hyder had seized Sira too. Therefore, in 1764, Peshwa Madhav Rao attacked Srirangapatna and defeated Hyder. Madhav Rao retired on the condition of a payment of 32 lacs of rupees and the surrender of all places taken from Morari Rao, and also the district of Savanur. Shortly afterwards Hyder occupied the northern districts of Malabar including Calicut in 1766. The growing power of Hyder Ali became a terror to the trios: Nizam Ali (1762-1803), Madhav Rao and the British. In 1767, the British formed an alliance with the Nizam and the Marathas against Hyder Ali. 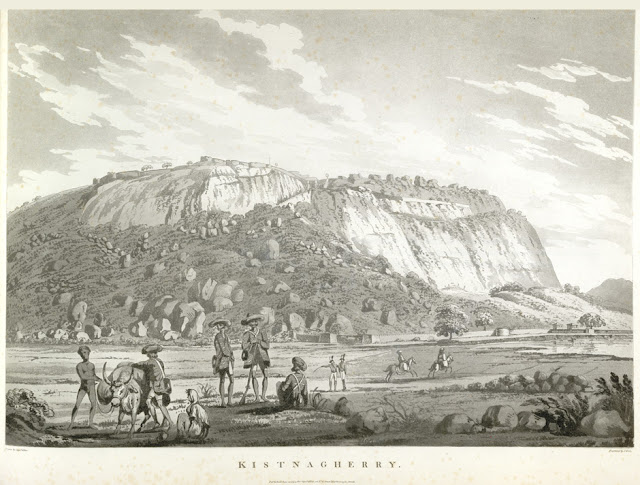 The British and the Marathas: In 1766, the Marathas under Madhav Rao declared war against Hyder. The Peshwa got the possession of Sira which was then held by Mir Ali Raza Khan, the brother-in-law of Hyder, who had treacherously gave it up in return for Gurramkonda. Hyder made peace with Madhav Rao by paying 35 lacs of rupees. Half amount was paid immediately and for the rest Kolar was kept with them for security. Meanwhile, discovering that the old minister Nanjarajaiya was negotiating with the Marathas and Nizam Ali, Hyder made him a prisoner and reduced his allowances. Shortly afterwards the amount was paid, Madhav Rao returned to Pune in Mar 1767.

The British and Nizam Ali: The British General Calliaud concluded a treaty with Nizam Ali on 12 Nov 1766 with the object of plundering Mysore. The Nizam invaded Mysore accompanied by the British troops under Colonel Joseph Smith and advanced upto Bangalore. But Hyder secretly negotiated with the Nizam and bought him off.

Hyder and Nizam Ali: Afterwards, Nizam Ali joined Hyder and together they attacked the Carnatic, an ally of the British, in Aug, 1767. The British took possession of Tiruppattur, Kaveripatnam and Vaniambadi from Hyder. In Sep 1767, Colonel Smith defeated the confederates at Changama and then at Tiruvannamalai. In the same month, Hyder and the Nizam attacked Colonel Smith at Trichinopoly and recaptured Tiruppattur and Vaniambadi. Hyder laid siege to Ambur (10 Nov-7 Dec 1767) but was gallantly defended by Captain Calvert. At Singarapettai, Hyder attacked the British, in which he lost several of his officers; "he had his horse shot under him, and received a bullet through his turban".


Hyder marched towards Gurramkonda, where he succeeded in inducing his brother-in-law Mir Ali Raza Khan to return to his allegiance. Thus reinforced Hyder entered Baramahal and passed onto Coimbatore, while he sent his general Fazl Ulla Khan towards Srirangapatna with a large force to reduce the smaller posts held by the British. Hyder seized Karur and Kaveripuram. He thus reconquered all the districts on the ghats which had been wrested from him by the British. Hyder now marched towards the British East India Company's headquarters at Madras. He suddenly appeared at the gates of Madras and surprised the British. The Madras government dispatched Captain Brooke to offer terms of peace; and the Treaty of Madras was signed on Apr 2nd, 1769. As per the treaty, both sides agreed to return the prisoners and places. Both sides also agreed to help each other if there is any foreign invasion. 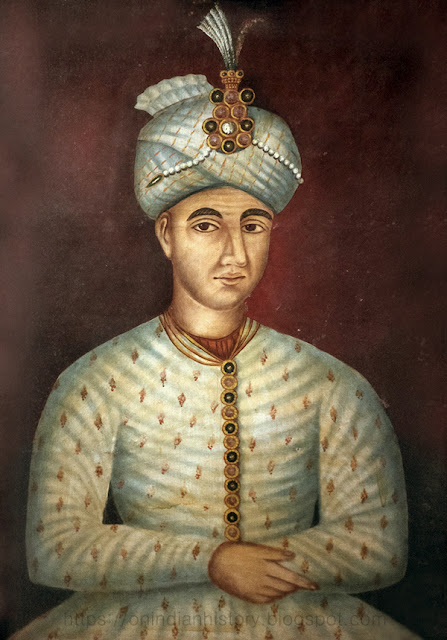 The Battle of Plassey: On Jun 23, 1757, Siraj-ud-Daula, the Nawab of Bengal, was defeated by Robert Clive.

The Battle of Buxar: The British under Major Hector Munro defeated the combined forces of Mir Qasim, the Nawab of Bengal, Shuja-ud-Daula, the Nawab of Awadh, and the Mughal Emperor Shah Alam II on 22 Oct, 1764. In May 1765, Lord Clive became the Governor of Bengal for the first time.

In Apr 1766, Maharaja Krishnaraja Wodeyar II passed away and since he had no sons, Hyder nominated a boy of his family, who assumed the throne under the title of Nanjaraj Wodeyar.