Posted onAugust 07, 2014
You history lovers must have seen the 2008 Hindi movie Jodha Akbar, starring Hrithik Roshan and Aishwarya Rai. People think that Jodha (that's not her real name) was the only wife of Emperor Akbar and he loved her very much. I could find some interesting questions on Answers.com, like; "How did Akbar met Jodha Bai", "How many children did Jodha and Akbar have" and the list goes on. This post is about Akbar's wives.

Ruqayya Sultan Begum was the first wife of Akbar. She was the daughter of Hindal, Humayun's younger brother. She had no children.

Salima Sultan Begum was the daughter of Gulrukh Begum, a sister of Humayun. She was married to Bairam Khan in 1557. After the death of Bairam Khan, Akbar married her in 1561.


Raja Bharmal of Kachwaha dynasty was the ruler of the small kingdom of Amber, also known as Amer (now in Jaipur) from 1548 to 1574. During the first year of Akbar's reign (1556), Majnun Khan, governor of Narnaul, informed him of the loyalty of Raja Bharmal which he had shown at the siege of Narnaul (After the death of Humayun, Haji Khan, a commander of Sher Shah Suri, had besieged Narnaul). Raja Bharmal and his family were invited to the court at Delhi and were rewarded with robes of honours. At the time of their dismissal, Akbar was seated on a wild elephant, which got restive and rushed forward. People moved to one side. Once when it ran towards the Rajputs, they didn't move but still stood firm. This loyalty of Rajputs pleased Akbar very much. 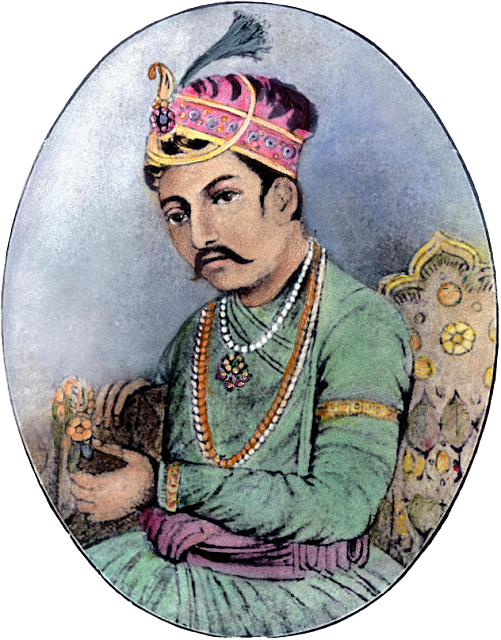 On 14th January 1562, Akbar set off to Ajmer to visit the mausoleum of Shaikh Muin-ud-din Chishti. On his way to Ajmer, Chagatai Khan, one of his intimate courtiers, reminded him of Raja Bharmal and informed that the Raja had taken refuge in the hills since Sharaf-ud-din Husain, governor of Mewat, had made war upon Amber at the instigation of Suja, son of Raja's elder brother Puran Mal. Sharaf-ud-din's intention was to take procession of Amber for himself. Raja Bharmal was defeated and he was agreed to pay tribute. Sharaf-ud-din also demanded the Raja's son Jagannath, and Raj Singh & Kangar, the sons of the Raja's brothers Askaran and Jagmal, as hostages. Now that Sharaf-ud-din was preparing to invade Amber again and the Raja requested Akbar's protection. He visited Akbar's court at Sankanir and paid his respects. He was most honorably received by Akbar and his request 'to enter into Akbar's service and to strengthen the ties of friendship by a matrimonial alliance' was granted. On the order of Akbar, Sharaf-ud-din surrendered Jagannath, Raj Singh and Kangar to Akbar and afterwards they were immediately sent to the Raja. Thus on January 20, 1562, Akbar married Heera Kunwari, Raja Bharmal's daughter at Sambhar. Raja Bharmal was made a Commander and his heir Raja Bhagwan Das and grandson Raja Man Singh were also given high positions in the Mughal court.

Was Raja Bharmal's Daughter the Mother of Jahangir?


Heera Kunwari, the eldest daughter of Raja Bharmal of Amer, was the first Hindu wife of Akbar [but not the only Hindu wife]. Now let's check Jahangirnama (Tuzuk-i-Jahangiri or the Memoirs of Emperor Jahangir):

Jahangir never mentions the name of his mother in his Memoirs but, always address her with the title 'Maryam Zamani'. Following few lines from Jahangirnama proves that Heera Kunwari (daughter of Raja Bharmal) was not the mother of Jahangir:-

Firstly, see Jahangir's account of Raja Man Singh (Rogers' translation), "I made Raja Man Singh - who was one of the greatest and most trusted noblemen of my father, and had obtained alliances with this illustrious family, in as much as his aunt had been in my father's house, and I had married his sister (Man Bai) - as before, ruler of the province of Bengal. His father was Raja Bhagwan Das. His grandfather Raja Bharmal was the first of the Kachwaha Rajputs to have the honor of entering my father's service, and he excelled his tribe in truth and sincerity of friendship, and in the quality of valor".

According to the translation of Wheeler Thackston, "Raja Man Singh, one of my father's trusted and important amirs, had various relationships and kinships to this glorious family. Since he was constantly in my father's house, I myself proposed marriage with his sister, who gave birth to Khusrau and his sister Sultanu-n-nissa Begum, my first child". If Raja Man Singh's aunt was his mother, Jahangir would have defenitely mentioned it.

Secondly, we are told by the historians that, Salim's (Jahangir) rebellion, had made Akbar to declare his grandson, Prince Khusrau, his successor. At that time, Raja Man Singh had supported Khusrau since he was the son of his sister Man Bai (who was given the title of Shah Begum by Jahangir). This confirms that Jahangir was not the son of his aunt Heera Kunwari.

Other Wives of Akbar:

Bibi Daulat Shad, another wife of Akbar, was the mother of his two daughters, Shukr-un-nisa Begum and Aram Banu Begum. Akbar made matrimonial alliances with many other Rajput princess as well (two exceptions were Mewar and Ranthambore. Maharana Pratap never submitted to Akbar. Rao Surjan Hada offered his submission but refused to give his daughter in marriage to Akbar). We do not have the information of the mother of Akbar's twins, Hasan and Husain (they died after one month). In Tuzuk, Jahangir says that Shahzada Khanum (eldest daughter of Akbar), Murad (second son of Akbar) and Daniel (third son of Akbar) were born to royal concubines.

It was a law of the Mughals that if the emperor desired a woman, her husband should divorce her. Thus Akbar married the beautiful wife of Abd-ul Wasi.

Who was Maryam Zamani?

Maryam Zamani was the title given to one of Akbar's wives, who was the mother of Jahangir. We came to know about such a title from the Jahangirnama only. Except Jahangir, no contemporary or later historians have called her with this title. No chronicler mentions the real name of Jahangir's mother: Abul Fazl, "the matrix of the sun of fortune"; Ferishta, "the favorite Sultana"; Nizamuddin Ahmad, "one of the consorts". Bada'uni states that the mother of Jahangir was an imperial princess, "In this year one of the imperial wives became with child, and he (Akbar) went to beg the intercession of Shaikh-Salim Chishti living at Sikri, and he left his Empress at the monastery of the Shaikh".

Jahangir never calls Maryam Zamani "my mother", but always address her as Her Highness and Hazrat. Though he gives the names of many of his father's wives, he never revealed the identity or real name of his mother. Maryam Zamani died at Agra in 1623. At her death, Jahangir made a simple remark, "On this day news came from Agra that Her Highness Maryam Zamani, by the decree of God, had died. I trust that Almighty God will envelop her in the ocean of His mercy". 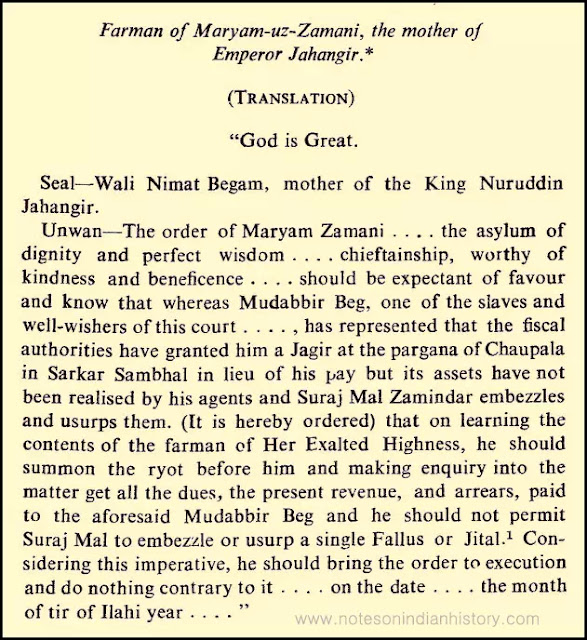 Anyway, Jahangir was deeply attached to his foster-mother*, who was the daughter of Shaikh Salim Chishti. "When I was an infant I was looked after by her. The intimacy I have with her I do not have with my own mother. She stands in the place of an affectionate mother to me". When she died in 1607, Jahangir was 'very grieved and depressed, that he lost his appetite for several days and did not change his clothes'. "She had given me milk in my mother's stead — indeed, she was kinder than a mother — and I had been raised from infancy in her care. I took one of the legs of her bier on my own shoulder and carried it a bit of the way", says Jahangir.

Who was Jodh Bai?

Jagat Gosaine, daughter of Motaraja Udai Singh of Jodhpur, better known as Jodh Bai, was the wife of Jahangir and mother of Shah Jahan. Rukmawati Bai, also known as Jodh Bibi, was the sister of Motaraja Udai Singh (daughter of Rao Maldeo) and wife of Akbar. Colonel James Tod in his 'Annals & Antiquities of Rajasthan' says that Motaraja bestowed his sister Jodh Bai on Akbar. He was actually referring Rukmawati Bai.

*It was a custom among Mughals to employ wet-nurses (Anka) to feed their babies, and in whose care the child was brought up. Foster-mother was considered closer than that of the biological mother. Same applies to foster-brothers (koka). The child's foster-father (atka: husband of foster-mother) was also a most important person in his court.