Posted onDecember 11, 2014
Chand Bibi (The Lady Moon) was the daughter of Sultan Hussein Nizam Shah of Ahmednagar (in Maharashtra, India) and his wife Sultana Khanzada Humayun. Chand was married to Sultan Ali Adil Shah of Bijapur, when the four Deccan Sultans (Ali Adil Shah of Bijapur, Hussein Nizam Shah of Ahmednagar, Ibrahim Qutub Shah of Golconda and Ali Barid Shah of Bidar) had united against Rama Raya of Vijayanagara, during the Battle of Talikota in 1565. In 1580, Sultan Ali Adil Shah was murdered by an eunuch; and since he had no sons, he was succeeded by his nephew Ibrahim Adil Shah II (1580-1626), a child of nine years. Chand Bibi became the regent during his minority from 1580 to 1584. When Khudija Sultana, sister of Ibrahim Adil Shah, was married to Miran Hussein, son of Murtaza Nizam Shah (the then ruler of Ahmednagar and brother of Chand Bibi), Chand Bibi also accompanied the bride to Ahmednagar, and remained there.

Events in Ahmednagar: By 1591, Mughal emperor Akbar had asked all the four Deccan sultanates to acknowledge his supremacy. After the death of Ibrahim Nizam Shah (he was assassinated by Ibrahim Adil Shah II) in 1594, Mian Manju Deccani, his minister, imprisoned Ibrahim's infant son Bahadur, and placed Ahmad Shah, a descendant of Nizam Shah, on the throne. When the Abyssinian nobles discovered that Ahmad was not a lineal descendant of Nizam Shahi dynasty, they refused to acknowledge the new king and rebelled. Unable to oppose this, Mian Manju invited Prince Murad (son of Akbar), who was in Gujarat at that time, to assist him and also promised him to surrender the fort. Akbar had already given orders to Prince Murad and Abdur Rahim Khan-i-Khanan to march to Deccan. But what happened was that, while Murad was on his way to Ahmednagar, Mian Manju had successfully suppressed the rebellion. He now regretted for having invited the Mughals to invade Ahmednagar. Mian Manju requested Chand Bibi to take command of the fort and himself marched towards Bijapur with Ahmad Shah.


Chand Sultana and the Mughals: 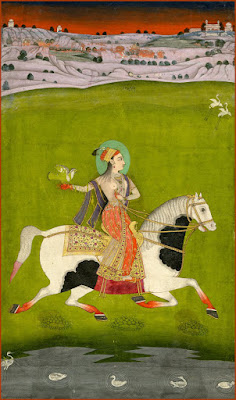 Cession of Berar: Prince Murad and the Khan-i-Khanan reached Ahmednagar and laid siege to the fort by Dec 1595. Chand requested help from Ibrahim Adil Shah and Muhammad Quli Qutb Shah of Golconda against Mughals. When Murad learned this, he ordered the capture of the fort as soon as possible; and within few days, five mines were constructed around the fort. It is said that Khwaja Muhammad Khan Shirazi, a Mughal noble, informed Chand about Murad's plan. Chand herself with the assistance of some nobles, dig out and destroyed two of the mines. Others were still in the process of digging out rest of the mines. At this time, the Prince ordered to blow up the mines, without informing the Khan-i-Khanan. Murad was in fact jealous of the Khan-i-Khanan; he wanted the sole credit of capturing Ahmednagar. Three of the mines were exploded. Many of the counter-miners were killed and a part of the fort was broken up. People began to flight. The Queen, on the contrary, put an armour, and with a veil on her face and a sword in her hand, flew to defend the breach. Seeing the braveness of their Queen, the people who fled, came back and joined her. According to Ferishta, Chand Bibi caused guns to be brought to bear on the assailants, and stones to be hurled on them, so that they were repulsed in several repeated attacks. During the whole night, she supervised the repairs of the breach and it was built up to the height of eight feet before daylight. On the next day, she dispatched letters to Adil Shah and Qutub Shah to hasten the arrival of their forces, and some of them fell into the hands of Murad. The Mughal army was already suffering due to lack of provisions. Seeing these letters, they became more distressed. At this situation, Prince Murad decided to negotiate with her. As per the treaty, she surrendered Berar to the Mughals (Feb 1596).

Chand Sultana, Regent of Nizam Shahi Sultanate (1595-1599): After the retreat of Mughals, Mian Manju again came up with Ahmad Shah. Chand Sultana, with the help of her nephew Ibrahim Adil Shah, quelled Mian Manju's revolt. At Bijapur, Ibrahim Adil Shah gave an estate to Ahmad and also enrolled Mian Manju as a noble of Bijapur. Chand now proclaimed Bahadur Nizam Shah (1595-1599) as the new Sultan and became his regent. She appointed her adviser Muhammad Khan as the Viceroy. Gradually the Khan usurped the authority of the whole Kingdom and promoted his relatives to chief offices. Hearing this, Ibrahim sent his general Sohail Khan for her assistance. After the capture of Muhammad Khan, she appointed Abhang Khan, an Abyssinian, as the new Viceroy. 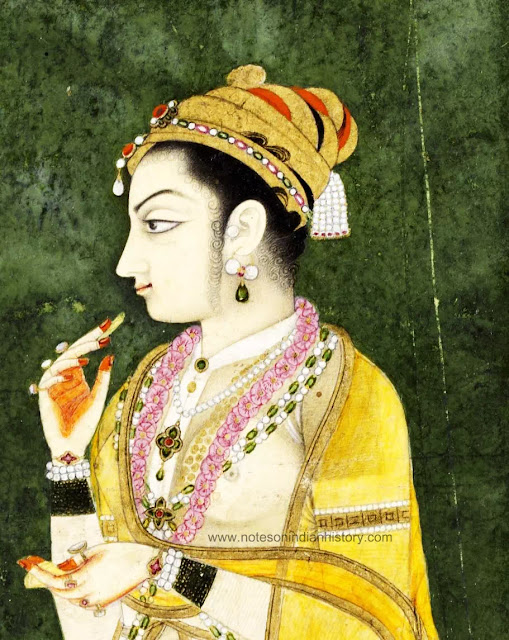 Defeat of the Deccan Confederates: On his return to Bijapur, Sohail Khan learned that the Mughals had captured many other territories also that were beyond the limits of Berar. Chand appealed to Ibrahim Adil Shah and Muhammad Quli Qutub Shah, asking them to unite against the Mughals; and the forces arrived accordingly. The Mughal forces under Mirza Shahrukh and Khan-i-Khanan met with the combined forces of Nizam Shahis, Adil Shahis and Qutub Shahis under Sohail Khan near Sonpet on the banks of River Godavari in Feb 1597. The battle lasted for two days, and in this fierce battle, Sohail Khan was defeated. Murad sugegsted that they should march immediately to occupy Ahmednagar, but the Khan-i-Khanan replied, that there were still many strong forts in Berar to be taken, and advised him to wait till the following year for the invasion of Ahmednagar. Murad wrote complaints to his father Akbar at Delhi, who recalled the Khan-i-Khanan and deputed Abul Fazl to the commander-in-chief of the army of Deccan.

In the meanwhile, the new Viceroy Abhang Khan, who had now obtained unlimited power in the Kingdom, was making plans to remove the Queen and took the regency in his own hands. Suspicious of his acts, Chand removed him from the position of Viceroy. Offended by this, he turned a rebel. Ibrahim Adil Shah tried to effect a reconciliation between them, but didn't succeed. Abul Fazl was sent to Deccan to take charge of Berar. Taking advantage of the absence of Khan-i-Khanan, Abhang Khan sent an army to retake Bir from Mughals. About that time Prince Murad died (1599). Akbar dispatched Prince Danyal (youngest son of Akbar) attended by the Khan-i-Khanan to Deccan. Abhang Khan raised the siege and marched towards Jaipur Kotly Ghat, to oppose the Mughals, but, the Prince reached Ahmednagar taking another route. Unable to withstand the Mughals, Abhang Khan retreated to Ahmednagar and tried to compromise with Chand. Since she was not willing, he fled to Junnar.


According to Abul Fazl, Chand had sent letters to him inviting friendship and promised to surrender the fort after punishing Abhang Khan. As per the treaty she promised that she will accept Junnar as her fief and would accompany Bahadur to the court. Meanwhile Prince Danyal and his army laid siege to the fort and commenced mining. At this period she applied to Hamid Khan, an eunuch, for advice. He recommended to fight, but the queen declared that after seeing the misconduct of many of her officers within the past years, she could place no trust on them. She considered it most advisable to negotiate for the evacuation of the fort on a condition of no injury should be caused to the inhabitants of the fort. After that she will retire to Junnar with the young King. Hearing this Hamid Khan ran out into the streets and exaggeratedly spread her words that she was in treaty with the Mughals for the delivery of the fort. The Deccanis headed by Hamid Khan entered her apartment and put her to death. Thus ended the life of the brave Queen of Ahmednagar. The Queen was very fond of hunting. The painting of "Chand Bibi Hawking" is very famous.

Akbar Finally Captures the Fort: After the death of Chand Sultana, Ahmednagar fell into the hands of Mughals by Aug 1600. Bahadur Nizam Shah was taken as prisoner and sent to Akbar at Burhanpur. At the same the fort of Asir also fell. After appointing Prince Danyal as Viceroy of Deccan, he returned to Agra.
Share
2 comments
Labels#Bahmani/Deccan Sultans, #Mughal
Newer
Older