Posted onJanuary 22, 2015
Mandu, the erstwhile capital of Malwa (in Madhya Pradesh), is famous as the city of two great lovers, Baz Bahadur (meaning: the brave falcon), the Afghan King of Malwa, and his beloved wife Rupmati. Queen Rupmati is famous in her chaste devotion to Baz Bahadur.

Rupmati was also a musician, singer and poetess. Baz Bahadur was deeply attached to her and used to compose Hindi verses in her name. He is said to have assembled around him nine-hundred dancers and singers. 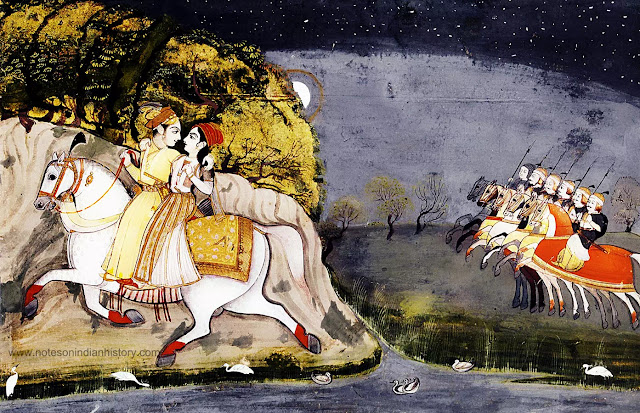 Love Story of Rupmati and Baz Bahadur: According to folklore, Rupmati was a Hindu Rajput princess of Dharmpuri. The beautiful and accomplished daughter of Than Singh. One day Baz Bahadur came to the valley of river Rewa (also known as Narmada) for hunting. While he was pursuing a deer, his ear was attracted by a melodious voice. He followed the sound and reached the spot where Rupmati was singing and playing bin (a musical instrument). Dazzled by her beauty and enchanted by her magical voice, he wished to take her to Mandu. She replied: "When the Rewa shall flow through Mandu, I will be your bride, but not till then". Thus Baz Bahadur built the Rewa Kund, a beautiful reservoir, at Mandu. When Rupmati's father heard of these doings, in pride of their caste wanted her to take poison. She thus chanted the song of death. It is said that as she had finished the song and was about to drink poison, Baz Bahadur rode up and took her to Mandu after defending her father. 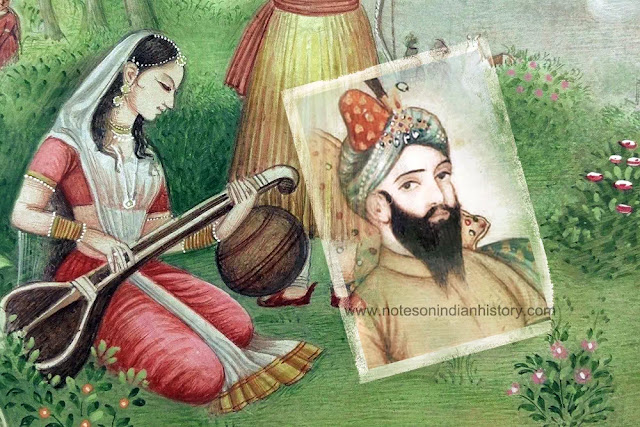 The history of Rupmati, 'The Lady of the Lotus: Rupmati Queen of Mandu', was written in the 43rd year of Akbar's reign by Ahmad-ul-Umri. According to Ahmad-ul-Umri, Rupmati was the daughter of Jadu Rai, a Brahman belonged to Sarangpur. The story begins during the reign of Shujaat Khan. Bayazid had got the province of Sarangpur as Jagir from his father. With Jadu Rai Bayazid was joined in friendship. One day Jadu Rai invited him to his house and arranged a great feast. At the feast, his eyes fell upon Jadu Rai's beautiful daughter Rupmati. Bayazid had learnt of her beauty from one of his companions and his heart was entangled in the net of love. When Baz Bahadur became the Sultan of Malwa, he bestowed upon Jadu Rai, much gold and the province of Sarangpur, and asked his daughter in marriage to him. Ahmad-ul-Umri says that Jadu Rai himself gave his daughter in marriage to him, but 'as no marriage ceremony was performed, she was looked upon as a mistress and not as a legitimate wife'.

When Rupmati entered the harem of Baz Bahadur, the magic of her love held him in such enchantment that he passed his days in her company, abandoned himself to luxury and pleasures.

Her perfection in the art of music so ravished Baz Bahadur that he permitted the government of his kingdom to dance at her finger tips....

She had so captivated him that every moment not spent with her was painful to him...

He so entirely neglected the state affairs, that many military persons left him, and the subjects began to make seditious movements.

By this time, a series of events have occurred in Indian history: Humayun's return to India, his death and accession of Akbar (r: 1556-1605). When the news of Akbar's victories reached Mandu, Rupmati advised her lover to give up pleasure and take effort to set the affairs of the kingdom in order.

In 1561, Akbar sent his generals Adham Khan Koka (Akbar's foster-brother, son of Maham Anaga) and Pir Muhammad against Malwa. Baz Bahadur marched to Sarangpur to oppose them, but was defeated and fled.


Before leaving for the battlefield, he had ordered his attendants to kill the women of his harem in the event of his defeat. When the news of Baz Bahadur's defeat reached the attendants, they started murdering the women. But before they could complete this task, the Mughal army entered the palace. The attendant of Rupmati struck a few blows on her but before she could be killed she was rescued by the Mughal army.

All the treasures of Baz Bahadur, including the women of his harem, fell into the hands of Adham Khan. Adham Khan had Rupmati's wounds dressed and recovered. It is said that she permitted her wounds to be dressed on receiving a promise that she should be sent back to Baz Bahadur. But Adham Khan's real intention was to keep her for himself. He summoned her to his presence and demanded to transfer her love to him. Rupmati tried to advise him, "It did not become the glory of the conqueror thus to seek to disgrace the name and fame of the broken Afghans: for in the day of recompense heaven might bring down that very shame on the head of the conqueror". Adham Khan decided to use force to get her. When heard of Adham Khan's plan, she thought means to escape. She disguised herself as a flower-seller and fled from the palace. When Adham Khan learnt of her flight from the palace, he sent his cavalry to capture her.

In spite of lots of difficulties, Rupmati reached Sarangpur to seek help from her brothers. (Her father  Jadu Rai was already dead and her mother had become the wife of her husband's brother). In the following engagement, Adham Khan's men killed her brothers and took her back to Mandu. In the palace she was carefully guarded and strictly watched. She said, "My heart is tired of these your proposals. There is no hope that, what I gave to Baz Bahadur, the same I should give to you; to you, above all, who do commence your wooing by the murder of my brothers".

"O victor mine, the conquered have no resource save to obey the orders of the conqueror. They whom fate has broken need no fresh enemies. Modesty and repute, honour and respect are transient things. Yet is it the custom that the conquerors show generosity to the conquered. My glory is my union with Baz Bahadur. Through love of him I have sung in his assemblies and to the doing of love be it set down that Baz Bahadur sought from me such proofs of affection. Now I pray you, the master, to show mercy on me, the slave. None know what the morning will bring forth from out the night. Behold the end of this empire and the fall of our fortune, how my state is like unto them as a reflection in a mirror. You say in your heart, I have attained unto the heaven of power, yet fear you the grinding of the revolving millstone.

It were but just that you should send to tell the tale of us poor wretches in the ear of emperor Akbar, for of a surety on hearing of our misery he will not refrain from tears. Abandon then this your evil purpose.

O Adham Khan, beauty and grace you say are mine, yet of what avail will these be to you? for with me they will turn to dust. My brothers are dead, nor is it for me to crave for this life of a day. The imperial throne whence sprang our content has fallen in the dust, and all my brothers have perished to preserve my wretched life. I pray that therefrom your noble heart may learn a lesson and that you will leave us miserable creatures in peace", she wrote to Adham Khan.

"Though the four quarters of the world unite to rob me of union with you, yet I will make sacrifice of all my earthly bliss, of all my hopes of Paradise and of all that therein is, for one minute of your love", Adham Khan replied.

When she realized that there is no way to escape, she promised to become his wife after three days. She said that within that time her sorrow would lessen.

Rupmati saw no chance of reunion with Baz Bahadur. On the third night, she adorned herself in the very bridal dress which Baz Bahadur had given her. She took her bin and sang songs of sorrow for some time. After this she went to the bridal chamber and took poison of powdered diamond. Thus died Rupmati, a martyr to faithfulness.

Account of Other Historians Regarding the Death of Rupmati:

Abul Fazl: "Adham Khan sent people to search for Rupmati. When this news reached her ear her faithful blood became aglow, and from love to Baz Bahadur she bravely quaffed the cup of deadly poison and carried her honour to the hidden chambers of annihilation!"

Nizam-ud-din Ahmad: "At the time of the rout the eunuch of Baz Bahadur wounded Rupmati with his sword; so that she might not fall into the hands of strangers. When Adham Khan summoned her, she, to preserve her honour, took poison and killed herself".

Nimatullah - Dorn: "Rupmati, being brought before Adham Khan, covered with wounds, he took all possible care to have her cured, as well as the other wounded. But when Rupmati's wound had closed up, she swallowed camphor, and thus put an end to her existence".

What happened to Baz Bahadur?


"Baz Bahadur and Rupmati lie buried together. Their tomb stands in the middle of a tank in Ujjain", says Blochmann, the translator of Ain-i-Akbari. But there is no trace of any tomb at Ujjain. L.M. Crump state that Rupmati's grave is at Sarangpur. "Baz Bahadur's last wish was to be laid by her side on the island at Sarangpur, where she had awaited his coming for many long and lonely years. There each by other they yet sleep, those two great lovers once more united, the Lady of the Lotus and her Lord, in the middle of the lotus-spread waters", he writes.

In a note to the Legend of Mandoo, Capt. Abbott writes: "At Saharangpur in Malwa, her tomb is preserved. The natives fondly believe that if any one call at that tomb 'Roop-Mati', the echo renders 'Baz Bahadur'". Alas! today the dome has fallen and there is no echo.

According to Dorn, Baz Bahadur is buried at Agra near Alam Ganj.

It seems that Rupmati became Baz Bahadur's queen without formal conversion to Islam.

The Lady of the Lotus: Rup Mati Queen of Mandu-a Strange Tale of Faithfulness By Ahmad-ul- Umri, Translated by L.M. Crump